San Antonio's offensive explosion in Game 3 wasn't due to big, major changes. It was due to a bunch of small adjustments that added up to big things.

Share All sharing options for: How the Spurs put together the best offensive half in NBA Finals history

Over the course of a seven-game series, we get an excellent opportunity to see both teams make a series of both large and small between-game adjustments. This is the constant chess match between coaching staffs, recognizing what your opponent is doing well as they try to position their team on the way to calling "checkmate."

Most fans think that as the coaches pore over the previous game's video tape evidence, there is a eureka moment when the coaches discover their opponents' glaring weakness. It usually doesn't happen like that. Few teams have that chessboard kryptonite that you can hop on like Garry Kasparov playing the neighborhood guys in speed chess down at the park.

The majority of adjustments a team makes heading into the next game are small and based on things like slightly moving over a specific pick-and-roll or changing an individual matchup. Maybe the coach massages the pick-and-roll defense or finds a new point of attack to initiate the offense. Hopefully, all of these changes are like pawns: small moves that eventually add up to the point where a team can move its major pieces in for the kill.

As rumors about another superstar and innuendo flew around around South Florida, the present never felt so real even as the future seemed so attainable. Leave it to Chris Bosh to put things back into focus.

Stop giving the Spurs all the credit for Kawhi

Two things seem to get most of the credit for Kawhi's stardom: his hands and the Spurs. By doing this, we sell Kawhi himself short.

After poring over the Game 2 video, San Antonio made a series of small adjustments that added up to the most explosive first half of Finals basketball that I've ever seen. The key adjustment? Shoot 19-of-21 coming out of the gate on the way to 71 first-half points (on only 33 shots). Shooting really, really well: now, that's a solid strategy. Gregg Popovich and staff are geniuses!

Obviously, that type of unconscious shooting will always win out over even the biggest defensive adjustment. But separate from the video game numbers, the Spurs actually tweaked a few things that paid off.

Popovich mixed things up right off the bat by starting Boris Diaw in Tiago Splitter's place. While this technically might not be a "small" lineup, it provides San Antonio with extra "perimeter" skill in its starting five without sacrificing size. Diaw is among a small group of elite passers in the NBA, and he also has an extremely high basketball IQ. By starting Diaw, the Spurs had a versatile power forward who can stretch the floor, post up smaller defenders, draw a double team and always find an open teammate at the three-point line. It also helped that Popovich could rotate Diaw over to LeBron James defensively if needed.

With this more dynamic offensive unit, San Antonio also focused on moving the ball with the pass more than it had through the first two games. When we look at how much the Spurs swing the ball and keep it on the move, it is hard to imagine how they could possibly move the ball more than normal. But they did, on many occasions using at least six passes to make a bucket. By constantly moving the ball from side to side, San Antonio forced Miami to make multiple defensive efforts on each possession.

The Spurs were consciously moving the ball even more than normal, almost to the point of over-passing. They basically told the Heat, "Just try and keep up!"

The first possession of the game is a perfect example of San Antonio's determined adjustment to move the ball even more via the pass.

After a typical wing entry pass, the Spurs executed a little scissor cut off Tim Duncan at the foul line. Duncan then popped up and received a reversal pass in the center of the court. Two pindown screens and a pass to Tony Parker later, the Spurs ran a pick-and-roll in the "slot" area, which led to a dish to Boris Diaw. The Frenchman measured the Heat defense before adroitly shoveling a pass to Duncan for the bucket.

This was ball movement through passing into a well-executed pick-and-roll, followed by penetration with the pass. The first possession was a harbinger of things to come.

As the first quarter wound down, the relentless Spurs passing attack continued with a combination of both starters and bench players. A six-pass possession, constantly moving the Heat defense, ended with Patty Mills driving the baseline with a Steve Nash-like probe. The Spurs' constant movement pre-drive totally threw the Miami defense off its game.

Mills got to the spot under the basket and began to look for spaced three-point shooters. But after Tiago Splitter's drive to the hoop, Manu Ginobili recognized the open space and dove right on the Brazilian's tail. Mills hit Ginobili in stride and finished with an awkward-looking right hand. Yes, his right hand.

The finishing move for the bucket was set up long before Ginobili cut by the constant lateral passing movement of the Spurs attack. This was a small adjustment that made a big difference.

The Spurs also made a couple of changes to their pick-and-roll game. On the high pick-and-roll, they moved the point of attack away from the imaginary line running down the middle of the floor to a few feet into the slot, which is the 8-foot section of the floor between the wing and the middle of the floor. By attacking to the side a few feet over, this forced Miami's third defender (quite often LeBron James) to make a decision between staying and physically tag the rolling big man -- Tim Duncan -- or jumping the gun and closing out to the corner/wing shooter -- the red-hot Kawhi Leonard. 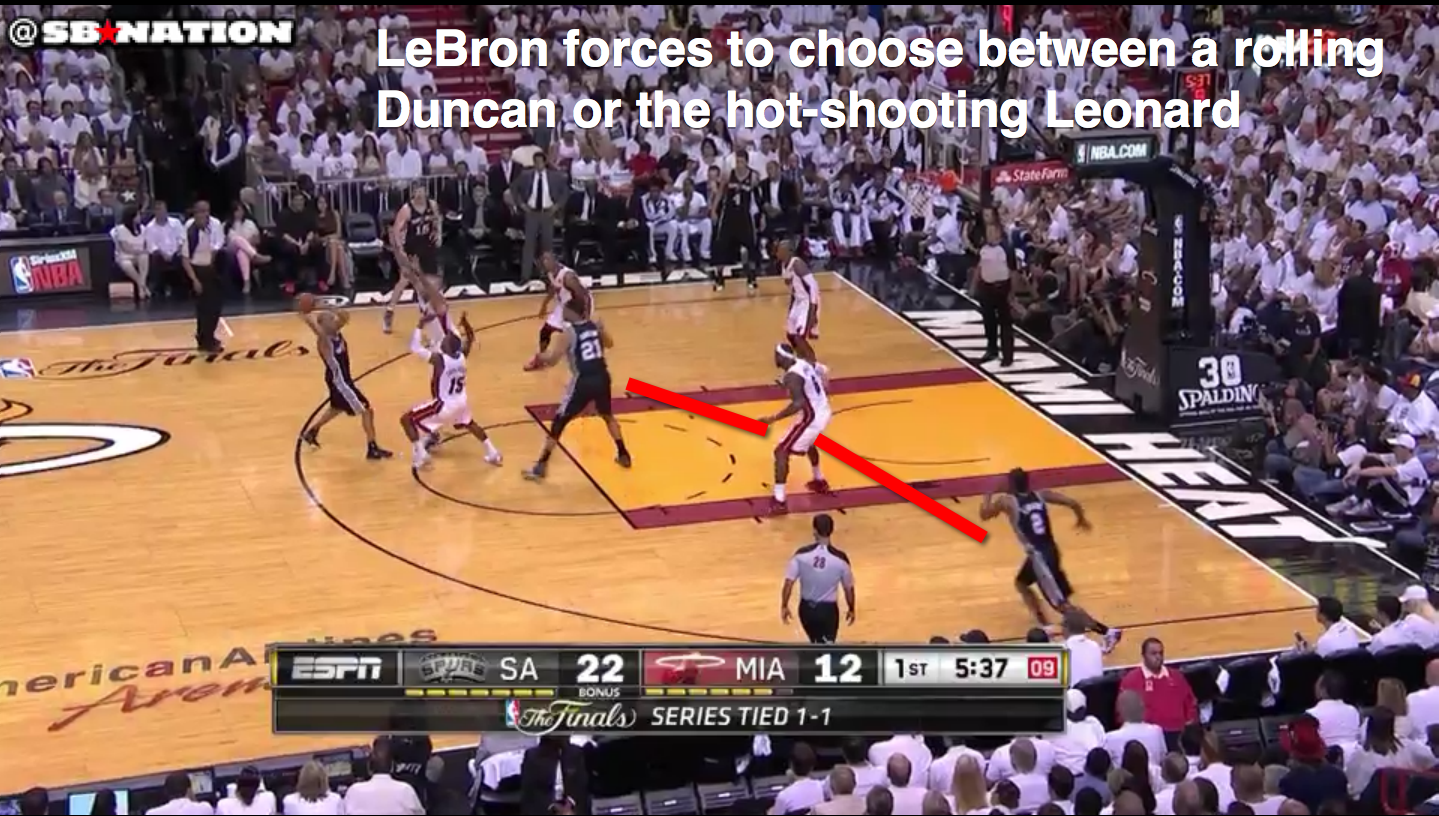 Also in the pick-and-roll game, the Spurs concentrated on using two screens whenever possible. Whether it was using two big men on drag screens (explanation here) or two big men up top, San Antonio went with the theory that two screeners doubled the rotation questions for the Miami defenders.

When the Spurs needed to run an important high pick-and-roll, they would "twist" the action. This is sending two screens for the price of one. Tony Parker would rub his defender of an initial screen by say, Boris Diaw, and begin stringing out the gentler double team of the Heat. Then, as the second Miami defender retreated, Parker would reverse course and come right back to dribble the other way off a second screen by Tim Duncan. The goal? Put Miami in an early pick-and-roll rotation and then come right back and attack on the second action.

Unprecedented shooting, more passing and minor tweaks to the pick-and-roll offense equaled a Game 3 victory for the Spurs. Easy.

Now the question arises: what will the Heat's minor adjustments be to swing the bishops and knights back in their favor? Because right now, San Antonio's king is the one sitting pretty, staring down that NBA chessboard. It's up to coach Erik Spoelstra and staff to help Miami's King -- James -- make adjustments that will swing the series and the board back in their direction.