The Spurs aren't ready for retirement talk ... yet

When will it end for the San Antonio Spurs? It's a question that's been kicked around for almost a decade. We may know the answer soon.

Share All sharing options for: The Spurs aren't ready for retirement talk ... yet

SAN ANTONIO -- While speculation and rumors have been flying about the Miami Heat's future, the San Antonio Spurs have their own questions to resolve when the Finals are over. Tim Duncan has played coy with the retirement talk, but Gregg Popovich has been clear for a while that when Duncan walks away, he'll exit the stage with his longtime franchise player.

Duncan has an early termination option on the final year of his contract, and ESPN reported that he has until June 24 to tell the Spurs about his plans. Most option decisions take place around June 30 when the league enters into a moratorium before beginning the new business year, but Duncan's earlier call would give the Spurs a little more time to execute their offseason plan.

The team is in decent shape cap-wise, but Boris Diaw, Matt Bonner and Patty Mills will all be free agents this summer and Kawhi Leonard will be eligible for an extension. Mills is having a breakout season, going from towel-waving bench mascot to invaluable backup point guard, and he will attract a lot of attention in a thin free agent point guard class.

Basically all of this hinges on Duncan, but assuming the big guy wants to go another round, it seems pretty clear the Spurs will continue rolling right along as they always have. Popovich was asked about a succession plan now that his top assistant Mike Budenholzer has taken over in Atlanta.

"Are you trying to push me out the door?" Pop answered. "I don't feel tired. I mean, I'm tired today, but in general, I'd like to continue to coach."

"I hope he doesn't leave," Danny Green said before I even finished the question. "I don't like to think about it. I don't. I'm sure it's something that crosses everybody's minds at some point in the season. Right now we're not thinking about it. I hope Tim stays forever. As long as I'm here he makes my job a lot easier. He sets great screens, he plays great defense, I can just send guys to him defensively. I hope he stays here as long I'm here. I hope Pop does too."

While it's theoretically possible that this could be it for this group, it also stands to reason that they have at least one or two good years left in the tank. Popovich has expertly managed minutes during the regular season and the Spurs are as deep as any team in the league. 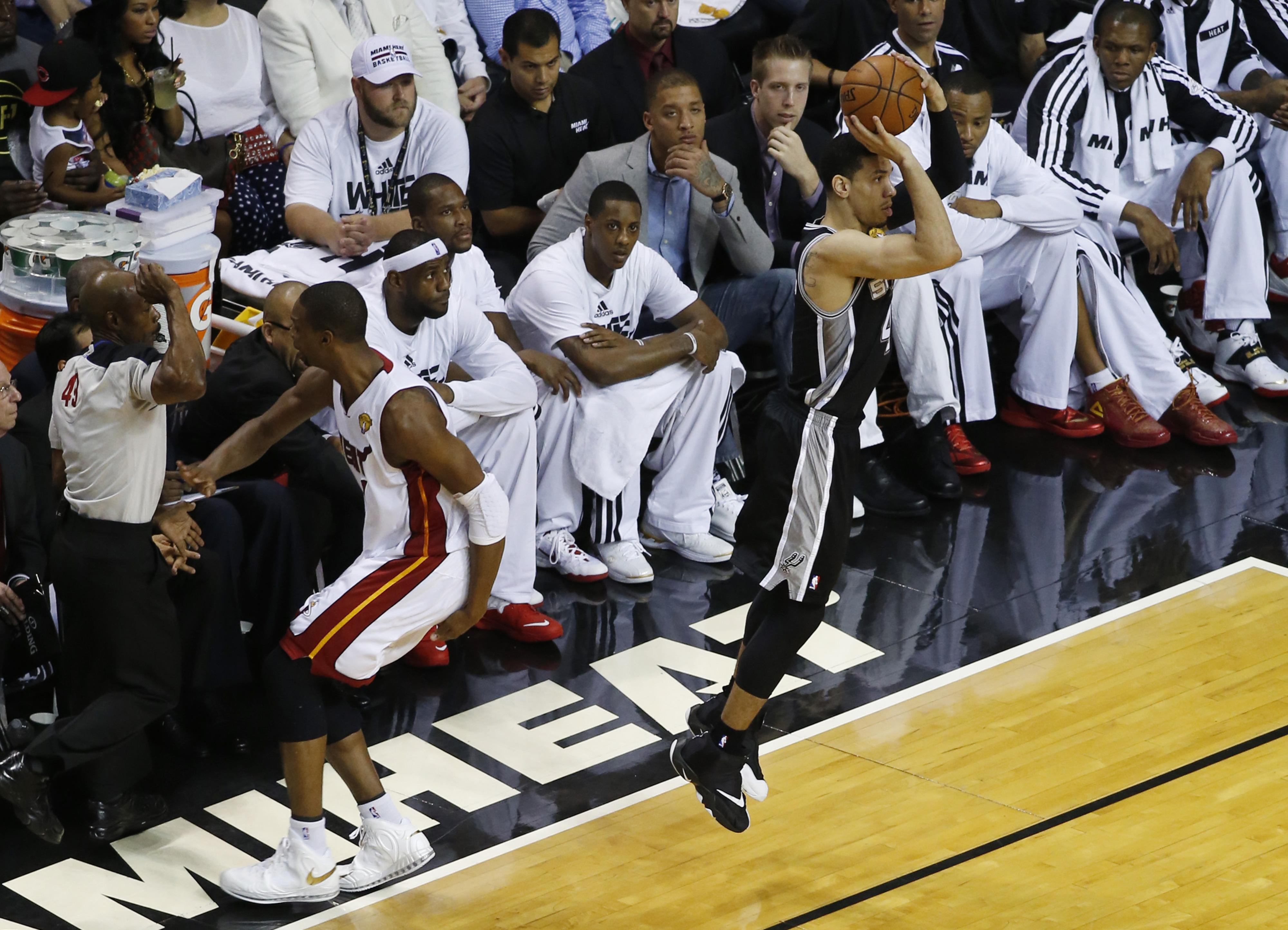 When adding up all the things they do better than everyone else, Pop's minutes plan is one of the more underrated aspects of their approach. Like most things, it's something teams often talk about doing, but let slide when the demands of the regular season begin to take precedence. It's no coincidence that the Spurs' core players have stayed fresher or that the bench players have developed so rapidly given Pop's deep regular season rotations.

"I heard it from Manu (Ginobili) a year or two ago," Green said. "He said his body was killing him and Pop is great at conserving guys and keeping their bodies fresh. After last year's performance and this year's performance. I don't see them not being able to do it for another year, so it would be nice."

It's an obvious storyline for this team that dates back years, when they slipped from their perch as the league's standard bearers. After winning their last championship in 2007, they were swept in the conference finals by the Lakers, beaten by the Mavs in the first round and fell all the way back to a 50-win campaign in 2010 before getting upset by Memphis in 2011.

Andy Lyons Call Tim Duncan unreadable, undecipherable and uncrackable if you want. But after 17 years, he's dropped a more than a few clues as to who he really is.

Which Heat team will show up?

What kind of performance will we see from Miami in Game 5? Will there be massive adjustments, or a better focus and attention to detail? There are many questions and some of them may even have answers.

Mystery of Tim Duncan revealed Which Heat team will show up?

"You've been saying that for the last seven, eight years, you know," Tony Parker said. "I don't know what to say. Every year just the journalists keep saying the same stuff that we're done and it's the last run. I totally understand. We're getting older every year, but we always come back and just keep pushing the limits, I guess, especially Timmy and Manu. We just keep playing great basketball. Our young guys are getting better and better. And right now we just have a great mix between young players and the veterans."

After the Memphis loss and the lockout, general manager R.C. Buford grabbed players like Diaw and Mills off the scrap heap, found a spot for Green (who was cut twice before sticking) and drafted Leonard while bringing Tiago Splitter further into the rotation. It is incredibly difficult to retool in this league, but Buford executed his plan almost flawlessly. That, combined with the coaching and emphasis on teaching and development from people like shooting coach Chip Engelland and assistant Chad Forcier, have kept the Spurs on track.

"Chad Forcier and Chip Engelland have been primary reasons for any success we've had in developing players," Popovich said. "They have a program where the guys come early, they stay late on a daily basis or every time we practice. They're really responsible for the skill sets of the individuals improving. Kawhi Leonard didn't shoot threes when he came here, you know, that sort of thing. Tony Parker's runner, you know, that kind of stuff. And every team works on this stuff, but those are the two guys for us that really get it done."

Given all that, who would ever want to leave? The Spurs seem to have created the perfect basketball environment around an unselfish superstar, a brilliant coach, a great supporting cast and an unparalleled development machine.

Still, everyone in San Antonio knows that it all comes back to Duncan. It always does.