The Louisiana-Lafayette point guard is shooting up draft boards, but is the hype justified?

With seconds ticking off the clock in the Sun Belt Conference Tournament semifinals, Louisiana-Lafayette point guard Elfrid Payton air-balled a potential clinching fall away jumper right into the waiting arms of Western Kentucky guard T.J. Price. The Hilltoppers' sharpshooter looked up at a dwindling game clock and rushed the ball up the floor.

A layup seemed likely. Instead, Payton sprinted in front of Price, met him at half court, then slid his feet all the way down to the baseline, sticking right to Price's hip. He kept his 6'8 wingspan extended to the sky and forced Price into an impossible runner.

The ball sailed over the rim as the clock expired, giving Louisiana-Lafayette the victory.

It was a quick sequence, maybe eight seconds, but it epitomized Payton as a player: He's a very bad shooter -- 26 percent from three, 61 percent from the stripe -- but a versatile and willing defender. Standing 6'3, he has good size for an NBA point guard and nice athleticism to match.

Payton can load up a box score. He averaged 2.3 steals (fifth on DraftExpress' Top 100), six rebounds and 5.9 assists per game, and scored the ball a ton, totaling a little more than 19 points per game and getting to the stripe nearly 10 times per 40 minutes. There's a reason he's shooting up draft boards and pushing to become a lottery pick.

But there are questions about how Payton's game will translate to the NBA after playing three years in the Sun Belt, one of college basketball's weakest conferences. In his junior season, he played against No. 23 Baylor and No. 7 Louisville during the regular season, and No. 3 seed Creighton in the NCAA Tournament. Payton averaged 18.7 points, 6.7 assists, 7.3 rebounds, 2.3 assists and three turnovers during those games, but only made 36 percent of his shots (18-of-50) from the floor.

Payton can get into the paint at will, even against elite competition, but it's tough to finish when defenses are playing you like this: 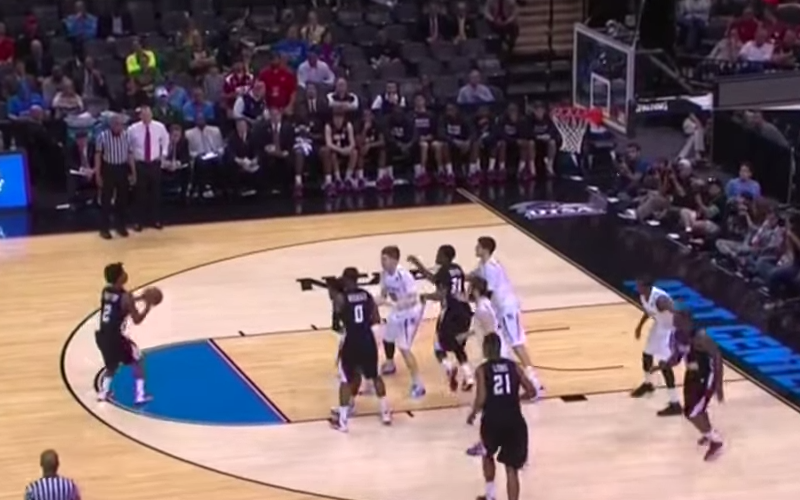 Throughout our profile series, we've used Phoenix Suns GM Ryan McDonough's method of scouting, as described to SB Nation's Paul Flannery. We take an in-depth look at three games: a prospect's best and worst performances, and another somewhere in the middle. That way, we can project his ceiling, understand his weaknesses and find a medium

Payton had more eye-popping numbers in other games -- a 34-point, 11-rebound, 11-assist, five-steal game against Louisiana-Monroe comes to mind -- but he played with a lot of poise in this Sun Belt Tournament game against WKU.

He started off a little rough, with two turnovers -- a poor post entry pass, then a loose drive to the hoop -- in the first two minutes. But after that, Payton was in full control, finding teammates in transition and off curl screens, and scoring on his own.

The Sun Belt Conference has some talent, but the size differential between it and major conferences is vast. Centers in the Sun Belt range anywhere from 6'5-6'8 and point guards are rarely over 6' tall. Here, Payton is an anomaly by towering over Sun Belt guards. Look at how he absolutely swallows WKU's Chris Harrison-Docks on this fast break layup attempt: 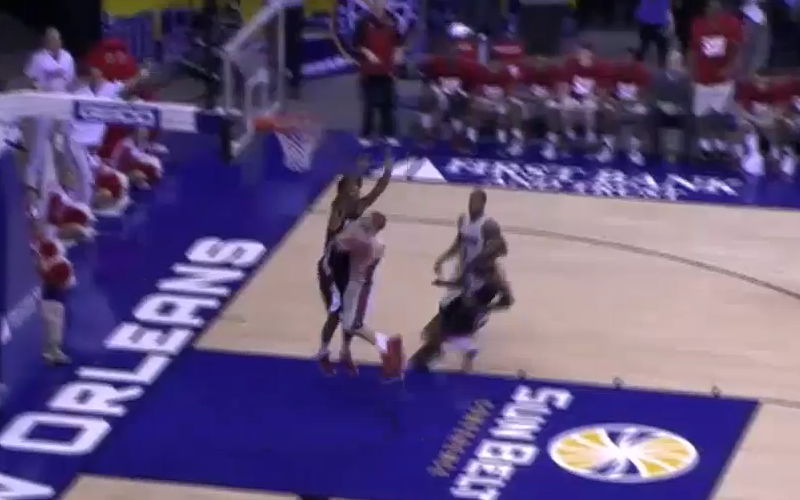 For the most part, Lafayette allowed Payton to roam on defense, letting him prowl for hard traps and steals in the passing lane. He made two huge defensive plays in the second half. The first was a steal in the passing lane, which led to a transition dunk:

The next was the biggest defensive play of his career, when he forced Price into a miss at the buzzer in the sequence described above

Payton has a number of advanced dribble moves. Here, he kills WKU guard Trency Jackson, one of the quickest guards in the conference, with a hesitation around a pick-and-roll:

On the next possession, Lafayette ran the same exact pick-and-roll set. This time, Jackson went under the screen to concede the jumper and Payton calmly sunk the pull up.

That jumper is important because it's one that Payton needs to learn to hit consistently. NBA defenses will sag on Payton anytime he has the ball, much like they do to Celtics point guard Rajon Rondo. In order for Payton to make them play honestly, he needs to be able to consistently knock down that mid-range shot, much like Rondo has slowly learned to do over the course of his career.

Payton scored in single digits just three times all season, but in the other two performances, he shot the ball fewer than seven times. Against UT-Arlington in the first game of the Sun Belt Tournament, Payton shot poorly from the floor. He also struggled to stay on the floor, picking up two fouls in the first two minutes.

When he was on the floor, UTA did not respect his jumper at all, playing him almost entirely like this: 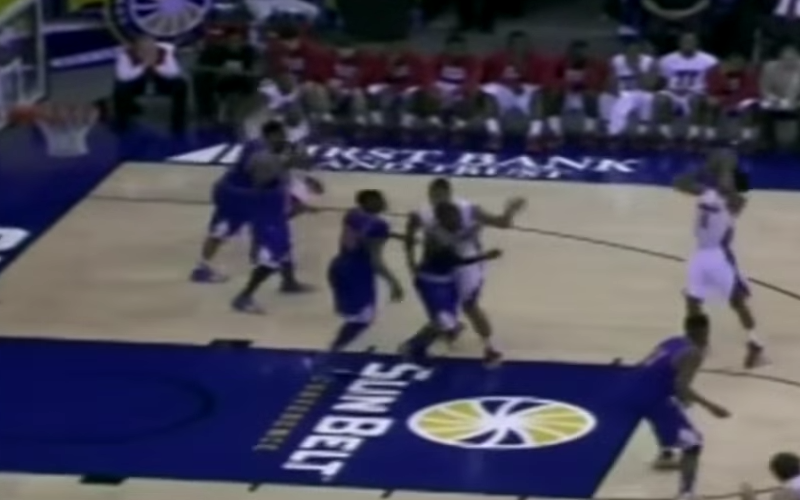 Almost every time Payton had the ball near the three-point line, his defender would play 3-4 steps back, nearly sagging to the paint. This is exactly how teams played him all year. He's a point guard, but he shoots the rock like a clumsy center.

He also has a tendency to be careless with the ball. Payton registered four turnovers per 40 minutes, the most among point guards in DraftExpress' Top 100. He turned the ball over five or more times in 11 games last season. That is not what you want to see in a potential lead guard.

Payton is a good ball handler, but he can get lackadaisical when he attacks the rim. He will bring the ball in low through traffic, right into the arms of waiting defenders.

Payton also struggled scoring at the rim this season despite having an obvious physical advantage on a nightly basis, finishing just 58 percent of shots around the rim according to DraftExpress. That's a very bad number for a guy with his physical tools, playing against competition that couldn't match his athleticism. It's not going to get easier against rim protectors like Roy Hibbert.

One of the problems is Payton's reluctance to use his left hand. He really wants to bring that bad boy back to his right hand.

He has the first man beat off the dribble and has a step on the second. All he needs to do is drop the right shoulder and attack the rim with his left hand. Instead, he hesitates and awkwardly floats back to his right.

This was Payton's worst game, but I still liked his versatility. He may have struggled from the floor, but he still registered five boards, six assists and a couple of blocks. He can do multiple things on the floor, even if he isn't scoring. That's important. With his unreliable jumper, he needs to find other ways to make an impact. At least he did that against UTA.

Payton showed a bit of everything in this performance: The ability to get the free throw line, a left-handed finish, struggles around the rim, steals, blocks and missed jumpers.

Early in the game, he drove to the cup, was loose with the ball and was ripped in traffic. Moments later, he flashed incredible anticipation on a cross court pass, forcing a turnover. Better not throw a lazy pass with Payton around.

He shakes his first defender, gathers in the paint and correctly jumps to the left side of the back board. But he doesn't try to finish with his left hand. Instead he floats out of bounds and pushes the ball over the rim with his right hand.

These are the types of buckets that Payton needs to finish. WKU forward Aaron Adeoye, a 6'6, below-the-rim athlete, gets in the way and throws off the shot, but Adeoye is nowhere near the rim protector that Payton will face on a nightly basis in the NBA. If Payton can't convert here, then what is he supposed to do when an NBA athlete gets in his way? That's a real concern.

Payton did a nice job of bringing his team back from a double-digit deficit. He was unstoppable in the open floor in the Sun Belt. In the second half, Payton pushed the ball in transition, demanded WKU's full attention and found open teammates on the perimeter twice in a row for three-pointers, but Louisiana-Lafayette didn't have the enough firepower to come back.

Payton has the size, length and athleticism to play point guard in the NBA. He's a willing defender with good hands, lateral quickness and anticipation. He's a skilled enough ball handler and passer to run pick-and-rolls, get into the paint and find shooters on the perimeter.

But he's extremely limited by his lack of a jump shot. If he can't score outside of 15-feet, he will cripple a team's offense, and he's just not a good enough finisher to make up for that lack of a jumper. In order to work him into an offense, he will need to be surrounded by a stable of shooters. Payton has a lightning first step and a good ability to change pace, but he has to develop a semblance of a jump shot before he can reach his full potential and be the lottery pick many teams hope.