Lance Stephenson cannot get out of his own way

Lance Stephenson is defined by his antics, off-court history and poor reputation even though he does some incredible things on the court. He has nobody to blame but himself for that.

Share All sharing options for: Lance Stephenson cannot get out of his own way

Before he was being described by local columnists as "the grand marshal of Indiana's clown parade" and before Udonis Haslem threatened his life and before every offensive possession became a referendum on both his character and his worth as an impending free agent, Lance Stephenson made one of the gutsier defensive plays you'll ever see made against LeBron James.

This was during the third quarter of Game 5 of the Eastern Conference finals, with the Pacers trailing the Heat by eight points and on the brink of elimination. Stephenson denied James' drive, poked the ball out of his hand and fought over the top of him to win a foot race for the loose ball. James was tagged with his fifth foul in the ensuing scrum and went on to have arguably the worst game of his career, finishing with more combined turnovers and fouls (eight) than points (seven).

The play galvanized Indiana, fueling a 31-15 advantage in a quarter that allowed the Pacers to extend their doomed season one more game. It will mostly be forgotten because of what happened next, which was no one's fault but Stephenson's.

They went all-in and failed. So now what?

The Indiana Pacers put all their chips on the table to win a championship this year. They'll feel the effects of squandering future assets to make that happen.

They went all-in and failed. So now what?

Midway through the fourth quarter, Stephenson blew into James' ear during a deadball and trolled his way into anti-legend status. You might not remember Stephenson for his rugged defense or the way he sporadically played like the only Pacer with a beating pulse, but you'll remember the memes. There was Stephenson blowing into a Super Ninetendo cartridge and pushing 50 Cent's first pitch astray. For all the good reasons to celebrate or revile Lance Stephenson, the catalyst wound up being a moment of annoying gamesmanship. Every good story needs a heel, and for the Heat, Stephenson was it.

Most other players would have been lauded for this type of fearlessness against Miami, but the Pacer guard couldn't help but make himself a punching bag even during a solid two-way series. It's been a theme throughout his career. As difficult as he makes it for his opposing number, Lance Stephenson always makes things hard on himself.

The NBA has seen its share of polarizing and idiosyncratic talents, from Dennis Rodman to Metta World Peace. Stephenson might be next in that royal lineage of instigators; he has already shown an uncommon talent for toeing the wrong side of the line. Everything is flipped for Stephenson, because of how he is perceived. For him, swagger is a pejorative and his reputation for being selfish is cemented even though he was sixth on his own team in usage rate.

Still just 23 years old, the story of Lance Stephenson is about to take its most dramatic shift yet as he prepares to enter unrestricted free agency. If you think people dislike Stephenson now, just wait until he's making more than $1 million per season. 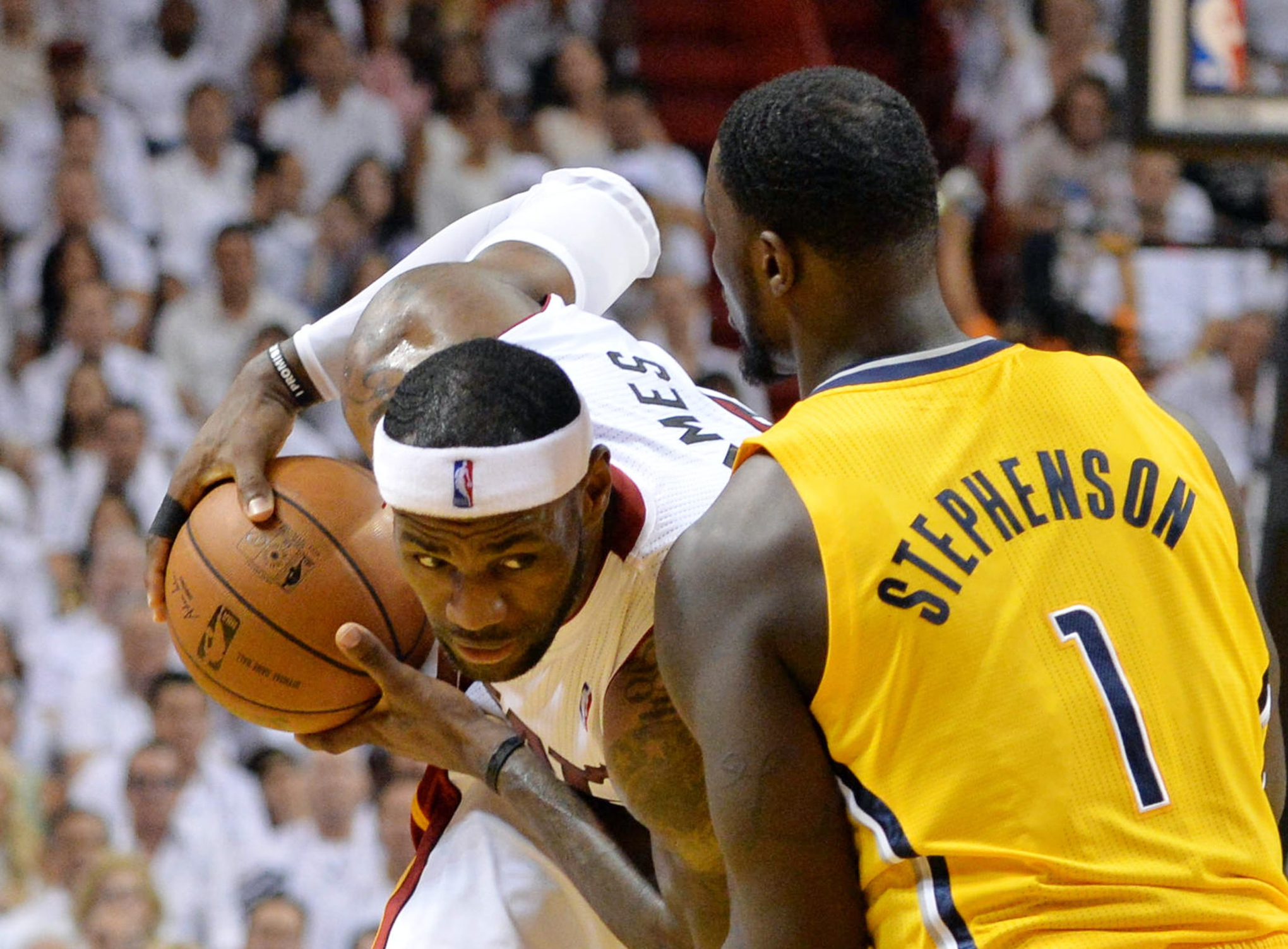 Being the center of attention is hardly a new phenomenon for Stephenson. He's been at war with the spotlight since he was 14 years old.

There are few things on earth like the hype surrounding a preordained New York City basketball star. It's a symptom of a city constantly striving for validation as the self-proclaimed mecca of basketball, and it's New York's media doing what it does, and it is loud and weird and heavy. Just weeks after he finished eighth grade, Stephenson was battling nationally renowned high school star O.J. Mayo, who was nearly three years older, on the AAU circuit. He graced  the pages of SLAM Magazine by the end of his freshman year. He was featured in Beastie Boy Adam Yauch's basketball documentary Gunnin' for That No. 1 Spot even though almost everyone else in it, like Kevin Love and Michael Beasley, was two years older than him.

Stephenson inherited the crown that Stephon Marbury and Sebastian Telfair once wore as The Big Apple's next great hope. For the most part, he lived up to the hype. Stephenson exited Lincoln High as the New York's all-time leading scorer and won four city titles.

From a scouting perspective, Stephenson is the full package. One other player matched his averages this season and it was league MVP Kevin Durant.

Lincoln High is also where Stephenson had his first run-in with the law. At the start of his senior year, he was charged with misdemeanor sexual assault for allegedly groping an underage girl at school.

In part because of the legal issue, Stephenson endured one of the most prolonged recruitments of any high school star in recent memory. He waited until June 30 before signing with Cincinnati. Stephenson's only year in college was a bit of a mixed bag. He was named Big East Rookie of the Year, and averaged over 12 points and five rebounds per game, but the Bearcats only went 19-16 and lost in the second round of the N.I.T.

Stephenson's difficult reputation was part of the reason he slipped to the second round of the 2010 draft. It ended up being a blessing. What Stephenson needed was someone who believed in him enough to be patient with his development, and he found that person in the unlikely form of Larry Bird.

Bird and Stephenson would appear to be diametric opposites, but the NBA legend saw something he liked in the young Coney Island guard and was determined to give him a chance. Just weeks after he was drafted, Stephenson tested that commitment in the most disheartening way possible. On an August night around 5 a.m., he allegedly pushed his girlfriend down a flight of stairs, grabbed her head and slammed it against the bottom step.

Stephenson was only 19 years old and the case was eventually dismissed, but it's the type of incident that defies any sort of defense. Just as Stephenson should have been ready to show that the drama of his prep career was behind him, he committed his most unforgivable sin yet. It's the type of thing that can stick with a person for a lifetime. Once again: Lance Stephenson doesn't ever make it easy. 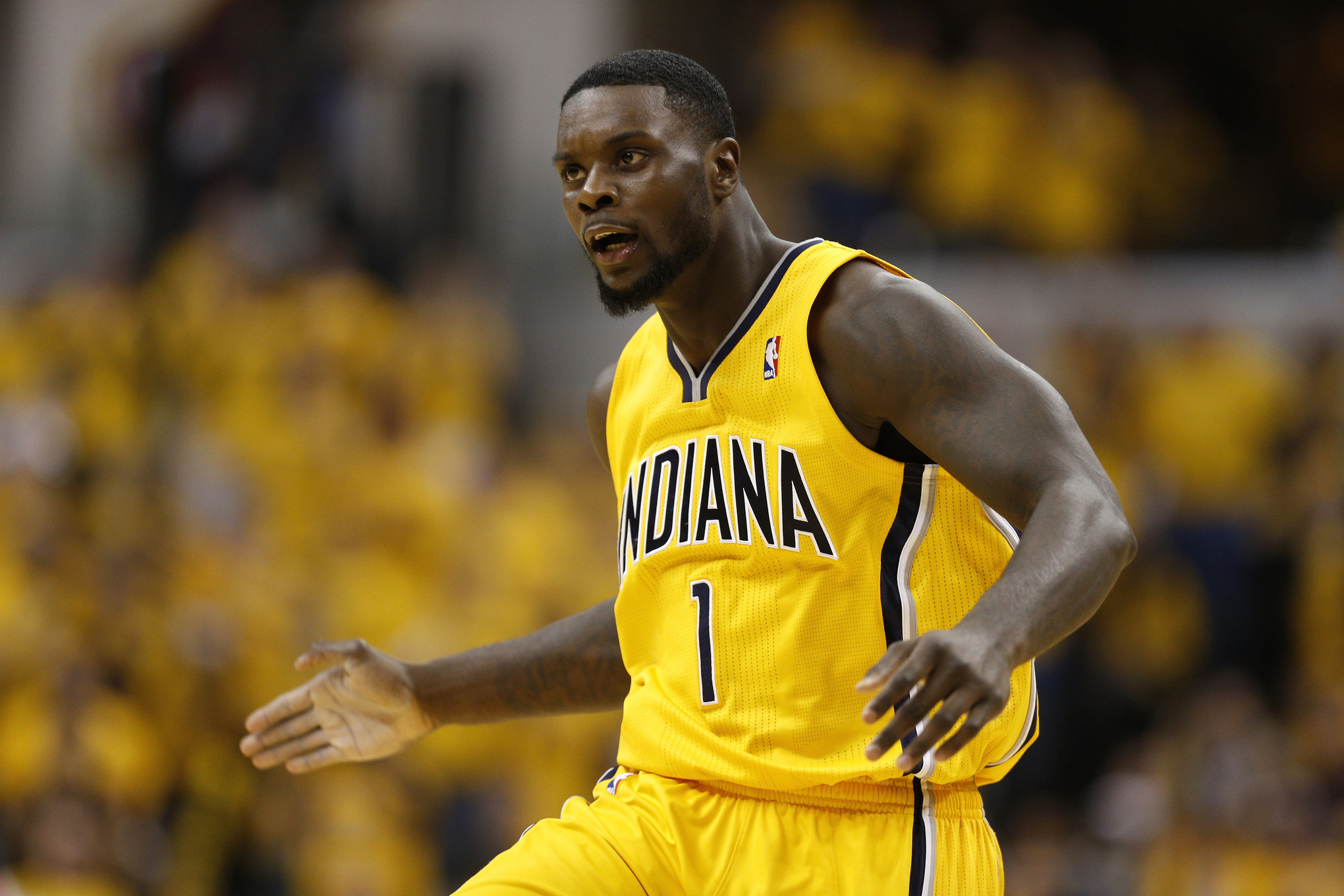 Strip away the troubled backstory and Stephenson would be in-line for a huge payday as he gets ready to enter unrestricted free agency. There are not 23-year-olds who play as hard and as well as he does at both ends of the floor available at a position as a relatively weak as shooting guard. The statistics back this up. Stephenson boasts one of the more unique and desired skill sets for any young player, and he's getting better.

From a scouting perspective, Stephenson is the full package. He can put the ball on the floor and get to the rim. His three-point percentage has risen every year, topping out at a respectable 35.2 percent this season. He rebounds better than any guard in the NBA. His ability to act as a secondary ball handler and facilitator was evident when Indiana started using him as the point guard on their second unit this past season. He's long enough, strong enough and confident enough to defend the best offensive player on the other team, ranging from point guard to small forward.

He's one of the youngest and most talented players that will be on the market, but his intense character that makes him a lighting rod on the court could also be a concern for any team bringing him into a new locker room.

Paul George: 'I don't know' if Lance should return

Indiana's star wing was hesitant in his endorsement of Lance Stephenson.

One other player matched Stephenson's averages of 13.8 points, 4.6 assists and 7.2 rebounds this season, and it was league MVP Kevin Durant. Throw in the fact that Stephenson did all that while shooting 49 percent from the field, and it would seem that he will become a very rich person this summer.

Of course, it won't be that easy. The Dallas Mavericks could use a player of Stephenson's caliber, but they reportedly don't plan on chasing him because of everything else he brings to the table. ESPN reported that Stephenson's free agent market is already drying up. Even his support from Bird, who stood with him through so much, might be wavering.

Stephenson has been free from criminal issues since that awful incident with his girlfriend as a 19-year-old, but there is still the sense that people around the league still don't trust him. He reportedly fought teammate Evan Turner in the last practice of the regular season and his one-man sideshow in the conference finals against James drew the ire of the front office and his teammates alike.

At this point, the theme is undeniable. Stephenson can't seem to get out of his own way, and few teams seem willing to give him the opportunity to figure things out. He remains a young man, and everything that happened against Miami was ultimately harmless, but Stephenson's reputation has hardened enough that it doesn't much matter. Lance Stephenson is always making things hard for himself. We're about to find out exact how much money that's going to cost him.