It's never too early to think about next year's draft. We list our 30 favorite prospects in 2015, starting with an SMU-bound point guard that will soon become a household name.

The 2014 NBA draft class was light on big men even before Joel Embiid broke his broke his foot, but reinforcements will be on the way a year from now. The 2015 draft will be defined by size thanks to three terrific incoming freshman, a promising international prospect and a few key returning college players. Even with so many talented 7-footers potentially eligible, our top player is a super athletic point guard who will remind you of previous No. 1 overall picks like John Wall and Derrick Rose.

Now that the 2014 draft is officially behind, let's look ahead to next season with our 2015 NBA mock draft.

Mudiay is a 6'5 lead guard explosive enough to invite Russell Westbrook comparisons. They aren't off base. A year with Larry Brown at SMU should help him harness his elite athleticism. He's an unpolished three-point shooter at this stage of his career, but he has plenty of time to figure that out.

Turner often gets comped to LaMarcus Aldridge for a reason. He's a massive (6'11.5 with a wingspan over 7'3) athlete with a nice enough touch on his face-up jumper to compete in the three-point shootout at the McDonald's All-American Game. Texas might not put much spacing around him next season, but Turner has all the the tools you look for in a modern NBA big man.

Sam Hinkie did it again: he has committed to being awful in June by taking two players unlikely to suit up next season. Will the Hinkie Gambit survive the scrutiny?

Andrew Wiggins and the pressure in Cleveland

Now that the much-hyped wing is indeed the No. 1 pick, his responsibility is to put Cleveland, Canada and the entire 2014 class on his back.

Okafor will be the most polished center to enter the college ranks in years. His post moves are already more polished than many NBA big men. He isn't an elite athlete, but a 7'6 wingspan helps make up for some of that. Chicago has produced four top-two selections in the NBA draft over the last seven years. Okafor (and Kansas' Cliff Alexander) is next in the lineage.

Towns is a 7-footer with good athleticism and a solid three-point stroke, so he has all the tools to develop into a great player. But how much burn will he get at Kentucky next year? Towns will be fighting for playing time with Dakari Johnson and Willie Cauley-Stein at center, while Marcus Lee and fellow freshman Trey Lyles will hold down most of the minutes at power forward. All of those guys are potential first-round picks. Towns may be the most talented player of the bunch, but minutes still won't be easy to come by.

Porzingis pulled his name out of the draft at the last second this year when he almost certainly would have been a first-round pick. In 2015, he should go in the lottery if he continues to play well in the ACB league. The 7-footer doesn't turn 19 years old until August, and already displays good athleticism and a promising three-point stroke. He's a big-time international prospect whenever he decides to come out.

Hezonja has been on NBA radars for years and he doesn't even turn 20 years old until February. The 6'8 shooting guard is a plus athlete with an offensive game that can already be described as crafty.

Selden's offensive game reminds me of Lance Stephenson's, without the baggage. He's a stocky guard (6'5, 230 lbs.) who can get to the lane and finish. He also started to develop as a ball handler and playmaker as a freshman under Bill Self a year ago. The Jayhawks will be loaded next season, and Selden should take the reigns as the team's best perimeter player.

Oubre combines the panache of "Swaggy P" with elite athleticism and long arms. He's a thoroughbred athlete who should be a killer in transition for the Jayhawks next year.

LeVert wasn't a top 150 high school recruit, but he came into his own as a sophomore for the Wolverines last season. Smooth is the easiest way to describe his game. He'll be Michigan's featured offensive player without Nik Stauskas next season, and his ability to shoot, pass and dribble could make him a lottery pick.

Johnson will be the closest thing to Jabari Parker in college basketball next year. He's a big bodied forward who can score from every level. Sean Miller's Wildcats will be loaded next year and it's because he's able to keep recruiting talents like Johnson. 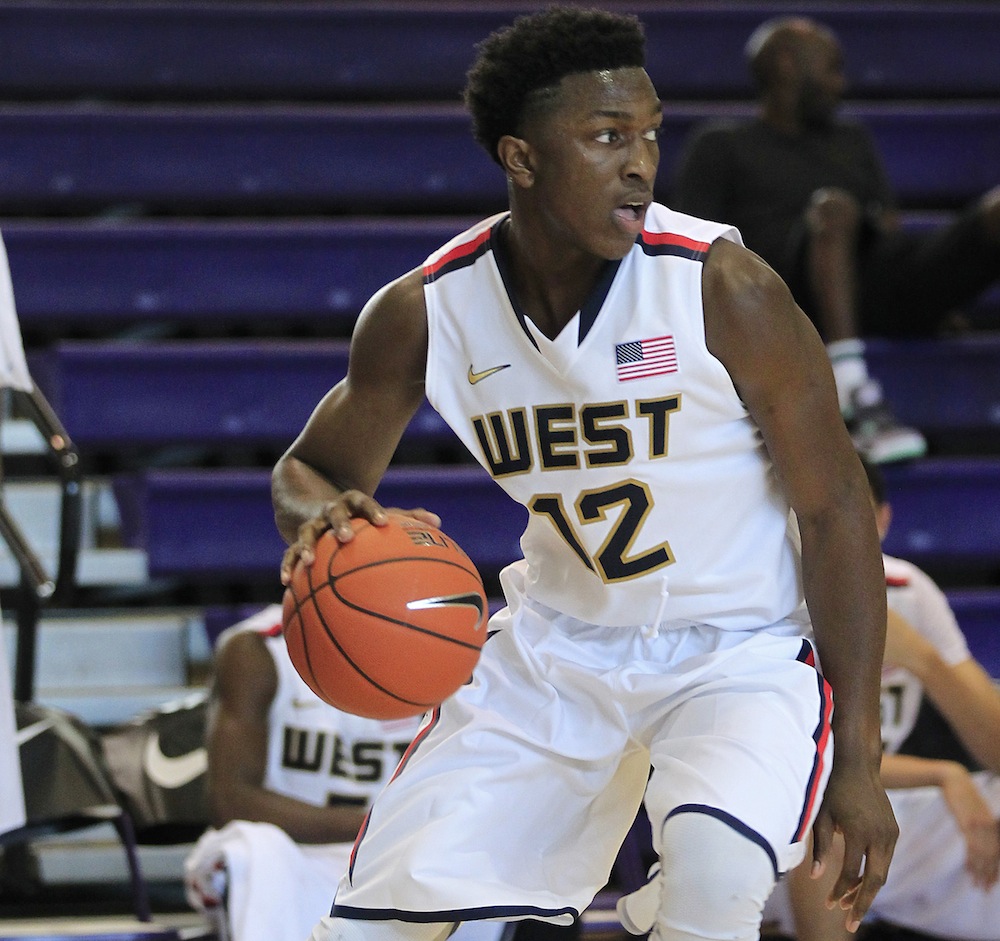 Hollis-Jefferson isn't as polished as Johnson, but he's a much better defender and a superior athlete. He'll fill the void left by Nick Johnson and Aaron Gordon as Arizona's go-to stopper and biggest transition threat.

Stein made a curious decision to return to school, if only because he would have been a first rounder this year and there's going to be a war for playing time in the frontcourt with so much talent in Lexington. Still, Cauley-Stein could be a lottery pick in a weaker 2015 draft because of his potential as a rim protector. Tyson Chandler is the obvious best-case comparison here.

Get ready for the Cliff Alexander Show, America. Highlight reel dunks and blocks and an endearing personality is what's in store. For more on Big Cliff, check out a story I wrote earlier this year on attending the Chicago Public League championship game between Alexander and Jahlil Okafor.

My favorite sleeper in college basketball.

My favorite sleeper in college basketball. Louisiana-Lafayette point guard Elfrid Payton was a lottery pick in the 2014 draft, but I'm not sure if he was even the best college prospect on his own team. At 6'10 and 250 pounds, Long is a powerful athlete who hit over 40 percent of his threes last year. There is little competition for him among big men in the Sun Belt.

At 6'11, 280 pounds, Johnson is a massive human being with a nice touch around the rim.

Johnson is a long athlete with good shot blocking instincts and a promising face-up jumper. He should shine with James Michael McAdoo out of the way for the Tar Heels.

Portis is a tall, lanky athlete who should develop into a versatile player at both ends of the floor. If his shooting comes around as a sophomore, he'll get looks in the lottery.

Walker will be expected to take a big step forward with so much talent gone in Gainesville. He's an elite athlete who should make regular SportsCenter appearances for monstrous dunks and blocks. The rest of his game remains a work in progress at the moment.

Paige broke out for the Tar Heels last season as a heady floor general and clutch shot-maker. He'll be the leader of a loaded team next year that will have serious Final Four aspirations. It should only help his draft stock.

Dekker can do a little of everything, whether it's shoot, rebound, defend or put the ball on the floor. 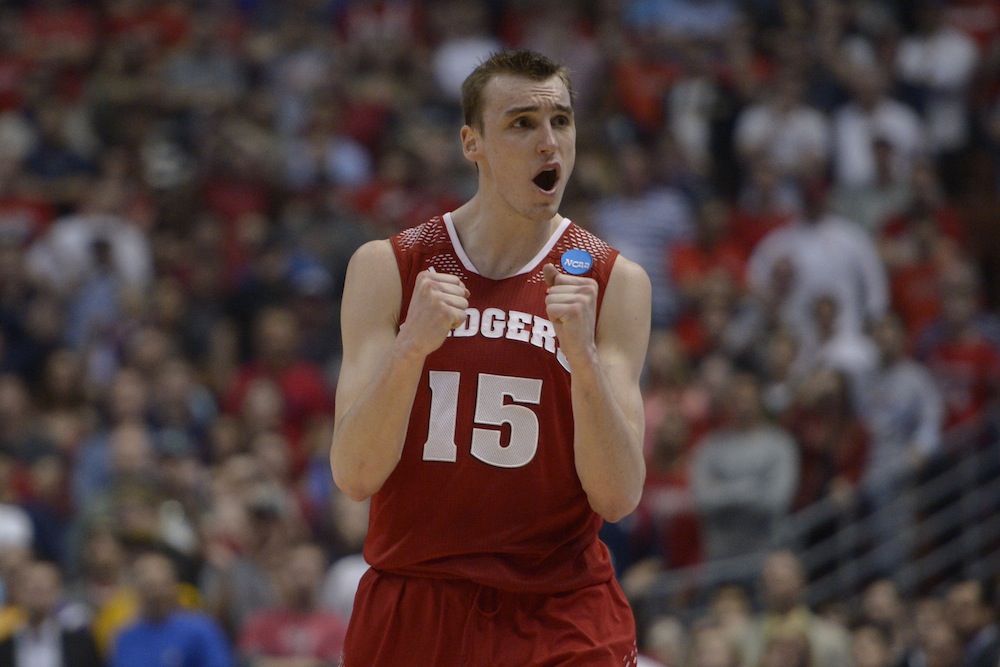 The stretch five is the natural evolution of the stretch four. That's what Kaminsky projects as being. He scored all over Aaron Gordon in the Elite 8 this past season, which has to count for something.

If Poythress ever learns how to shoot, his ceiling will be through the roof. Kentucky likes to play him at power forward, but he has the size, athleticism and motor to defend small forwards in the NBA. That might be his future calling in the pros.

A do-it-all forward who will be the glue guy on a stacked Blue Devils team next season. He could turn into an elite defender.

Hammons is 7-foot, 280 pounds with a developing offensive game. He should dominate the Big 10 next year.

In a touching moment, the NBA "selected" Austin, whose career was ended by discovery of a genetic disorder.

No sizzle in Celtics' draft, but plenty of steak

After all the rumors and speculation, the Celtics simply made their draft selections and got two players they believe will help them significantly.

Harrell is undersized at power forward and isn't much of a shooter, but the things he brings to the table are undeniably valuable. That would be toughness, rebounding, shot blocking and athleticism. He'll be a blast to watch at Louisville next year. Rims beware.

Dorell's brother is a 6'5 point guard with big-time upside. Check out this feature on him from Sam Vecenie last season.

He's already a legend in Lexington forever for those three game-winning shots he hit to help carry the Wildcats to the national title game. His shooting ability makes him a better prospect than his twin brother Andrew.

A springy athlete with shot blocking potential. LSU will be a sleeper in the SEC next year.

Good size (6'6) and perimeter shooting ability should have him in the mix to be a first rounder if he has a big sophomore year.

Athletic forward who is quietly solid at every aspect of the game. He could be a breakout star for the Aztecs next season.