LeBron James isn't the only reason Miami's offense is great

The Heat have the best player on the planet, but their offensive success is due to much more than just one player. We explain how the Heat's spacing and off-ball movement forces defenders to pick their poison.

Share All sharing options for: LeBron James isn't the only reason Miami's offense is great

The Miami Heat's revolutionary offense is a testament to their decision three seasons ago to discard the traditional boilerplate of NBA lineups and go small. Coach Erik Spoelstra played homage to then University of Oregon coach Chip Kelly and imported a "pace and space" offensive philosophy. The "space" part of that designation is most essential to understanding the Heat's success. Miami really only cranks up the pace off live-ball turnovers, but the Heat are elite at  spacing the floor in half-court sets with converted power forward Chris Bosh playing center.

Miami isn't a "Seven Seconds or Less" team like the old Phoenix Suns. Instead, the Heat use a legitimate half-court alternative that runs opportunistically, but otherwise uses the otherworldly James in a variety of spots -- corner, wing, high post and on the ball -- to facilitate an offense that spreads three or four players spotting up around the three-point arc.

The most effective Heat actions involve quick-hitting screens, deliberate misdirection and putting LeBron on the move, either off the dribble or on the catch. When executed properly, Miami puts an inordinate amount of pressure on help defenders. The Heat have to make a decision so quickly with so many threats to digest. Do I help at all, or do I stay home on ...  Mario Chalmers? Shane Battier? Rashard Lewis? Ray Allen?

We previously looked at how Miami dialed up its pressure defense. Let's see some of the ways the Heat score effectively.

This first Heat action combines all of the qualities listed earlier: misdirection, a quick-hitting pick-and-roll for LeBron, a drive-and-kick and a spaced floor leading to an open corner 3.

As the play shapes up at the top of the floor, Allen and Battier are in motion on the baseline. They are executing very basic baseline cuts that appear to be designed just to get the defense moving. Or, so you think. 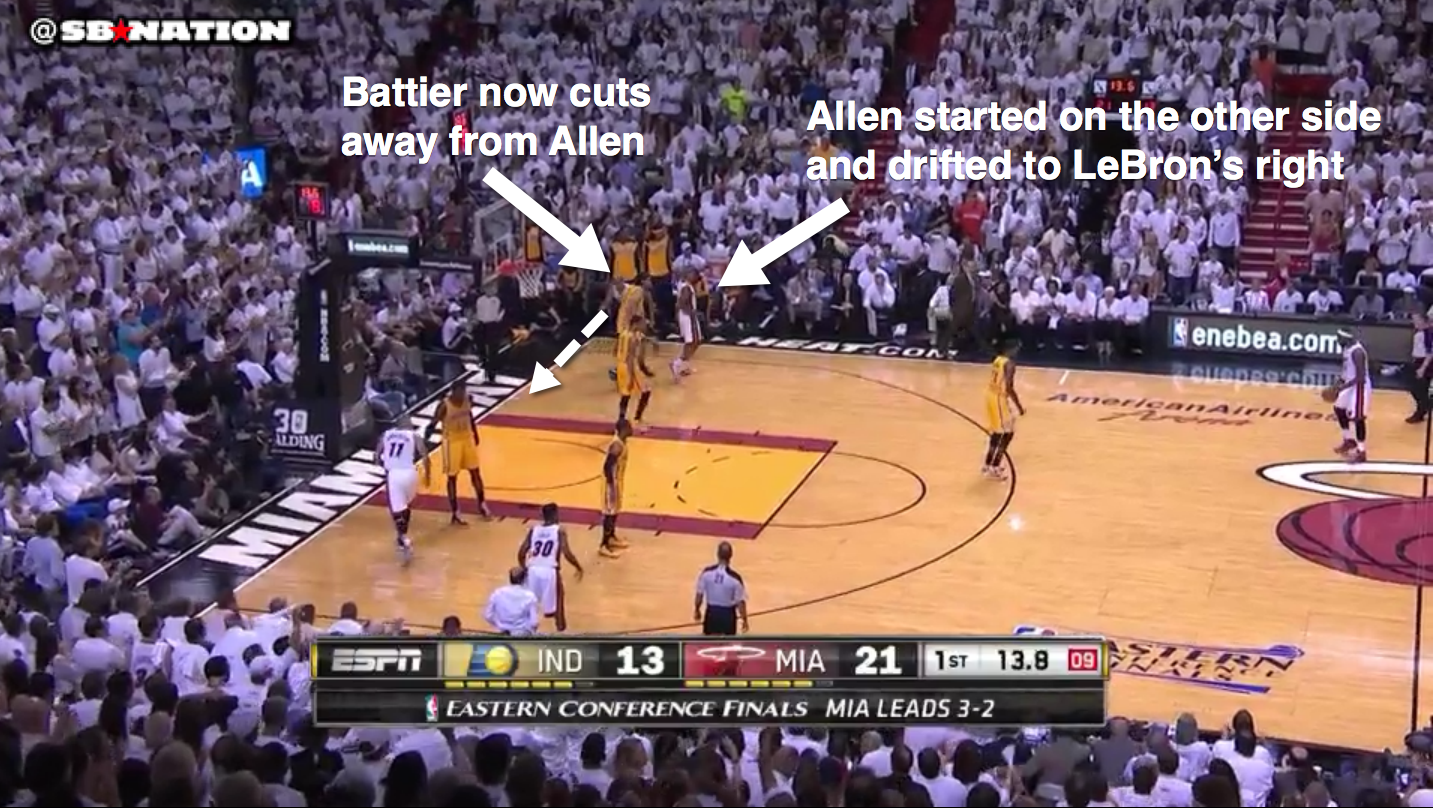 The shooters exchanging sides triggers the main action, which involves Chris Andersen curling up from the baseline to set a screen for James. It's no accident that the Birdman is being defended by Roy Hibbert. You may have heard that Big Roy has trouble moving laterally. 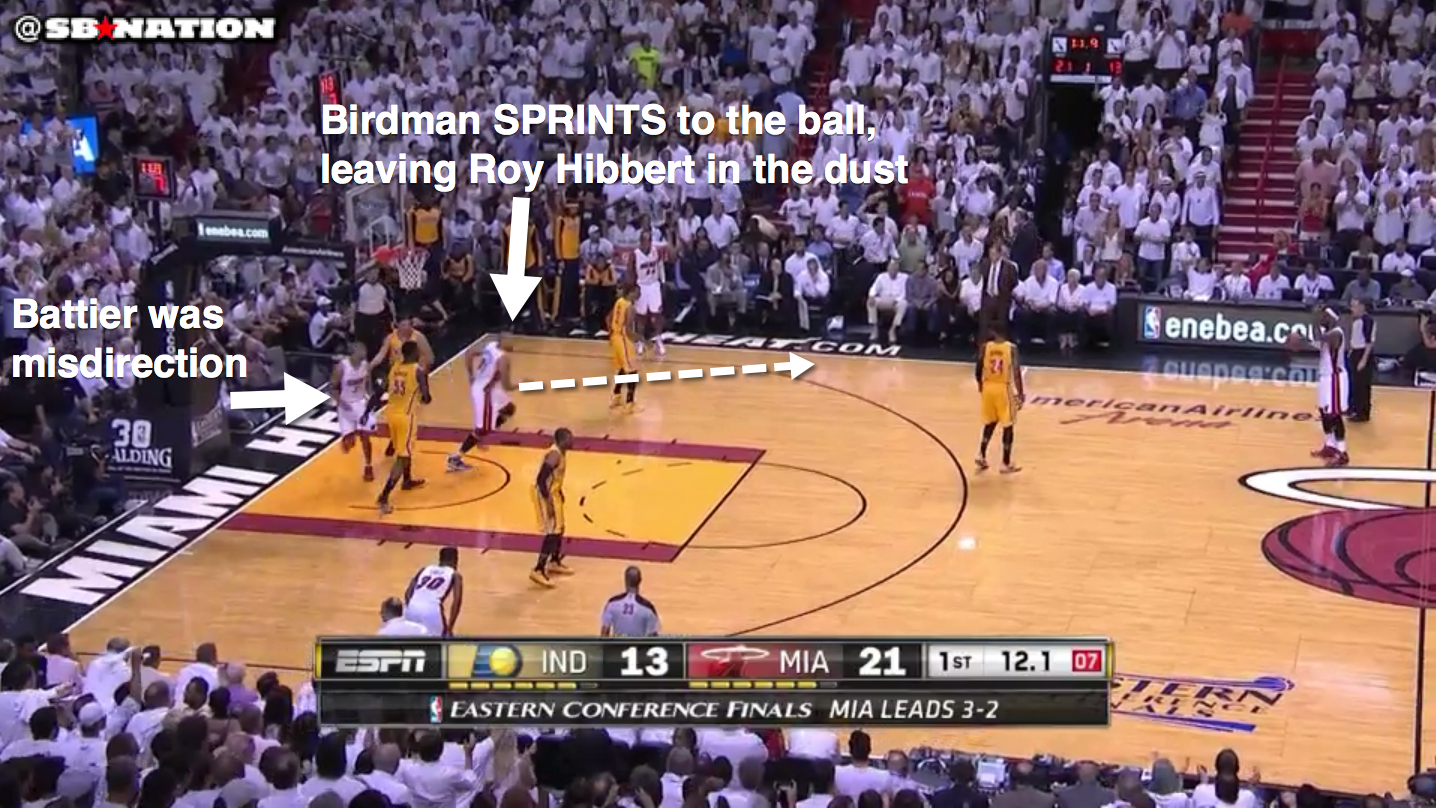 By sprinting into the pick, Birdman forces Hibbert to move quicker than he wants to get into position, leaving him off-balanced. This allows LBJ to turn the corner off the screen and immediately attack him. 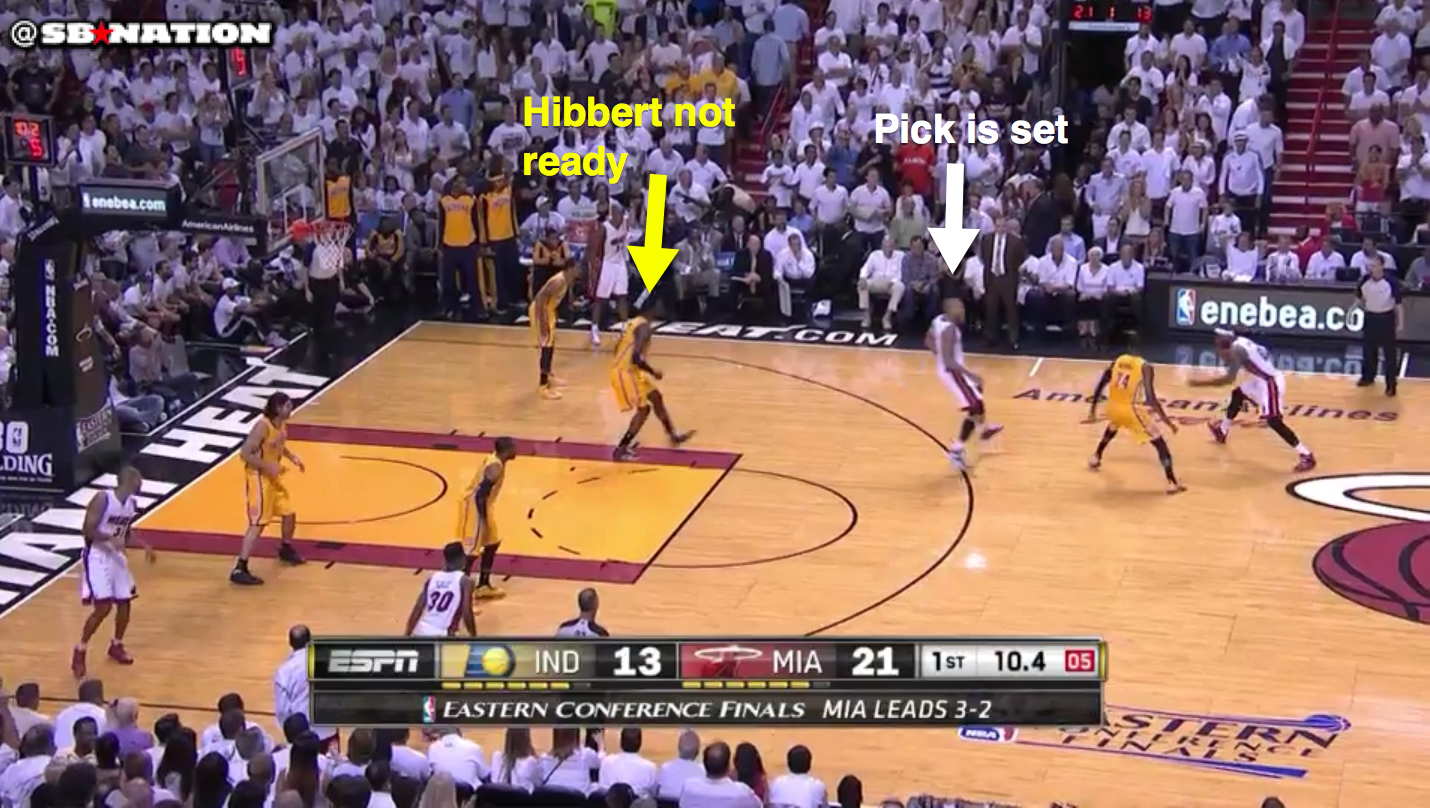 As LBJ approaches the rim, Battier sneaks from the left corner to the wing. His man, Luis Scola, is frozen on the low block trying to figure out if he should help on LeBron or stay at home on Battier. As Scola is caught in no man's land, LeBron fires a fastball to Battier, who kindly responds with a 3.

This is a very basic Heat action, but it displays the excellence of their "space" offense. Birdman's speed coming up for the pick, LeBron's amazing passing skills and the ability to have two outstanding three-point shooters standing in the corners make something simple impossible to defend.

Sometimes, the off-ball action is more intricate. Take this play from the second quarter.

With LeBron handling the point guard duties on top, Miami sets up a pindown screen involving its two biggest players in the corner. This is known as "Quick." Rashard Lewis positions himself in the corner and Chris Bosh is the screen setter coming from the elbow. Bosh crashes down and sets the screen, freeing Lewis to sprint up into a screen for LeBron. 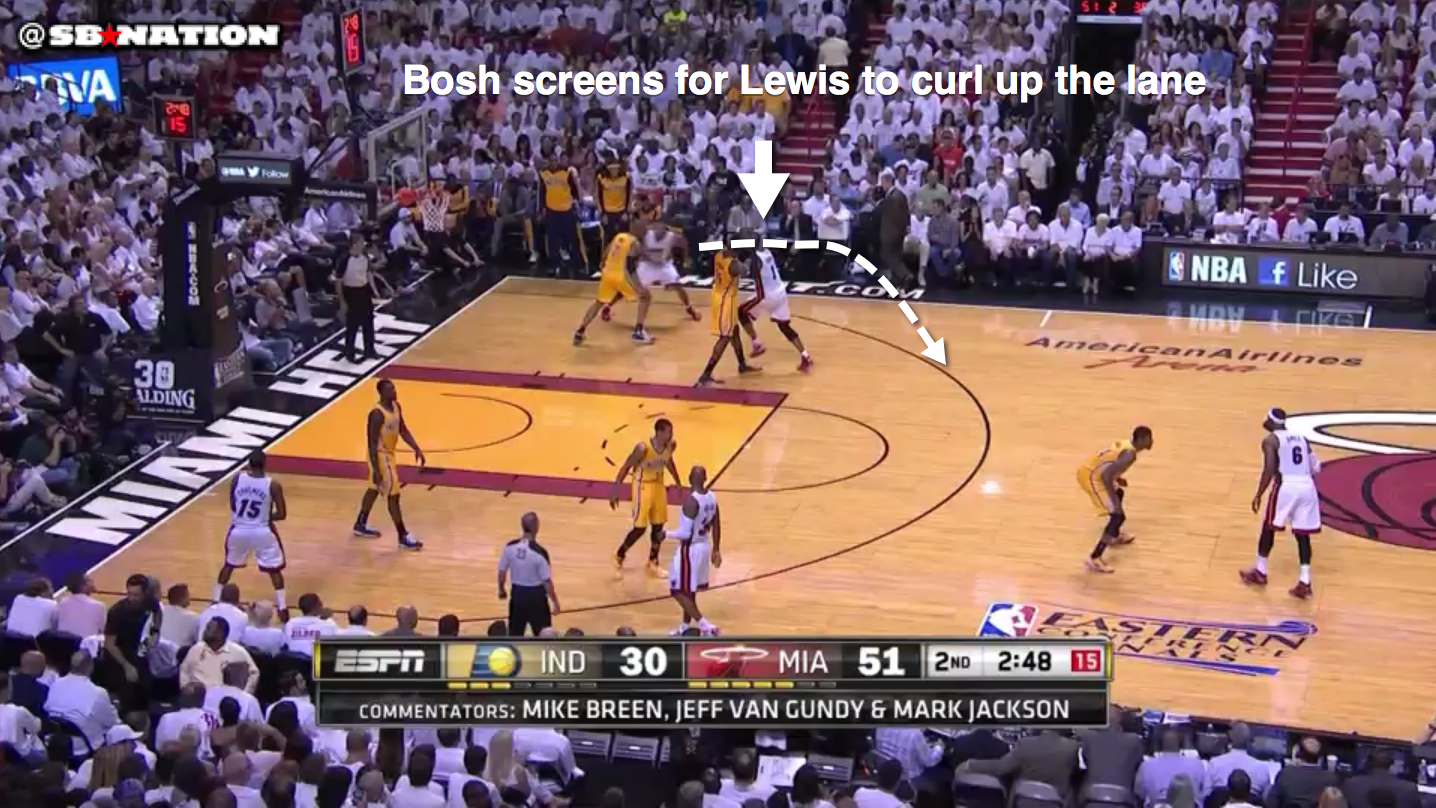 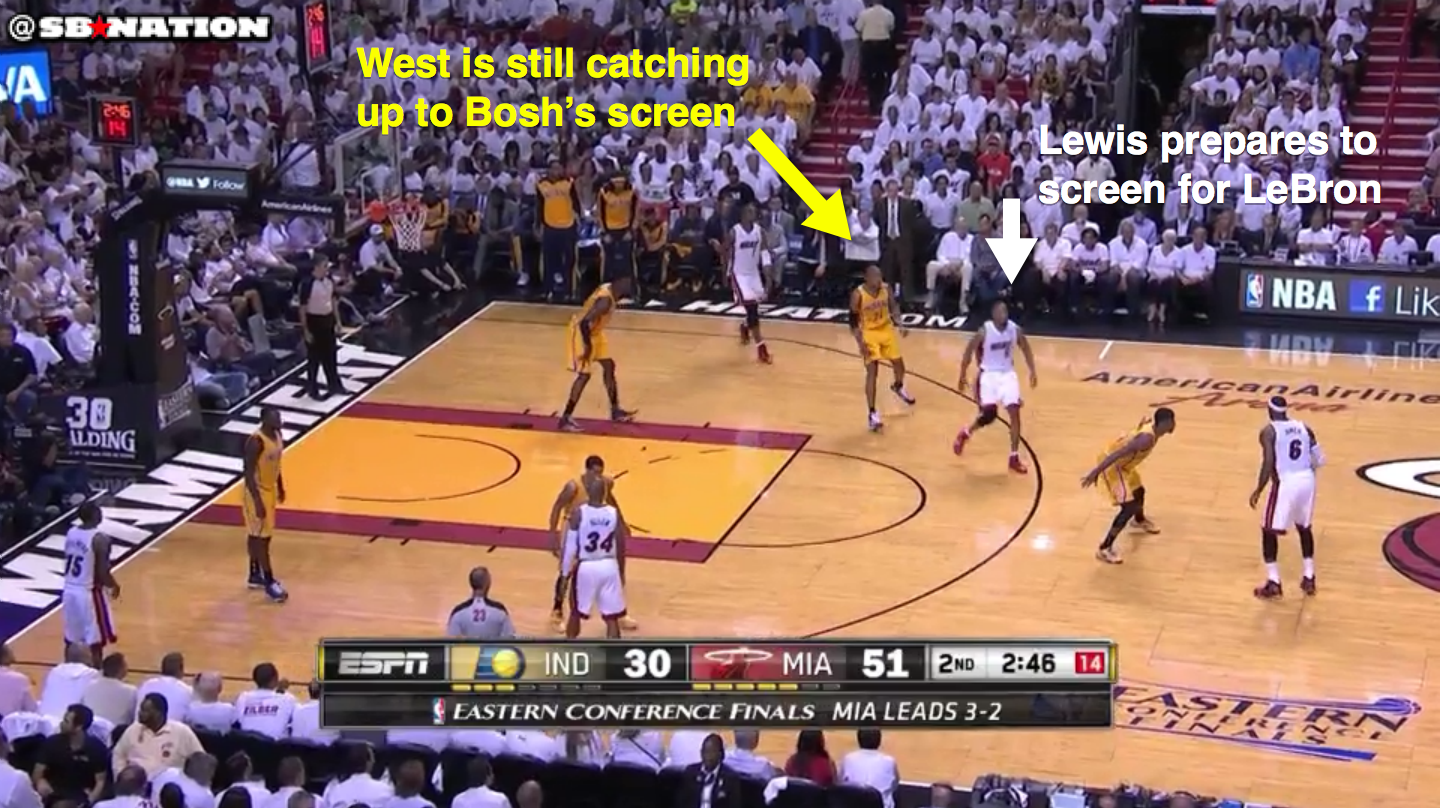 But James rejects the screen and drives left, getting all the way to the charge circle before being fouled. As he is fouled, he kicks the ball out to the corner, where Bosh is wide open for three. Poor Hibbert is again in no man's land, late on his rotation and unable to close out on Bosh in the corner. The Pacers are lucky the shot didn't count. 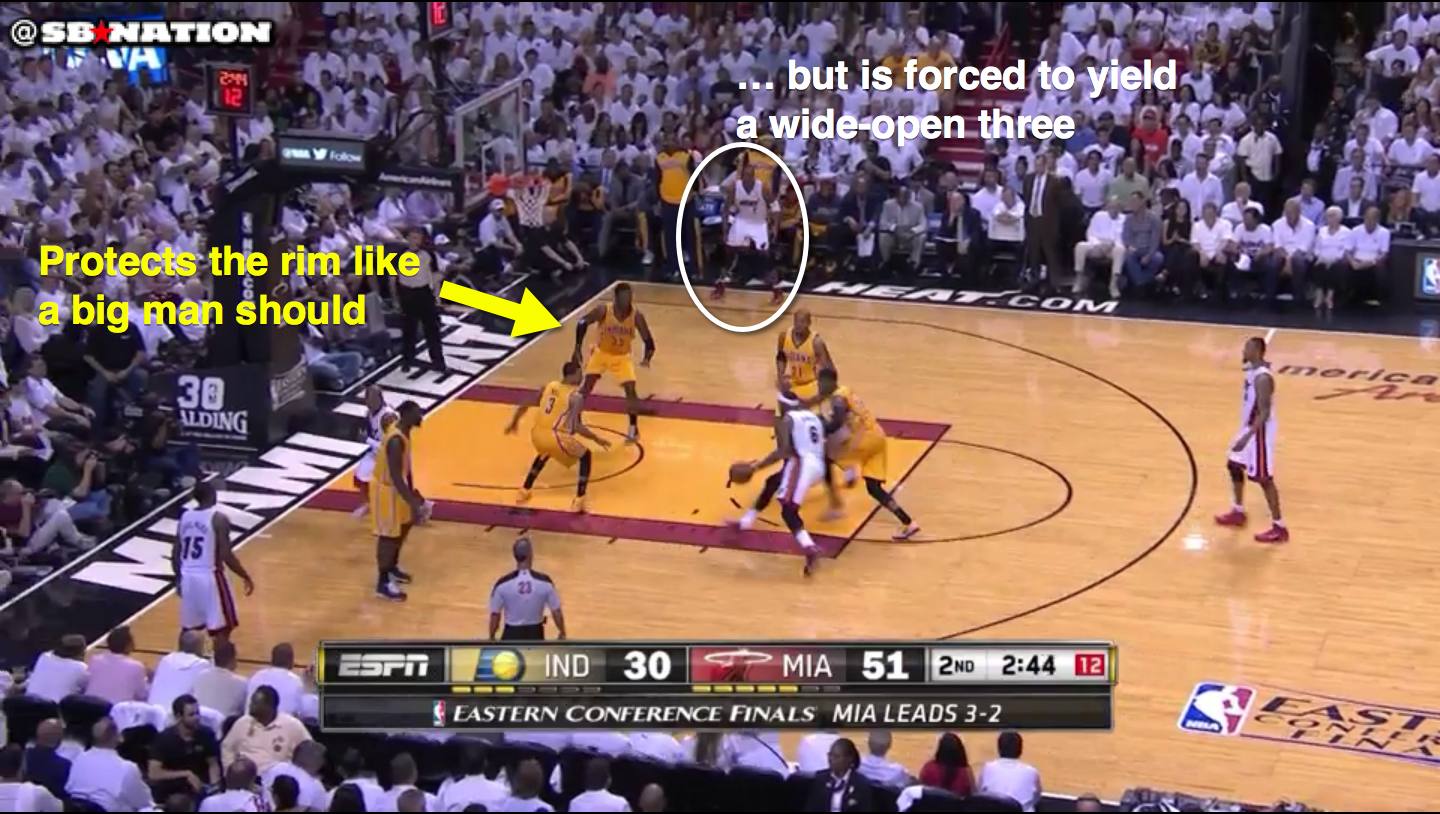 Given its success, the Heat go back to this action less than a minute later. The set puts David West into the pick-and-roll, which is preferable in certain situations. West is much easier to exploit off the dribble and usually yields a higher points per possession average in pick-and-roll plays than Hibbert. It also put Hibbert into an impossible situation having to protect the rim and cover Bosh at the three-point line. If the two big men decide to switch on the initial down screen, it also allows the screener a head start and a much bigger cushion if he pops open.

The Heat again run the "Quick" pindown, with Andersen occupying Bosh's role. Again, Lewis sprints into the screen with LeBron. By using speed in these pick-and-rolls, Miami puts extra pressure on the defensive big to make an instant decision on how he is going to defend the sequence. The floor is spaced with Chalmers and Allen spotting on the opposite side of the floor, ready for help-the-helper defenders to make a bad decision. Combine this with a screening big in Lewis who can also shoot the 3, and Indiana is screwed.

This time, LeBron uses the screen and turns the corner. West is slow to chase Lewis and assumes a very deep zone position in the lane to deal with LBJ off the Lewis screen. Thus, Rashard turns and pops to the three-point line, and there is nothing West can do. 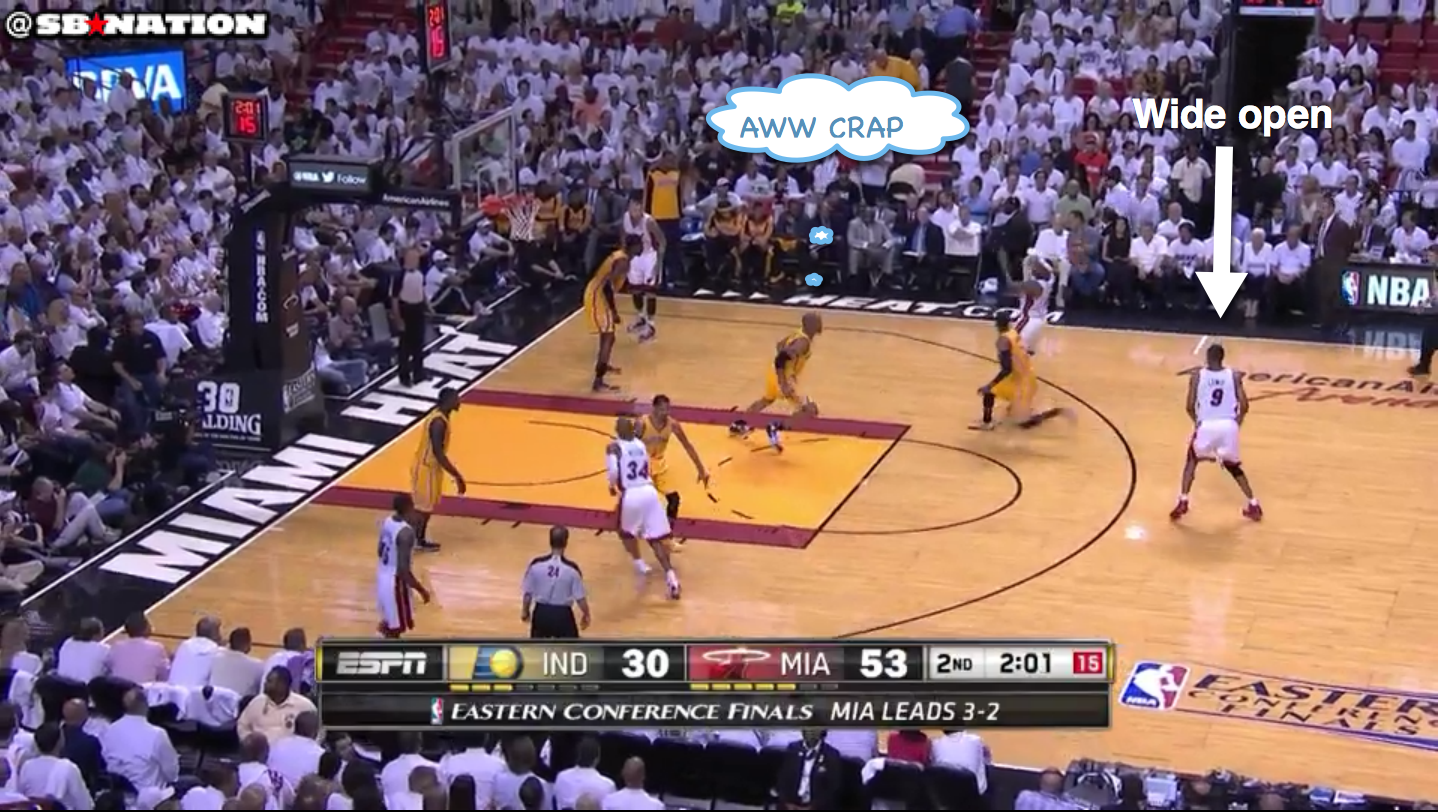 Lewis receives a pinpoint hook pass from LeBron and drills the three-point bucket.

"Miami Space" has become a national rating hit. The combination of LeBron's everything, Wade's cutting skills and everyone else spreading the floor at the three-point line has Miami's offense humming at peak efficiency. The Heat's combination of actions and personnel should render the Spurs duo of Tim Duncan and Tiago Splitter unplayable. The Spurs better prepare for one "Quick" pindown after another involving their two big men.

The pressure will be on both Boris Diaw and Kawhi Leonard in smaller Spurs lineups. While they are better equipped to keep up with the Heat's sprinting brand of screen-and-rolls, it will be interesting to see what the rest of the San Antonio defense is up to at the bombs-away line. I'd imagine the Spurs will start by staying home on the Miami shooters, use primary defenders to clog the lane and allow James and Wade to fire away from mid-range coming off those screens.

This formula almost worked in last year's Finals. Will it work again?