Rob Chudzinski was fired by the Cleveland Browns after just a single season and Ryan Nanni has discovered that sometimes, it's hard to let go for an NFL coach.

Share All sharing options for: After the Axe: Rob Chudzinski can't let go

When former Browns coach Rob Chudzinski agrees to meet with me at his home, I'm not surprised to learn that he still lives in Cleveland. Between selling your house and letting your kids finish out the school year, extricating yourself from a city can be a lengthy process.

It's not weird that Chudzinski lives in Cleveland. It is weird that he lives in this house: 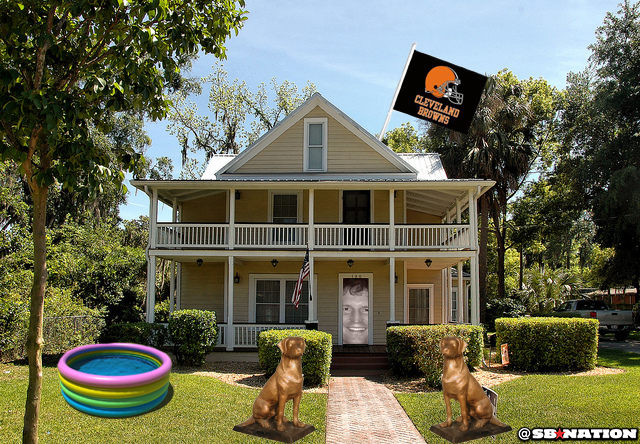 Before I can figure out which part of Kosar's face is the doorbell, Chudzinski opens the mouth-door. He's dressed in a Browns tracksuit and visor. There's a whistle around his neck. And he's holding an iPad with a Browns logo on the back of it. "Don't just stand there, son!" he shouts. "Come on into my office. It may be a slow time of the year for you, but these hours are what make the difference for me and my team in November. So let's get rolling!" This is not comforting. I spend the next hour with Chudzinski in the "film room," which is actually just his laundry room with two black and white tube televisions set on top of the dryer. He keeps the lights off so he can "maximize focus," which makes it more jarring when his wife opens the door -- once to retrieve a bottle of carpet cleaner, and again to return it to its place in the cupboard. "See, right here is the wrinkle they're not going to expect. Weeden's gonna fake the handoff and then bootleg to his right BUT! Then he throws it back to Greg Little. Defense is gonna be so busy flowing to the wrong side of the field they won't be able to recover."  We are watching a VHS copy of An American Tail 2: Fievel Goes West.
"You gotta be kidding me! You really think the Browns would fire me after just one year? Come on, man."
I've ruled out my initial conclusion, that Chudzinski is intentionally messing with me and this is all some sort of prank. The whole thing is both too earnest and not elaborate enough. So, if it's not a joke, that leaves only one possibility: Rob Chudzinski truly believes he's still the head coach of the Cleveland Browns. Once we move on to the garage, where Chudzinski starts drawing out plays with sidewalk chalk on a spare slab of sheet rock, I'm barely listening to his words. My thoughts are too busy trying to determine how best to deal with this. Should I confront Chudzinski with the truth? Will that send him into some sort of violent rage? Is that just something I've imagined based on movies and TV? Now we're in the backyard, where Chudzinski is conducting passing drills with American Girl dolls. He's all positive energy and enthusiasm. This isn't just real to him -- it's important. Heartbreakingly so. I can't keep watching this with a clean conscience, and it's time to introduce a dose of realism. Gently, of course. Putting on my best reporter face, I dip my toe in the water. "Coach, what do you have to say about the reports that the Browns fired you on Dec. 29 last year?" Chudzinski stops in the middle of a sled drill, which his pet cat, Mew Groza, is not doing very well. He gives me an icy stare, and I'm briefly worried that he might attack me. And then he breaks into a chortle. "Heck, man, you believe EVERY dumb thing the media says? You gotta be kidding me! Pat Shurmur got two years. Romeo Crennel got FOUR! You really think the Browns would fire me after just one year? Come on, man. That's crazy. We all know we're trying to build from the bottom up here. You don't do that by firing your hand-picked head coach after one freaking season."

Ryan Nanni caught up with former Houston Texans head coach Gary Kubiak for a completely fictional interview. Gary harbors no hard feelings about what happened. He just wants his table saw back.

Leslie Frazier and the golden handcuffs

Leslie Frazier and George Costanza have a lot in common. Ryan Nanni gets to the bottom of it in a completely fictitious interview with the former Vikings head coach.

Gary Kubiak just wants some peace Leslie Frazier and the golden handcuffs
And before I can respond, he's off to the next task -- a conference call with the competition committee. By that, I mean sitting in Chudzinski's kitchen while he wears a computer gaming headset that's not hooked up to anything and talks loudly about kickoff rules and the finer points of pass interference. The "call" ends when the headset's cord gets tangled in a wine rack. I try to use this as an opening to push back on the fact of Chudzinski's firing. "Coach, I know this is hard. You spent years to finally get a head coach position. You worked long hours, you sacrificed over and over, and right when you'd reached your goal, it was taken away from you. But this isn't doing you any good. Maybe it wasn't fair that you only got one season. Maybe you deserved more time. That didn't happen. And you need to accept that. You need to move on." It's too much for Chudzinski to hear. He starts sobbing, those loud, heaving tears usually reserved for a heartbroken high schooler. "You don't understand," he gets out between gulps of air. "I can't just turn it off." Now I'm confused. Turn what off? "I know I can't lead a team to the Super Bowl this year. But that's not any different from last year. When you coach the Browns, your whole job is built on believing a lie." With a contemplative sigh, Chudzinski finally gathers himself. "The lie that you're working for a real NFL team."