California Chrome has catapulted professional horse racing back to center stage. With the first two jewels of the Triple Crown already in place, Chrome will attempt to defy the odds by winning the Belmont Stakes this Saturday.

When Marshall Cassidy, former announcer of the Belmont Stakes, took a last sip of water, cleared his throat and stepped up to the mic in 1989 for what would prove to be his final time calling a Triple Crown bid at the track in Elmont, N.Y., he had conflicting emotions.

The stage had been set, not all that unlike it is this weekend, for that early Saturday in June, the "Run for the Carnations," "The Test of the Champion." Sunday Silence, the black stallion from California, winner of the two preceding Triple Crown Series races the Kentucky Derby and Preakness Stakes — each by just negligible distances — with a chance at thoroughbred immortality. Standing in his way once more was his installed rival, the brawny chestnut colt Easy Goer from the East Coast, who had managed close (if not disappointing) second-place finishes in both races. Easy Goer, of the pedigree of Alydar, the robust competitor to the last Triple Crown winner, 1978's Affirmed, versus the other coast's unwelcome intruder. 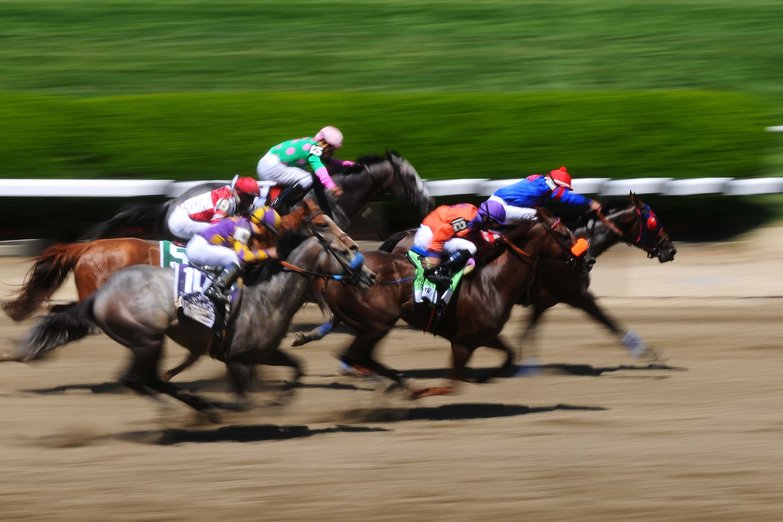 Cassidy, who held the post from 1979-90, naturally rooted for calling his first Triple Crown champion after three previous unsuccessful attempts. Yet he was also partial to his hometown horse despite what it would mean for the sport and the sexy credential it would withhold from his broadcasting career.

"Sunday Silence was from the West Coast and Easy Goer was from the East Coast. As an Easterner, I kind of crossed my fingers for Easy Goer," Cassidy explains by phone from his residence in Saratoga Springs, N.Y., some 180 miles from Belmont Park. "He was just the owner of New York's tracks. Ran like a bat out of hell in New York. Great big chestnut. Always won by the narrowest of margins when he won in New York and then lost by the narrowest of margins when he lost out of town. Very exciting horse to watch and I wish we had another one like him."

Easy Goer, who many commentators and pundits to this day argue was the better horse even with the losing head-to-head record against Sunday Silence, of course went on to avenge the previous two losses. He vanquished his invented adversary by a full eight lengths, preventing yet another Triple Crown bid and adding one more name to the list of "near-misses."

This hapless register has swelled by 12 in the past 36 years to a total of 22, as has been highly publicized in all of the build-up to California Chrome's attempt to break the second-longest American thoroughbred Triple Crown drought this Saturday. And as the list has expanded, the inverse has occurred in the sport, with each passing year without a winner of its most hallowed achievement decreasing horse racing's significance among the interests of the American sporting public. So, will California Chrome exorcise the demons of predecessors like Sunday Silence that failed before him and help return the pastime to relevance? Or, will he suffer the fate of becoming unlucky number 13 since Affirmed's triumphant gallop nearly four decades ago and, in turn, join the group of disregarded names on the regrettable list of Triple Crown losers?

"To me, it's the toughest feat in all of sport." Gary Stevens

"I've been through this thing too many times," intones celebrated jockey turned horse racing analyst Gary Stevens while looking on at the racetrack in Elmont. "And to me it's the toughest feat in all of sport. There's only been [16] Triple Crown winners in professional baseball, and there's only been 11 Triple Crown winners of thoroughbred horse racing. That's how tough it is. That's why it's been 36 years."

Stevens, winner of each of the Triple Crown races three times over — but never consecutively — knows the heartache only too well from when he came about as close anyone since jockey Steve Cauthen did it aboard Affirmed to completing the vaunted task, riding Silver Charm in 1997. The victor in both the Derby and Preakness by a head in an especially deep field that year was caught from behind by Touch Gold in the homestretch, losing legendary status by a mere three-quarters length.

The number of obstacles related to this lofty endeavor could fill a large volume. For starters, many cite the length of the Belmont: a mile and a half, while the Derby measures at a mile and a quarter and the Preakness the traditional distance of a mile and three-sixteenths. For most horses, the Belmont represents the furthest they've run in their entire 3-year-old racing careers. 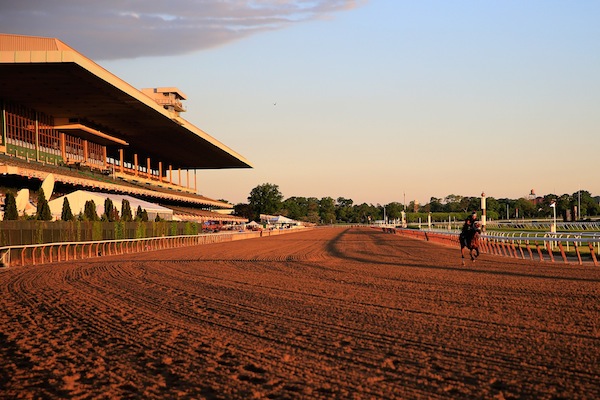 "At Belmont Park, the turns are so gradual — a very large radius for each of the two turns — it's almost like running the straightaway," Cassidy says before also discussing the difficulty of the graduation in distances from race to race, and over such a short period of time — just five weeks. To even have a chance at the Triple Crown at the Belmont inherently presupposes wins at the other two races, no easy assignment, and that's not it.

"It's super hard to get a horse ready to run that first mile and a quarter the first Saturday in May," says Stevens of the Derby. "Leading up to, I mean, half of 'em are worn out before they even run in the Kentucky Derby," noting the burden of the earlier races a horse must perform well in just to secure a place in the event popularly known as "The Run for the Roses." On top of that, with each conquest comes an onslaught of new challengers, some of which are entered in a particular race because they've been drilling for strictly that distance.

"And if you can get through that," says Stevens of the Preakness before adjusting training for an attempt at the annals of horse racing with a win at the Belmont, "… you're facing new shooters again that have been pointing specifically for the mile and a half distance. So that's what makes it so difficult."

The combination of speed and stamina remain the two most important elements in horse racing. To put it in horse terms, common wisdom suggests that pedigree provides the makings for both, where proven ancestral bloodlines pass along exceptional traits to their progeny. Some breeders subscribe to the idea that certain horses are better built for sprinting, while others possess the characteristics of distance running. Whether or not it has proven to be a factor in the past, Stevens doesn't see it affecting this year's 11-horse field at the Belmont, before throwing his hat behind California Chrome to end the record dry spell.

"I know they talk about this horse's pedigree and everything else," he says. "I don't think any of these horses at this time of the year wants to run a mile and a half and they're never gonna be asked more than likely to do it ever again in their career. Ya know, Affirmed was brilliant, Alydar had all the pedigree and they proved it in the breeding shed. But they're not in the breeding shed, this is the racetrack and the underdog — the horse that wasn't bred as well as Alydar — came out on top. And (California Chrome owner) Steve (Coburn) said that this horse reminds him of Affirmed and that's who he reminds me a lot of. The horse is brilliant. I mean, he can flat out run."

Gate position is another component often agonized over. Because Chrome will be starting out of the 2-hole, the battle for position nearest the rail should be less an aspect affecting whether he adds his name to the history books as the 12th Triple Crown winner. That is, so long as jockey and trainer do their jobs, and avoid over-thinking the situation under the pressure of the moment.

"These things happen," says Cassidy of major racing gaffes he's witnessed. "I can't tell you what's right and wrong, but I can tell you it's funny to look at when it happens. You've got to run the race fast, but you've also got to run the distance, and the trainer is responsible for that. The jockey has a lot to do with riding properly. Jockey with strategy on the track, trainer with strategy in the barn."

Stevens meanwhile believes horses also can perceive the weight of the opportunity.

"He's brought us mainstream again for the first time in a lot of years. If he pulls this off he deserves to have a statue made of him."

For whatever it's worth, California Chrome jockey Victor Espinoza has faced this precise circumstance before, in a failed Triple Crown attempt aboard War Emblem, one of the 22 "near-misses," in 2002. The bid, however, was over right as it began with the steed stumbling out of the gates, nearly dropping to his knees. He recovered and made a move late for a momentary lead in the final turn, but it evaporated at the top of the stretch and he placed eighth out of 11.

Still, War Emblem's crack at the run of defeat netted a then-Belmont track attendance record of 103,222. That was surpassed by Funny Cide's failed bid two years later, and in all likelihood will also be by California Chrome's run in the 146th Belmont on Saturday. The latest attempt has surely drawn the attention of the American public.

"I haven't heard thoroughbred horse racing mentioned on CNN for a long time, and it was right at the top of the hour," says Stevens. "I think that says right there what [California Chrome] can do for the sport. He's brought us mainstream again for the first time in a lot of years. So if he pulls this off he deserves to have a statue made of him."

Cassidy, who last attended the Belmont in 1995 and retired the year after, says he still wishes he could have called a successful Triple Crown run even if it meant his preferred Easy Goer would have had to falter back in '89. Though Cassidy will only be watching the race on TV from his home in Saratoga Springs, this time around he's pulling for the horse from the West Coast, California Chrome, the favorite at 2-5 odds, to end the prolonged shortfall by taking the third jewel of the Triple Crown.

"It can really be a good influence on horse racing," says Cassidy. "I think it'd be a great shot in the arm. The weather prediction is good for Saturday and it's going to be a very large and contentious field, so it should be an exciting race.

"This year," he adds, "I'm hoping to see a Triple Crown winner."