Rafael Nadal and the rest of tennis' elite men are growing old, but Nadal is still the unforgiving French Open's reigning king. Plus: the women's tour is as healthy and exciting as it has been in a long time, and the Advanced Baseline ratings graded out rather well.

Here are some of the things we learned from two weeks in Paris.

The French Open is grueling in even the best conditions. The weather alternates between rainy spring and stifling summer, and for the men, Davis Cup ties aside, it is the only opportunity to play best-of-5 on clay. It is a grueling fortnight, and the winner is guaranteed to have survived long points, long matches, weather delays, and lots and lots of changes of shoes and socks.

On Sunday, in the men's French Open finals, this typically unforgiving tournament was particularly challenging. First, you had the weather, which was oppressively hot and humid and had both Rafael Nadal and Novak Djokovic questioning their mortality and the frailty of human existence. Djokovic-Nadal battles are more like marathons with jousting sticks than tennis matches, but this was different. Djokovic's eyes hollowed out sometime in the third set, and he was soon caught vomiting on camera. (He later admitted he had been struggling with stomach issues for a few days.) Nadal, meanwhile, was bent over between points late in the match.

But for Djokovic, there was another challenge: the crowd, which appeared dead set on watching Nadal's ninth coronation in Paris. "Rafa" chants started from nearly the moment Djokovic took the first set, and on Nadal's first match point, things turned rude. Djokovic made an errant toss on his second serve, and as the ball fell to the ground, the crowd booed. Because he made a bad toss. On match point. Predictably, Djokovic double-faulted, then gave the crowd a sarcastic thumbs up as he walked to the net. (I'd have used a different finger.)

It was an annoying moment -- one made stranger when Djokovic received his runner-up trophy and was given an ovation so long and vociferous that it forced him to tears -- but it obviously didn't prevent the right person from winning.

Nadal is mortal ... sort of

Rafael Nadal always falls to the ground when he wins a slam. He always pretends to bite the Coupes des Mousquetaires when posing for pictures. He is always gracious. But he was even more emotional than normal after taking down Djokovic on Sunday. The conditions almost certainly played a role, as did the back pain he was feeling late in the fourth set. But while his growing set of French Open titles -- now up to nine -- begins to feel more and more like an immortable, untoppable accomplishment, Nadal himself looks more mortal by the year.

Nobody puts his body through the wringer to win a match more than Rafael Nadal. Never mind that his best surface is the cruelest and most grueling, the one with the longest points and the longest rallies. Never mind that his forehand features so much torque and topspin that it appears his wrist will dislocate (and never relocate) at any moment. Nadal's grueling game puts so much demand on his feet and knees that they have, at times through the years, simply given out.

At 28, his body treats him at times like it is 35. His 14 slam titles (nine at the French Open, two at Wimbledon, two at the U.S. Open, and one at the Australian Open) are within three of Roger Federer's record, but catching up to Federer (especially with Federer still active and good enough for perhaps another run) will be particularly tricky. It seemed like a given that he would pass Federer a couple of years ago, but even with three titles in his last five slams, the man simply looks tired. And he knows as well as anybody that not even one more slam title is given.

"That's not forever," he said. "You have few more opportunities, yes, but you don't know if you're gonna win it again."

He also still looks like the greatest clay-courter of all-time, a man that is 90-1 all-time in best-of-five matches on the dirt. Djokovic seems to have surpassed Nadal on other surfaces, but he might never top the man from Mallorca on clay.

Women's tennis is in fantastic shape

In the last four women's slams, 13 players have occupied the 16 semifinal slots. Only Li Na, Aga Radwanska, and Eugenie Bouchard have reached two semifinals. Serena Williams has not. Neither have Maria Sharapova or Vika Azarenka. This could be a bad thing. There was plenty of parity in women's tennis from 2008-11, and that was primarily because there were almost no elite, injury-free players. Sharapova and both Williams sisters were battling injuries. Up-and-comers like Ana Ivanovic, Dinara Safina, Jelena Jankovic, and Caroline Wozniacki, all occupied the top spot in the rankings without actually dominating.

Perhaps we will end up saying the same thing about 2013-14. Perhaps Serena will never again discover her most dominant form. Perhaps Li Na will suddenly realize that she is indeed 32 years old. Maybe young players like Simona Halep and Eugenie Bouchard will hit a ceiling in their growth. Maybe mid-range players like Andrea Petkovic, Sabine Lisicki, and Dominika Cibulkova will never again reach the level of play that took them to the 2014 French Open semis, 2013 Wimbledon finals, and 2014 Aussie Open finals, respectively.

But this feels different. For one, the quality of both 2014 slams has been, to the naked eye, so much higher. When Serena lost to Ivanovic in Australia and Garbine Mugurza in Paris, the story was more about how well they played, not how iffy Serena looked. And in Sharapova-Halep on Saturday, we saw probably the most high-quality slam final since Azarenka-Williams at the 2012 U.S. Open.

Halep has surged from outside of the top 60 of the WTA rankings to the top five. Again, perhaps we'll look back at that upward mobility as a sign of WTA weakness. But it's hard to watch Halep play and use any form of the word "weak." Her game combines consistency, deft angles, and more power than most players of her stature create. Like Nadal, she can turn defense to offense in one shot. Like Federer, she finds angles you didn't know existed. And like Sharapova, she raised her game as far as it could go in the finals. That she lost tells you all you need to know about the way Sharapova played. With the match tied at 4-4 in the final set, Sharapova went out and seized the title, but Halep played well enough to retroactively claim any number of slam titles from the aforementioned 2008-10 window.

As of Monday morning, the WTA top 20 is chock full of players who have played truly elite ball at some point in recent history. Williams is still the top dog (and despite failing to defend almost any of the points from last year's French Open title, she still owns a 2,200-point lead over No. 2 Li Na), but even the best player in the world has failed to survive five straight slam matches in three of the last four slams. There is a well-defined old guard (Williams, Na, and U.S. Open semifinalist Flavia Penneta are all 32 and in the top 11) and a host of 22-and-under up-and-comers (No. 3 Halep, No. 12 Bouchard, No. 19 Sloane Stephens). And the middle generation still has time to thrive: Radwanska (No. 4), and Cibulkova are still only 25, Petra Kvitova, Lisicki, Azarenka (currently injured) are 24, and Wozniacki is 23. Hell, Sharapova is somehow only 28. There is depth here, and there are more young, exciting players -- 20-year old Serena conqueror Garbine Muguruza, 19-year old Madison Keys, 20-year old Laura Robson and Caroline Garcia, and 18-year old Taylor Townsend, who reached the third round in Paris, her first slam -- on the way.

The men are getting old 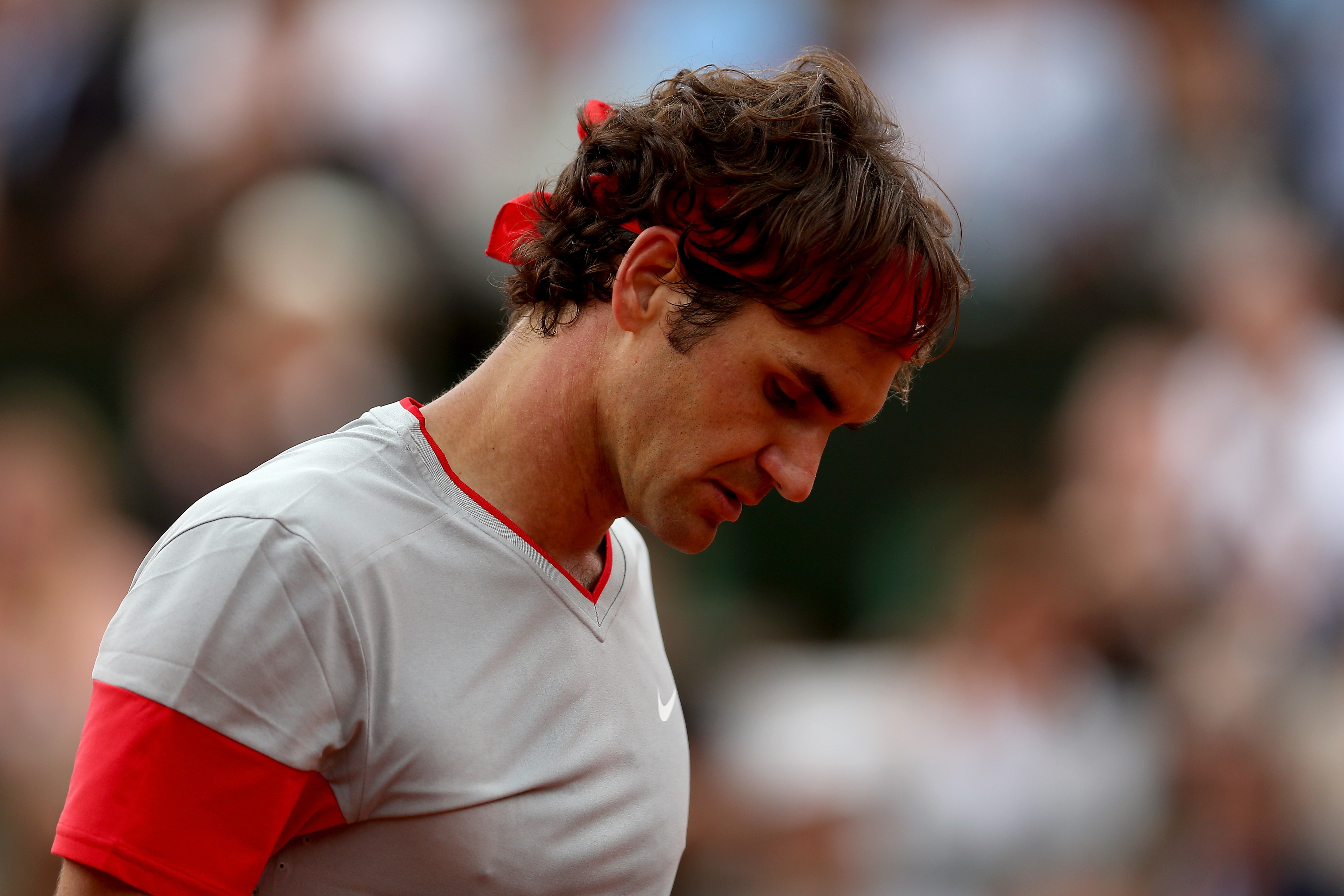 Nadal is still the clay-court master. Djokovic is still near the top of his game. Federer still has a pretty good fastball. Andy Murray is looking mostly healthy after back troubles sidelined him late in 2013. Tomas Berdych is still Berdyching at a pretty high level. David Ferrer is still basically impossible for anybody not named Nadal to beat on clay. The top tier of men's tennis is still in pretty good shape.

It's also old. The top six players in the ATP rankings are all at least 27 years old. Three of the six are at least 29. Only one player player in the top 11 is under 25.

Michael Chang and the 1989 French Open

We take a fond look back at the joyless soul who, 25 years ago, provided one of American sports' most joyful moments.

Michael Chang and the 1989 French Open

Milos Raonic, 23, showed fortitude in reaching the French Open quarterfinals despite not being a natural on clay. That's encouraging. And at 25, Ernests Gulbis may have finally taken a big step forward in Paris; long considered a high-ceiling player whose brain got in the way too frequently, Gulbis knocked out Federer and reached the French semifinals. Grigor Dimitrov, 23, is up to 13th in the world. So perhaps it's not too late to give up on the younger generation of the ATP tour. But it's hard to ignore the fact that Nadal reached (and won) his first slam final at 19, Djokovic reached his first and second (and won one) at 20, Federer reached his first (and won it) at 21, and Murray reached his first at 21. A late-arriving set of elite players is better than one that never actually arrives, but this group still has some work to do.

Advanced Baseline had a good tournament

There were quite a few noteworthy upsets in the French Open this year. There always are, with so many clay-court specialists serving as draw landmines, but this was a different level. Li Na and Stan Wawrinka, both Aussie Open champions, lost in the first round. Serena Williams lost in the second. Aga Radwanska and Ana Ivanovic lost in the third.

But despite the big-name exits, this tournament really played out more-or-less as expected. Using the Advanced Baseline clay-court rankings as our guide, the odds held up.

The odds are based mostly on three-set matches, and best-of-five tends to give favorites an extra edge (since taking three sets from a favorite is harder than taking two). But despite some big names falling, favorites actually won more frequently than expected.