The human body is a weird and amazing machine. It's easy to forget this, alone in the complacency and familiarity of one's own form and rhythms. But then one remembers the existence of runners with the mental and physical stamina to run a hundred miles or more at a stretch and soon the potential of the familiar starts to seem a lot more promising.

Post-race, the blood of a marathoner can paint a picture of diseased organs and biochemical decay. 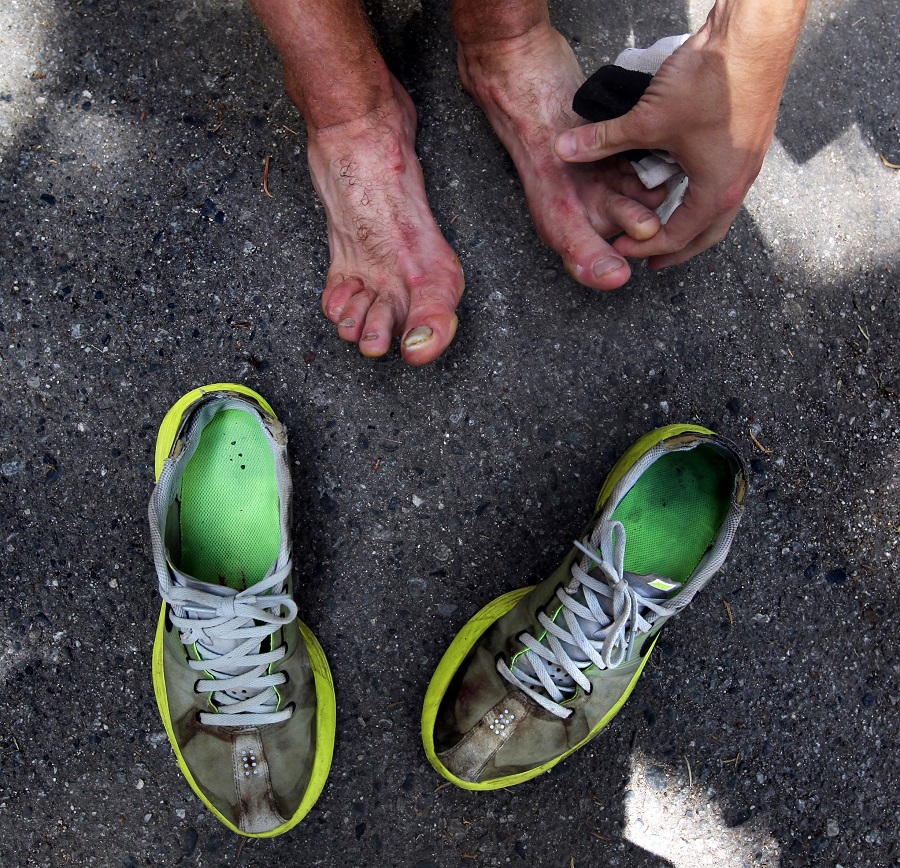 But such feats are not without consequence. It's well-known that marathons exert a serious toll on the body as it copes with the demands of running so far at such a pace. Post-race, the blood of a marathoner can paint a picture of diseased organs and biochemical decay thanks to compounds tossed off by the skeletal muscle, heart, and liver, such as troponin, a cardiac enzyme whose elevation signals trauma to the heart. Technically, an ultramarathon is any distance race over the standard 26.2 miles. So what happens to a body that runs even farther?

"The pain signals, or the cumulative fatigue, are nonlinear," according to Jimmy Dean Freeman, an ultrarunner and L.A.-based endurance coach. "So you might feel really poor at mile 30, and then better than you've ever felt that day at mile 60." He's about to experience a lot of nonlinear pain signals, with a planned six 100-mile ultras in the next 13 weeks. This does not bode well for his toenails, common casualties of the sport, which rivals ballerina feet in terms of sheer podiatric carnage.

That said, an ultra is more than just foot torture. Putting a body through such a race is a game of numbers. Freeman lets me in on one of the jokes in ultrarunning, that it's "basically an eating and drinking contest with a little exercise and scenery thrown in." Everything that goes into the body is carefully planned and calibrated; everything that comes out is monitored for signs of peril. Drinking the right amount of water at the correct rate, maintaining the proper electrolyte balance, eating enough of the right kind of calories, and knowing your body well enough to care for that jostling digestive system can each mean the difference between a complete race and a DNF.

Fueling itself is a huge challenge. The body stores glycogen in its liver and muscles; most people's bodies have enough glycogen to about last 20 miles, or a fifth of an ultra. The feeling of running out of sugar is aptly called "bonking"; or hitting a wall. Fat is harder to burn as fuel. What a runner eats during the race can mean the difference between finishing sweaty, or finishing covered in shit. I have a lot of love for runners who poop their pants and keep going. That's some "testament to the human spirit" shit right there. "As many people have failed to finish a hundred mile race based on gastrointestinal misadventures as they have through any sort of mental challenge or physical failure," Freeman said. "The stomach is a demon that slows down, or ends, a lot of days."

But there are worse foes. While pissing blood post-race is somewhat normal due to the hemolysis from repetitive foot-strikes, urine that's brown or black could signal renal failure. When small, exertional tears occur in muscle, the muscle is rebuilt stronger. During such a long race, significant muscle breakdown can occur, dumping myosin into the bloodstream to be filtered out by the kidneys. A dehydrated body, with an increased concentration of myosin in its sludgy blood, is hard enough on the kidneys; add multiple doses of NSAID pain-relievers (like ibuprofen), which shrink the kidneys, and you have a perfect storm for renal failure. There is not a consensus on how, exactly, myoglobin causes renal failure, rather a trio of suspects: obstruction of the delicate tubules of the kidneys, lack of oxygen, or a toxic reaction. Compared to kidneys that stop working, shitting your brains out thanks to hours of sugary drinks and a sloshing gut seems like a quaint right of passage.

It's important to note that renal failure is a rare side-effect, and one that can be guarded against to a certain degree by careful monitoring and planning. Most runners won't land themselves in the hospital for a course of dialysis, but the specter of such injury should not be ignored.

Toenails bruise, turn black, and eventually fall off. Chafing can go from nuisance to Halloween-level gore.

Even when things go well, running 100 miles still brings a host of serious physiological and psychological effects on the body. Freeman tells me that most athletes lose the ability to thermoregulate somewhere after the 10 to 15 hour mark. "In races that have variable temperature, when an athlete fatigues to the point of not being able to run, I've seen people go hypothermic in 80 degrees." An enormous amount of heat is produced by skeletal muscle during running, and the body works hard to get rid of it; muscle temperatures of around 100 degrees Fahrenheit mean that vasodilation and evaporative cooling are a must to keep core temps down. Once a runner reaches the 50 mile point, if they haven't managed themselves well in terms of calories and hydration, if they're not in the proper shape to do the event, and especially if the temperature is below 80 degrees, shivering can occur. "The body's thermostat is off after a long period of running."

One big rule seems to be that minor inconveniences now could spell disaster later. Nipples slightly chafed by a new shirt during the first half of the race could be two bleeding orbs by the end of it. Feet swell, clogging once-well-fit shoes with fluid; toenails bruise, turn black, and eventually fall off. Chafing can go from nuisance to Halloween-level gore. You'd be amazed what a blister could do if you give it 100 miles of rubbing. 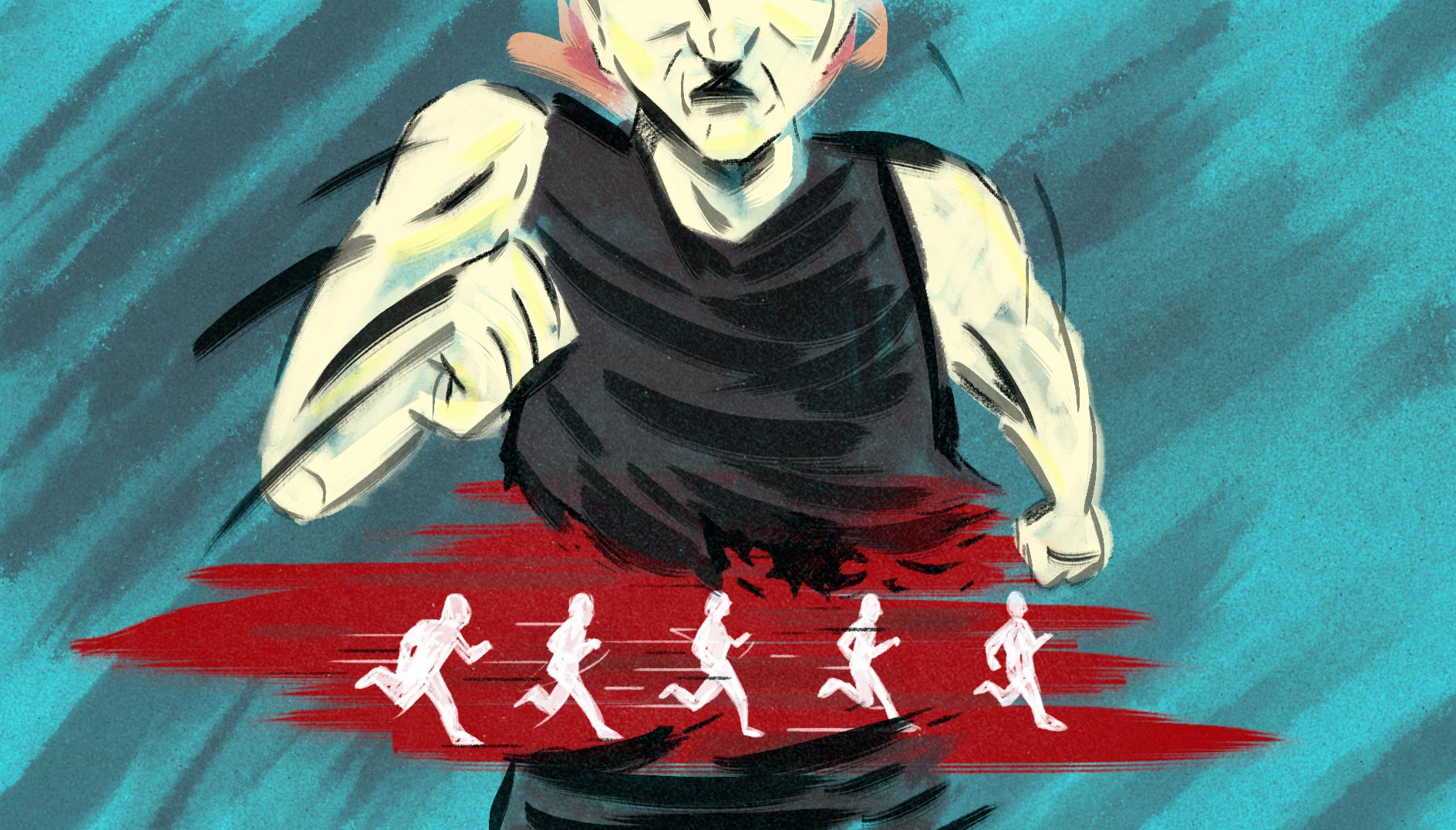 Battered bodies aside, though, ultras seem inexplicably safe; many potential ills can be mitigated to a certain degree with careful planning and attention. Some even suggest that they are easier on the body than marathons due to the softer surface of the trails versus paved roads, as well as the focus on grueling determination rather than speed. But no matter how you train and treat your body, there's one body part that's pretty impossible to train: the hypothalamus.

An organ about the size of an almond, located just above the brainstem, the hypothalamus controls a variety of processes, including hunger, thirst, thermoregulation, attachment, sleep, and fatigue. It's also responsible for our circadian rhythms; in short, you may well have plans to run for more than 24 hours, but eventually your hypothalamus is going to start screaming for sleep. Most of the races start at four or five in the morning; around the 18th to 22nd hour, when it's dark and has been dark for hours, the sleep urge gets loud. Freeman is all too familiar with the sensation. "You get to the point where you brain is just sending you the signals, like ‘okaaaay, time to go to sleep.'" He says the sleepiness is one of the biggest challenges of ultramarathons. "I've seen some sideways 30 minute miles going up the mountain, trying to keep my eyes open."

And with sleep deprivation comes another ultramarathon staple: hallucinations. Something about the mix of exhaustion and no sleep and repetitious solitude can lead to some amazing shows. Freeman, who has had some self-described "epic" hallucinations since his first 100, was kind enough to tell me about one of his more legendary experiences on the trail. He tells this tale very specifically — it's not so much what he saw, but what he thought about what he was seeing.

"I was at mile 95 or 96 of a run in western Pennsylvania. I'd been alone for 50 miles, and it's dark." Two in the morning dark, to be exact. "You're out in the middle of the woods where some creepy ass stuff happened, and so your mind could wander, and you would try not to look into the forest for fear of what you might see. You know, bears, graveyards, whatever.

"I first heard the tops of the trees cracking, like tree branches breaking above my head," Freeman said, describing the noise as a weird, whirring, buzzing sound. "I took my earphone out and it was really loud, it sounded like a woodchipper above me. There were these lights that I had seen before, coming from the top of this hill." The race itself was a looped course; in his deliriousness, he thought it was just the headlamps of some other runners. But when he got to the top of the hill, at the top of the trail, it was clear he'd been mistaken. The lights were still in the same position, way above his head. "I saw these lights and some spinning stuff, and it freaking me out. I remember I turned my headlamp off and I dove behind a tree, and I thought to myself, this is ridiculous. They definitely have those predator heat-sensor tracking devices. Hiding behind a tree is not going to save me."

So he ran as fast as he could out of those woods. "This is the hilarious part: I was terrified that I was alone in this covered forest, but the moment I got out into the clear, I felt fine. I felt safe again. Stopping to talk to a local directing traffic on the trail, he asked the man if he'd seen anything up over that way. The man said yes, he saw something. What do you suppose that was?" Freeman asked. "Well, it wasn't the moon, the moon's over there," the man replied. "In this part of Pennsylvania, it was either some hillbillies or a UFO."

And so, with barely a blip left in this 100 mile slog, Freeman began to laugh. "It was just so funny to hear him say it unprompted that I just started laughing at the ridiculousness of it all."  With that, he took off down this foggy path towards the finish line. "I could barely see a couple feet ahead of me because the fog was so thick, and this little, tiny, must have been 4-6 pound tabby kitten, started running alongside me in the fog at like a 10 minute per mile pace, for like a mile and a half." Earlier that day, he'd seen the cat a few times before on the three loop course, but Freeman doesn't know for sure if the cat actually running at his side. "I don't know if that was a hallucination, or just a really bizarre cat. I don't know. But that was a pretty funny race when I got done, talking about UFOs and 10-minute-mile-running kittens."

You know, maybe losing a couple blood-bruised post-race toenails is worth a story like that. 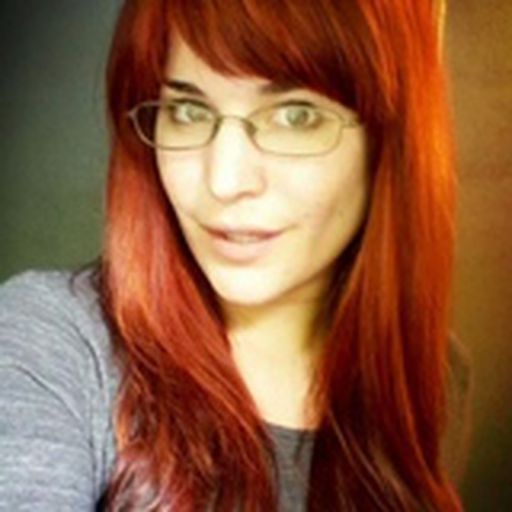 Leigh Cowart is a freelance journalist. Her work has appeared in Hazlitt, The Verge, Vice, Deadspin, Classical, The Nib, and Sports On Earth, among others. She really liked Prince Fielder's nudie magazine cover.