Just as eight riders help one man win the Maillot Jaune, it takes a near-batallion of support to make a Tour de France team function on a daily basis. And yet despite their precision and diligence, those well-laid plans still rest on hope.

Ask anyone who has competed in it, the Tour de France is a hot flash in a feverish sports season. "It's a tree compared to a branch, 10 times bigger than any other race." It's early wake-ups, and precisely planned meals, little downtime and meetings with media. There is press -- so much press -- hovering around staging areas in start and finish towns, crushing riders too tired to be angry.

It's stress echoed and then absorbed by those tasked with keeping riders sane; a level of tension such that it's all you can do to keep from going into rigor mortis. When I told one team's communications manager I would be driving along the last nine stages of the Tour de France, he told me to plot my escape. He said that the only time he worked the race, he was so caught off guard by the fatigue that he was forced to pay attention at every moment, except for the 15 minutes he stole every so often to read his book. He had never done anything so intense, and isn't sure how he is going to make it through his second one. 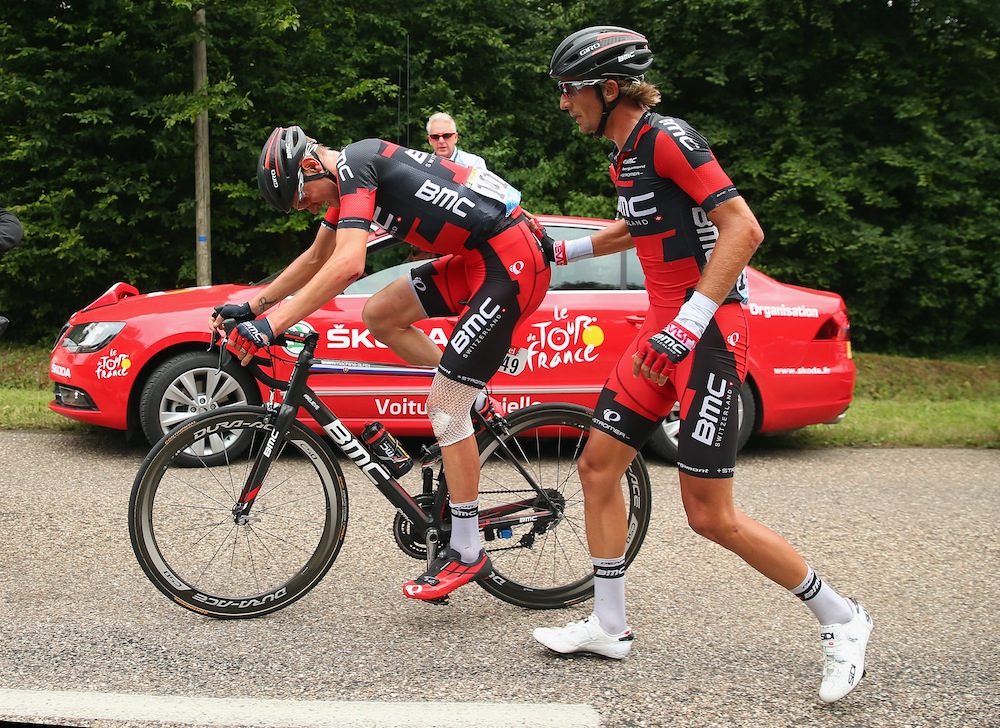 In addition to the nine riders, this is what a racing team looks like:

The riders are still asleep when the day begins for everyone else. The mechanics and the soigneurs have to be on top of their tasks sooner than anyone. The mechanics handle the bikes, and should have tires inflated and gear loaded into the team cars by about 8:30 a.m. The cars are packed so that the bike of the team's most important man that day -- perhaps a general classification contender, or a top sprinter -- is on the outer right hand side of the bike rack. The bike of his best teammate or domestique -- think Richie Porte to Chris Froome in 2013 and 2014, or Froome to Bradley Wiggins in 2012 -- gets the spot on the outside left.

the soigneurs perform perhaps their most vital function: evening massages for whoever wants one. Everyone always wants one.

The soigneurs take care of the riders. They are also up early, preparing food and mixing electrolyte packets with water to be handed out to the team during that day's stage. They pack everything in musettes, sacks filled with the goods to be snatched on the fly at a mid-point of the stage by starved riders. The soigneurs must then drive hellbent towards the finish, navigating the back roads that haven't yet been closed off by gendarmes. There, they greet riders at the line, help them walk to the bus, and stave off the press -- again, there's a lot press. Later, the soigneurs collect wet and sweaty kits for the wash, then perform perhaps their most vital function: evening massages for whoever wants one. Everyone always wants one.

That includes the race directors, who drive and coordinate the two team cars out of a procession of 44 behind the peloton, ready to mash the gas pedal if one of their riders crashes or, more happily, gets in a breakaway. They use a system of radios to direct everything: 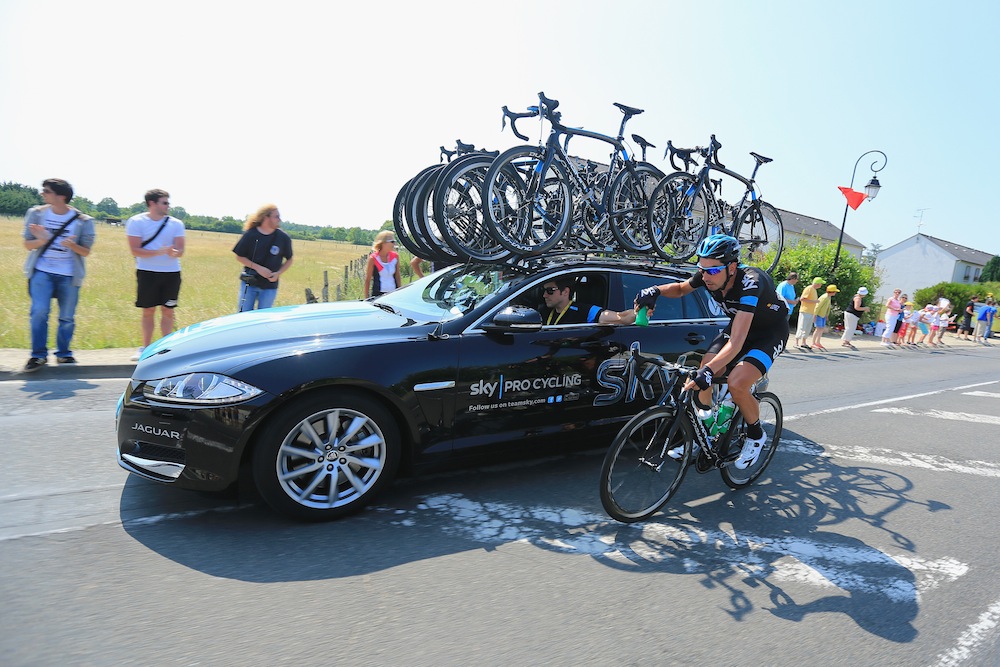 Cars follow the peloton according to the team rankings, from best to worst. That means that at the moment, Astana drives the first car (and 23rd, or first in the next set of cars) behind the peloton, followed by Belkin, Team Sky, and on down the line to France's Bretagne-Seche Environnement. Positioning is vitally important during each stage. Front cars can come to the aide of their riders much sooner and more easily, saving them precious time against the competition.

Cars cannot break out of procession order until someone on the one-way race radio says they can. Conditions for this include: a rider is in a breakaway that is at least one minute ahead of the peloton, a rider just crashed, or a rider is in need of medical assistance. The procession drives on the right side of the road so that cars that get called up to cyclists can pass on the left. This of course assumes two lanes exist. God help you if your team leader slips on a hairpin descent in the Alps.

Everything to know about the Tour de France

Are you just catching up on the Tour de France? Here's a helpful guide to use as cycling's biggest test winds through France.

The Tour de France is a stubborn anachronism among sports. Like its host country, you may love it or hate it, but you can't deny its unique place among the world's major sporting events.

The race radio lords over all, but it isn't infallible. Stage 16 during of the Giro d'Italia in May was the best example of this, when bad weather made for a harrowing descent from the race's highest peak. Some took a word of caution from race commentators as an announcement that the race would be neutralized -- that is to say, effectively canceled -- and eased up. Others -- like eventual winner Nairo Quintana -- bombed down the mountain and gained precious minutes on other general classification contenders. Never mind that the confusion reached the Giro's own Twitter account, the rest of the field was stuck behind an insurmountable gap to Quintana, perhaps the world's best climber (and an unfortunate Tour de France absentee).

But on occasion everything goes more or less to plan -- potential problems are quickly snuffed out, the equipment works, the riders get their mid-stage pick-me-ups, the weather complies and legs feel fresh -- and you have a man brazenly leaving the peloton on his own. He needs one last boost, so you ping your communications manager in the other car and tell him to get to the 60-kilometers-to-go mark ready with an impromptu water bottle. The communications manager is now no longer the team's resident mediaite, but its only chance to win the day. He has to navigate a landscape he is only familiar with in abstract, but he is deft and makes the handoff in time. And at that moment hope is at its highest.

The entire enterprise can thus be summarized as hope management -- taking care of everything in your control so that for the last few meters of a long day you are free to listen to the finish and pray. A job well done leaves only the hope that the guy on the bike doesn't fuck the whole thing up.