Pierre Thomas is running out of time

Pierre Thomas has consistently been on the cusp of being an effective starting running back. Will 2014 be his year?

Share All sharing options for: Pierre Thomas is running out of time

"I was crossing my fingers hoping I wasn't gonna get traded," Saints running back Pierre Thomas told Mike Triplett of ESPN.

He played in exactly 50 percent of the team's offensive snaps last season. In his seventh NFL season, Thomas did not post career highs in any notable stat. On top of that, New Orleans had some salary cap issues it needed to sort out this offseason, and Thomas was one of the players many thought could be on his way out given his lack of production and the other backs on New Orleans' roster. In the end, Darren Sproles ended up going elsewhere, and Thomas is still around. But he's got limited chances remaining.

Just going by how he came into the league, Thomas may be considered an overachiever. But somewhere along the way since being undrafted in 2007, Thomas picked up expectations, and it might have something to do with his strong 2009 campaign. That year, he played in 14 games and carried the ball 147 times for 793 yards with six touchdowns and a per-carry average of 5.4 yards.

That season, the Saints were still looking for a solid running back to be their starter. Mike Bell was the guy behind Thomas, with 654 yards and five touchdowns, which itself should be plenty perspective. So heading into 2010, Thomas was considered the starter, ahead of guys like Reggie Bush and Chris Ivory. Unfortunately for Thomas, he struggled.

He only played in six games due to injury, but he played poorly before sustaining said injury as well. Through those six games, he had a per-carry average of just 3.2 yards, allowing Ivory to take the bulk of the carries and, as a result, the team lead in rushing yards.

In each of the next three seasons, Thomas got his opportunities, however. New Orleans still didn't quite have the running back position settled, as Mark Ingram didn't pan out after being made a first round pick, and Thomas never made it back to 2009 form. That's despite getting 110, 105 and 147 carries between 2011-13. Thomas has exceeded expectations as an undrafted free agent, but he's disappointed as a starter time and time again. 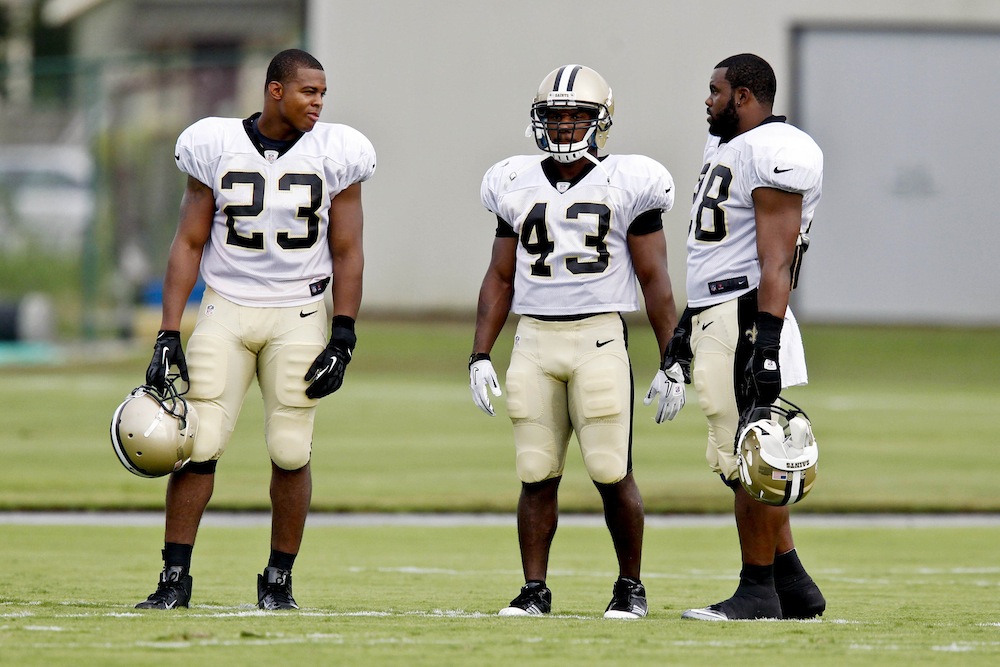 Thomas still looks like a starting-caliber running back, but with seven seasons already under his belt, he's running out of time to show it. At this point, his spot on an NFL roster is anything but guaranteed, so the stakes are incredibly high for him. For the Saints, it doesn't look like they've got another running back who could wind up starting, so if Thomas doesn't pan out, it's back to the drawing board.

This offseason, the Saints signed Thomas to a two-year contract extension, which will keep him in New Orleans through the 2016 season. He's getting $6.9 million over three years, which is a solid chunk of change for a running back in today's NFL. It's not out of the realm of possibility that the Saints cut him if he doesn't have a big season, especially given that he expected that he'd be released this offseason.

The Saints will never be a run-first team so long as Drew Brees is the quarterback. That's why Thomas putting up just about 800 yards in 2009 was considered an excellent season -- that's simply what's expected of a quality starter when your quarterback is breaking or getting close to breaking NFL passing records.

At this point, his spot on an NFL roster is anything but guaranteed, so the stakes are incredibly high

With 549 yards and two touchdowns in 2013, Thomas isn't too far from what's expected of him. But rushing for an average of 3.7 yards-per-carry last season is definitely not a good sign. That's his lowest total since his injury-shortened 2010 campaign. Confidence in Thomas being anything other than the same player he's been for the last couple seasons has to be low.

But that doesn't mean he can't be successful in 2014. The Saints will give him every opportunity to come in and be the starter, as evidenced by the contract they gave him this offseason.