Miles Austin hoping to return to form with Browns

Miles Austin signed a "prove it" deal with the Cleveland Browns this offseason. Can he return to 2009-10 form?

Share All sharing options for: Miles Austin hoping to return to form with Browns

From there, Austin had three more games of over 100 yards, and another two with 90 or more, before that season came to an end. He firmly established himself among the NFL's elite receivers, with 1,320 receiving yards and 11 touchdowns over the course of that season.

He never equaled that feat again, but he did eclipse 1,000 yards a second time in 2010, and came close in 2012. But since 2009, he's had one middling season and one particularly poor campaign, the latter of which happens to be his most recent in 2013. So what went wrong? For the most part, injuries are to blame for Austin's lacking play.

Now, Austin is with the Cleveland Browns, having signed a one-year, $2 million contract with only $300,000 guaranteed -- a "prove it" deal if there ever was one. His spot on that roster, his spot on the depth chart and his future in the NFL depend on him making himself useful early and often going forward. 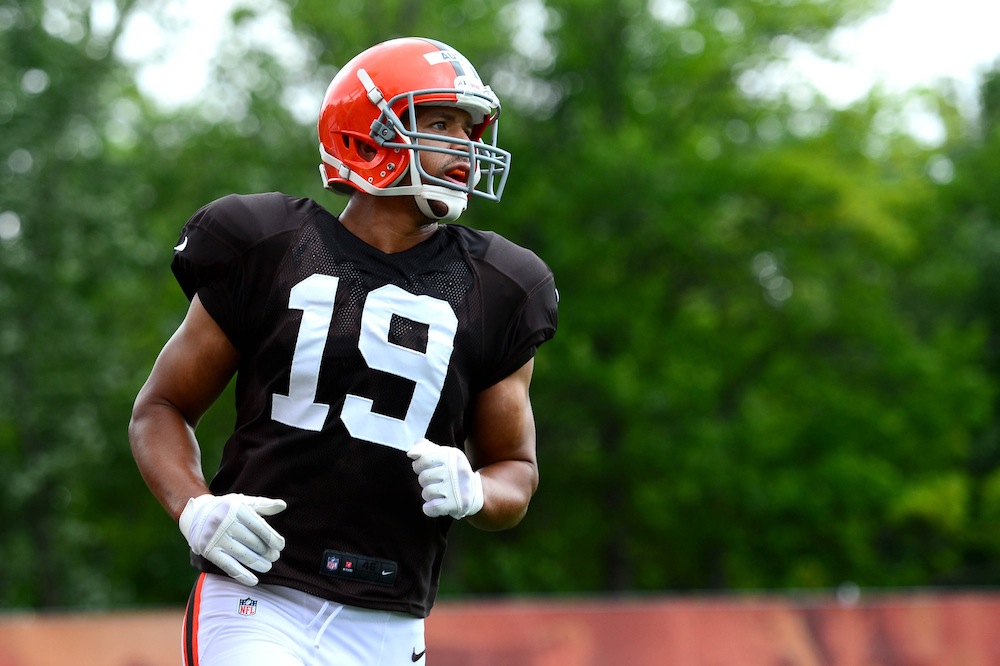 Austin plays like a No. 1 wide receiver, and in 2009 and 2010, that's exactly what he was for the Cowboys. He played against top defensive backs and he often won those matchups, but injuries have severely limited his career. In 2011, after consecutive 1,000-yard seasons, Austin played in just 10 games, and didn't look nearly as explosive in the games he did play.

He finished that season with 579 yards and seven touchdowns, respectable numbers given that he missed six games. Still, he didn't look quite as fast or explosive when he was on the field. He did manage to improve in 2012, when he stayed healthy for the entirety of the season, but he still managed to fly under the radar. Austin caught 66 passes for 943 yards and six touchdowns that year.

Looking at the Contract for Browns WR Miles Austin

Looking at the Contract for Browns WR Miles Austin

Dez Bryant and Jason Witten both had over 1,000 yards that season, which is one reason Austin went under the radar. So when he struggled out of the gate in 2013, many acted as though he'd been a bad player for multiple seasons. That wasn't the case, but it didn't change the fact that Austin was nearly invisible in multiple games last year. He caught just 24 of the 49 passes thrown his way, for 244 yards with no touchdowns.

The injuries he's dealt with are numerous. They started in 2008, before he broke out. He sustained multiple knee injuries that ultimately kept him out of four games that year. Both the 2009 and 2010 seasons went without him sustaining any injuries, and they were also his best. In 2011, he dealt with multiple hamstring injuries that led to him missing six games. Last season, it was more of the same with hamstring injuries forcing him out of five games.

Eventually, Austin simply fell behind everyone else on the depth chart. Cole Beasley, who finished 2013 with 368 yards and two touchdowns, was ahead of Austin ... even when he was healthy.

Dallas parted ways with Austin this offseason, and the Browns snatched him up. Cleveland is in a tough position at the wide receiver position, which is why Austin is getting his chance, but his contract is small for a guy who has put up the kind of numbers he's put up in the past. There simply appears to be no confidence in his ability to stay healthy.

For the Browns, they have little investment in Austin. If he doesn't pan out, he was simply a guy they took a chance on who didn't yield rewards. Of course, the potential upside is huge given that Josh Gordon is facing a lengthy suspension, a rookie quarterback in Johnny Manziel and the general lack of talent at the receiver position.

This is a tough league for aging receivers

For Austin himself, this is his chance to prolong his career and earn a bigger and better contract heading into 2015. He's 30 years old and this is really his last chance to return to form or even give a team confidence in his ability to start. This is a tough league foraging receivers who don't to produce. Those guys don't often get a lot of chances to succeed.

A middling receiver over the age of 30 has limited time to show he can still have a positive impact on a team before he simply becomes "that guy you call if someone gets injured." For receivers, what you've done in the past has little merit on the here and now. If he comes out of the gate with multiple strong games, he could even earn a contract extension before the end of the season.  If he doesn't perform well, though, he could find himself out of a job heading into next season, or even at some point in 2014. As noted by the folks at Dawgs By Nature, the Browns wouldn't take a big hit in dead money if they released Austin sooner rather than later.

The Browns have been one of the most unstable organizations in the NFL in recent years, so the benefit of the doubt for this new regime is basically nonexistent. Still, they picked a new coach after a very long search, got the quarterback everyone believes is the guy they wanted, and appear ready to make strides. Already boasting a strong defense, concentrating on the offense will be a focal point in 2014.

Austin will be right in the middle of that, catching passes from Manziel. He will get every opportunity to start and be Manziel's top target, and if he's healthy he could easily flourish in that role. Austin will be 30 years old when the 2014 season gets underway, but he's not so far removed from having productive games -- he caught 10 passes for 72 yards in the opener against the New York Giants last year.

In short: Austin will get his chances, and it's up to him to make the most of them.