The only linebacker who mattered

Forget the touchdown dances, Hall of Fame middle linebacker Mike Singletary made hitting something to smile about to a generation of NFL fans who came of age in the 1980s.

Share All sharing options for: The only linebacker who mattered

I imagine if you asked most NFL fans, the ones who started watching football around the mid-to-late 1990s, which player defined the middle linebacker position, their response would be Ray Lewis. It makes a lot of sense to choose Lewis. He played at an extremely high level for almost two decades starting in 1996. He helped the Baltimore Ravens win two Lombardi Trophies during that time. He was a ferocious hitter, a fantastic playmaker and one of the most intimidating players in NFL history.

I wouldn't necessarily disagree with the folks who choose Ray Lewis. But I was introduced to the game in the late 1970s, and having watched it for a bit longer, there's another name that comes to mind for me whenever someone brings up the middle linebacker position.

I wish that there was a way for the younger generation to know what it was like to watch Singletary play back in his heyday. Words don't seem adequate enough; neither does just throwing out accolades. And Singletary's list of accolades is long and distinguished: voted to the Pro Bowl 10 years straight, seven years to the All-Pro team, twice named the AP Defensive Player of the Year and elected to the Hall of Fame in 1998.

Physicality, speed and bad intentions were his calling cards.

Singletary was the kind of player you had to watch to really understand his impact on the game. Believe me, if you were watching those old dominating Bears defenses back in the day, you couldn't miss him if you tried. On a defense stacked with talent and several hall of famers, he was the ringleader. Singletary exhibited everything you look for in a linebacker ... and then some. Physicality, intimidation, top-notch preparation, speed, intensity and bad intentions were his calling cards.

It started before every play. Those eyes, man.

Moving around, getting everybody lined up and barking out orders, those eyes of his were wiiiide open. It appeared that not only could he see where everyone was and where everyone was supposed to be, but he seemed to know what play was coming as if he could see into the opposition's huddle. It was comical to watch at first, this guy with a perpetual surprised look on his face. But then the ball would be snapped, and it wasn't funny anymore.

I imagine Singletary's bug-eyed expression came to be seen by opposing players as terrifying, like he was wearing Michael Myers' Halloween mask. 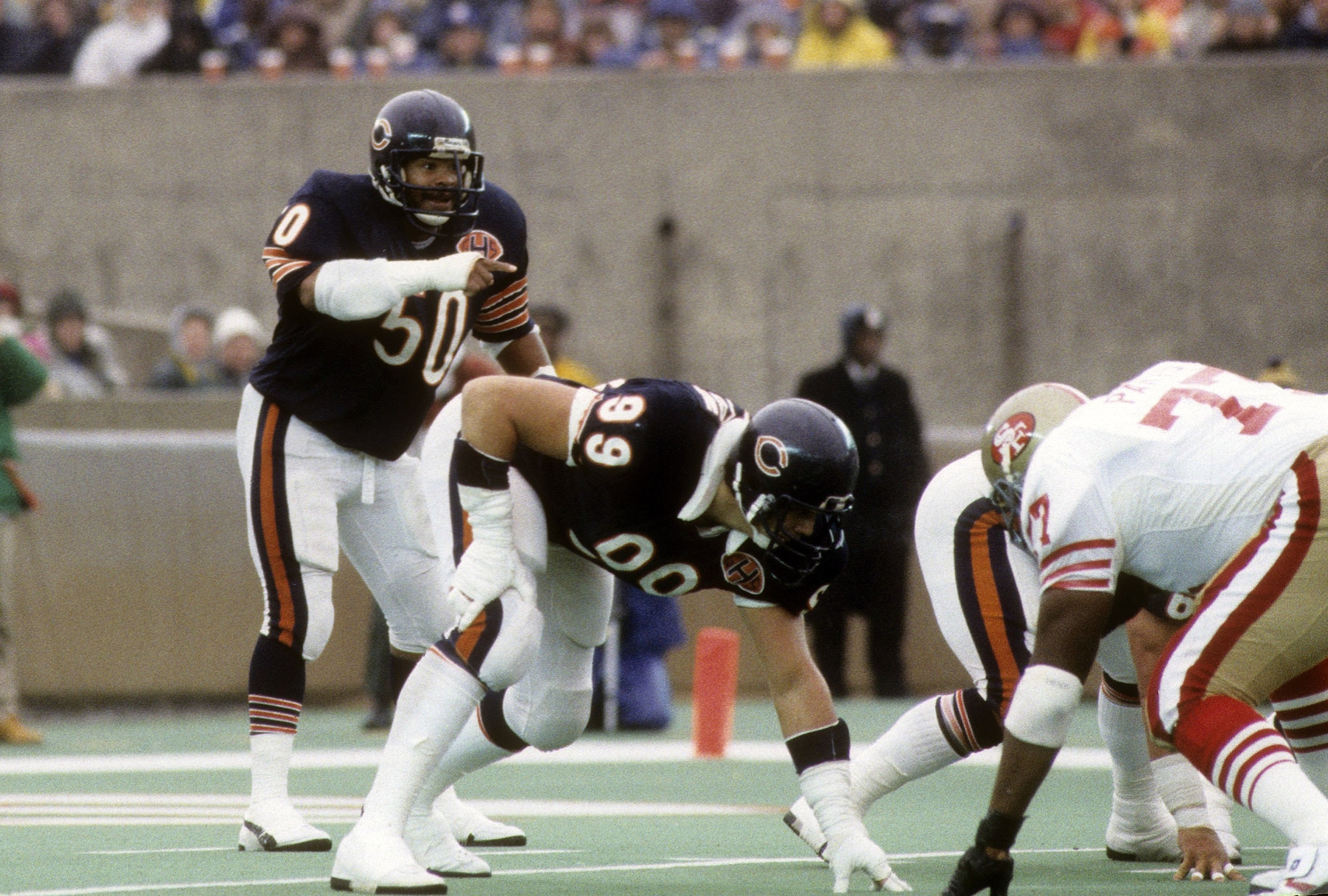 The guy was a human wrecking ball on the field. Nobody wanted to see him running in their direction if they had the ball in their hands. Singletary was what we call a "thumper," which basically means he was known for knocking the hell out of folks. At the same time, he managed to play with a controlled anger which allowed him to be a sure tackler. Time after time it would be Singletary and the opposing team's running back one-on-one in the hole, and time after time you'd see that running back go flying backwards and landing on his ass. It's not hard to imagine opposing running backs losing sleep the night before; playing against the Bears and Singletary featured prominently in their nightmares.

Comparatively, Singletary was probably below average size for a middle linebacker. He was relatively short at 6'0, and I doubt he ever weighed more than his listed weight of 230 pounds. He played the game with such a passion and zeal that he might as well have been built like Paul Bunyan.

It was that energy that he brought on every snap of every play of every game that made me such a fan of his. Singletary was all business before the play, but once the ball was snapped, he unleashed hell on the opposition and didn't mind telling them about it.

The whole time he was having fun. Watching the way he carried himself made me realize for the first time that you could actually have fun playing defense. He didn't just knock the hell out of people, he enjoyed knocking the hell out of people. He loved it and couldn't get enough of it. He played the game like it was something he was called to do.

Like most kids, I wanted to be on offense, catching touchdowns and doing end zone dances. It wasn't until I watched that vaunted Bears defense and Singletary in the middle of it that I ever associated hitting somebody with having fun. He inspired me. My high school position ended up being middle linebacker, and that was no coincidence. Singletary made playing defense look cool, damn near as cool as dancing after a touchdown reception. I imagine I wasn't the only teenager who got excited like that watching him play on Sundays.

So yeah, salute to Ray Lewis; I've got nothing against that at all. But for me growing up, there was only one middle linebacker who mattered: Mike Singletary.