Tour de France chronicle: How the French fans live up to a NASCAR infield

If you're going to the Tour de France, forget the start and finish towns. Park yourself next to a sprint.

Share All sharing options for: Tour de France chronicle: How the French fans live up to a NASCAR infield

PREIXAN, France -- To tell the truth, I was beginning to think that seeing the Tour de France in person isn't that much fun. Watching the start is certainly much better than the finish. Before riders take off you can see them milling around, warming up and talking to fans, and most of them are in a good mood. The same casual security practices are in place at the finish, but riders don't much want to sign autographs after an ascent finish at 45 degrees centigrade. Being at the finish also means listening to some guy hock products at you while you jostle for position near the line. It's not worth the effort.

Seeing a start is worth the effort, but it's also missing the point of the thing: Watching the fastest men on two wheels go fast. You'll have a nice morning at the starting line, but the annoying sense that you're being sold will still be there, and you won't get to see the peloton go by.

So after two days I worried I had exhausted the fun to be had at the Tour. Then I went to Sunday's intermediate sprint.

Little host towns are the right kind of crazy 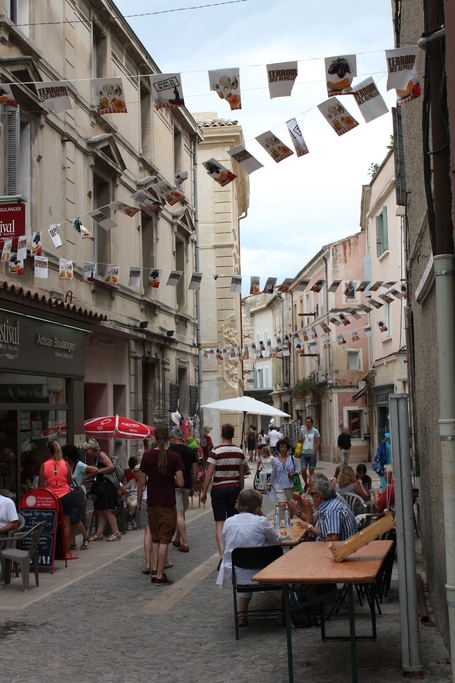 Chamrousse couldn't handle the crush of people that ascended upon the small Alpine town for the finish of Stage 13. Grenoble -- perhaps because it has been used as a staging town in the Tour de France 40 times already -- seemed indifferent to the event (as evidenced by my trouble finding where it was taking place.)

Saint-Rémy-de-Provence was as things should be. Because it wasn't hosting the finish, it didn't have a crush of media and fans. Because it has fewer than 11,000 residents, it is small enough to care that the world's biggest cycling event is running through its streets. There were more residents along the barricades than out-of-towners, and virtually no press. And so the town remained in character, but with its best face on.

That meant that the full market was out, with things like a pate made of boar and truffles, which was undervalued at 22 euros per kilo and with a single bite ensured that our children become honorable, cultured human beings. People tangoed to accordions, and the merry-go-round never had an empty horse though the line was never long.

Nostradamus was born in Saint-Remy, and Van Gogh painted 'Starry Night' there

Nothing to add. That level of street credit speaks for itself.

The caravane is stupid fun

The caravan going by at 60 mph, just whipping free shit at people https://t.co/H1YnhWtehn

This is something I'm excited to do more of, with an eventful hike up the Col du Tourmalet forthcoming, but the march beneath Provence's plane trees was plenty pretty. The walk was oddly quiet and peaceful, with spectators bunkered down in lawn chairs just outside their driveways.

Then everyone lost their minds when the caravane came.

The caravane is nothing more than a parade of the Tour's sponsors. It crawled through the finish line at Chamrousse, and I saw it then as little more than pandering to the hand that feeds.

And it was still that when it passed by while I stopped in the shade, but it was going 60 miles per hour now and, more importantly, hurling things at people. Grown men raced each other to pick up fun-size bags of processed pastries off the ground. A bag of Haribo gummy crocodiles stung me in the legs. Fans weren't concerned about their safety, however. They just wanted the most loot.

A proud man and a free sausage pic.twitter.com/u9yaa4S0xc

It was Halloween in reverse; the candy came to us with our maws wide open.

And I'm not sure the French have the temperament to achieve such a thing. I saw them celebrate a World Cup win over Nigeria at the Hotel de Ville and Paris, and though they were happy, they hadn't drunk themselves stupid as I had hoped.

But there were at least two drunk and stupid people next to the intermediate sprint just before Saint-Rémy. One was a (perhaps) German woman, who climbed a tin ladder while the weather was deciding whether to pour or drizzle. She was shouted down by the crowd, but not before demonstrating how well she can hop on one leg. The other was a man in the stucco house placed at the line. He came out with a white flag with a pirate on it, and tried to drape it over the face of the gendarmes as they rode by on motorcycles. He received glares.

This fella was quite drunk and also disturbing everyone! pic.twitter.com/7ILSaczfAJ

The rest of the crowd was more or less composed of the Tour's usual family demographic, but they were genuinely excited unlike the fans who were planted by Credit Lyonnais at the finish line in Chamrousse. They banged on the PMU boards as the radio announced approaching riders, and with the riders came the heavy rain.

The bad weather intensified as the riders approached, until everyone who had a poncho or umbrella was using it by the time Martin Elmiger and Jack Bauer crossed the line. An outright downpour broke out when the peloton hit, and as it rumbled past within arms reach so did thunder, so that it was impossible to tell where the noise came from. That's what it felt like, anyway. It was hard to keep track of everything that was happening in those moments. It's easy to fill in memory gaps in the most romantic way possible.

But the sun peeked out as soon as Tour workers began dismantling the finish line once the riders had passed. That I know happened exactly as I remember. 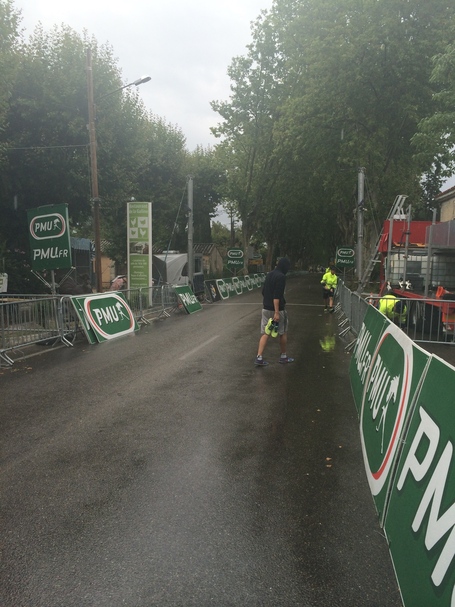