Tour de France chronicle: Why the distance between riders and fans will never change

The Tour de France should do something about the dangerous proximity of fans to riders, but doing so could hurt one of the world's best live sporting experiences.

Share All sharing options for: Tour de France chronicle: Why the distance between riders and fans will never change

The Tour de France isn't a bike race, that much is clear.

Which is to say, it's not only that. Better to think of it as a circus, or maybe a variety show, and a good one at that. Something that's broadening and funny in the first act, exhilarating then somber in the second. It doesn't feel overproduced. It plays to its strengths, which are the set pieces and the people.

The pilgrimage to your vantage point on the course is multifunctional. If you're in the Pyrenees, the air will be cool early in the morning, so you can start walking and be confident that your body will wake up in due course. The walk also helps you meet the day's cast of characters. Every person is his own individual, of course, but go to enough stages and you start to recognize a few subgroups:

Recognizable by the white hair and gloriously decorated RV. These fans have every necessary amenity, and always have the best food spreads. Your dedicated tailgater, basically, except the tailgate is set up every day for 24 straight days. The ones from Brittany will make sure you know they are from Brittany any way they can.

They're not really dressed for the occasion, or any occasion really -- maybe something like sandals, shorts and a sweater over a fleece. None of them knew the Tour de France was happening until they landed at their intended vacation and asked the hotel receptionist, "So what goes on around here?"

Probably male, 24-35 years old. They are your Borats, or guy in cow suit, or guy in Pamela Anderson suit, or just anything that might get a chuckle out of passerby and attention from passing cameras. They'll run next to cyclists, even occasionally give them a boost. This makes them the most loved and despised people along the side of the road.

They pretty much go on living their regular lives, but in the spirit of the thing they move their dining room table outside and do their drinking, smoking and card playing there instead. Or they just lean their head out of the second floor window, ash their cigarette as the riders go by, then duck back in their abode. In any case, they count.

Probably my favorite subgroup. The way-out-of-towners had to do a lot of planning to get here, so there's no damn way they're going to have a bad time. They're a couple celebrating their anniversary, or a violin/cycling aficionado from Austin, Texas, or a group of giddy Japanese fanatics whose favorite rider is Spain's Alberto Contador for reasons they can't explain in broken English. 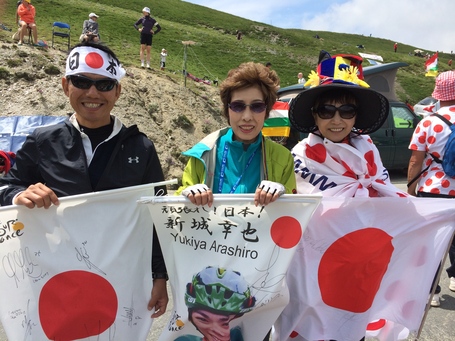 Everyone wakes up at about the same rate you do, so as you're nearing the summit of the Col du Tourmalet, say three kilometers from the summit, fans are finishing up painting the road, hanging flags and packing up breakfast. Trumpet calls elicit a learned response from about a dozen others, probably more Bretons. You see people wandering down from the summit with beer, and suddenly it feels like you're there.

You're at the Tour de France, and as you do it for the first time it dawns on you how little any of it has to do with cycling. Of course, the show wouldn't happen without the riders, and the moment they pass by is its own thing worth appreciating. After seeing regular folk try to climb Tourmalet, it's astonishing to see Tour riders make a bike surge up a 10 percent gradient with each drop of the pedal, never mind that they've already done more than 3,000 kilometers on the road in fewer than three weeks.

But while the main attraction lives up to expectations, the sideshow exceeds them, so that the racing seems diminished by comparison. It's empowering to be a spectator on the Tour de France. You can be on the road with the riders, literally on their own playing field, and though you wouldn't dare interact with them as they race, it does feel as though you are interacting. For a moment, you can occupy Vincenzo Nibali's consciousness, and that's much more than fans usually get from their favorite athletes. 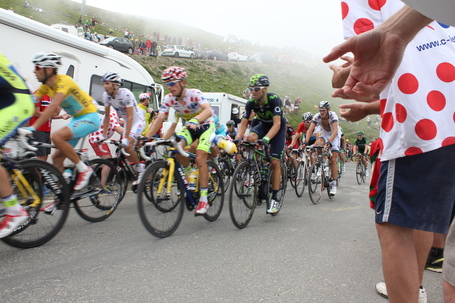 And of course, sometimes that goes wrong. Nibali is a well-composed athlete, and he maintained character when he thwacked the elbow of a girl who was talking on her cell phone with one foot in the road and her back turned to the riders. The incident could have turned out much worse, however, and it's good fortune that Nibali's masterful Tour wasn't derailed for something as dumb as someone else's inattention.

Taking place over 24 days and 3,663 kilometers of road, it's no surprise that the Tour claims to be the most heavily spectated annual sporting event in the world. With more people come more morons, and an increased possibility that someone will do something truly heinous.

But it can't change. Not to a large extent. The Tour needs us to host its bike race as much as we need the Tour as an excuse to let loose. 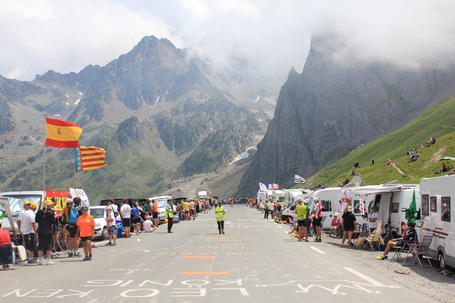 The Tour de France is bigger than the sport itself. That much is obvious on the trek back to the car. There's the exodus of people, sure, but you see the sponsor and press cars honk and jockey for position, too. On Pla d'Adet, the caravan line jogs left, then right, then left again before continuing straight on out of view behind a hill. Marching home, veterans of the Tour say sweet things about Poulidor and awful things about Hinault. French children are somehow still hyper, hopped up on Kinder eggs and Thibaut Pinot.

They've all finished celebrating another well-executed production of the Tour de France. And though they all took part in their own way, no one leaves unhappy.