Share All sharing options for: Tour de France chronicle: The life of a TdF super fan

A Belgian fan looked at me incredulously when I told her I didn't know who Marcus Burghardt was and why it was a big deal that she got a picture with him. I later found out that Burghardt is a German cyclist of modest repute, though one ought to be forgiven for not knowing the name of a man who has never finished higher than 58th in the Grand Boucle. He won a stage in 2008, but is probably most known for colliding with a dog that sauntered onto the course in 2007.

He is also this Belgian girl's favorite rider, and it's a fandom she takes seriously. She slowly pulled the necklace chain around her neck to reveal a Burghardt-shaped pendant that had been resting on her bosom. She didn't say why an obscure (to me) German rider was her favorite. I didn't think to ask. She turned away to flag down a setup worker at the sign-in podium who she knew.

A lot of people make annual sports pilgrimages. There are fans who have never missed a game played by their favorite team. But to commit to following cycling, live and year round, means somehow having weekdays off for weeks or months on end, as well as the means to purchase travel fare and find new accommodations on a nightly basis. Having a job correlates well with having money, so being a traveling cycling fan necessitates an extreme lifestyle off the road. One Dutchman I met, for example, has attended the Tour de France four straight years. He doesn't have a job (he lives off the Netherlands' social welfare system) and spends his nights in a tent along the side of the road. For bathing he uses rivers. Sometimes he eats cold canned food.

Others are more practical, but that doesn't make them any less extreme. 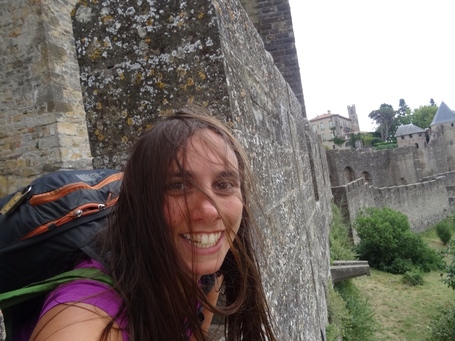 Here are the races that Kathryn has seen in 2014, in addition to every stage of this year's Tour de France:

-The Tour Down Under Peoples Choice Classic criterium

- The Tour Down Under x 6 stages

She's especially fond of the Garmin-Sharp team, and is proud to say she has seen its riders take the podium four times this year. When Jack Bauer led the breakaway on Stage 15 and nearly took the stage, she struggled to contain her excitement. Her brother is also an avid cycling fan, but slightly less so, so he tapes each stage to watch when he gets home from work. It took a lot of willpower for Kathryn not to email him immediately following the race. She isn't easily kept quiet.

To say she is from anywhere is misleading. Kathryn has lived in several parts of Canada, but was born in Toronto. She was working as a teacher in New York City three years ago just before she quit and started traveling. She lived a spartan lifestyle to save up enough money to wander the world. She had two years salary saved when she left, and has made the money last.

"I'm the kind of girl who would cross the street for a penny," she says, adding that she bought a pair of jeans and was disappointed that rough patches of thread were already forming. "I'm not buying another pair, this has to last."

Kathryn first saw the Tour de France live in 1994 when her family began taking annual excursions to Paris in time to see the final day of the race. She started going to every stage last year. Kathryn initially planned to go to just four stages, but ultimately saw 17 after cancelling other travel plans at the last minute.

Unsurprisingly, Kathryn has become well known by the organizers at the start and finish of each stage. She's on a first name basis with the hosts at the sign-up podium, Nicolas and Marc, who make sure her and any friends are properly entertained. The riders know her too, and will often stop to chat with her specifically at the barricades.

We stood together on Pla d'Adet, 1,500 meters from the finish on Stage 17, when she was recognized by a startled photographer.

Just by the sheer volume of her cycling adventures, Kathryn has a tendency to show up in a lot of cycling pictures, making her something of legend among photographers. She laughed when the photographer on Pla d'Adet asked to take a selfie with Kathryn so that she could show her colleague.

It helps that Kathryn stands out from the usual cycling crowd. She's tall and tan, and she makes noise with a tiny blue cowbell and a voice that carries for some distance down winding mountain roads. She makes connections by being endlessly friendly and curious. On occasion, workers will sneak her a bracelet granting her access to the media areas and television trucks. Her blog, Mini Bear Travels, is a fantastic view behind the scenes, which she documents by being one of the few people willing to get up at the first sign of light and make her way to the staging areas. 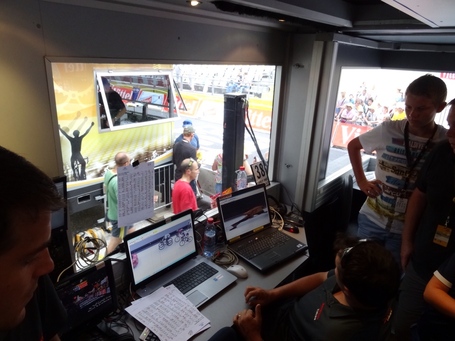 Kathryn's view of the technical booth at the finish line of Stage 15.

Committing to a life of travel means rarely seeing the same people twice, so Kathryn relishes seeing the familiar faces at every stop on the Tour and happily call them her friends.

The riders, too. Jens Voigt has made a habit of talking with Kathryn before and after races. The two initially met at a charity ride in April 2013, then again just before the double-climb up Alpe d'Huez at last year's Tour de France. Voigt mounted his bike after signing on for the stage, but he slammed the brakes after hearing Kathryn call his name.

The two chatted for several minutes before one of the hardest stages of the Tour. Voigt blew off a journalist to continue talking with Kathryn. Last year on the Champs-Élysées she found Voigt and introduced her brother, who was stunned.

Kathryn isn't sure how much longer she will stay on the road, but she figures she can afford at least one more year of traveling. There are a few things she misses about not having a permanent address: "I wish I knew my barber, or had a neighborhood sometimes." The drawbacks to staying put, in her mind, are greater, however. She might try to live in one spot for two months in Spain while she trains for a half-Ironman, but longer than that might be difficult.

"My family knew when I was very little that this is what Kathryn is going to do, she's going to leave us and we have to accept that," she says. "I really don't know when I'm going to stop."