Meet the teenagers who impersonated the NBA's best reporter

Why would anyone want to fool a bunch of people on Twitter with a fake Adrian Wojnarowski account? SB Nation talks to the two teenagers who briefly managed to pull off the trick.

Share All sharing options for: Meet the teenagers who impersonated the NBA's best reporter

To be a basketball fan during the rumor-washed days before the NBA Draft and in the first fervid days of free agency is mostly to watch Twitter. There is not always news there, but there is always noise. Things are developing, things are being discussed that probably won't happen, but could happen. Then, all of the above are given pro forma denials by the various parties involved. Every now and then, a team actually signs Jodie Meeks or something and Twitter people grouse about what an overpay it is.

For the most part, though, we are watching the churn. Which means that we are waiting on Woj.

Woj is Yahoo! Sports' Adrian Wojnarowski. He's not the only NBA writer who breaks news of transactions during the NBA offseason. This is confirmable and true, although the statement also looks sort of wrong sitting there like that. It feels like Woj is first on every signing and trade, which makes @WojYahooNBA seem like a Twitter feed broadcasting from 15 minutes into the future. This is to Woj's credit, of course. 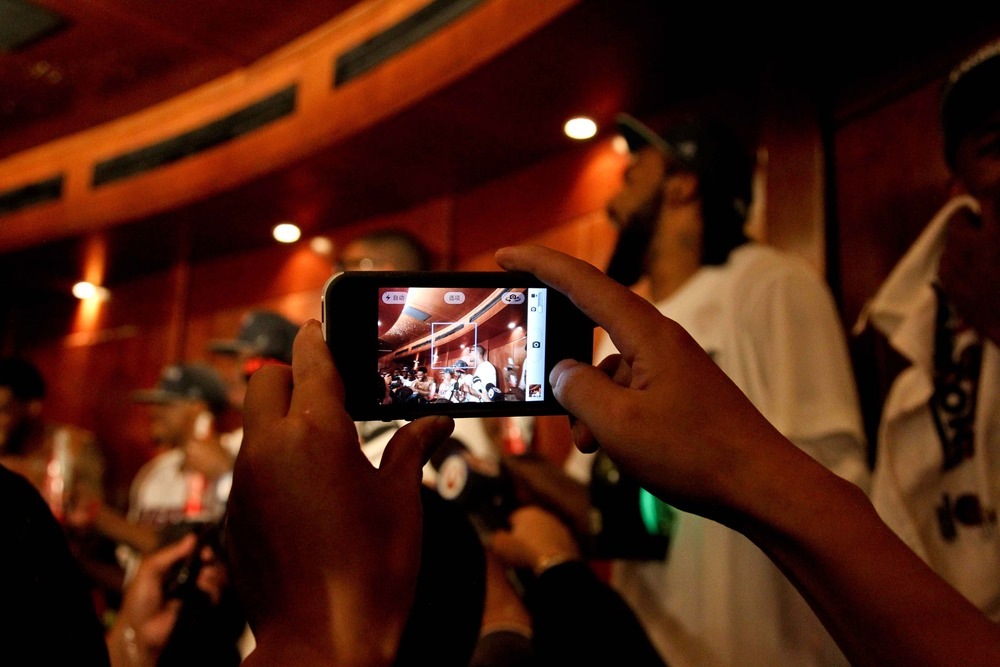 But it also means that if you wanted to prank on basketball fans by sending out fake news, the best way to do so would be to have fake news appear to originate with Woj, the infallible source of all real news. This is a thing that a great many people, for their own doofy reasons, are doing on Twitter right now. There are, as I write this, a @WojYahooIVBA, a @WojYahooNBA__ and a @WojYahooNABA on Twitter.

All three look like Adrian Wojnarowski's Twitter account (minus the verification check, naturally), and none of them are breaking NBA news. One has been inactive since 2012, another's most recent tweet involves the Lakers waiving Kobe Bryant (WHHHAAAAT?) and the third appears to be some sort of in-joke megaphone for this, which in turn seems to be a few dudes joking around about playing swimming pool basketball. This is Internet.

None of these accounts, though, managed to pull off what the now-suspended @WojoYahooNBA did earlier this week. That account, set up by two Florida high school kids, managed to fool a number of NBA writers and a larger number of NBA fans with some plausible but totally false transactions. Woj never reported that Luol Deng had signed with the Clippers. Wojo did that.

The professionals quickly recognized their error, the non-professionals blocked @WojoYahooNBA and reported it for spam and the account was suspended that night, but not before celebrating its triumph -- if that's the word for all this -- with a couple of gloat-tweets. The whole thing, from the first tweet to the inevitable account-suspension, took about an hour.

CRYING RT @WojoYahooNBA: uh, sources tell me I fooled way too many sportswriters

This, again, is Internet. It is extremely Internet. But also, what the hell is this? Why is this?

@wojoyahoonba I want to know why you do this

To find out, I spoke to Carl, a 17-year-old in Orlando (and, oddly, a Utah Jazz fan) who was one of the two people behind the account. "We're teens," he noted in our first correspondence, "don't worry." (Carl is @blockedbydp14 on Twitter; @marty_voisine, an 18-year-old in Miami, was his prank partner.) We discussed why they did it, how they did it, what it was like and mostly why the hell they did it.

The answer, of course, is This Is Internet, which is not really an answer at all. The more specific answers are below.

Tell me a little bit about how you and your buddy decided to do this. Obviously this is prime Woj Season, and everyone's watching him pretty hard. I get the timing. I just am curious about the motivation.

We've seen people do it before, and it just popped into our heads a little bit after 12 a.m. It's just so, so easy to make a fake account with a random email. It was set up in about five minutes. Not to mention the fact that people jump to conclusions very quickly. We knew if someone big RT'ed one of those tweets, we'd fake out a ton of fans. That's exactly what happened too. Didn't take very long to get those "OH MY GOODNESS" tweets. 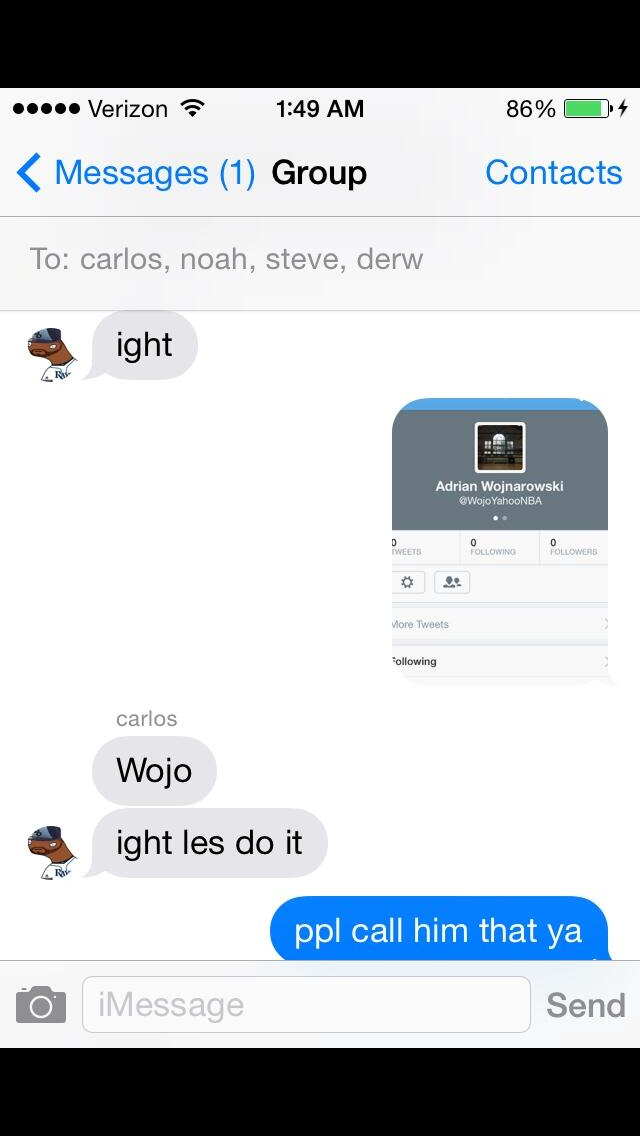 How did you identify Woj as the ideal vehicle for this, beyond the obvious he-is-the-dude-for-this-stuff reasons?

Woj is the man when it comes to NBA rumors, [and] we know that everyone knows who he is. His Twitter avi is recognizable, and so is that very long last name. Everything just fit perfectly, honestly, so we went with that. But of course we're fans of him, we follow Woj on Twitter and I know I always find myself stalking through his last few tweets to see if I missed anything during the day.

What goes into trying to make an effective fake Woj tweet? Did you try to emulate his style, or keep the news plausible, etc? The Deng one was fairly realistic and did fool some people who were probably pretty embarrassed about it. I assume that was the idea all along?

Just try to keep it as realistic as possible, make sure you include some hashtags, too. I looked at a few of his tweets just to get a feel for who was being mentioned quite a bit, and then we went forward with that and tweeted about Deng, [Lance] Stephenson, Larry Drew, etc. We did want the tweets to blow up all over Twitter, and people fell for it. It was meant to be funny, and it didn't look like many fans took it too hard. We got a few RT's from some established NBA writers, and we didn't mean for it to get that out of hand because I know they don't have time for those fake tweets.

Just to clarify, was there some satirical intent -- like, the first few weeks of the offseason are just Woj's world, everyone just slavishly/lazily absorbs the #WojBombs, and retweets them, and so on? Or was this just identifying an audience that could and would easily be pranked in this particular way?

No man, not at all. We did it because we wanted to see how gullible people could be. I know everyone is quick to believe what they read on Twitter, and that's why we did this. It's just entertaining to see people go nuts over something that hasn't really happened and completely ignore the fact that the account was fake. No disrespect to the sportswriters that actually fell for it. I know they're just trying to do their jobs, and it just so happened that our fake account resembled that of the real Woj. But we did get what we expected. Plenty of overreactions, humorous responses and some hate.

What was the response like? People telling you to fuck off, mostly?

Oh yeah. We got plenty of hate, but I was surprised that we didn't get more. A lot of people tried to get us suspended before the tweets really blew up, but once they did, I noticed everyone took it in a very humorous way after the realization that none of the tweets were true finally hit them. We obviously ended up getting suspended, but the crazy amount of RT's gave us some wiggle room to tweet some more stuff. 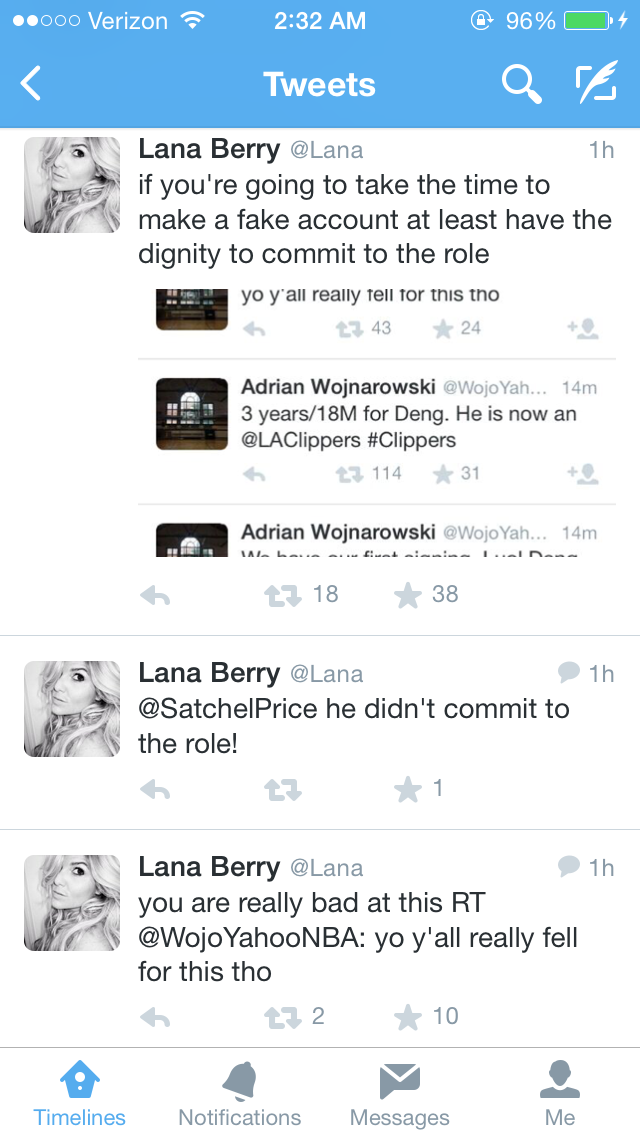 Right before you got suspended, you broke character and sort of celebrated your success. SB Nation contributor Lana Berry, among others, killed you for it. Did you just want to enjoy the moment before the Twitter Cops shut the party down?

People knew it was fake, and the account was on the verge of getting suspended, so I didn't really see the point in continuing to send false rumors. Plenty of those who actually fell for it found it to be quite funny when I tweeted that they had actually fallen for those tweets. As for Lana, she can hate, it's alright. It was entertaining, and we just wanted to go out with something before that pesky suspension finally got us.

Was this fun? Kind of a basic question, I know, but I honestly have a hard time even imagining what it's like to troll so many people simultaneously, and when I think about it I mostly feel weird.

It was ridiculously fun. We couldn't stop laughing when the tweets started getting so many RT's. It got to the point where I couldn't open my Twitter app. I guess it just goes to show you how gullible some people are. It's absolutely crazy. We noticed NBA accounts were tweeting that Stephenson was signing with the Bulls, which was obviously one of our fake tweets. RealGM had some forum members that thought the Deng signing was real. [Yahoo! Sports'] Marc Spears and [NBA.com's] Sekou Smith RT'ed us as well and that's when things really went crazy. I can definitely see why people would get annoyed, but this was honestly one of the funniest things I've done on Twitter.