Raji was part of a woeful Packers defense that gave up more than 2,000 rushing yards to opponents last season. Now, Raji and the Packers are hoping a move back to the middle of the defensive line can rejuvenate the run-stuffer.

Share All sharing options for: B.J. Raji isn't taking up space ... and that's a problem

To say that B.J. Raji was just taking up space on the Green Bay Packers' defensive line last season would be giving him too much credit -- after all, one of the primary duties of a 3-4 defensive end is to eat up space and allow the linebackers to fly around behind him. But even at 337 pounds, Raji struggled to hold his own during a critical contract year.

The result was lukewarm interest from the free agent market, and Raji eventually slinked back into Green Bay with a one-year, $4 million deal. Facing his second contract season in as many years, the gargantuan defender is under immense pressure to return to the form that once made him one of the premier 3-4 linemen in the NFL. 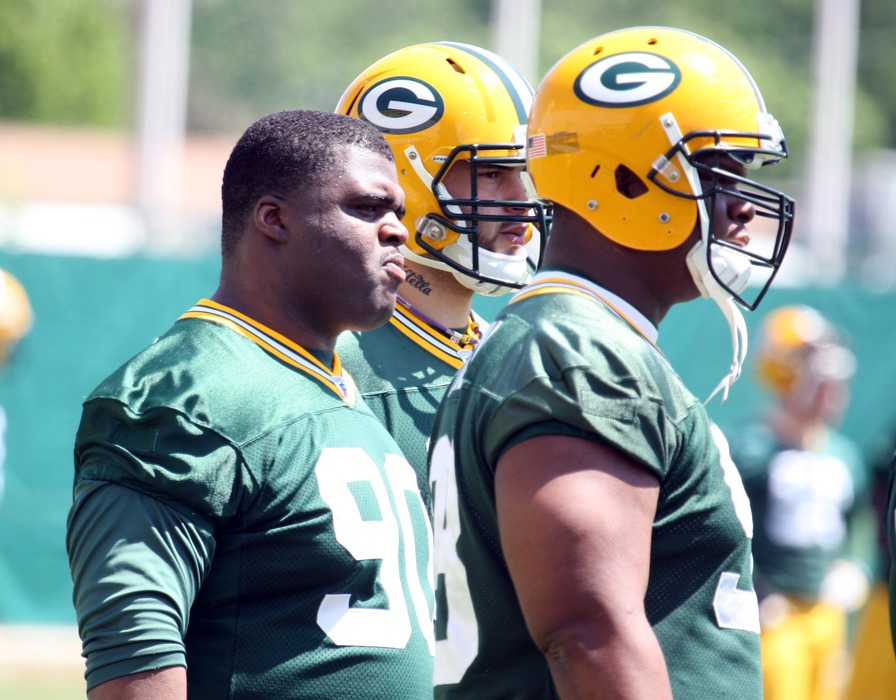 Raji arrived in Green Bay as the ninth overall pick of the 2009 draft and immediately became a disruptive force as a nose tackle in the middle of the Packers' 3-4 defense. In his second year, he played in over 80 percent of the defensive snaps and tallied 6.5 sacks. But after a lackluster 2011, the team opted to move him outside to the end spot.

The move looked like it was paying off in 2012, when Raji graded out as a top-10 3-4 defensive end at Pro Football Focus. But he declined again in 2013. Amidst a Green Bay defense that gave up 2,000 rushing yards for the first time since 2008, Raji recorded a career low in tackles and failed to make much of an impact. In 2012, he was responsible for 8.1 percent of all of the team's defensive run stops while he was on the field. Last season, that percentage dropped to 3.8.

It was reported midway through last season that Raji had spurned a multi-year offer from the Packers that would have paid him roughly $8 million per year. He held off, hoping to get better offers in free agency and, if nothing else, force Green Bay's offer up. But after his disappointing 2013, no one came calling. He was forced to take a one-year "prove it" deal worth half the annual salary of the original offer, with only $500,000 of the $4 million guaranteed.

In 2012, he was responsible for 8.1 percent of the team's defensive run stops while he was on the field. Last season, that percentage dropped to 3.8.

The importance of the 2014 season for Raji's financial future can't be understated. Packers blog Acme Packing Company sums it up:

If there was ever a financial incentive to motivate Raji towards a big year, this is it. If he fails to deliver for the second consecutive contract year, he'll spend the remainder of his NFL career going year to year rather than landing the long-term deal he desires.

One of the few favorable conditions Raji got on his new contract was the agreement that the Packers would move him back inside to nose tackle, replacing Ryan Pickett. For starters, nose tackles get paid more than 3-4 ends, which will help Raji's value when he hits the market again. More importantly, it returns Raji to the position that made him a breakout star in 2009 and 2010.

Aiding Raji's cause is the fact that Green Bay expects to have competent pass rushers surrounding him. Mike Daniels is coming off a 6.5-sack season, and though former first-round pick Datone Jones was hampered by an ankle injury as a rookie, he showed flashes of potential that could make him a breakout player in 2014. Throw in the free agent signing of Julius Peppers and a healthy Clay Matthews at the outside backer spots, and the Packers should be able to get into the backfield from multiple points of attack.

That should allow Raji to focus on his run defense and earning that multi-year contract he's been chasing.