Over the years, the Madden franchise has led the way in making life-like video games, from pixelated blobs to a look almost indistinguishable from the real thing. Sarah Kogod went to Baltimore to watch the EA team turn the Ravens into avatars.

Share All sharing options for: How Madden NFL turns players into pixels

Thanks to modern technology, realistic video game images are constantly blurring the lines between fantasy and reality. Recently, I got to sit in on a Madden NFL photo session with the Baltimore Ravens to learn how the pixelated players in classic versions have evolved into lifelike characters that make you forget it's just a game. 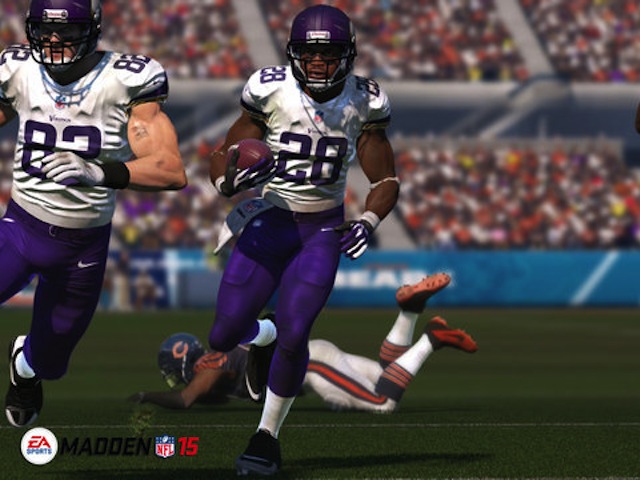 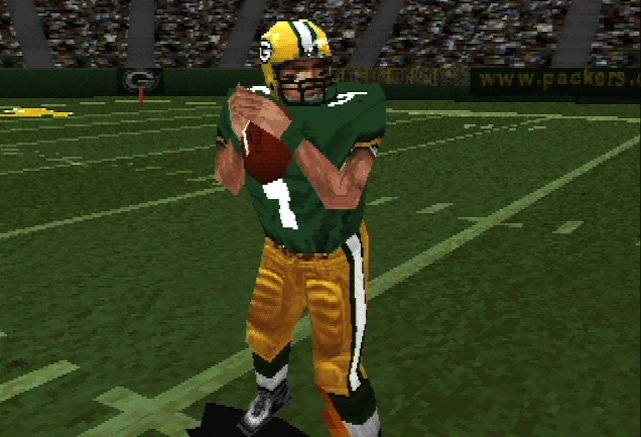 In the past, digital artists had to rely largely on stock photos to recreate players’ likenesses for the game. Eventually technology allowed them to use digital images for reference, but the previous camera system was a cumbersome, dome-shaped structure made up mostly of PVC pipes. It wasn’t very portable and the lack of mobility forced the team to get creative in order to capture multiple angles of each player.

"What I used to do is put a player on a stool and then turn the stool slowly as we took pictures," laughed Joe Warren, a senior lighting artist for EA Sports and Madden NFL. "And we had to rely on events like the Pro Bowl to get those pictures since we had a number of players all in the same place."

This year, a new camera setup allows them to travel to each team and get digital images of almost every player in the league, making an already authentic image exponentially more accurate.

The new rig is a structure pieced together by the company’s research and development team, using random household items. Its arms hold twelve DSL cameras in two rows of six, and are made up of parts from a television stand. The mechanism that raises and lowers the set of cameras is a wheelchair lift and the whole thing is controlled by a connected laptop. It can be packed up into two cases weighing about 100 pounds each, and checked on a plane, allowing the game developers to travel at will.

The new Madden NFL camera system is made up of parts from a television stand and a wheelchair rig to make it move. Twelve DSL cameras powered by a laptop capture the image. (Sarah Kogod)

Three Madden NFL gaming crews, each armed with their own setup, spent the offseason traveling to all 32 NFL teams during OTAs and training camps. Each player getting scanned sits in a chair facing the cameras and a click of a button on the attached laptop starts the process, setting off twelve automatic shutter clicks in rapid succession. Five seconds later, the first round of images is done. Two more rounds with the player’s head turned to the right and then left, and the system has gathered 36 shots in less than a minute.

As each Ravens player entered the room for their turn to be scanned, some had special requests. Defensive end Elvis Dumerville asked to be made "better looking than I actually am." Terrell Suggs requested that his hairline be modified to a more generous location and kicker Justin Tucker spent a significant amount of time perfecting his hair, only to be disappointed when he found out that they were scanning for faces only.

"We get those requests from every team," said game play designer, Clint Oldenburg. "But we like to stay as accurate as possible."

Once the images are gathered they are taken back to EA Sports where artists turn them into stripped down 3-dimensional heads before beginning the laborious process of applying details to each player’s face and giving them hair to match their current style.

The progression of Richard Sherman from photo to video game character. (courtesy of EA Sports and Madden NFL)

"Now that we’ve reached the point where the games look this realistic and life-like, we have to be accurate," said Gonzalez. "Any blemish that’s off, skin texture, any freckle, people catch that."

The designers also use a program that EA Sports created called Face Poser, which gives each player and coach a set of emotions. The entire process takes several days per player, so while you won’t see this newest version of all 1,696 NFL players in the Tuesday's Madden NFL release, the company is hoping to patch them in over time.

What the artists are to the players’ images, Oldenburg is to the game’s nuance. After being cut by Washington coming out of training camp in 2011, the former NFL offensive lineman went on to play in the UFL but couldn’t stay healthy. That same year the NCAA and EA Sports developed a partnership for former college players to work on the NCAA video game. Oldenburg, who has a journalism degree from Colorado State, applied for the opportunity.

"It was a 16-week internship and I figured I had nothing else to do," he said. "So I put together a cover letter and resume. Fortunately they chose me as one of two interns to go in there." 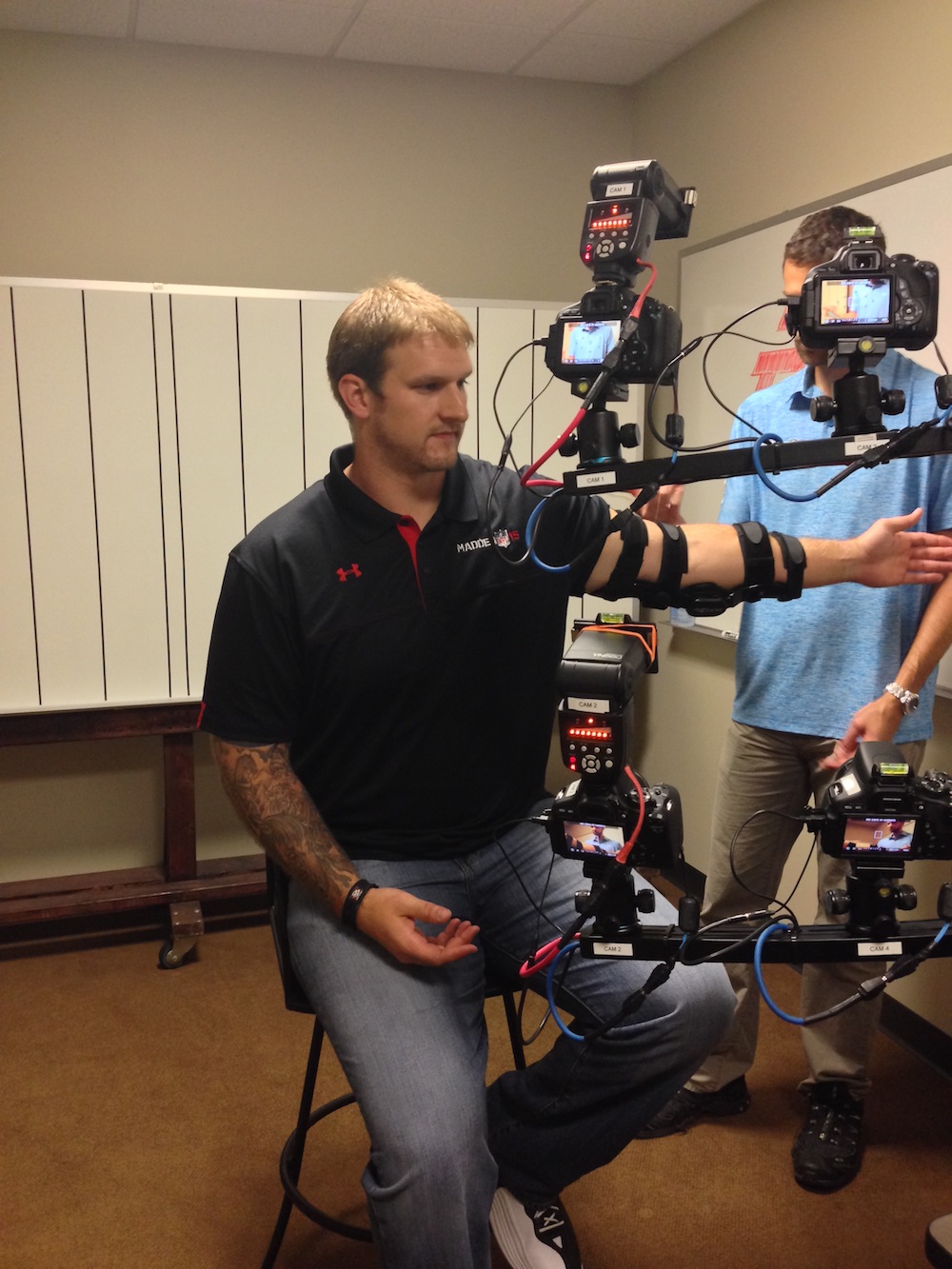 Ten weeks into the internship they offered him a full time job. Oldenburg, who had plans to go play in Canada later that year, hung up his cleats and began his career as a game play designer.

"[The designers] watch film, they watch football and they want to know, ‘What is that guy thinking? What is his technique? What’s his fundamentals? What’s the play?’" said Oldenburg. "That’s where I come in."

As realistic as the game is currently, there are still things that Oldenburg would like to see improve.

"Right now we can’t do all of the unique variations," he said, as he photographed a elbow brace for the artists at EA to reference. "I want to do different running styles, different movements. Making Calvin Johnson move different than Wes Welker."

Another area with room for improvement is the referees, who are currently generic. If you look closely, you’ll see Oldenberg’s face on one of the refs, but ultimately they hope to get the images of actual NFL officials inserted into the game.

The constraints of both time and memory space on the game’s disc prevent them from taking these steps, but each new innovation in technology brings them closer.

About those damn ratings

The Madden team says they rarely get complaints from players about how they look, but they do get harassed about the Madden ratings. Some players have even declined to sit for their scan in protest of their rating.

"Oh yeah, all the time," said Gonzalez, when I asked if any players have boycotted the process. "Usually it’s because they disagree with the way we rate the players. They think they’re rated too low."

Oldenburg confirmed, but wouldn’t throw any specific player under the bus.

"At least one or two guys a team aren’t happy with their ratings," he said. "Usually it’s in jest but some are serious."

I only had to wait a few minutes before seeing it firsthand.

"Who do I have to talk to about those Madden ratings?" I hear, as wide receiver Torrey Smith comes charging into the room. "Ya’ll trying to tell me I haven’t gotten better in two years?"

When the Madden NFL crew told Smith that they weren’t responsible for the ratings, he turned to me in an effort to plead his case.

Unfortunately for Smith, I don’t have such powers either. The man he wants is Donnie Moore, the ratings meister at EA who is tasked with updating the Madden ratings each week at his own discretion.

Smith pledged to pester Moore on Twitter until his rating changed. As he walked out the door, he turned around and made one more plea.

"Tell him I worked hard this offseason," he said earnestly. "He’s gotta give me some credit."