Stan Kroenke isn't just scheming to move the Rams to Los Angeles, he's got a plan to take over the world!

There's a lot that goes into being a compelling villain in a James Bond film. You need to convey cunning, heartlessness, and just a tinge of insanity, and you also have to look the part. While there are a variety of ways you can pull off the appearance of Insane Criminal Mastermind, some NFL owners are better suited to be Bond villains than other. We rank them by that metric below.

Absolutely looks like he has a retractable floor in his office with a pit of acid underneath it. Picture a tanker driving into a secure military facility with KROENKE CHEMICAL on the side of it. Ol' 007 is for sure following that truck and finding out Stan Kroenke's been selling the Army mind control gas that only he can control.

"Do you expect me to vote for a new stadium, Wilfstache?"
"No, Mr. Bond, I expect you to subsidize!"

Falls more into the "deranged killer with an old grudge" category of Bond villains. Probably has some weird physical attribute like the inability to bleed.

U.S. Senator who's actually third in command for a major international terrorist group.

Secretary of the Interior who's actually sixth in command for a major international terrorist group.

Arthur Blank looks like the Bond villain with a scheme that's purely focused on making him super-rich rather than fulfilling some sociopolitical goal. He'd build a bomb that disabled every airplane in the world and then charge crazy prices for cruise ship tickets.

Turns out to be a former Soviet general who stole a shipping container full of missiles, but it turns out none of them work.

"Hey!" you're saying. "Malcolm Glazer passed away over a year ago!" You're right, but the Buccaneers still list him as Owner/President on THEIR OWN WEBSITE. So until the franchise denies it, I have to assume there's a possibility Glazer faked his own death, which is a very Bond villain thing to do.

Definitely not the villain who engages Bond in hand-to-hand combat at the end of the movie, but I could see McNair screaming at some poor underling to fire the submarine laser right now.

You might not think she looks all that menacing or calculating, but sometimes the most Bond villain thing is appearing trustworthy and non-threatening.

Most people probably expected Jones to be higher up on this list, but if there's a role he's ideally suited for in a Bond movie, it's not the villain. It's the billionaire American at the baccarat table with James Bond who loses $200,000 and then stomps off while Bond seduces his mistress.

Perfect as the antagonist in a 1986 Bond movie starring Timothy Dalton. Otherwise, no.

Being rich in South Florida automatically gives you a major bump on the Bond villain scale, because it's assumed at least some part of your wealth is thanks to the illegal smuggling of drugs/guns/exotic animals/weight loss supplements banned by the FDA.

"We're not so different, Mr. Bond. And if you say we are, I will sue you for slander."

Would be higher on this list had he not already bungled a criminal conspiracy. Or had he aimed higher than "bilking truck drivers."

I think it's how confident he looks wearing a suit and sunglasses. Pat Bowlen could climb aboard a helicopter right now and laugh maniacally and it'd be totally natural.

She's 90 years old, but consider that a) her nickname in college was "Stoney" and b) she got a wedding gift from J. Edgar Hoover. I would advise you against crossing her unless you're a highly-trained secret agent.

Think about it. Isn't a faceless corporation, with no figurehead leader to take down per se, the most terrifying enemy Bond could face? He wouldn't even know who to go after.

A little too cuddly to be the perfect Bond villain. Could easily be Ambassador-who-doesn't-realize-he's-had-a-double-agent-working-for-him-the-whole-time, though.

Yeah, can't really see either one being the primary villain. Though this situation is plausible:

ASSISTANT SECRETARY TISCH: Mr. Bond, on your last mission you destroyed $35 million worth of government property, including a congressman's personal residence.

JAMES BOND: They shouldn't call it the House of Representatives if it doesn't have a bed.

ASSISTANT SECRETARY MARA: Your methods are unacceptable, Bond. The CIA will no longer support your endeavors on American soil.

Tom Benson is old and not in great health, but if you don't think a Louisiana billionaire can orchestrate a plot to put rum in the U.S. water supply from a hospital bed, you're very wrong. 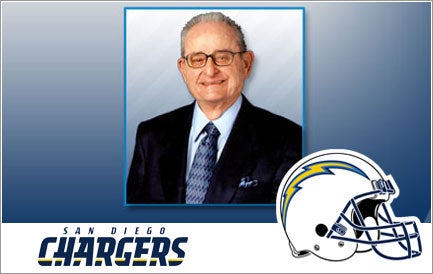 It's just so hard to see San Diego being the source of a major plot threatening world peace. If the Chargers move to Los Angeles, Spanos probably jumps into the teens or so.

Entirely too smiley to be an effective Bond villain. He'd capture 007 and then offer him a turkey sandwich.

Entirely too comfortable wearing a baseball hat with a suit and tie, which is the least menacing look possible in the business world.

JAMES BOND RETURNS IN: THE DAD WITH THE GOLDEN LEAF BLOWER

Not even the most maniacal executive in the Microsoft family.

A real Bond villain would have put Jay Cutler to death in an incredibly elaborate and painful fashion by now. Wait, that might explain Chicago's offensive line.

The Pegulas look like the nicest people! (And James Bond would be miserable in upstate New York.)