Timofey Mozgov only started playing basketball because it's what his father wanted. This is how the big man with career averages of seven points and five rebounds became the Cavaliers' missing piece.

Share All sharing options for: How a shy kid from Russia became the man the Cavaliers needed

Things were looking bleak for the Cleveland Cavaliers in early January. This, after all, was a team that had been built to compete for a championship. And yet here they were, losing again to a lottery-bound group. This time it was to the tanking Sixers, who had only won four games all year.

Something about the pieces just didn't fit. LeBron James looked slow, Kyrie Irving appeared lost and Kevin Love sometimes didn't appear at all. Reports emerged that first-year head coach David Blatt wasn't actually the one running the team. Anderson Varejao was out for the year with an Achilles injury and the Cavaliers' rotation was constantly fluctuating.

The loss to the Sixers dropped Cleveland to 19-16. The calendar said the NBA Finals were five months away, but for the Cavaliers they felt even further.

The problems started on defense, where a lack of big bodies prevented Cleveland from keeping opponents away from the rim. Guards could drive at will, big men could camp out in the paint and shooters could relax knowing their man would eventually wander off to help someone else. The Cavaliers surrendered 105.4 points per 100 possessions, the eighth-worst number in the league.

It was clear that a change was needed. Meanwhile, out West, the flailing Nuggets were looking to rebuild. And they happened to have a piece that the Cavaliers coveted.

"Bringing Timo in was something we were looking at as early as this summer," says Blatt, who, as the former coach of Russia's national team, had been familiar with Timofey Mozgov. "Because of my knowledge and experience with him, I knew he'd be a good fit for us — his pick-and-cut capability, size and ability to protect the rim."

The Cavs' rim is protected with big man

The Cavs' defense has been better since they acquired Timofey Mozgov. We examine how he's made that impact, particularly at the rim, where he's been excellent.

The Cavs' rim is protected with big man

Three days after the Sixer debacle, Cavaliers general manager David Griffin pulled the trigger on a deal. Cleveland sent two protected first-round picks to Denver in exchange for the 28-year-old Mozgov — who at the time was averaging nine points and eight rebounds and playing just under 26 minutes per game — and a second-rounder. Blatt welcomed his former player to Cleveland in a meeting in his office. "Be yourself and just do what you do," he told his center.

But not even Blatt could have foreseen what an impact this reunion would have on the rest of the club. Since his arrival, the Cavs have morphed into a solid defensive team, one that gets even better when Mozgov plays. With him on the court, Cleveland is surrendering just 101 points per 100 possessions. A major reason is that opponents are shooting just 48 percent when going up against Mozgov at the rim.

"We've changed our defense since Timo got here," Cavaliers associate head coach Tyronn Lue says. "We now scheme around always having a big man near the basket."

Lue says Cleveland had been planning on making this change anyway, but Mozgov made it a lot easier. Whereas the Cavaliers previously had their big man flashing up when guarding high pick-and-rolls, now they're dropping him into the paint.

"It's real simple," Mozgov says. "As the big guy, you're supposed to protect the rim."

The Cavaliers also adjusted their defense on side pick-and-rolls by forcing the ball handler away from the screen and into the big man. "We used to have our big guys show on those plays, or go up to the touch," Lue says. "Now the goal is to force those mid-range pull-ups."

"His weakside awareness has really surprised me," Lue adds. "He's so good at tagging cutters as they come through and reading pindowns and screen. He's got an incredible basketball IQ."

That IQ comes through on offense, too, where Mozgov has displayed a knack for rolling to the rim. It's a funny thing, the idea that a 7-footer with no jump shot or handle could help transform an offense that already had three of the game's best scorers. But the numbers paint a pretty clear picture. Before Mozgov came to Cleveland, the Cavaliers were scoring 105.5 points per 100 possessions. With Mozgov on the court, that number jumps to 111.5, the second-highest mark on the team.

"They call me a good roller, but I don't know, I just do what I do," Mozgov says. "I don't do anything special. You set a good screen, you'll be open." 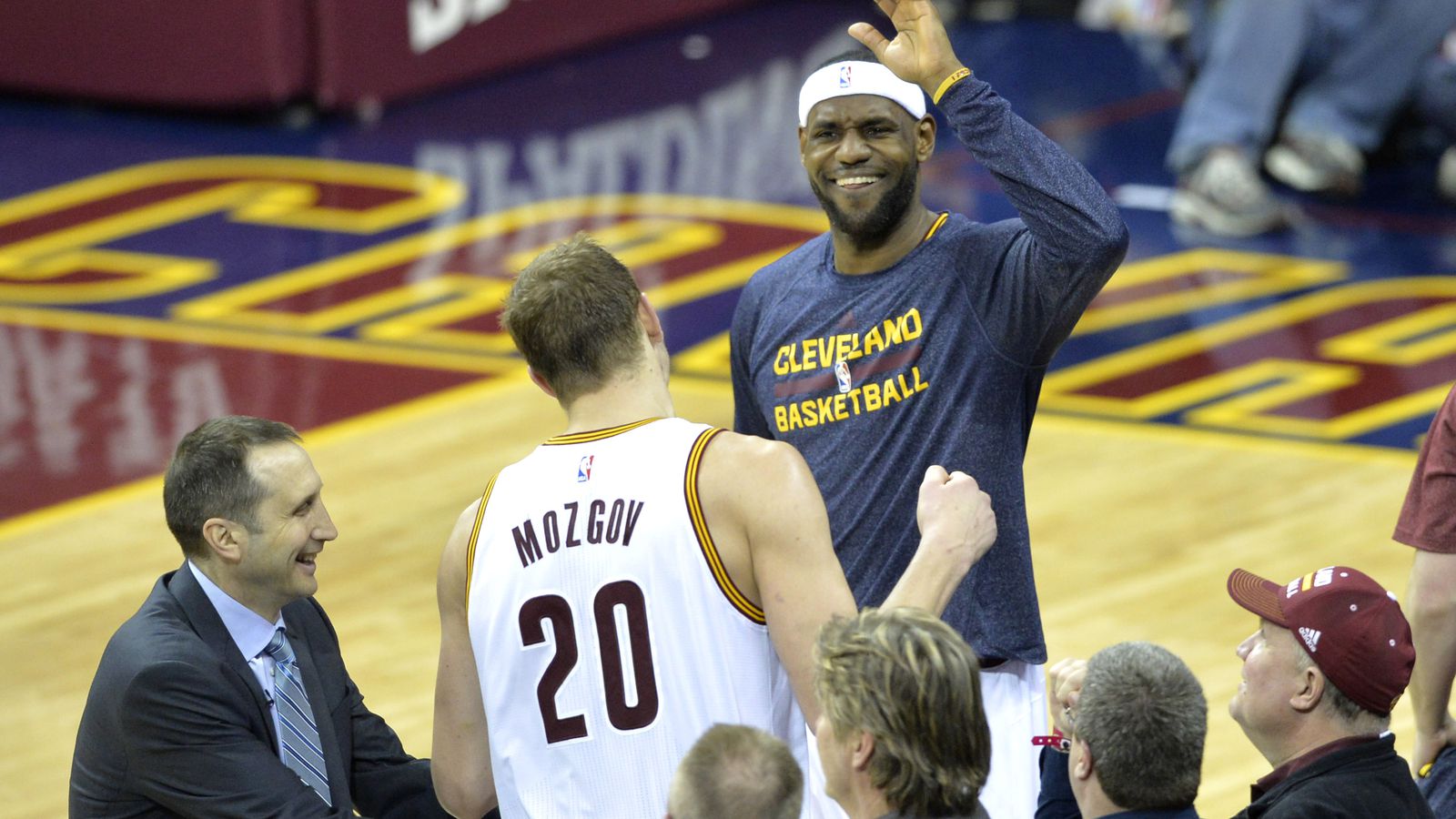 Timofey Mozgov didn't choose basketball. As the saying goes, it chose him. Or, rather, a woman named Kira Trzheskal did.

Mozgov was sitting in school in St. Petersburg, Russia's second-biggest city, when Trzheskal, a renowned youth coach in Russia, stepped into the 9-year-old's class. She was looking for tall people. Mozgov, the son of a 6'8 father who played professional handball and a mother who ran track, raised his hand.

That was the first time Timofey Mozgov ever stepped foot on a basketball court. That he was the only one there who had never played before didn't matter. He was hooked immediately.

A few years later, the Mozgov family -- that included his parents and his three older brothers -- moved south to Enem, a small town with a population around 18,000. Unfortunately for Timofey, it wasn't exactly a basketball hotbed. "There weren't many people who played there," he says. "The competition wasn't as great."

He got creative. The Mozgovs were a working-class family. Timofey's dad, after an injury ended his handball career, worked as a driver. His mother stayed home to raise her massive kids. They didn't have a lot of money. Their basketball court was a makeshift one.

"It wasn't even really a court," Mozgov says. "When you drove and came down, you had to be really careful [of the curb]. You could get injured every time."

Mozgov studied Kevin Garnett on TV and played outside every day. "If it snowed, we would just do shooting games without dribbling," he says.

As he got older, Mozgov also got taller. He started dunking by age 15 after a growth spurt. Later on, he enrolled in a sports academy back in St. Petersburg and then bounced around several different Russian teams. But it wasn't until he made it over to the United States to work with a man named Fess Irvin that the NBA became a dream.

"I also knew that down the line (trading Mozgov) was going to be viewed as a mistake." -Donnie Walsh

Irvin is a former college basketball player turned trainer. He spends most of his time in Dallas, where he worked with Mozgov. Under Irvin's watchful eye, Mozgov was put through six hours of workouts per day. Footwork was emphasized. Film was studied. Yoga was mandatory. Irvin's camp also helped Mozgov adjust to America off the court.

Eventually, Mozgov caught the eye of a Knicks scout, Kevin Wilson, who passed the name on to Glen Grunwald, a team executive. Grunwald went to Russia to check out the neophyte. He watched him once in person and once in his Moscow hotel on TV. "Here's a young big man with good athleticism and big hands who plays hard and seems to have a good head on his shoulders," Grunwald told his boss, Donnie Walsh. The Knicks' then-president of basketball operations agreed and Mozgov was signed to a three-year, $9.7 million deal in 2010.

"He had so much size," Walsh says today. "And you could tell that he was a very willing player, that he'd do whatever it is you asked of him from a development standpoint."

In Walsh's eyes, he had his center of the future. Including him in a trade a few months later — which he did, in order to get Carmelo Anthony — was never something he wanted to do.

"I really tried to avoid that," Walsh says. "But Denver insisted on him. I did it because I thought it was worth it to get a guy like Melo, but I also knew that down the line it was going to be viewed as a mistake." 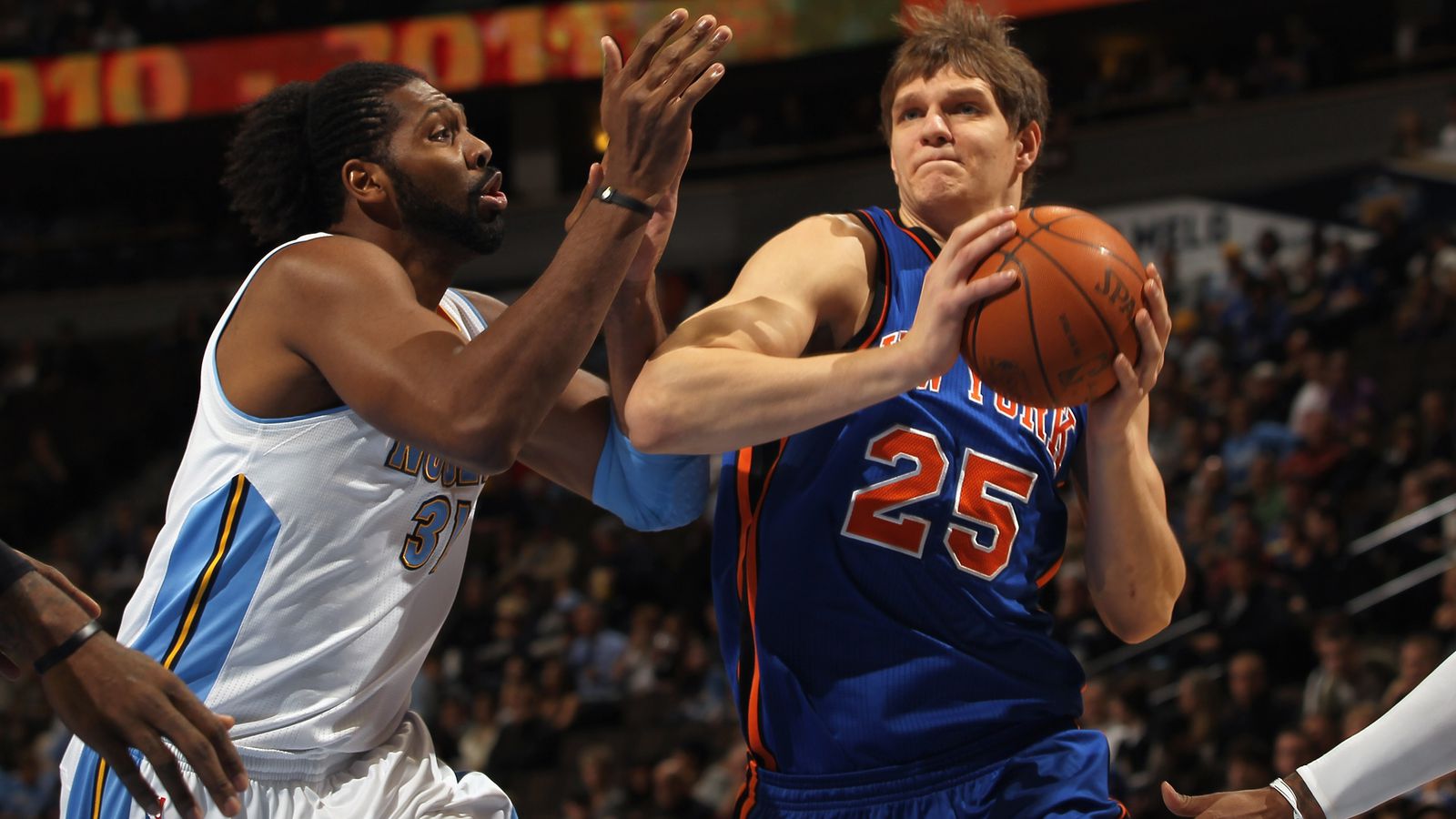 Mozgov with the Knicks in 2010, Photo credit: Doug Pensinger/Getty Images

Timofey Mozgov didn't save the Cavaliers' season. There are simply too many variables, including the acquisitions of Iman Shumpert and J.R. Smith, who bolstered the team's depth on the wing. There was also the two-week Miami vacation LeBron James took in early January, which seemingly turned him back into the spry and explosive player who has won the league's Most Valuable Player award four times.

But what Timofey Mozgov did do for the Cavaliers' season was change its dynamic, both on and off the court. Cleveland is 33-12 since the trade, and not just because Mozgov gave the team a tall man who could stand in the paint. "He's got a great personality," Lue says. "He's funny as hell."

Sometimes Mozgov makes his teammates laugh by blurting out rap lines while sitting in the locker room. Other times it will be by cursing in Russian. Most recently it was his appearance in a couple of commercials for a local pub called Brew Garden.

In one of the spots, Mozgov dons a jersey backward and does an Ivan Drago impression while his eyes constantly dart off camera. In the other, he's bantering with a waitress. The production value of both spots makes B-level movies look like Spielberg.

"They're the funniest commercials I've ever seen," says Lue, who added that he planned on showing them to the team during an upcoming film session. Even the most serious of quests can use a bit of levity and Lue likes that Mozgov brings that to the team.

At first, Mozgov was embarrassed. He didn't enjoy feeling like the butt of the jokes. But after some time, and some pushing from agent Andy Miller, he slowly began to embrace the spotlight. "It was his first time doing an endorsement deal," Miller says. "I think he was kind of just shy about it."

Mozgov has had to make a lot of adjustments since coming to Cleveland. He spent his first few months in the city living out of half-unpacked suitcases in a Ritz Carlton hotel room, before his wife and son came over from Denver. "The place was a mess," Mozgov says. "There was stuff everywhere."

To help with the transition, Mozgov latched on to Vitaly Potapenko, a Ukrainian former NBA player, Russian speaker and now Cavaliers assistant coach. The two of them often go out to dinner together, especially on the road.

During practices and before games, Potapenko works with Mozgov on his post moves. The two work out so frequently, and so intensely, that Lue says the Cavaliers had to tell him to slow down so as to not burn himself out. (Mozgov is extremely competitive. Irvin, the trainer, tells a story about the time he beat Mozgov one-one-one, only to have his pupil respond by angrily launching the ball across the court.)

Of course, Mozgov didn't get here by slowing down, which is why before games you can still see him banging with Potapenko down on the blocks. It's hard for someone who was never a star to stand out on a team full of them, but the Russian who could barely make a name for himself in his native country is the man in the middle for the favorites in the East.

Not bad for the kid from St. Petersburg who raised his hand.