Tennessee played scared, and that's why it lost to Oklahoma

Fourth-and-goal from the 1 with 55 minutes left? Go for it, Butch Jones. Every time.

Share All sharing options for: Tennessee played scared, and that's why it lost to Oklahoma

Teams went for it on fourth-and-goal from the 1 on 122 occasions in the 2014 season. They scored a touchdown 66.4 percent of the time, 81 times in all. That's an expected point value of about 4.6. And if you fail, your opponent is probably getting the ball on its own goal line.

Meanwhile, you can only score three points on a field goal.

Just thought I'd point that out, Butch Jones.

The opening minutes of Tennessee-Oklahoma almost couldn't have possibly gone more in the Volunteers' favor. After a couple of nice gains, Oklahoma turned the ball over when a Baker Mayfield pass went through the hands of Dede Westbrook and into those of Todd Kelly Jr. near midfield. UT methodically worked the ball to the goal line and almost scored on a second-and-goal pass. On third-and-goal from the 1, Alvin Kamara was stuffed. On fourth-and-goal, with 240-pound back Jalen Hurd on the sideline, Tennessee kicked a 19-yard field goal.

It kept going well for a while, to the point where this egregiously ridiculous decision almost went unpunished. Oklahoma punted twice, and Tennessee scored on a nine-yard pass from Josh Dobbs to Josh Malone. Two more OU punts later, Dobbs scored from four yards out. 17-0. Conservatism wins!

And then conservatism lost. Tennessee ran the ball 22 times in 29 first-down snaps, and the run quickly stopped working. Hurd's first 14 carries gained 97 yards; his last seven in regulation gained two. The "run, run, third-and-long pass" approach to play calling put Dobbs in lots of awkward situations, and after getting grounded by Tennessee's defense for three quarters, OU's newfangled version of the air raid took off.

Down 17-3 heading into Q4, OU scored on a 14-play touchdown drive, and after another UT three-and-out, the Sooners tied the game with a 13-play touchdown drive. With 40 seconds and two timeouts remaining, Tennessee decided to kneel on the ball instead of salvaging the game in regulation.

Two overtime possessions later, the Sooners left the field at Neyland Stadium, middle fingers in the air, as 31-24 victors.

The team that tried to win the game, won the game. The team that decided to kick a 19-yard field goal five minutes in, then sit on that lead for the next 55 minutes (and then give away the final 40 seconds of regulation once this approach backfired), lost. This was Butch Jones' best opportunity at a statement win, and the pure talent and physicality of his two-deep earned him a 17-point lead despite himself. And then clammy hands gave it all away.

The 19-yard field goal ended up filled with symbolism. Yes, there is a risk in going for it in that situation. You might get stuffed, as Oregon did in the second quarter against Michigan State about an hour after Tennessee's decision. You might turn the ball over.

You also might miss the chip shot field goal. You might snap the ball over the holder's head. There is risk inherent in everything, so your best bet is to play the odds. Odds say you should almost always go for it on fourth-and-1 ... especially when you're one yard (or less) from pay dirt.

But I'm probably not saying anything Tennessee fans haven't already said themselves since Saturday night.

In Notre Dame's 34-27 win over Virginia, Will Fuller's game-winning touchdown, on a pass from backup quarterback DeShone Kizer, spanned 39 yards.

It also resulted in two of the most amazing fan reaction shots you'll ever see. First, this screenshot: 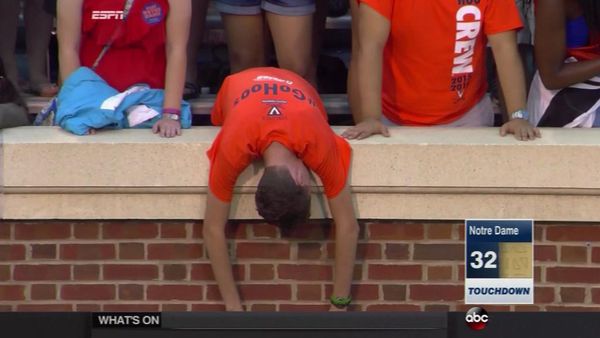 This is glorious. Had not seen this yet. pic.twitter.com/CS3ORYOZqV

It is difficult to ever find a stranger box score than that of Texas' 42-28 win over Rice. The reconfigured Texas offense looked solid -- new starting quarterback Jerrod Heard completed bombs to John Burt and Armanti Foreman and rushed nine times for 99 yards (not including one sack). The Longhorns averaged 7.3 yards per play, their first sojourn over seven yards per play since the first game of 2013 (and that was against New Mexico State, if that counts).

The odd part: the 'Horns took only 38 snaps. Rice took 96. Texas scored on drives of nine, zero (punt return), two, one, zero (fumble return), and five plays. Rice scored on drives of 17, 16, 18, and eight. The Owls allowed two return scores and turned the ball over four times in Texas territory.

Texas drastically out gained Rice on a per-play basis (7.3 to 4.8) and finished with a plus-4 turnover margin. That'll win you the game almost all of the time. But Rice's persistence meant that the Longhorns needed every bit of those advantages to hold the Owls off.

Sometimes symbolism doesn't make itself clear until later on down the road, and we technically don't know how big a deal it is that Kentucky beat South Carolina, 26-22, in Columbia on Saturday. It might be a spark toward a wonderful season, and it might just be a win over a bad team. We don't know yet.

We do, however, know that it ended a 22-game road losing streak for the Wildcats, a run that spanned five years and one week. In Joker Phillips' first game as UK's head coach, his charges beat Charlie Strong's first Louisville team, 23-16. Since then, nothing.

Kentucky improved from 2-10 to 5-7 in Mark Stoops' second season in Lexington, but as with Butch Jones in Knoxville, there are still some symbolic boxes to check before his tenure can be called a success. Simply winning on another team's home field was the first of many. But it's checked now. 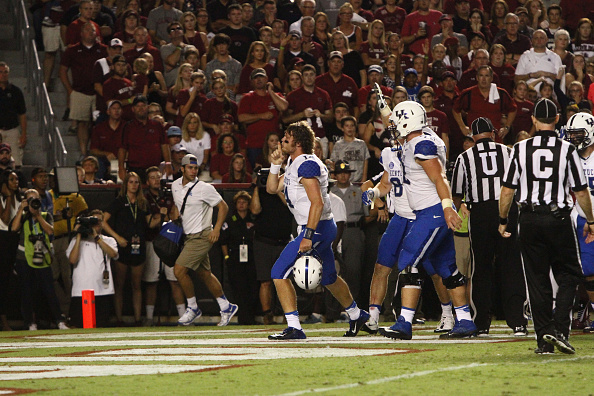 Of course, Eastern Michigan sees your 22 games and raises you 27 years. Granted, the Eagles' 48-29 win over listless Wyoming in Laramie snapped what was only a 14-game road losing streak. But it was also their first non-conference road win since 1988. (1988 was also the last time they had rushed for 400 yards in a game; they rushed for 430 on Saturday.)

1988! Seniors on EMU's team were likely born around 1992 or 1993. Their entire time on Earth had not included a non-conference road win for the team from Ypsilanti.

The best part: that 1988 win came against a 1-AA team. EMU, then the Hurons, took down Youngstown State, 17-12. To find a non-conference road win against a top-subdivision opponent, it appears you have to go back to 1975 (EMU 27, ULM 24), when current EMU head coach Chris Creighton was six years old.

No team moved up further in this week's S&P+ rankings than good old interim coach Bill Cubit's Illinois Fighting Illini, which jumped from 74th to 59th. Facing Kent State and Western Illinois is just about the easiest start conceivable, but beating those two teams by a combined 96-3 and holding them to 2.9 yards per play is awfully impressive regardless. (Averaging just 5.3 yards per play against these teams is less impressive, but we'll accentuate the positives.) Next up: a trip to North Carolina. Hold the HEELS to 2.9 yards per play, and people will notice.

First things first: it must be noted that Vanderbilt's defense might be awesome. A week after holding Western Kentucky's potent attack to 14 points, the Commodores held Georgia's offense to just 17. Two return touchdowns (a 77-yard punt return by Isaiah McKenzie and an 88-yard interception return by Dominick Sanders) made the 31-14 final scoring margin more drastic than it should have been.

That said, I've been looking for answers regarding Georgia's quarterback situation, and this wasn't the most encouraging answer in the world.

My 2015 Georgia preview was a pretty funny one to write; the sentiment was basically "Georgia's loaded! They're easily the SEC East favorites! They just have two minor little questions ... at quarterback and offensive coordinator. You know, those tiny, unimportant positions." 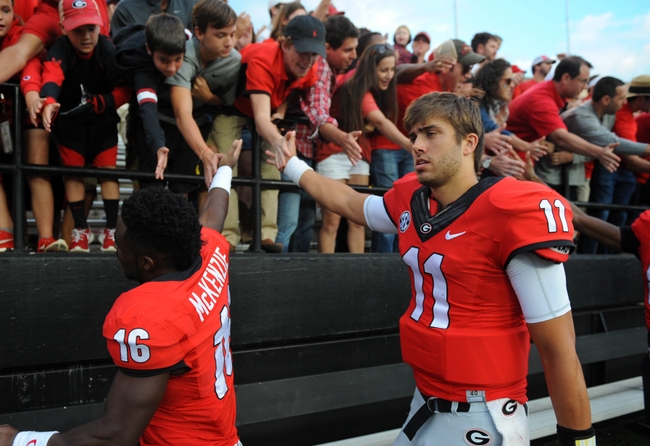 That Virginia transfer Greyson Lambert won the starting quarterback job didn't fill me with confidence since he was a bit error-prone in Charlottesville. He was fine against ULM, but this was his first real test. He went 11-for-21 for 116 yards and a sack. Average yards per attempt: a meager 5.0.

Granted, Nick Chubb and Sony Michel combined to rush 31 times for 245 yards and catch four passes for 43 yards. When you've got that running game in your back pocket, you don't need much from the passing game. But you probably need better than 5 yards per attempt. This wasn't a failed test, but it wasn't really a pass, either.

The MAC has had better Saturdays, but it had been a while. Toledo's 16-12 win over Arkansas, combined with Bowling Green's 48-27 pasting of Maryland and Ohio's 21-10 victory over Marshall (revenge for last year's 44-14 thumping) gave the home of MACtion a trio of marquee wins. Meanwhile, EMU won by 19 at Wyoming, Buffalo trailed Penn State by only six heading into the fourth quarter (final: PSU 27, UB 14), Akron trailed Pitt by three with about 20 minutes remaining, and NIU, Kent State, and CMU all put away FCS competition like you are supposed to. Really, only Ball State (down 49-3 at halftime to Texas A&M) and WMU (walloped 43-17 by Georgia Southern) disappointed.

This wasn't the MAC's best ever non-conference weekend (it certainly doesn't top one from 2003), but after a couple of lackluster seasons in the Midwest, this was a nice statement.

Taylor Lamb's QBR in Appalachian State's 41-10 loss to Clemson. We might not completely know how QBR is calculated, but we know that 1.7 is really, really bad. Lamb went 9-for-28 for 95 yards, a touchdown, three interceptions, and a sack. Clemson logged 10 tackles for loss and seven passes defensed; we don't know everything we need to know about the Tigers yet, but it appears this rebuilt defense can still attack you.

Of Arkansas' 10 possessions against Toledo in Little Rock on Saturday, eight ended on the Rockets' side of the 50. Counting scoring opportunities as first downs inside the opponent's 40, the Hogs had six of them. Going by national averages, this should have resulted in about 28 points.

Arkansas lost, 16-12. And two of those 12 points came via an intentional late safety.

The Razorbacks, with their meaty line and big running backs, averaged just 1.67 points per scoring opportunity. They failed in just about every way possible: they missed a field goal, they threw an interception, they turned the ball over on downs.

On third-and-goal from the 3 early in the fourth quarter, UT's Rolan Milligan and DeJuan Rogers stuffed Alex Collins for a five-yard loss, forcing a field goal and cutting Toledo's lead to only 16-10. Thanks to that failure, the Hogs had to go for it on fourth-and-goal from the 7 with five minutes left and failed. And given one final opportunity to save themselves, Arkansas advanced to the Toledo 16 with under 10 seconds remaining. Quarterback Brandon Allen missed an open Hunter Henry in the end zone, then saw a desperation pass to Keon Hatcher fall to the turf as time expired.

Mississippi State can relate to Arkansas' pain. After a first half full of offensive ineptitude against LSU, the Bulldogs settled themselves and created six scoring opportunities in their final seven possessions. That's more than enough opportunities to erase a 14-point deficit.

Those six scoring opportunities: field goal, field goal, touchdown, punt, touchdown, missed field goal. Out of 42 available points (if you were to score touchdowns on every one of these tries), MSU claimed 19 of them. And the Bulldogs still had a chance to win the game on the final drive, but a baffling delay of game penalty and odd play calling turned a 47-yard field goal attempt into a 52-yarder that Devon Bell missed wide.