Inside J.J. Redick’s obsessive quest to make every shot he takes

J.J. Redick's "obsessive" work ethic has propelled him to new heights at age 31, when most shooters begin to decline. Here's how his commitment to a strict routine has allowed him to keep improving.

Share All sharing options for: Inside J.J. Redick’s obsessive quest to make every shot he takes

J.J. Redick doesn’t wait. As DeAndre Jordan swats the opening tip to the Clippers, Redick dashes across the baseline as if gold awaits on the other side. Within seconds, he bolts past his defender to knock down a pull-up jump-shot against the Cavaliers on March 13.

Redick soon nets nine of L.A’s first 14 points, as he squeezes into the lane for a floater, drills another shot off the dribble and then pops a three in the corner.

Ten years into his NBA career, Redick has evolved into a more dynamic shooter, matching a career-best 16.4 points, 1.9 rebounds and 1.4 assists a night. He has a blistering 47.5 percent from three and 47.9 percent from the field as the glue of the playoff-bound Clippers.

That's because with every shot he releases and every drill he completes, Redick increases expectations for himself. He must exceed his output each time he steps on the floor.

"I think one of my strengths is just being adaptable," Redick said before a Saturday morning practice at the team’s Playa Vista facility in late March. "I’ve had a lot of different roles in this league. Even within the same organization, year to year, your role can change. I think my mind set is always starting with self responsibility of working to get better and improve myself, but also figuring out each year: how do I help whatever team I’m on win games?"

Every Sunday afternoon in the offseason is the same for J.J. Redick. The third-year Clipper shuttles across the perimeter at full speed, mandating himself to make 140 spot-up two-pointers and 140 spot-up three-pointers. Specifically, he must make 20 shots at seven different spots on the court, one after the other. Next, imagining a hand in his face, he must make 42 pull-up jumpers off the dribble: 21 to the right, 21 to the left. Draining 20 free throws, the drill stretches to 342 total makes.

Redick, whose offseason routine includes working out six days a week and not traveling after he starts his basketball workouts in mid-July, can be a perfectionist.

"He’s a freak of nature. I can’t think of one person that’s in better shape than J.J."-Ryan Anderson

While on the Magic, he’d come to practice early to drill all types of shots: floaters, pull-ups, step-backs, moving into each shot as if he were in a real game and he was running wide in transition.

"I remember he would kick the ball across the entire court," Anderson said. "It would hit the other wall and everybody would look over, and you’d be like, ‘Oh, it’s just J.J. He might've missed one out of like 30.’"

Redick uses every opportunity he can to improve himself, as if his spot was never guaranteed in the NBA. After the glory of the 30-point games, the records and the All-American honors at Duke faded, Redick found himself back at the drawing board. Critics peppered him with questions. Could he handle the physicality of the pros? Could he defend? Could he get his shot off against bigger, stronger players? (Redick used to joke with his Orlando teammates that he had Tyrannosaurus Rex arms, as his wingspan is shorter than his height).

Playing limited minutes as a rookie in 2006-07 and over the next few seasons, Redick devoted himself to improving his weaknesses.

"I think coming to the NBA and being who he was in college, he had to humble himself a little bit and he did," said Nuggets point guard Jameer Nelson, a former Magic teammate. "It’s kind of a culture shock. And everybody who’s going through it, you could either go two ways: You could use it for motivation or you could let it crack you. The motivation route is definitely where he went."

In an attempt to develop both explosiveness and endurance, Redick would arrive at the local Orlando track at Jones High School at six in the morning to complete his own sprints, an hour before his teammates arrived. The sticky, humid sun blazed across his back, but Redick still beat his peers once they joined.

On the court, the team completed a grueling three-minute, full-court sprinting drill that rewards the most baseline touches. Seeking the crown, Redick deduced the exact number of steps he’d need to reach each baseline. He owns the record with 29 touches, according to former Magic head strength and conditioning coach Joe Rogowski, now director of sports medicine for the NBA Player Association. 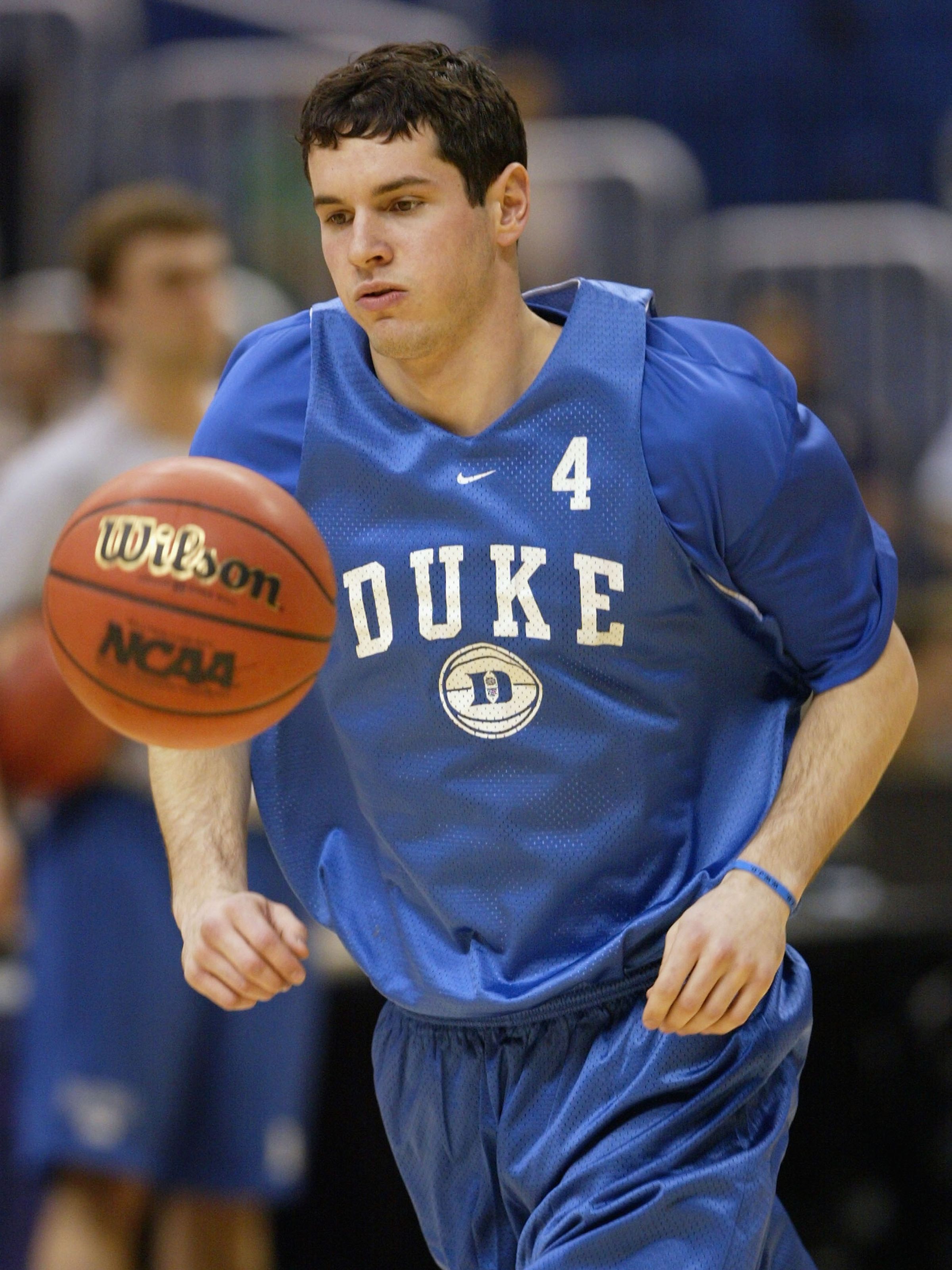 Redick cultivated sky-high standards for himself much earlier, as he couldn't tolerate not measuring up. He was a hard worker, but at times struggled with nutrition and off-court issues as a young Duke player. Duke’s 2004 national semifinals loss to Connecticut pierced him. Trailing by one with several seconds remaining, Redick drove into the key and lost control of the ball.

"He felt like he personally had let the team down by that play. It really put him in a bad place mentally and emotionally," said Chris Collins, former Duke associate head coach, now head coach at Northwestern.

The coaching staff wanted more of Redick, who had averaged 15 points a night.

"I remember telling him: ‘It’s sad because we don’t fully know how good that you could become because you’re not giving everything of yourself into this,’" Collins said.

Redick committed to a strict summer plan that monitored each hour of the day on a spreadsheet: when he worked out, when he attended summer school, when he ate and when he slept. Practically living in the gym, he shed 20 pounds.

"He got in the best shape of his life," Collins said. "He took much better care of himself off the court. He worked on his game. He came out as a junior and just exploded on the national scene."

That mentality motivated Redick in Orlando, as he grew stronger, quicker and more dynamic with each season. He stole records in team weight-room workouts. He became an X factor in the Magic’s 2009 NBA Finals and 2010 Eastern Conference Finals appearances. By his fifth season in 2010-11, he averaged double-digit points. By his last season in 2012-13, he posted 15.1 points a game on 45 percent from the field and 39 percent from three-point range.

"I think that’s what separates good and great players from the rest of the pack," said Dahntay Jones, former Duke and Clippers teammate, now on the D-League’s Grand Rapids Drive. "There’s a lot of guys who come to the NBA and don’t get a shot early, and they sometimes give up or don’t work hard. But J.J. took on that challenge and kept working and never gave up."

Redick wasn’t satisfied. Shooters have short-term memory, not just for the shots that clank, but for the ones they drain. There is always another shot to release, another move to perfect. Redick is no different. "Complacency is not a word in J.J. Redick’s vocabulary," Rogowski said.

After being traded to the Bucks in 2013 and then to the Clippers, Redick continued to improve himself in order to improve his team. Focusing on quality over quantity, he pushed himself in his own shooting drills by sprinting into each shot. He worked on coming off screens, practicing as if defenders were flying at him and limiting himself to a certain number of dribbles.

"You hear a lot of people talk about guys making 500 shots a day, you make a certain amount a day," Redick said. "I don’t really ever worry about that. I think, for me, it’s more about getting reps up at game speed with shots that I take in games. I think that’s probably more important for me."

Playing alongside Chris Paul, Blake Griffin and DeAndre Jordan in a system that thrives on off-ball screens and three-pointers, Redick has finally found his niche. The former reserve has transformed himself into a starter on a championship contender. The Clippers rely on him as a spark, especially in the first quarter. His role increased this season in Griffin’s absence, as he is averaging career-highs in points (16.5) and three-point percentage (47.1 percent). He leads the NBA in the latter category, besting even Stephen Curry.

"I don’t think he gets the credit that he deserves for that team," said Kings floor general Darren Collison, a former Clippers teammate. "He’s hit some big shots in the playoffs. His confidence has never wavered ... every single game, he’s always trying to take the big shots."

As a result of countless hours honing a more versatile skill set, Redick is moving without the ball and attacking the basket more. He’s catching and shooting 50 percent of the time, pulling up off the dribble 36 percent of the time and attempting shots within 10 feet 13 percent of the time. That's Redick's most even shot distribution since he arrived to the Clippers in 2013-14. Lulling his defender to sleep, he attacks a pick-and-roll the way a magician introduces a trick: slowly, at first, then devastatingly quick in its final surprise.

"Off reputation, he’s always been known as just a jump-shooter," Clippers veteran Paul Pierce said. "He’s definitely surprised me with the way he gets to the bucket ... the way he finishes with the right hand and the left hand."

Redick’s hours in the weight room have also paid dividends on defense, as he collected one or more steals 28 times this season. The Clippers are two and a half points better per 100 possessions when Redick is on the court, per NBA.com's stats page.

"He’s always been a solid defender," Clippers coach Doc Rivers said. "He’ll never be a lockdown individual defender, but what he is is a terrific team defender, and you need those on your team."

Redick may have added more to his arsenal over the last decade, but he still has the same drive. When the clock is dwindling, his hands still crave the ball. With the score knotted against the Blazers with a second remaining in regulation on March 24, Redick curled around a screen set by Jordan. Embedded into muscle memory, Redick aligned his body with the basket, balanced from his toes to the tips of his fingers, and caught the inbounds pass from Paul. Letting his shot fly, he leaned back, slightly, and raised one foot, waiting, waiting, waiting for the shot to drop.

There wasn’t any doubt, as the ball sank through the net to give the Clippers the 96-94 buzzer-beater victory. Redick chest-bumped Paul and embraced Austin Rivers.

He expected himself to make the shot. He’d been in this situation before: by himself, in the gym, on Sundays in the summer.

Onto the next spot.

The evolution of the three-pointer