If you’re wondering what happened to the Georgia Dome, here’s what replaced it

Yep, the Georgia Dome is already done, with a spaceship taking its place.

Share All sharing options for: If you’re wondering what happened to the Georgia Dome, here’s what replaced it

The Georgia Dome was the home of the Atlanta Falcons, the SEC Championship Game, and countless other sporting events in downtown Atlanta for a relatively brief 24 years. But as we enter the 2017 football season, the Georgia Dome is thing of the past, replaced by the brand new, completely absurd Mercedes-Benz Stadium right next door. 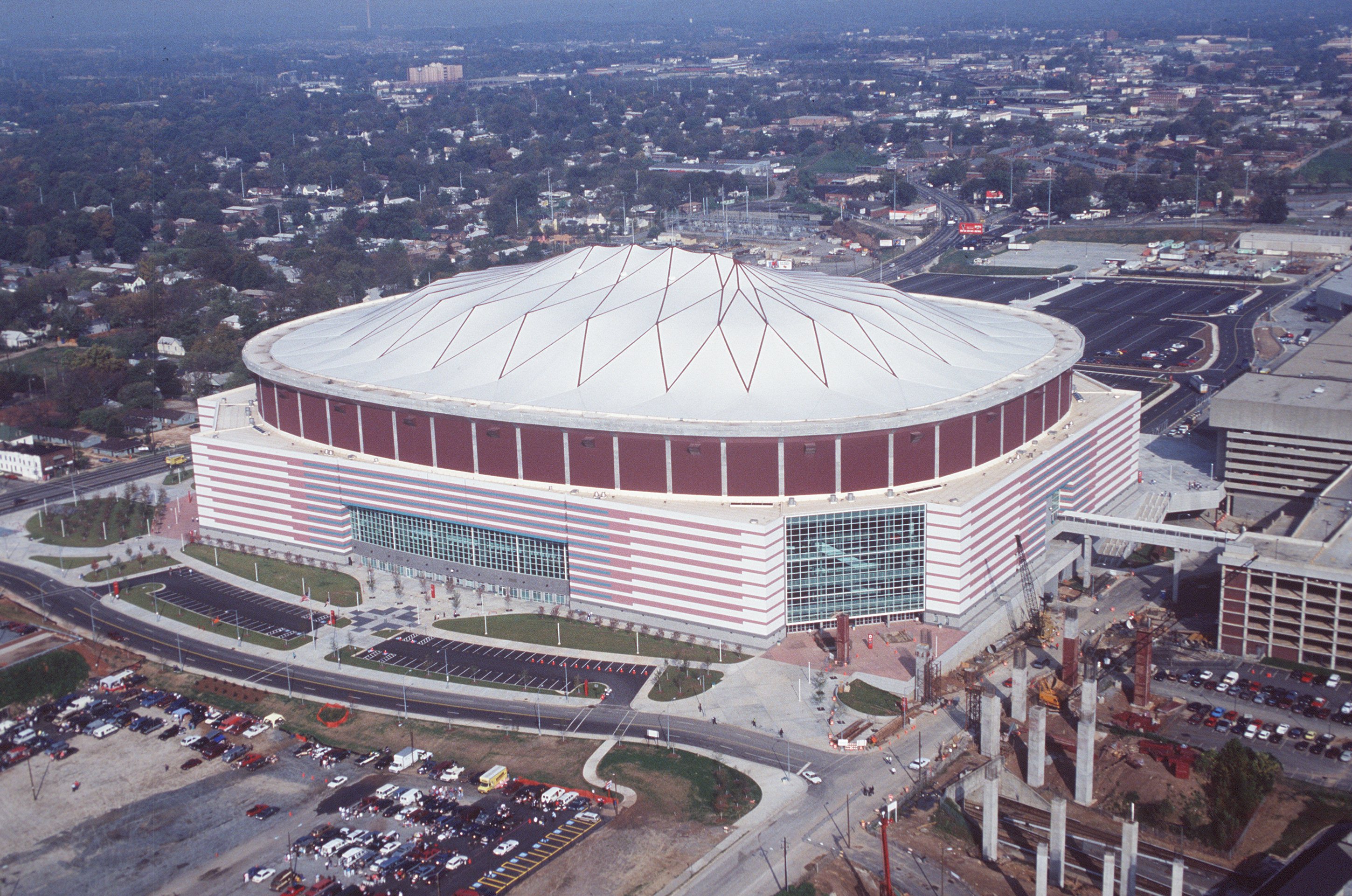 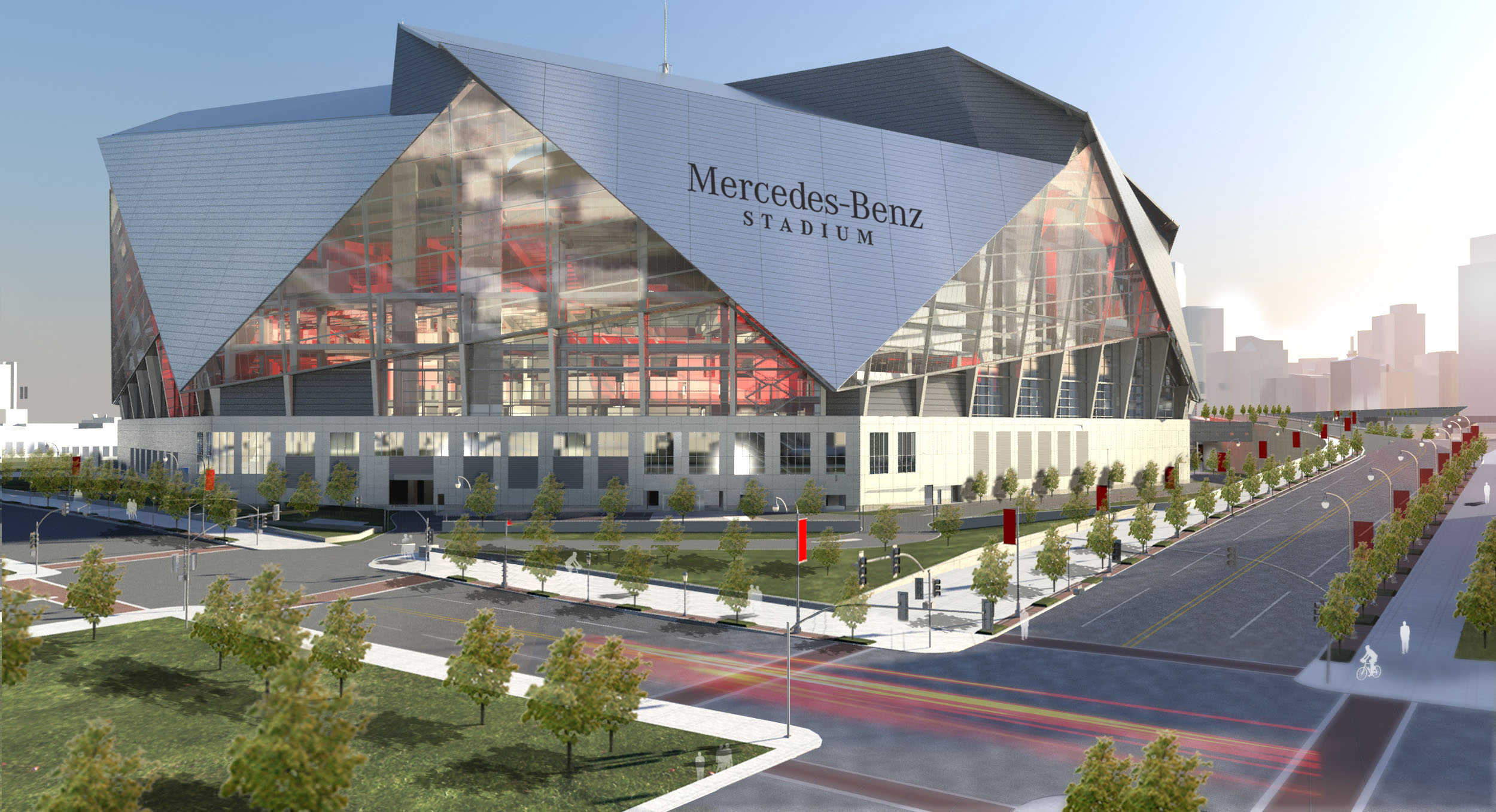 The Dome wasn’t very old, but Falcons owner Arthur Blank wanted a state-of-the-art facility for his NFL and MLS teams and was willing to pitch in a huge amount of money to make it happen. The new building cost about $1.5 billion, with Blank’s group paying for the bulk of it. The city of Atlanta authorized a $200 million contribution of its own.

The dome is scheduled to be imploded on Nov. 25 at 7:30 a.m., while Mercedez-Benz Stadium’s debut was a Falcons preseason game on Aug. 26, followed by Alabama-Florida State on Sept. 2 and Georgia Tech-Tennessee on Labor Day.

The new stadium’s debut year also includes the latter end of the United’s home schedule (the MLS team made a temporary home of GT’s Bobby Dodd Stadium) and the SEC Championship, Peach Bowl, and College Football Playoff National Championship in January, with the 2018 season’s Super Bowl and 2020’s Final Four to follow.

So, what’s happening to the dome after its implosion?

Good question! The new stadium is actually making great use of the space that once held the dome. The land will be turned into “The Home Depot Backyard,” a 13-acre greenspace that’ll be used for game day parking, arts and culture events, entertainment, and community events starting in 2018.

The Home Depot Backyard plans to offer unique game and match day experiences for Atlanta Falcons and Atlanta United fans, as well as year-round opportunities for the community to enjoy the space through arts, culture, and entertainment events, military veteran appreciation activities. and everyday access to a beautiful greenspace with play areas and fun activities.

In March, Spencer Hall gave the Georgia Dome a eulogy:

The Atlanta Falcons played mostly forgettable football here, unless you take out the Vick years, which you might want to given how they ended. If there were some way to keep the part where all the mostly African-American fans in the upper deck went bonkers the minute they started playing “Bring ’Em Out” for those teams, you should do that. That may be the most excited single concentration of minutes you could salvage from the team’s history at the Georgia Dome: Before the team played, but after they remembered they were going to watch the fastest player in the NFL touch the ball on every play. This is a happy memory. There aren’t a lot of those there.

It hosted a lot of college football, including the annual SEC Championship game. Tim Tebow cried on the sideline there after Alabama clipped Florida’s undefeated streak short in 2009; Les Miles in 2007 used his backup quarterback to win an SEC title there, and then a national title LSU somehow got with two losses later in New Orleans. Before that game he hustled every reporter in reach to a press conference where he denied Kirk Herbstreit’s report that he was going to take the Michigan job, and then with his chest at full inflation demanded that the room “have a great day.” I was there for that and, yes, it was just as confusing in person as it was on television.

The last and final live event that the Georgia Dome hosted was the Monster Jam, which gave the building the farewell it deserved.

It felt limitless in the sense of being infinitely powerful with no range or end to the noise, so loud and yet so obviously just getting started on the way to a theoretical full volume. What do you think a tornado at pace is? It’s actually just clearing its throat and warming up, volume-wise. It’s whispering, holding back. You just hear it as a roar.

There wasn’t even a shudder from impact. There was just the sensation that the entire building was next to an immense floor buffer, spinning and vibrating at thousands of RPM. When that vibration turned into waves the roof flapped like a subwoofer, the air vents started spitting out pieces of insulating foam, and for one second I weighed the options of dying standing up and being crushed by the falling roof and lighting, or taking my chances ducking under a table, only to be crushed by all that plus one flimsy plywood table. The lights swayed 10 to 15 feet in either direction. The waves got stronger, and the entire overturned bathtub of the stadium was now being thumped by a very pissed off janitor pushing that giant floor buffer into the side of the Georgia Dome.

The Georgia Dome did its job for a long (though not at all that long) time, but the new stadium will be completely different, cutting-edge, and unique.

“It was a really functional building that served its purpose very well,” Falcons CEO and president Rich McKay said in July. “We did not want to build a better Georgia Dome. That was not the object. If we would have done that, we would have renovated the Georgia Dome. We really wanted to change the game and do it for a long, long time.”

The stadium’s general manager Scott Jenkins added that the new building will be quite different than the Dome.

“Every decision we’ve made has been squarely with the fans’ perspective of ‘how do we take the fan experience to the next level?’” Jenkins told SB Nation. “The LED displays we have, whether it’s every seat is two-inches wider than the Georgia Dome, almost all the concourses connect so you can circumnavigate the building, you don’t get cut-off. You can move vertically throughout the building, we have really wide staircases, we have twice the elevators, twice the escalators compared to the Georgia Dome.”

As sports venues get torn down and rebuilt, moving on from a place that means so much to so many sometimes gets mixed reviews. But with the new state-of-the-art stadium, moving on probably won’t be all that difficult.