What every poor kid from Detroit could learn from a trip to Dulwich Hamlet.

Share All sharing options for: How a small English soccer club helped me see beyond my poverty

I was introduced to Dulwich Hamlet in November 2015, when I went to London for the first time. I flew there for my friend Jude’s birthday and I was invited to the game by a colleague, Andi Thomas, who I knew beforehand from his old soccer blog, Twisted Blood.

Andi, a Hamlet supporter, suggested the game as a counterpoint to going to watch Arsenal. Arsenal’s stadium, the Emirates, seats almost 60,000 people. There were fewer than 2,000 people at Champion Hill — the Hamlet’s home ground at the time — the day we went there.

Going to the Emirates is like walking into a grand cathedral. The invisibility of being one among 60,000 inside such a gorgeous and expensive structure is both humbling and exhilarating. Going to a Hamlet game is like attending a neighborhood festival. The events of the day are almost insignificant. The magic of it is in the community around you.

The Hamlet are one of the best non-league clubs in the English soccer structure, but the pay is still too paltry for the players to make a living from the game. Most of them have jobs away from the pitch. None of them are celebrities, which closes the emotional distance between fans and the players. The players are more relatable. They’re playing for the same reasons that so many fans attend: For a sense of community, and to be part of the club’s history.

Several times, the fans applauded a player after a mistake or when one was having a particularly bad game. If the player was subbed, he was given an ovation. It was a culture shock after years of watching bigger teams, where the distance to empathy between fans and players is much greater, and fans take it as an obligation to boo struggling players.

I don’t remember if the Hamlet won that game, it didn’t really matter to me. What stuck with me was how kind everyone was to the players and to an outsider who they readily accepted into their fold. What I enjoyed was being there with Andi, talking to fans, making jokes at the opposition goalkeeper within earshot, and drinking can after can of inexpensive beer. I remember being very happy there.

After leaving the game, we walked to a pub in East Dulwich village. On the side of the building next to the pub was a huge mural titled “Dulwich Fight Club” of two men facing each other, knees bent, arms raised, ready to fight. 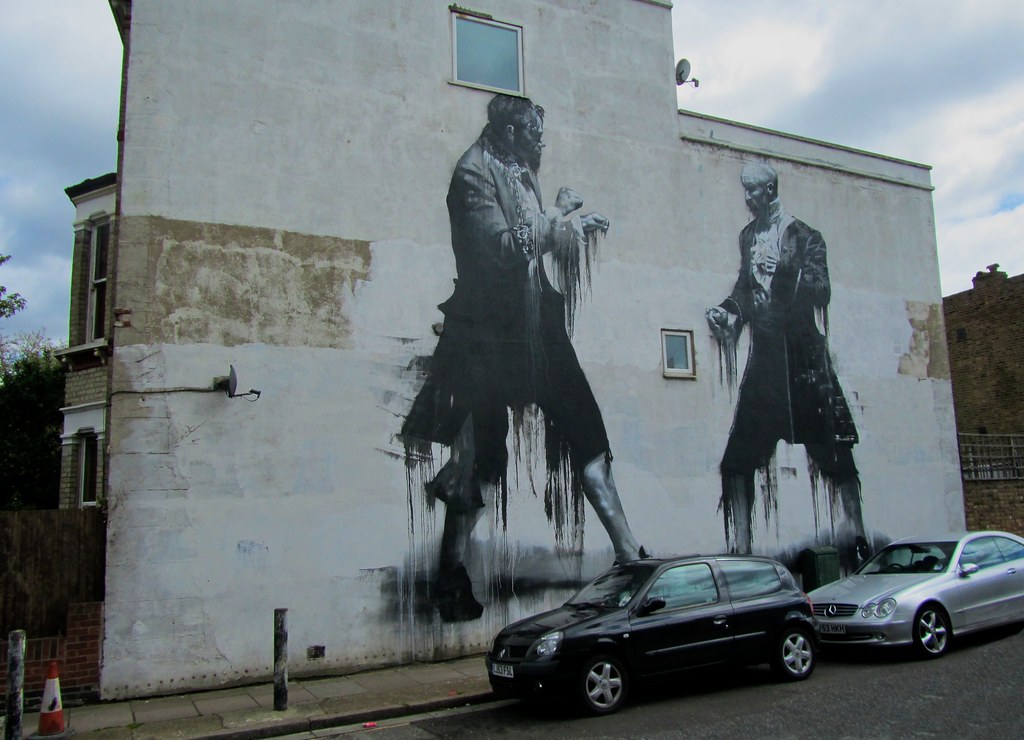 Irish street artist Conor Harrington painted it as part of Baroque the Streets: The Dulwich Street Art Festival. I had been a fan of Harrington’s for years, and while it was my first time seeing that particular painting, it was easy to recognize his work. Masculine violence was a big theme for him, and his characters were usually dressed in Georgian or Colonial attire, with their bodies obscured by shadows. Most of the time they were engaged in combat, either fighting with fists or with rapiers. What I liked so much about “Dulwich Fight Club” was the men were squaring off, but not fighting. The tension was in the future. The painting captured the brief moment before a fight when there’s still a chance for violence to be avoided.

The painting reminded me of my old high school friend, Malcolm, who was also one of the reasons why I was in London.

He was poor, like most kids at the school, and the violence was a part of his everyday life. But rather than run from it, he embraced it. When I imagine him now, I see him on his toes, squared up and ready to fight. It doesn’t matter who he’s facing. He fought everyone and no one in particular.

In 12th grade, when I was preparing for graduation and Malcolm was being held back again, I asked him if he had any plans for his life beyond the constant fighting. I used to fight a lot, to a lesser degree than he did, but I grew out of it. I wondered if he thought it was time for him to do the same. He said no, and that he knew he was going die doing what exactly what he was doing then.

A few years after college, I ran into one of our mutual friends at a Happy’s Pizza near my house and asked about Malcolm. I was told that he had been shot and killed. He wasn’t the first or only friend of mine who died like that, but he was the only one who knew it would end that way for him. Or at least vocalized it.

I had been thinking about Malcolm and trying to imagine what his life could have been on the night Jude texted me to say that she was disappointed I wasn’t coming to her birthday. It was two weeks before the event. I had promised to go but couldn’t save enough money in time for the flight. Or rather, I had enough for a flight, but not much else. Going would have meant that any small misfortune could have been financially catastrophic.

I thought that if Malcolm’s life had turned out differently, if he had escaped the physical violence of poverty, he would have turned out like me at the time, trapped by the mental and financial violence of it. I worked a mundane, soul-crushing job every week, and partied harder and harder each weekend as a coping method, as a way to have some agency, chasing immediate pleasures to avoid the nagging thought that there must be more to a person’s existence. I was frustrated by the lack of depth in my life but paralyzed by the fear of being one mistake away from falling back into the depths of poverty.

He would have probably found himself alone in the car one night after leaving a party early, having lost the energy to pretend to be enjoying himself, telling his friend in London he couldn’t go to her party because he couldn’t afford to, because traveling and seeing the world isn’t an option for poor people. What you do instead is live to survive, either by fighting or living paycheck to paycheck, juggling multiple debts, and hoping you can handle each upcoming disaster. And the disasters just keep piling on. If you don’t die by the physical violence of poverty, you are crushed by the anxiety of it. It’s really no life at all.

I kept talking to Jude that night and eventually booked the flight to London, leaving nothing in my bank account. It was a ridiculously stupid decision that I suffered the consequences of, but I needed to do it as a rebellion against the limited life I was living. It was a statement against the prison of growing up poor, and the idea that the goal of life is to live to work and sometimes treat yourself to an empty object that society had advertised as a signifier of success. I went because I wanted to expand my inner world.

When I was in passport control at Gatwick, I was as nervous as I was going to the Hamlet game. I had the fear of being an outsider, that I would be rejected and turned back. It was the fear that there was no other life for me beyond the one that I had grown up in, the irrational belief that what being poor makes you feel is actually what you are.

Gatwick was scary to get through, but the rest of the trip confirmed my suspicions about how grand and expansive the world is. Being in a land that I never thought it possible to visit, belonging to a community of people halfway across the world, it occurred to me the limits that poverty sets on an individual were not innate.

Malcolm didn’t deserve to be trapped by poverty. Nor did I. Standing before Harrington’s painting, seeing Malcolm reflected in that moment before the violence, I wondered what he could have become had he had the chance to let his hands fall and walk away from the fight that was imposed on him.