AARON radio: So for all you guys tuning in, we uh, Nancy McGunnell is totally AWOL.

AARON radio: Yeah, whereabouts unknown. She was last seen today going up in the twister, which is now a confirmed EF5

AARON radio: A confirmed EF5 tornado. So she could have basically been carried anywhere between 10 or 15 miles away.

DANNY radio: And there are a couple things about that. She obviously could have been thrown in any direction. So maybe she's upfield somewhere near Highway 34, or maybe she landed backwards near Seward. Although so far, nobody in Seward has reported seeing her.

MICAH radio: And Seward's full of Iowa fans. So chances are, if they saw her, they'd say something.

AARON radio: Micah, how many tacklers are reporting for Iowa?

AARON radio: And on the radio, they said they're setting a search area of 600 square miles. They gotta get way more tacklers than that. That's a tackler every ... uh

DANNY radio: Every, hold on.

DANNY radio: That's one tackler for every 7.4 square miles. It's not even close to enough, because the other thing is, what if she fumbled in the tornado?

MICAH radio: And she prolly did fumble.

DANNY radio: Yeah and she probably did. It's gotta be really hard to hold on to the ball in a tornado that strong. So who knows, maybe she has the ball, or maybe it's

NANCY: You can turn it off.

DANNY radio: just lying around in a field

DANNY radio: somewhere. If that's the case, they

NANCY: Yeah, I'm sure. Thanks.

DANNY radio: should tail her for a while and watch her. She probably has a better idea where the ball ended up than they do, so it'd be easier to just let her

BARTENDER: Sounds like a lot of 'em after you.

NANCY: There's gonna be a lot more, I bet.

BARTENDER: Can they do that? I don't really watch a whole lot of football these days.

NANCY: Three times a game, if you just can't find the ball carrier in open field, you can go back to your state and call for up to 1,000 volunteer defenders. They've got two of those left.

NANCY: Well, most of them aren't actual players. Usually they can round up a few retired players, but it's mostly just random folks. The volunteers are basically just eyes and ears. More often than not, they won't try to make the tackle themselves.

BARTENDER: Oh, you know what, I went on one of those volunteer plays one time. That must've been ... you know, I was married to Susan at the time, so that would've been around 12500. It was a whole bunch of nothing, really. I remember they came into town like, "hey, anybody wants to have some fun, they got a Minnesota player on the run outside Cedar Rapids!" I think what they offered wasn't much, like $100 and a bus ride. So I said no thank you.

NANCY: That's it? I think they pay a lot more than that these days.

BARTENDER: Well, I should've taken it! Because you know what happened is, next day, the county clerk shows up here in person, slaps an envelope right here on the bar, says, "Henry, I'm sorry to do this, this here is a summons to dress for Iowa and report to Cedar Rapids!" So I head out there, mostly just wander around Linn County with a flashlight, no idea what I was doing. Never saw the fella who had the ball, I guess they caught him in a corn field somewhere.

BARTENDER: I know it! I know it.

NANCY: I remember one time, I ran into a volunteer tackler and he just asked for my autograph.

NANCY: I said, sure, what the Hell? Why not, you know?

BARTENDER: Lemme see what's on, I think Judge Mathis comes on at 8.

NANCY: Oh I love him!

BARTENDER: Oh yeah, I like him a lot. He's my favorite out of all the judge shows.

BARTENDER: You sure you wanna stay put here with everyone after you? Not that I'm not happy to have the company.

NANCY: Nah, I like where I am on the field right now. They're expecting me to move right now, so I'm gonna sit here and sip a beer. And then around midnight, when they expect me to stay put, I'll move out.

NANCY: Well come on, I'm not gonna tell you that! I've known you about half an hour.

BARTENDER: You sure we haven't met before?

NANCY: Well I don't know, have we? 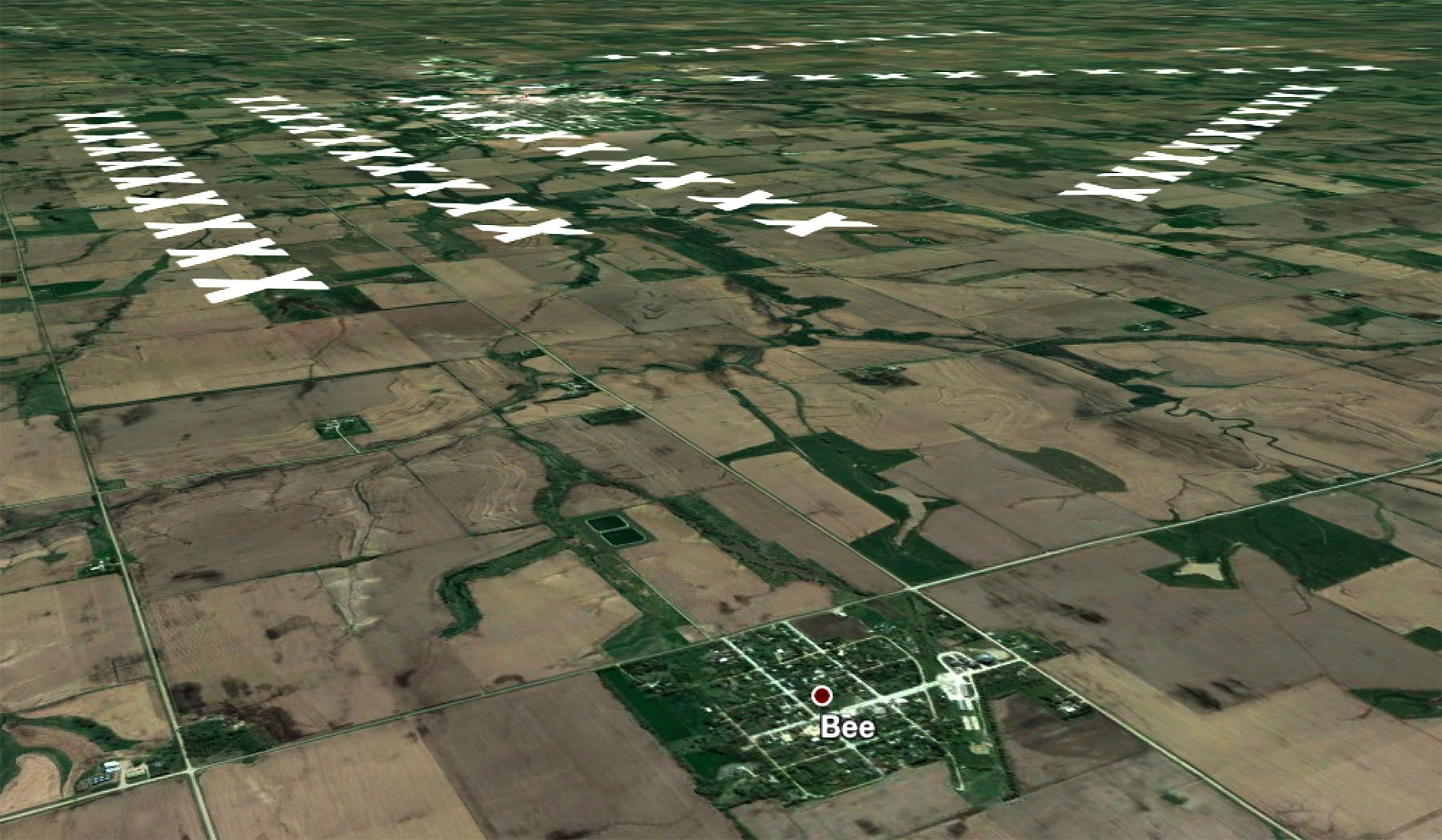 BARTENDER: Well you know what they were saying the other day on the news is, if you were born in 2000, you've been around for about five million days, think it was. So even if you met just one new person per week, you could meet a million people. Or something like that, I'm not some kind of math wiz. But point is, by now, you could've met just about everybody in Nebraska by now.

NANCY: I think I heard that! I've been teammates with a few folks who'd actually keep a diary of everybody they ever met.

BARTENDER: Shoot, I'm thinkin' about it ... I don't even leave Seward County all that much. Tell you the truth, I probably could fit everyone I met the last hundred years on a postcard.

NANCY: So how's living in Bee? What do you like about it?

BARTENDER: Well, there's not a lot to it. There's only about 40 people who live here. Farmers and their families, mostly. But you see, uh, right out the window there?

NANCY: Yeah, I was looking at that when I walked into town. That's kind of a funny-looking building.

BARTENDER: Well, that! That is the Bee States Ballroom!

NANCY: You got a story!

BARTENDER: You got time?

NANCY: You got another one for me?

BARTENDER: Sure, another of the same?

BARTENDER: Yeah, I'm with you there. When the rep comes by he's always trying to sell me on all these, I don't know, these beers with chocolate and grapefruit and all these other flavors.

NANCY: Well Hell, I'm not trying to drink my dinner!

BARTENDER: Well, so I don't know if you remember the WPA, but it was a big work project put on by the government to give people jobs during the Great Depression. They'd go around and build parks and roads and who knows what else. All kinds of things.

NANCY: I remember that! It was a little before my time, but I remember my dad used to talk about it, he didn't think too much of it. He called it uh, what did he call it?

NANCY: Oh, he said the WPA stood for "whistle, piss and argue!"

BARTENDER: Ha! I never heard that one, but yeah, I know some folks weren't really fans of it. "Whistle, piss and argue." But no, I think it was a real good thing around here.

BARTENDER: So there was a bunch of Polish people living around here in the 1930s, and one of them was Vlad Sobotka. He was an architect in charge of a WPA project to build sidewalks in town here. And him and his men did a real good job, a lot of the sidewalks are still in place. Probably because they aren't used very often.

NANCY: Yeah, come to think of it, I didn't walk on the sidewalks to get here. I just walked down the middle of the street.

BARTENDER: Yeah, I guess the main reason you put down sidewalks is for so kids don't just run around in the middle of the street. And it's not like there's any kids around.

BARTENDER: So anyways, this fella Sobotka and his workers finished the sidewalks way ahead of schedule, so they had nothing to do. And he wants to do all he can to make sure his men have work. And it turns out, they still have a whole bunch of leftover materials, lots and lots of it. So he stays up all night, and he draws up blueprints for this crazy 12-sided building.

NANCY: He drew it all up in one night?

BARTENDER: I think so. I have no idea how he came up with the idea. Maybe he saw a building like that before or something, but I don't know. I mean he was just a guy in 1930s Nebraska, there wasn't a lot to look at for, you know, inspiration. You know, I honestly think he just made it up out of nowhere.

NANCY: That's what caught my eye about it. It almost looks like some kind of weird spaceship in the middle of this little town. 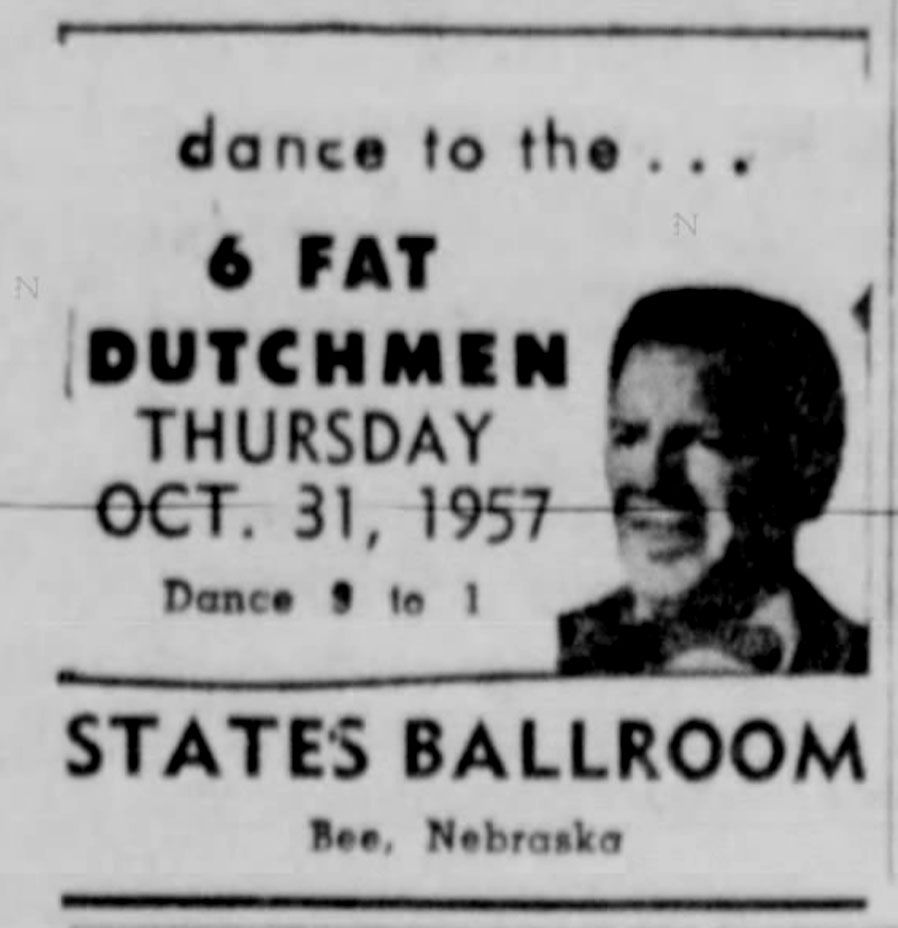 BARTENDER: Kind of does a little bit! And what's, the real wild thing about it is that they built the whole thing in a couple of weeks using nothing but sidewalk materials.

BARTENDER: Yeah, because when you lay down a sidewalk you've got to have wooden planks on the sides to kind of mold it in when you pour in the concrete. So the whole thing is nothing but a little bit of wood and a lot of sidewalk concrete.

NANCY: So it's a whole building made of sidewalk.

BARTENDER: Whole building, yeah. And I bet you there's not another building like it in the whole world. And we got it right here in Bee. 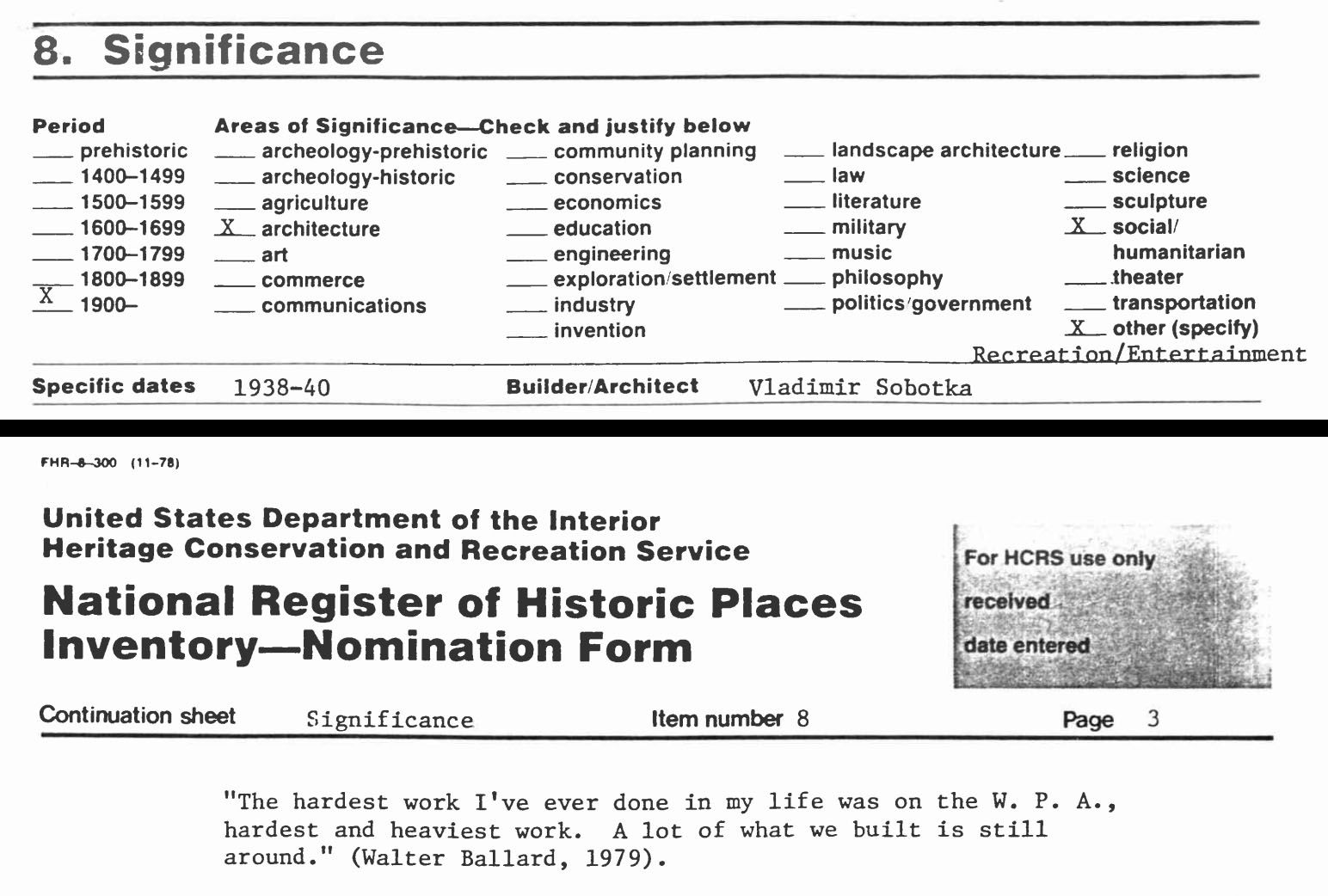 BARTENDER: Come to think of it, I guess maybe that's a pretty boring story if you're not from

NANCY: I had the funniest thought up in that twister.

NANCY: I was thinking, "I have no idea where this thing is gonna throw me, but I know I'm gonna land on top of a story."

NANCY: I wonder if there's a single place in the whole world that's never had a story. I bet not. I just about guarantee you there's no places like that in America. Every little square of it, every place you stomp your foot, that's where something happened. Something wild, maybe something nobody knows about, but something. You can fall out of the sky and right into some forgotten storybook.

BARTENDER: Seems okay to me. 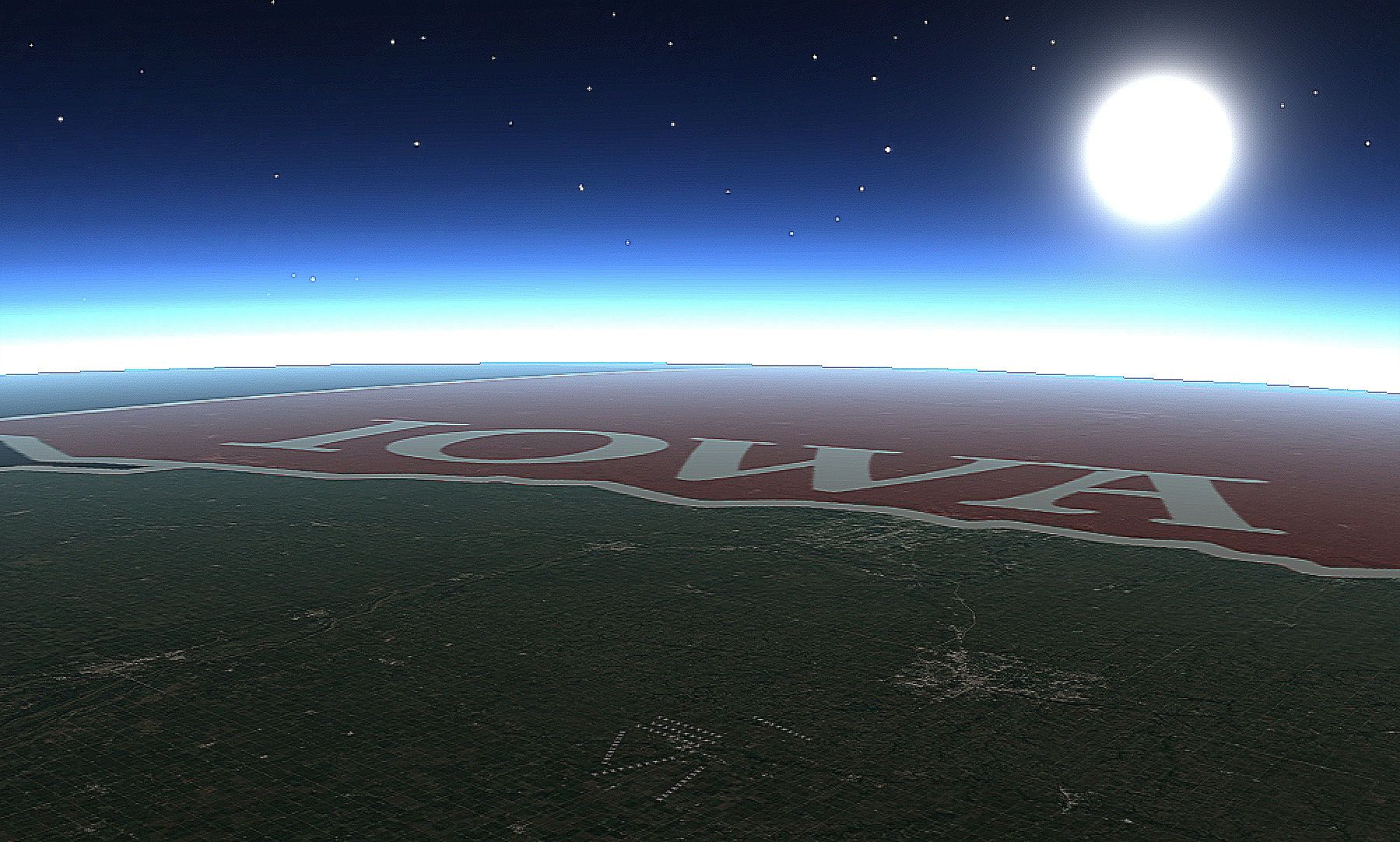