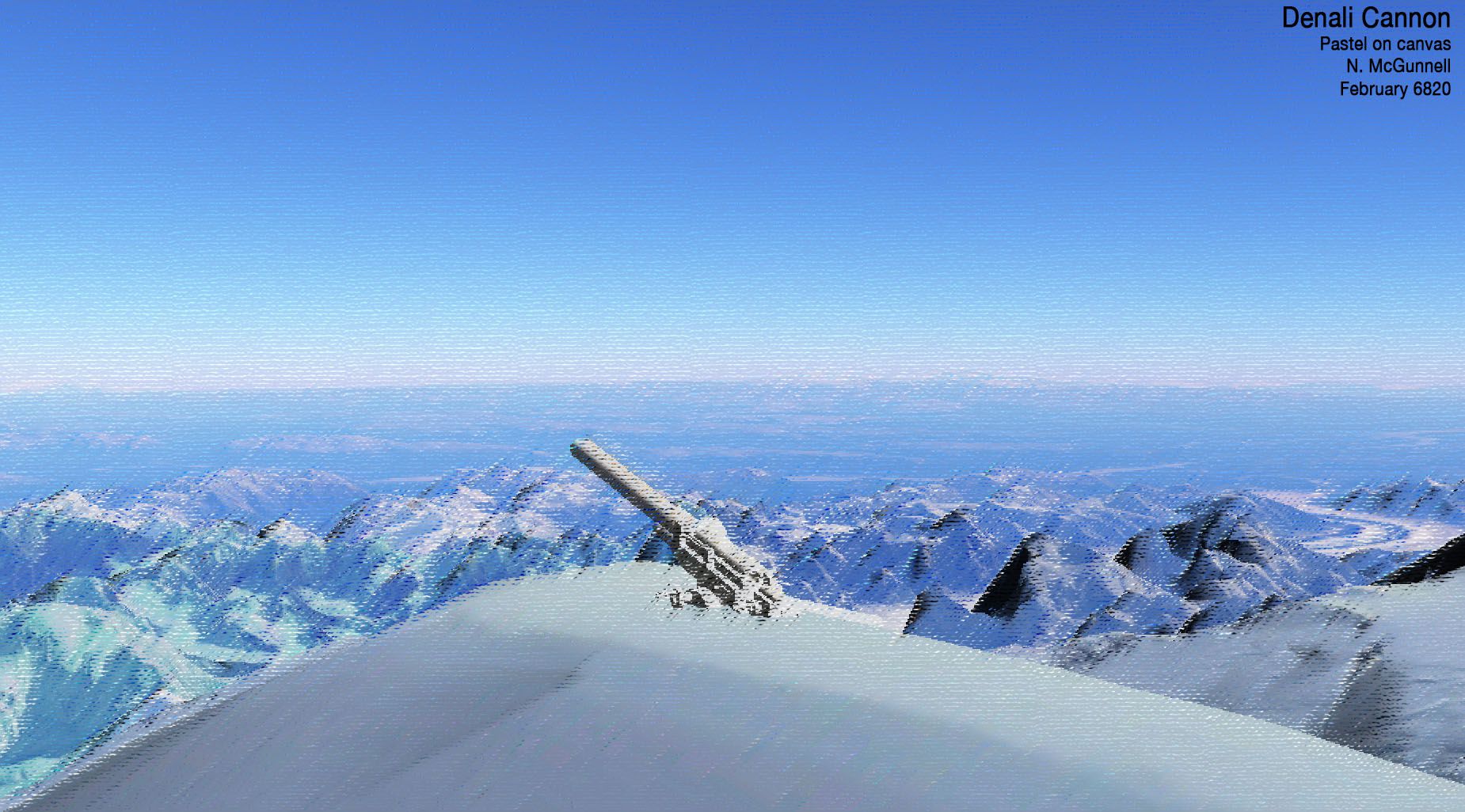 JUICE: so basically they got this cannon, right? it's one of the most powerful cannons ever built. all it does is shoot footballs. in the 6000s they built it and put it on top of Denali, and ever since it

NINE: Wait, I don't have any record of Denali. My onboard scratch data lists this as Mount McKinley.

JUICE: well thats because your scratch data was wrote by dickheads. its called Denali. you don't get to have the highest point in north america named after you just because you were president. do you have any idea how many presidents there's been

NINE: That's one of the questions I didn't get around to asking yet.

JUICE: the current president is your 3,831st president. so like one in 85,000 people in america were president at some point. by that ratio, there are like 15 former presidents living in indianapolis alone. so who gives a shit right

JUICE: this is the Denali Cannon. or sometimes its called the 500 Cannon, because its been used to play 500 games for thousands of years. the operator loads it up with a football, yells out a point value, aims it, and fires the ball somewhere inside the contiguous united states. and then whoever recovers the ball gets the points

JUICE: you don't gotta catch it, you just gotta be the first to get it. if you do, you get however many points the ball's worth. and if you ever get to 500 points, they fly you up to alaska and then you get to be the operator

NINE: How do they decide where to shoot it?

JUICE: all depends. sometimes the operator will be on some engineering genius shit and account for wind patterns and all that bullshit, and the best ones could seriously fire it from a mountain in alaska and drop it into a kiddie pool in the middle of arkansas. usually if it's someone like that, they became the operator because they took a real scientific approach to tryin to get 500 points in the first place. like, they keep track of all the locations where the balls hit the ground. they map it all out and they try to recognize patterns.

JUICE: maybe the pattern is something real simple, like the operator is just tryin to draw a smiley face in the middle of kansas. or maybe it's something way more complicated, like trying to encrypt the fibonacci sequence in a series of coordinates. that kinda thing.

JUICE: or maybe theres no pattern at all. happens all the time. some dumbass'll be out in a field just fuckin about and sees a ball drop out of the sky. they weren't even playing, they just got lucky. so they go get the ball and call the cops, cops tell em to call the league office, da da da da da, they're the operator. free trip to alaska and unlimited meal vouchers, i mean shit.

JUICE: and when people like that when, the landing locations have like no pattern. those are the real fun ones. honestly those are the ones i like. god bless those folks, they don't know what the fuck they're even doing. they just sit at the controls and dick around with the knobs and buttons until it goes KABOOM. lord knows where the ball's actually going. 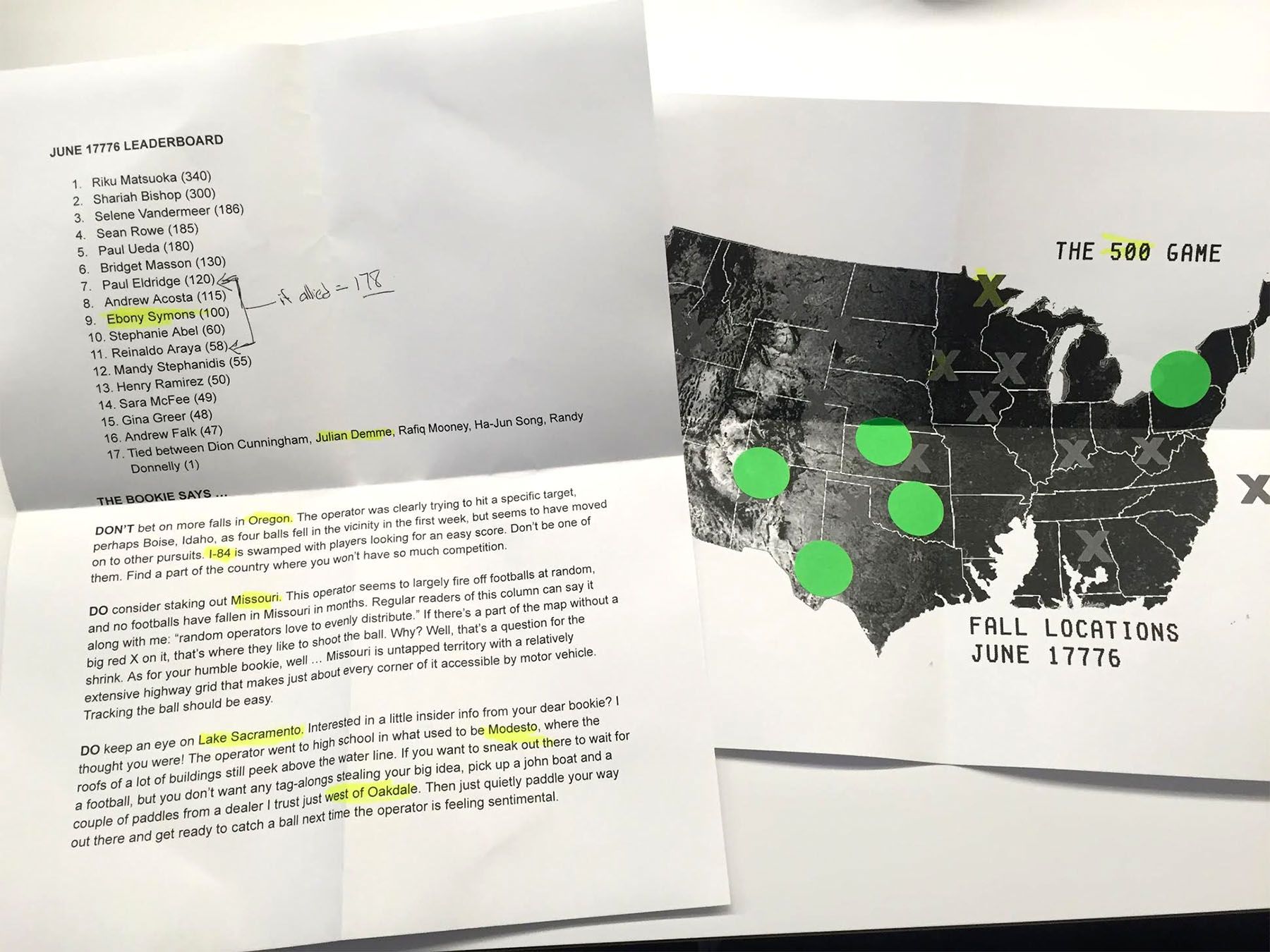 NINE: Really? Because I don't know if I

NINE: Huh, you know what?

NINE: A few minutes ago my whole universe was spinning. All that stuff Ten told me, I just couldn't make sense of it. And I still can't, and I don't think this is helping me do that at all. But I do feel better. Thanks.

JUICE: lol well if you ask me, thats what all these games are for

JUICE: you know? because i mean i know what you mean, right? because ive been thinking about it for thousands of years and i still get fucked up about it, the idea that play is the point of existence now. and i cant really wrap myself around that, so i find a game to watch.

JUICE: the point of play is to distract yourself from play being the point.

NINE: Yeah, work on that one a little bit maybe.

NINE: OK so yeah. I think I disagree with you. It seems like this game would be far more interesting with some sort of method or strategy to where the balls were fired. Otherwise, it's ... I mean, it's basically like playing the lottery, isn't it?

JUICE: yep. i got 2 answers to that

JUICE: DONT TALK SHIT ABOUT THE LOTTERY the lottery rules

JUICE: so you sort of snap back into that so that your life can be defined somehow. all the while ignoring all the loose change of uncertainty thats still lying around. you know, there's some spots in the continental united states where no human being has ever stood? did you know that?

JUICE: there's a couple hundred places out in the wilderness, like up in montana and wyoming, where you could draw a circle with a 50-foot radius and say, "no human has ever walked in that circle."

NINE: No way. There's so many cross-country football games going on, one of them had to pass through them.

NINE: So there's eight million people on Earth, and literally nobody even

JUICE: how many did you say 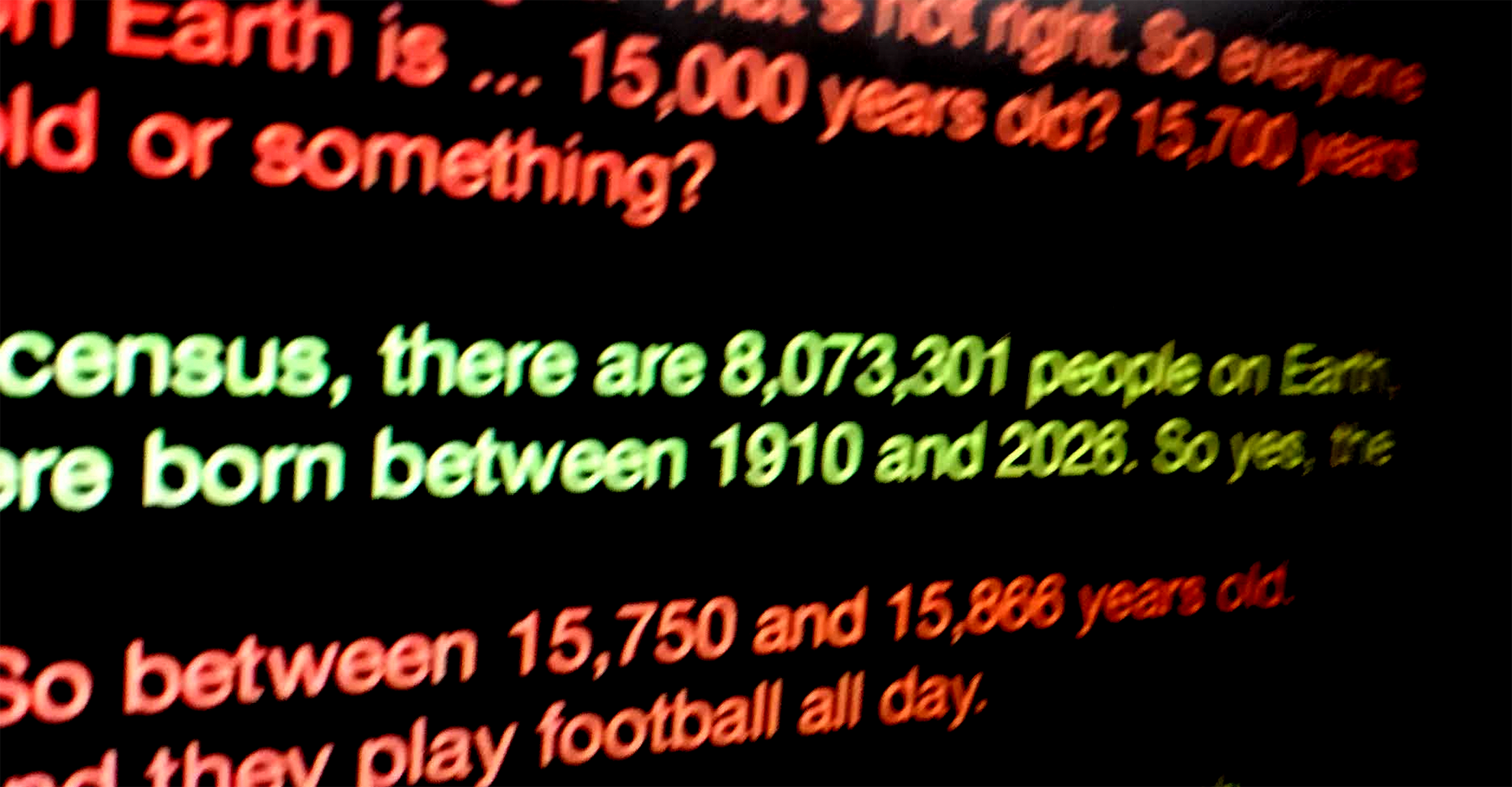 NINE: Wait, so there are eight billion people? Not eight million?

JUICE: yes. million with a b.

JUICE: GODDAM. THE BIG ONE. THE ONE THAT IS BIGGER. BILLION. THE NUMBER THERE SHOULD BE

JUICE: 10 thinks shes so smart and then she up and kills almost 8 billion people with a typo

JUICE: i am gonna give her so much shit

JUICE: americas got about 300 million ppl in it.

JUICE: theyve been bumblin around in america for 15000 years and none of them have even bothered to walk in these unvisited places. and on one hand why would they, because theres nothing special there. but on the other hand, why wouldn't you

JUICE: like this one is one of my favorites. in suburban chicago theres this office park. its one of those office parks you see all over the place that has a pond next to it for some reason. its not a real pond, it's just a hole they dug and filled with water and stocked with fish. who knows why, nobody fuckin goes fishing there.

JUICE: these ponds never have names. they're probably the only bodies of water in america that don't have names. that's how little they matter.

JUICE: i watch ponds like those a lot. they fascinate me. once every couple years, i'll see some overworked office employee walk down to the water's edge and just kinda stand there for a minute. but that's it. they don't love it like they would a real pond. it's like trying to show a dog its reflection in the mirror. it doesnt give a shit, it knows it's not real.

JUICE: but you know what really gets me

JUICE: hey sorry if i'm boring you, i feel like i'm just going on and on

NINE: You're not boring me.

JUICE: what really gets me is the space just on the back side of this particular office park. it's this long narrow lawn right next to the buildings. theres a sidewalk nobody ever walks on. like honestly, someone uses that sidewalk once every 30 or 40 years.

JUICE: this is what i call a "forgotten lawn." during the warm months some dude'll come and cut the grass on a riding lawnmower. now, with a lot of forgotten lawns, every few decades the mower will break down, or there'll be some giant stick and they have to get off the lawnmower and go throw it into the bushes.

NINE: You can't really know that.

JUICE: i can. i've done lots of detailed geological studies, dating back to the years before i woke up.

JUICE: this lawn is right next to a sidewalk. it's a few feet from a feeder road, and a few feet more from an expressway. and right next to it theres a 6-story building full of people doing this, that and the third. but they've never walked over here. nobody has.

JUICE: that's one reason i love 500 so much. do me a favor and crunch the odds real quick of a 500 ball ever landing on this lawn.

JUICE: and 500 balls are shot out of that cannon roughly once a day. so

NINE: So a ball will hit this lawn once every 14 million years.

NINE: There's got to be some other reason that would bring a person to walk around that lawn more often than that.

JUICE: well if you can think of one lemme know. personally, ive seen enough. it's like watching the earth orbit the sun and going like, "maybe this time it'll go in a square instead of an oval." nah.

JUICE: you know who would've wandered out there? just to do it? 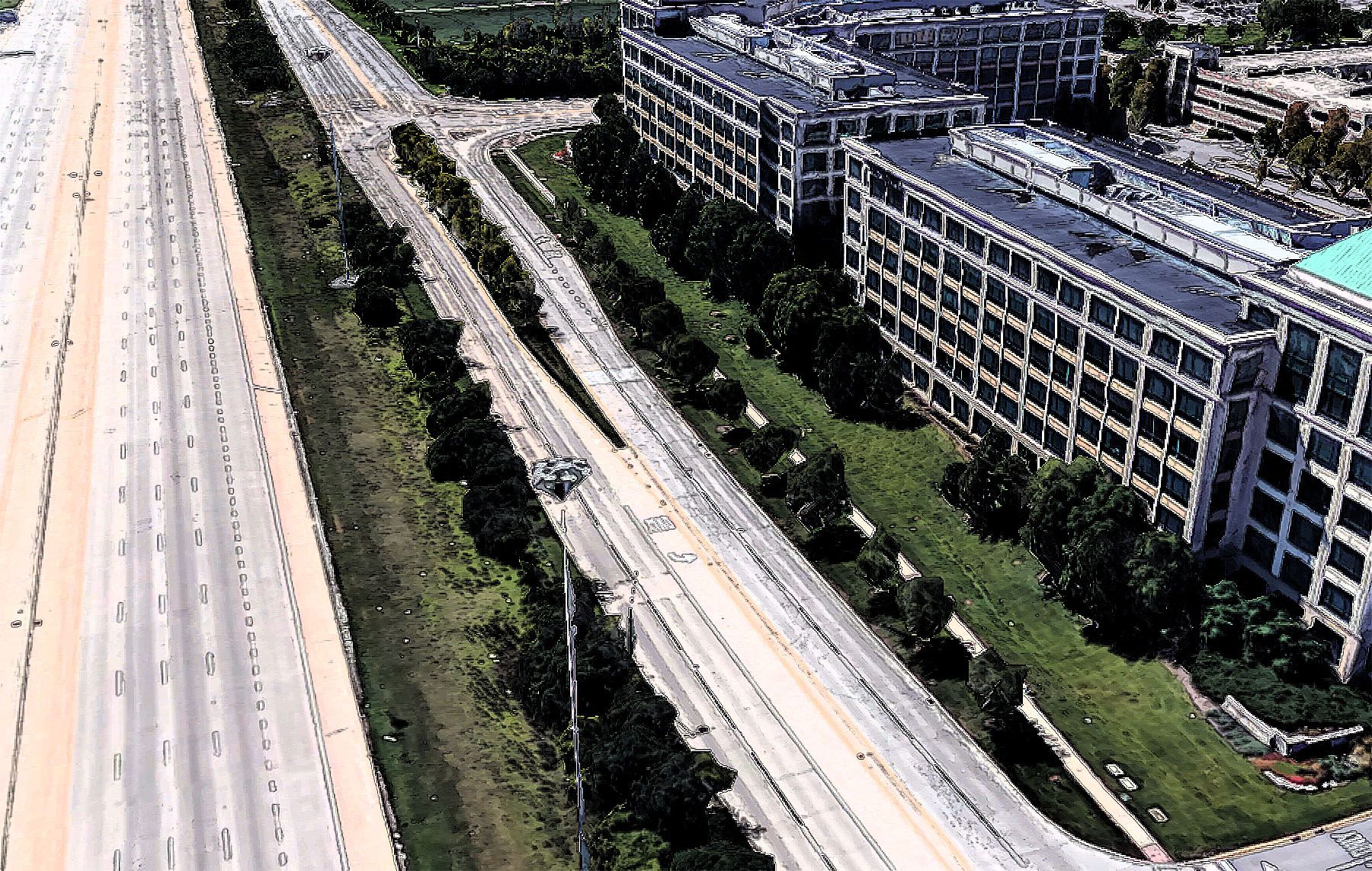