AARON: Micah's got the wheel and Danny's gonna come to you with the play-by-play. Uh Danny, what do you uh,

DANNY: So we're live in the middle of Game 3887. Field of play Nebraska, end zones Wyoming and Iowa, next score wins. 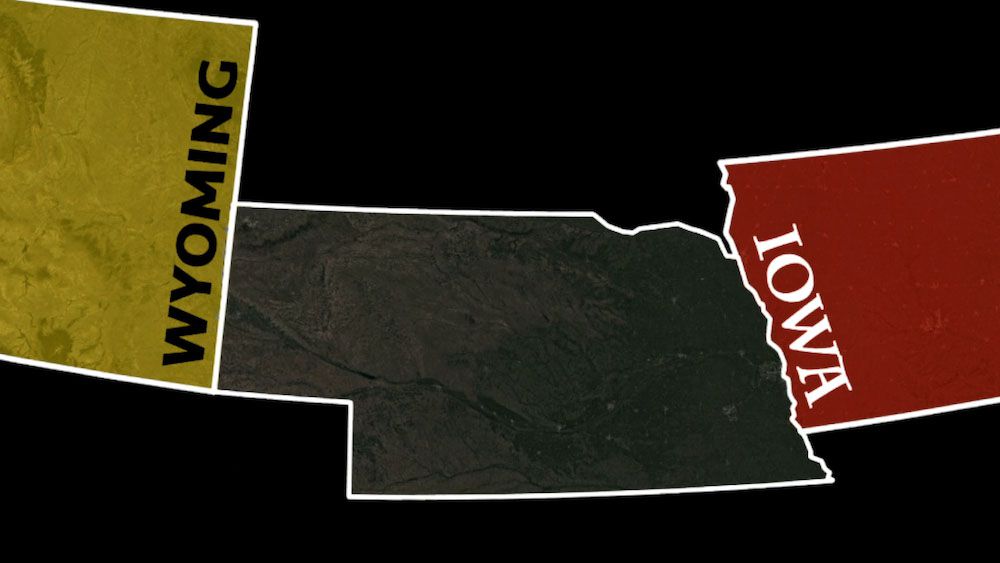 AARON: Next score wins, yeah, and it's tied 24-24. A lot of guys are trying to chase this game, but we're the only ones who have been on top of it the whole time. We've been chasing it eight years now.

MICAH: Eight and a half years now.

AARON: Yeah, eight and a half years now. Micah, speed up.

AARON: Oh. Uhh, hold on, get up next to him. Roll down the window.

COP: You boys need to keep your distance.

COP: You can do that from out here. You don't need to get close to the twister.

MICAH: This is stupid dude, I've been in like 20 twisters.

AARON: Officer, we've been in a lot of tornadoes. We know how to handle ourselves. This game here is headed straight toward the tornado. It might go up in the twister.

COP: You're plenty close for that.

AARON: Sir, if we could just

COP: This is not a debate! I am not going to debate with you! I am, what I'm gonna do is I will pull you over and bring all three of you before the county magistrate. Do you want that?

AARON: This is bullshit.

MICAH: Is that Nancy?

AARON: That's Nancy! This is ... gimme the camera. Everybody, you're looking at Nancy McGunnell, about uh, 500 feet outside our driver's side door. She's running eastbound, just north of

DANNY: You want me to do a game reset real quick? We got some more followers, looks like we got like 400 viewers right now.

DANNY: OK so it's July 2nd, 17776. We are in ... we are just about a mile east of Seward, Nebraska, driving eastbound on McKelvie Road. We're following Wyoming running back Nancy McGunnell, who is now about 82, 83 percent of the way across the state.

DANNY: This game's been tied at 24-24 for about a year. Right now, McGunnell and Wyoming have the best chance they've had in a while to put this one away. As the crow flies, she's only about 117,000 yards from the goal line.

AARON: Where do you think she's headed? Straight across?

DANNY: Well if I were her, I might actually cut northeast just a little bit to try and cross in Omaha. Lots of buildings, lots of suburb, plenty of places to hide.

DANNY: And you know, if you're in an urban center, it's damn near impossible to chase down a lone ball carrier, no matter how many defenders you have. A long time ago I was calling a game that went through Knoxville. Guy caught a pass and disappeared into the city one night. There were no fewer than five thousand defenders looking for him. Took 'em months.

DANNY: Yeah, it was one of those mob games. They finally found him in a broom closet in one of those big buildings downtown, he was

MICAH: Shit dude, she is running right toward the tornado.

AARON: Dude she is. 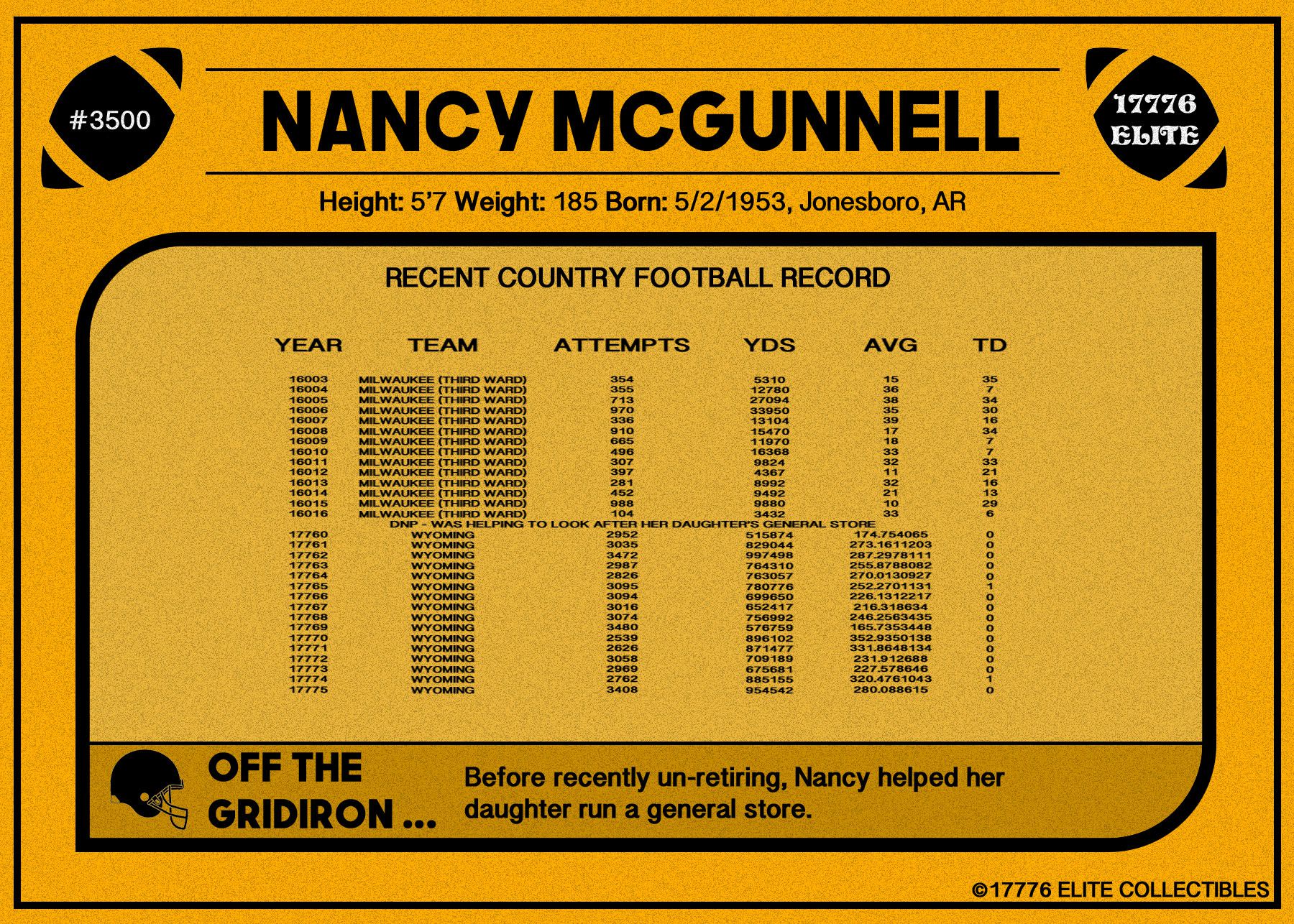 AARON: You've seen what, a player run up into a twister?

DANNY: Yep. She planned this. I guarantee that Wyoming planned for this. Here, I can draw this up for everybody.

DANNY: This morning, the line of scrimmage started in Gresham. Nancy caught a screen pass, actually ran backwards a couple blocks, then just bolted down Road V until she hit Lincoln Creek. She followed the creek for 20 miles, and

AARON: For the cover.

DANNY: Yeah, for the cover. By running on the far side of the creek, the creek kind of, it becomes like a blocker. All of a sudden, Nancy's got nothing but daylight until the next bridge. They finally get to the bridge by Seward, which, Seward's got something like 12 streets running vertical and horizontal. That's real good news for a runner with Nancy's speed.

MICAH: right up on the tornado.

DANNY: Which is, that's obviously what she's trying to do. Look at the third and fourth lines of defenders. They're closing in ... with all these plains, she's not gonna have any cover, they'll see her from a mile off. Only way she can shake them now is if that twister picks her up and throws her downfield.

MICAH: Oh, it's absolutely an EF5. Look at that. See that flying around?

DANNY: How far do you think it might throw her?

MICAH: Pffff ... I don't know, I mean just by looking at it, it's one of the strongest-looking tornadoes I've ever seen. A human being could go five miles, ten miles. Only thing is, there's no telling which direction.

MICAH: So I mean we're coming right up on this thing. Any closer and we're gonna get crushed by a flying train car or some shit like that. And I just bought this damn truck.

AARON: Bullshit you just bought it! You bought it like 40 years ago.

AARON: No bullshit man, you did! Remember, I was there with you. Remember when we went to uh, Davenport and we bought it off that dude?

MICAH: Man I don't know, maybe. Who gives a shit, this is one of the best trucks I've ever had.

AARON: Why? What about this fuckin' 11083 Silverado is

MICAH: You can fit a big pop into the cup holder.

MICAH: Cup holder. Obviously you can hold pop in it but you don't have to restrict it to

AARON: You like this truck because you can roll around sippin' a goddamn 800-ounce chug-a-lug or whatever.

AARON: [laughing] You're such a dumbass dude. You're a dumbass.

AARON: Whoa we got like lots of people watching.

MICAH: Is that a record?

AARON: For us I think so, yeah.

DANNY: OK so for everybody who's just tuning in, Nancy McGunnell is about 25 miles into a run-- dude, don't point it at me! The twister, look at the twister!

DANNY: She's trying to, or at least we think she's trying to get herself caught in the tornado and get flung somewhere downfield. You are watching football history right now as

MICAH: Earlier I was keeping pace with her, she was probably running 20 miles an hour. Easy.

DANNY: Which, and that's what makes her one of the best running backs playing in the Midwest right now. If she can create a little bit of space and go on a distance run, she might turn the jets on you at any

DANNY: NANCY'S UP IN THE TWISTER! SHE HAS LEFT THE

AARON: I don't know, I just posted it. Just seriously,

AARON: just look it up. I gotta go.

DANNY: SHE IS NOT COMING DOWN, SHE IS IN THE FUNNEL, MOVING UH, SOUTH-SOUTHEAST AT

JUICE interrupting: cmon man what this is gettin good

NINE interrupting: This? What is this?