"The horror," as Wolverines fans refer to it, of FCS Appalachian State’s 2007-opening upset over No. 5 Michigan set the tone for college football’s most unpredictable season. It’s sometimes called the greatest upset in football history.

It also struck a blow for the spread offense as football’s equalizer.

The Wolverines had just missed out on a BCS Championship berth in 2006. Their powerful, pro-style offense returned stars such as quarterback Chad Henne, running back Mike Hart, wide receiver Mario Manningham, and left tackle Jake Long. UM was favored by five scores, though many oddsmakers didn’t even bother posting the game.

Appalachian State was a powerhouse in its own right. The Mountaineers returned quarterback Armanti Edwards, who’d passed for 2,000 yards and rushed for 1,000 as a true freshman, and they had senior skill players on both sides of the ball.

"We had a pretty confident team," Appalachian State head coach Scott Satterfield, who was Edwards' QB coach in 2007, tells SB Nation. "We'd just won two [FCS] national championships in '05 and '06, and had a lot of players back. We just kinda approached it like, 'Let's go in here and have fun.' Never talked about upsetting the No. 5 team in the country."

"Going into that game, we didn't show much film on Michigan to our players, because they were coming off a Rose Bowl the year before, and they looked really, really good. We just focused on what we do, and that was spreading them out and getting our skill players into space."

Those players were about to make an emphatic point about the direction of football.

The parameters were established during each team’s opening drive.

Michigan got the ball and ran it down the Mountaineers’ throats with the stretch zone they’d installed the prior year:

This is a flexible, potent scheme. The blocking fullback can adjust his path, based on the OL. If the line takes care of the play-side defensive tackle (the "T" below), he ("F") leads through the hole on that DT’s outside shoulder. If they fail, he cuts inside and helps clear a cutback lane. 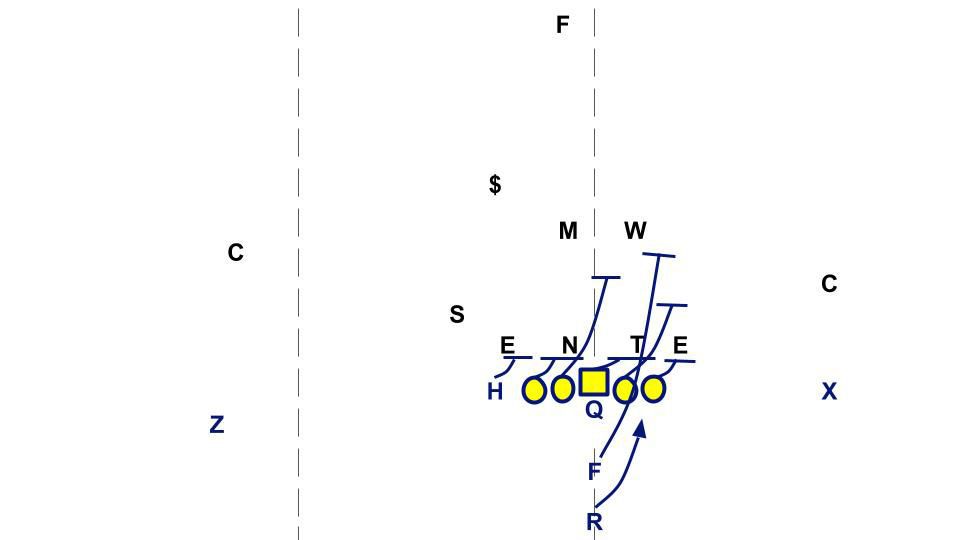 Appalachian State’s plan was to play eight-man fronts and lean on star senior cornerback Justin Woazeah in man coverage against Manningham. It was a good plan — until the end, Manningham had only two catches for 20 yards — but wasn’t enough to stop Hart.

But then the Mountaineers went to work in their spread offense.

They got into empty-backfield sets and found Michigan’s plan was to match with five-DB personnel. The Wolverines were mostly playing loose, single-safety man coverage. That left them vulnerable to the App State spread, particularly on the weak side (here, the side with fewer receivers), where it was basically two-on-two. 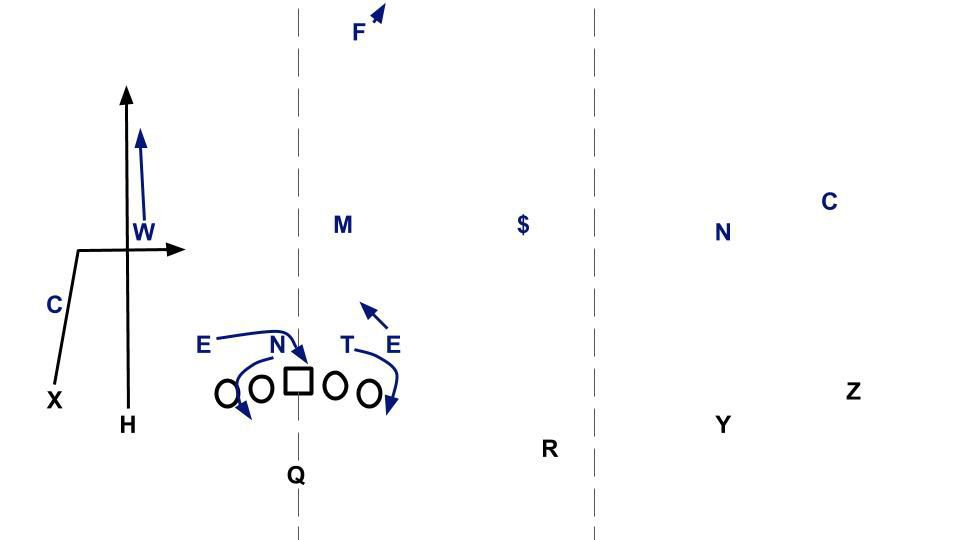 The plan was to emphasize the battles between their senior skill players and Michigan’s.

When the battle was in the trenches, Michigan had a decisive advantage. Long and company were powerful athletes that App State couldn’t match. The Michigan OL averaged 6’5, 302 pounds, staying lean enough to execute reach blocks on stretch plays, while the App State OL averaged 6’3, 276 pounds.

"Our D-line wasn't doing the best of jobs, and they had Jake Long sitting there throwing people around," Corey Lynch, who blocked the final kick, later told ESPN.

But when the battle was out in space, Appalachian State was superior. While elite receivers and cornerbacks get major attention from the recruiting services, the world simply has a lot of good athletes in the 5’10-to-6’2, 170-to-210-pound ranges.

"We don't have the same number [of top athletes], but we do have some guys that are just as good as anyone in the country," Satterfield says to SB Nation. "Maybe our guys are an inch shorter or something like that, but at App, we've always tried to recruit speed. We may be a little bit undersized at certain spots, but we always have been able to run."

Michigan had the offensive formula right but a bad plan on defense.

It was seemingly based on a presumption that its skill athletes could best receivers like the 5’9 Jackson, who finished with 111 total yards and two touchdowns and later ran a 4.37 at the NFL combine.

"They were playing off man, and we had time to catch the ball and hit some underneath routes," Satterfield says, "and so we were able to hit [WR] Dexter Jackson a couple of times. He can run, but the thing he didn't like is if you crowded him. But when you go man like that, he thought he had a lot of space, and it gave him confidence to say, 'All I gotta do is catch this ball, and then I can use my speed to outrun them.'"

It’s better to be superior in the trenches than out wide ... provided you don’t allow explosive plays. It took Michigan a while to realize it couldn’t survive with so much man coverage on the perimeter.

"If they'd walked down and pressed our receivers, I think that would have put more pressure on our guys, but they played off, even though they were playing man. Once we had a little bit of space, then we were gonna take off with it."

Then Hart went down, and things really went south for Michigan.

He suffered a thigh injury with 13:20 left in the second quarter and missed almost two entire quarters. During that time, Appalachian State outscored Michigan, 17-6, while Henne and backup RB Brandon Minor posted the following stats:

Meanwhile, the Mountaineers kept getting Jackson loose in space.

Look at the bottom, where No. 61 is leading the way. Sophomore left tackle Mario Acitelli sells the fake to the right, then slips to the left and eliminates the cornerback. A 6’2, 275-pounder with good feet might struggle to command a top Big Ten defensive lineman, but he’s a load for any defensive back.

The score reached 31-20, App State, before Hart returned late in the third quarter. The "single biggest key," per Bill Connelly’s advanced box score, was App State keeping the chains moving on third down.

With Hart back, Michigan flipped the focus back to the trenches.

After coming back, Hart got 13 carries that he took for 131 yards and two touchdowns. Most of it came on the same play design that’d seemed likely to control the game. App State’s defenders were losing their legs.

"We kinda knew that they were going to make a run in the third quarter," Satterfield says, "and Hart started getting a lot of yards. We felt afraid a little bit defensively, because if they continued to hand the ball off, then they would have a good chance of grinding that game out.

"But they threw the ball like [37] times, and Henne was about 50 percent and threw a pick, and that kept us in the game. We were glad they were doing that."

On defense, the Wolverines were figuring out that if they played more cover 2, they could avoid their linebackers getting dragged down the field in man coverage. They could dare App State to run the ball with undersized OL.

The Appalachian State solution to two-deep coverages — and the Mountaineers’ need to run down the game clock — was to get into 11 personnel (one RB, one TE, three WRs) and use the TE to assure double-team blocks on DTs. Then they’d try to run downhill with inside zone. They had some small gains, but the Wolverines took away even that.

You can see DE No. 90 (Tim Jamison) pushing the TE inside to close the C-gap, allowing the defense to hold up with a six-man box. While double teams allowed the Mountaineers to keep the Wolverines out of the backfield, they couldn’t move Michigan off the line.

"The only success we had running the ball was spreading them out," Satterfield says.

With the Mountaineers finally slowed down and Hart running wild, Michigan retook the lead, 32-31.

Then the truly horrifying things happened to Michigan.

Appalachian State blocked what could have been a clinching field goal from 43 yards out. (Not the block, but the other one.)

Appalachian State started driving again, mostly thanks to Edwards — who finished 17-of-23 with 227 yards, plus 62 on the ground — making ridiculous, spread-QB plays like this:

"The thing that they were able to do was get some pressure on Armanti coming off the edge, and that was a little scary at times," Satterfield says, "because he was taking some hits. And Armanti coming into the game, he didn't even practice the two weeks leading up to that game because he had a shoulder sprain. He was dinged up, but he stayed in the game and made some plays."

That set up a 24-yard App State field goal that was converted — not blocked! — but wasn’t the dagger.

"We were trying to mix in the running game, and then on that last drive, we went right back to empty and went right down the field again and kicked that field goal when we needed it," Satterfield says.

Then, Henne found Manningham on a deep fade, finally beating Woazeah, to set up a 37-yard kick for the win.

"I had blocked a field goal against Furman the previous year, and it was the same exact thing. We said, ‘Let's just run the Furman block and see if it works again,’" Lynch told ESPN. "[App State’s] outside guy goes to get the attention of the outside man on offense. And if the second man will not look at me for a second, I can squeeze through that gap. I was so fast, I almost overran the field goal block."

This was a landmark in the proliferation of the spread.

In addition to everything else, this was a moment when spread offense allowed an undersized, outmanned, but wonderfully athletic team to go toe-to-toe with a blueblood.

"The game has evolved since then," Satterfield says. "Most everyone is doing some version of the spread now. The defenses have tried to catch up, and to a certain extent, they have, by putting more speed on the field. We've kinda gone back to running the football and a little bit more slowing the game down and limiting the offensive possessions for the other team, and that's helped us since we moved up to the FBS level. But the game is always evolving."

For Michigan, it all happened again the next week, against Chip Kelly's Ducks:

Oregon head coach Mike Bellotti: My fear was that [Michigan] got exposed a bit vs. Appalachian State, and they're gonna know what they have to do to stop this style of offense.

Oregon DB Patrick Chung: The best was how much of an underdog we were. We had no chance — Big House, one of the biggest stadiums. The guys on our team, we liked stuff like that.

Oregon OL Geoff Schwartz: I remember meetings with Chip right before the game. Even during the week, he was just so confident. When Brian Paysinger scored on a long touchdown catch early — just blew by — I thought, "Ok we're faster than them." And then Chip brought out the big plays.

Bellotti: What happened was they got simplistic and played three deep. We literally ran by them.

"Chip Kelly called me that Monday and just asked anything to expect or this and that," Satterfield says. "Of course, I didn't have anything to give him.

"We just went in there and spread them out."