LSU won a national title despite losing twice in 3OT. Let's talk to Arkansas and Kentucky

In plenty of other seasons, either one of these losses would have ruined a team’s chances at a national title. But 2007 wasn’t your typical season.

These two games weren’t just weird footnotes to LSU’s strange championship, either. They were classics themselves.

LSU’s defense entered as one of the best in the country, giving up only 198 yards per game.

The 5-1 Wildcats were 10-point underdogs at home. Kentucky senior quarterback Andre Woodson, who had thrown 18 touchdowns on the year, appreciated the magnitude after a loss to South Carolina the week before.

"The biggest challenge for us what trying to regroup and refocus on a team that certainly was the best defensive unit in the nation," Woodson told SB Nation. "A very dynamic group, very explosive, had a lot of skill players. So there was a lot of challenges that we knew we would have to face."

"The memory of our performance at LSU the year before, when they bludgeoned us," former head coach Rich Brooks said to SB Nation, "which happened to be the turning point of our program in 2006 because we came back and beat Mississippi State, and then beat Georgia, and finished with a bowl win against Clemson. So we used that game in 2006, the beatdown at LSU, as motivation to finish that season, and then we wanted to show LSU that we weren’t that same team."

This set up to be one of the biggest home games in school history.

Late in the third quarter, an LSU field goal gave the Tigers a 13-point lead.

"It certainly felt like the game was getting away, if UK didn't score following LSU's last field goal," A Sea of Blue’s Jason Marcum said.

"Our unit never really got flustered," Woodson said. "We were pretty collective on the sideline. We always felt very confident that we could get ourselves back into the game."

The Wildcats tied things up late in the second half while transitioning to a quicker, no-huddle offense, something that was still pretty uncommon in 2007.

"That allowed us to somewhat pick up the pace and make the adjustments from the line of scrimmage," Woodson said. "And then from that perspective, I think that really gave us the ability to kind of prevent them from resting and really allowed us to take advantage of some of our deeper package, intermediate routes, and vertical concepts."

"When you play a team that is very methodical, which LSU was, both offense and defense, I think we needed to change the tempo," Brooks said. "That’s what we decided to do. I think we got them on their heels a little bit."

"Seeing the Cats respond with a touchdown to cut it to 27-21 made it feel like UK could make this a game," said Marcum.

Kentucky had the ball first in OT, and Woodson was faced with a third-and-goal.

The quarterback found Stevie Johnson, who’d ran a slant-and-go in the right corner.

Woodson said his audible was based on something he'd seen from LSU the year before. UK had noticed Jonathan Zenon jumping on slant-and-go routes. (Zenon's aggressiveness would later make him LSU's SEC title game hero.)

"We recall that he was super aggressive, and he was consistently timing and jumping on the stem of that route and actually breaking the pass up. So, I recall talking to Stevie Johnson and [WR] Keenan Burton prior to the game, and our recollection was it was this same corner, and if we have the opportunity, and we were at the same distance, that we would certainly go to a slant-and-go."

"When we made the adjustment, like we speculated, the corner was super aggressive. He jumped on the route, and when Stevie broke back out of it, I couldn’t believe how wide open he was. Stevie actually stumbled because, when he did the slant, the corner was so aggressive that he ran into Stevie, and he was doing the ‘go’ part. 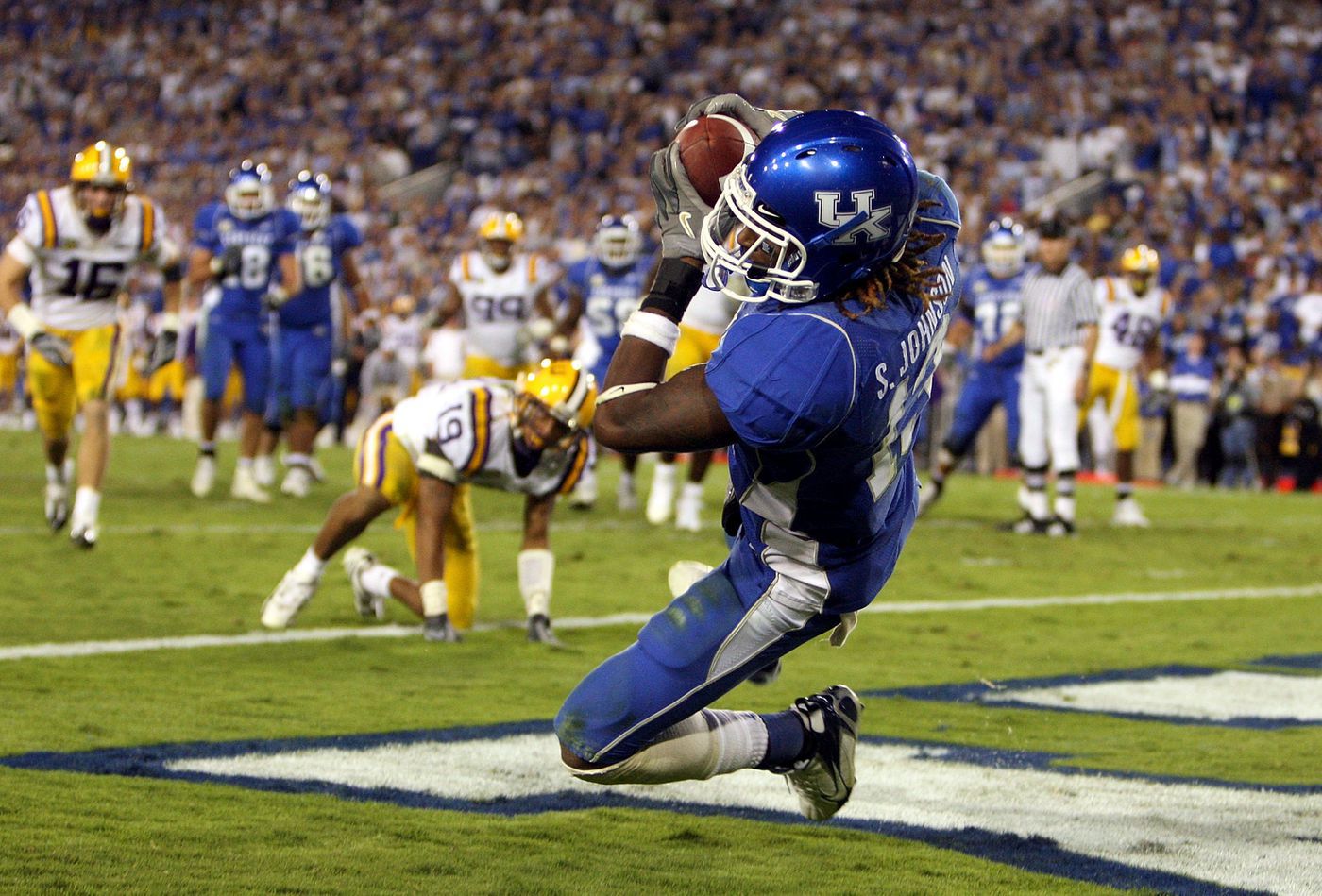 "Andre didn’t see the completion. He just heard the cheering."

Brooks thought LSU was going to run the ball in response.

Kentucky read the calls perfectly and got the fourth-down stop to seal seemingly impossible victory.

"The Kentucky game was upsetting," And The Valley Shook’s Billy Gomila said. "A lot of people forget that Colt David came pretty darned close to making a long, game-winning field goal before it even got to overtime. But it was easy to chalk it up to a rough spot on the road, and every goal was still out in front of the Tigers."

"I was trying to get over to shake Les Miles’ hand, and the place was going bonkers," Brooks said. "People were running everywhere, and his security people escorted him on through, and I never did get to him. Students and people were flying around, tearing up turf, and everything."

"As I was leaving the press conference, somebody came in and said, ‘Les Miles would like to talk to you.’ So he came over afterwards, when all the chaos was over, to congratulate me. Class act by him."

"I remember the fans chanting, ‘we believe,’ from end zone to end zone," Woodson said. "And that’s the first time that we had ever heard that chant. So I recall everyone on the sideline having goosebumps, because you could just feel it. You could feel the tension from historically not winning those types of games.

"But this season was just different. There was just something different about the season."

The Wildcats would finish 8-5, winning a really weird bowl, meaning their first postseason win streak since 1951. 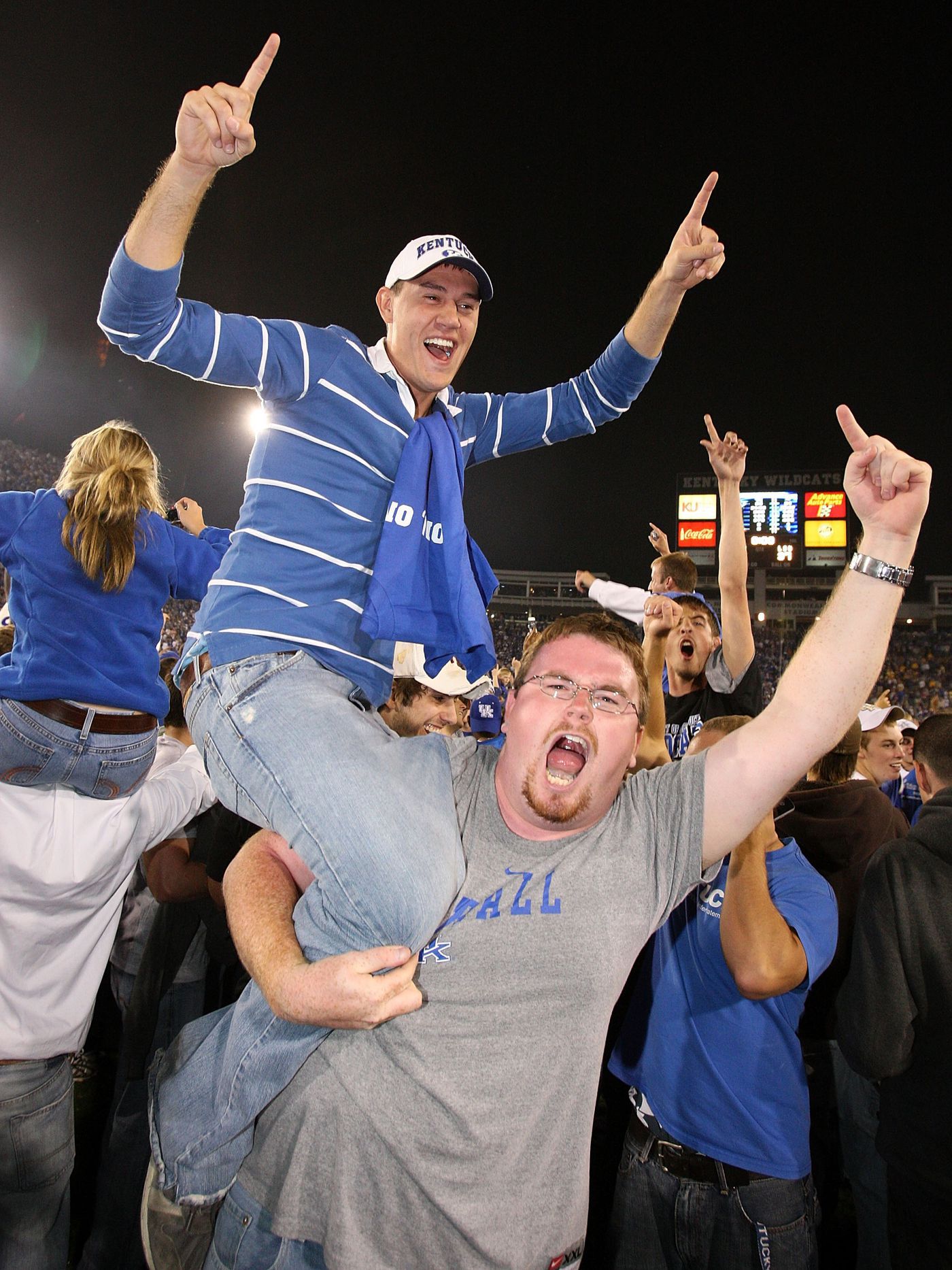 "It's hard to describe the feeling of panic that overcame you when Arkansas lined up in the Wildcat set with McFadden and Felix Jones," Gomila said.

"I felt like, their eyes, [LSU] would have some violation with their eyes, and they would slow down," Nutt said. "When you have Felix Jones coming across in fast, lightning motion, it slows them down. And then they had to respect that. And then they had to respect the fact that [McFadden] could hand it, he could throw it to Marcus Monk or Peyton Hillis, or he could run it."

"‘Put him in the Heisman!’" Arkansas Fight manager Doc Harper said of McFadden. "I remember just wishing they'd snap the ball directly to him on every play. He actually fumbled once or twice early on kickoff returns, and we all thought that was a bad omen, but things obviously turned around.

"The play I remember most is the long touchdown run relatively early on when our quarterback, Casey Dick, ran with him downfield and made a big block to free McFadden for the touchdown."

"By the end of the game, all three of Arkansas' running backs were just terrorizing LSU," said Harper.

"Arkansas was always scary during this stretch because McFadden was just that damn good," Gomila said. "Until Leonard Fournette, he was the best tailback I'd ever watched live and in person. Especially with Felix Jones, his 180 yards in the 2006 matchup had single-handedly kept the Razorbacks in the game."

Tiger QB Matt Flynn led a touchdown drive to send it into overtime.

"Anytime we got to overtime, we feel like we’re going to win. We played so many overtime games, we got a lot of confidence in that. " Nutt said. "We felt like we took the crowd — you could sense they weren’t quite as loud as they were in the start of the fourth quarter, and it's because of the confidence we had in overtime."

Tied at 42, Arkansas was supposed to go second in the third overtime. Teams typically prefer to go second, to see how many points they’ll need to survive the period.

But Nutt took a huge gamble.

"Nutt chose to take the ball first because of how worn down LSU's defense was," Harper said. "I remember freaking out, wondering why Arkansas wasn't playing defense, but it was a rare great move on Nutt's part."

"I felt like we were in a rhythm and sometimes when you're in that rhythm, I wanted to just keep it going," Nutt said. "Sometimes when you score first, especially in somebody else’s backyard, it puts a lot of pressure on you.

"I felt like when we got them on their heels a little bit."

The Hogs scored a touchdown and the two-point conversion. LSU countered with a touchdown, but still needed the two-pointer. Flynn’s attempt was intercepted by Arkansas’ Matterral Richardson.

"He’d gotten beat on the slant during the game," Nutt said. "I remember our defensive coaches were talking to him in between series about, especially inside the goal line, ‘You know the slant’s coming. They think they’re going to throw it.’ So, I didn’t know they were going to throw it on that two-point play, but to see him break, his eyes were perfect. The break in front of that ball and interception was a great, great feeling boy. Woo!"

McFadden was the star, finishing with 206 yards rushing and three touchdowns, along with his passing touchdown. Nutt made the case for McFadden’s Heisman candidacy in the postgame interview.

McFadden finished second in Heisman voting, but Nutt wasn’t around to enjoy it.

Amid a storm of discontent that’d been growing since the offseason and that would reverberate into 2017, he’d left Arkansas for Ole Miss, three days after taking the Golden Boot rivalry trophy from the country’s No. 1 team.

And for a while, it seemed like both head coaches would be moving on.

"Keep in mind, by this point most people also believed that Michigan would come calling for Les Miles," Gomila said. "So the Tigers not only blew a chance at a national championship, but were about to have to go out and find a new head coach. Even with the SEC Championship Game already clinched, it just felt ... hollow."

"I like to talk about what we are and not what we lost," Miles said the Monday after the loss, via the Associated Press. "I look at a team that hasn't lost a game in regulation. There has not been a team that has beaten us in 60 minutes."

"I'm a pretty optimistic guy," Miles continued. "I don't do too much figuring out [which teams have to lose]. I only work on what I can control. We still have an opportunity, but it may not be the kind of odds I'd bet my house on."

At that point, LSU fans were down to hoping that:

They got all four wishes.