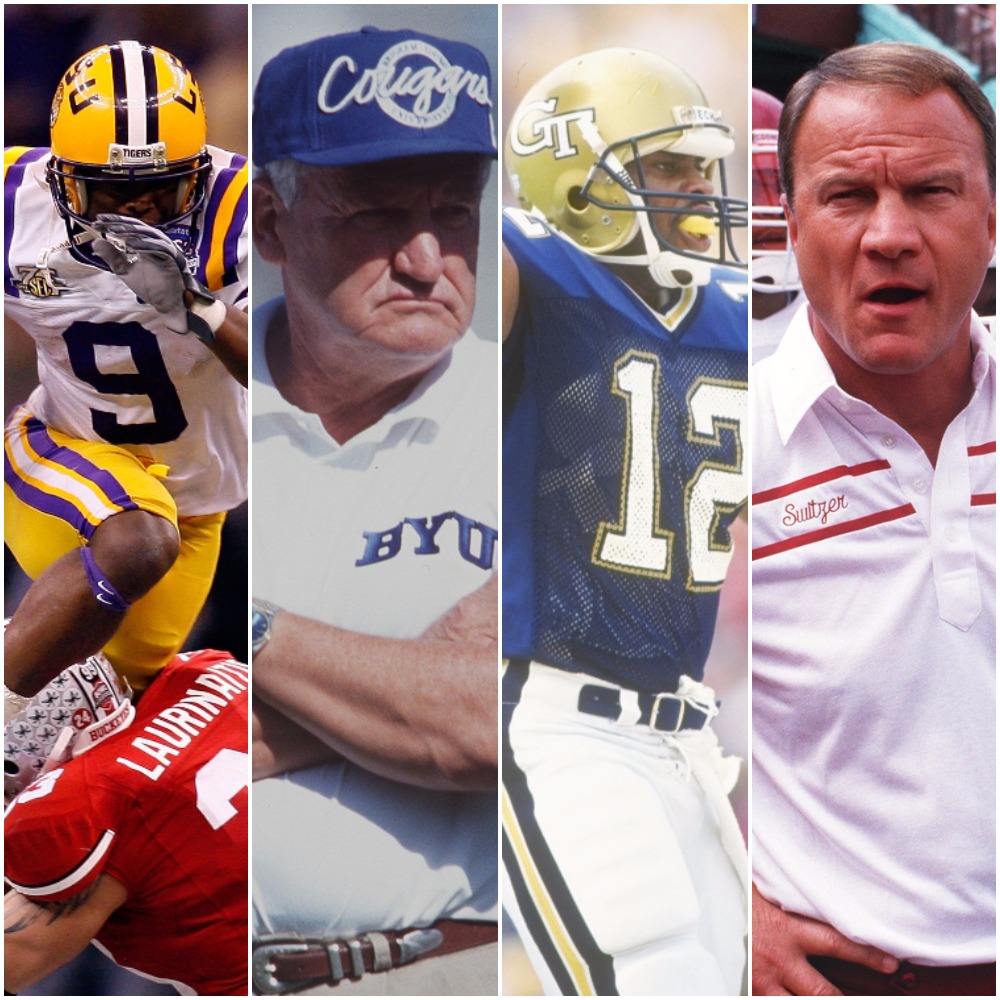 College football’s ruling class produces most of the awesome teams in any year, and if you aren’t a blue blood, you’re going to find it difficult. This is frustrating, but it makes it all the more thrilling when the sport veers off course.

Sometimes a batch of coaching hires flips things around. Sometimes an offensive innovation gives also-rans an edge. Sometimes the sport loses its damn mind. All those happened in 2007, but especially the last part.

In addition to 2007, here are 10 other seasons in which this beloved sport completely lost the plot.

From 1902-13, Chicago, Michigan, and Yale combined to average 2.8 losses per year. A few came against each other.

In 1914, each lost at least twice, and only one (two-loss Yale) ranked in the SRS top six.

Illinois and Texas went unbeaten, and the center of the universe might have been Colorado, where both CU and Colorado School of Mines dominated.

Chicago, Michigan, and Yale were still good, as was Minnesota, another power. Plus, Texas and Illinois had both been solid for a few years.

The first year with an AP Poll featured 12 different teams making top-five appearances, which would prove to be a pretty high number.

Most teams only played opponents within their regions. Fourteen of the final top 20 had either zero or one loss, so a lot of the fluctuation was just: "Who won by a bigger margin this week?"

The national champion, Oklahoma, had averaged only five wins over the previous six years. Then, poof, a title.

Sixteen teams made top-five appearances, and 23 showed up in the top 10 at some point, each the fourth-most of all time.

And two of the preseason top four (Alabama, Wisconsin) finished outside of the top 20.

Florida State and Miami started in the top five and stayed there most of the year.

And of the preseason top 10, only Alabama and Wisconsin finished below 20th.

There were lots of matchups of ranked teams, which meant rankings adjustments, but CHAOS was at a minimum.

A rash of coaching retirements had shaken up the balance of power, and by the late-1950s, top fives consisted of one or two SEC teams, one or two Big Ten teams, a squad with military ties (Army, Navy, Texas A&M), and Oklahoma.

In 1959, things got weird. Three SEC teams fielded their best squads of the decade (Ole Miss, LSU, and Georgia), Syracuse exploded, the Big Ten elites imploded, and OU lost more than once for the second time since 1947.

LSU, Ole Miss, and Texas were not new to elite football.

And Syracuse’s greatness removed drama. When No. 1 is barely challenged after the first week in November, you only grade out so high on the Chaos Meter.

Nebraska hogged headlines, and it seemed the Cornhuskers were going to run away with the title. But when they fell to Miami in the Orange Bowl, the veil was lifted on a crazy season.

This was a wow-in-hindsight season. There were only two No. 1s all year: Nebraska and, in the last poll, Miami. If you don’t notice the chaos until after the fact, how much chaos can you claim?

In 1942, Ohio State won the national title, with Georgia and Wisconsin next in the final rankings.

Notre Dame was awesome and rolled to the title.

It’s almost cheating to include a war-time season. Football was upheaved by enlistments. The final AP Poll included five military teams, led by No. 2 Iowa Pre-Flight. This was maybe the most unique year, but you can explain it easily.

In the 1960s, nations and parties experimented with socialism and Communism. So did the Big Ten.

With Woody Hayes’ Ohio State struggling in recruiting and Michigan battling inconsistency, everybody got a shot.

It was fun, not chaos. Notre Dame and Alabama met high expectations, and while ‘67 had Wyoming and Oregon State in the year-end top seven, national champ USC tamped down the crazy.

Only three seasons had five different No. 1 teams each. This was one.

You get a deduction when your preseason No. 1 wins the title. Plus, a lot of the wild movement happened early in the year.

1984 featured six No. 1 teams and 25 top-10 teams, each the most ever. Greatness was a hot potato, with preseason No. 1 Auburn falling to Miami in the Kickoff Classic, No. 1 Miami losing at Michigan two weeks later, No. 1 Nebraska falling at unranked Syracuse in late-September, and No. 1 Texas tying Oklahoma (and then losing at home to unranked Houston).

After one of the zaniest opening months ever, Washington emerged, then lost at No. 14 USC. That pushed Nebraska back up, but the Huskers lost at home to Oklahoma. No. 2 South Carolina lost by 17 at unranked Navy.

Given no other choice, voters placed unbeaten BYU, which had one win over a ranked team (preseason No. 3 Pitt, which had plummeted to 3-7-1), at No. 1.

No. 2 Oklahoma might have stolen the title after BYU's Holiday Bowl win over 6-5 Michigan, but the Sooners fell to Washington in the Orange Bowl, in part because of an incident with a schooner.

Yeah, that was a weird damn year. And I didn’t even mention Doug Flutie.

One of the few seasons that competes. You had two-loss Nebraska finishing fourth, Boston College and Oklahoma State posting top-10 finishes, and BYU not only winning a title, but winning a title with Robbie Bosco. Not Jim McMahon, Steve Young, or Ty Detmer. Bosco.

The things that put 2007 ahead are the massive upsets and new names. There was no Appalachian State-Michigan or Stanford-USC in ‘84, and while 1990 included an AP No. 1 (Virginia) that hadn’t been top-10 since the ‘50s, all of 1984’s No. 1s had been contenders in recent years.

1990 brought the ruckus from the opening kickoff. Preseason No. 1 and defending champion Miami not only began at BYU, the Hurricanes began by losing to BYU. Notre Dame moved to No. 1, then lost at home to unranked Stanford. Michigan moved to No. 1 and lost to Michigan State.

George Welsh's Virginia, ranked in the preseason for the first time, coming off of its first-ever 10-win season, and hosting its first-ever game as the top-ranked team, lost an all-time classic.

1990 was just revving up. Notre Dame moved back to No. 1 but lost at home to Penn State. Despite two blemishes (a loss to Illinois and a tie against Tennessee) and one of the most controversial wins ever — needing a fifth down to beat Missouri — Bill McCartney's Colorado Buffaloes moved to No. 1.

Preseason-unranked Georgia Tech finished 11-0-1. And when Notre Dame star Rocket Ismail's last-minute punt return against CU was wiped out by of a clip, the Buffaloes and Yellow Jackets split the title.

In all, 18 different teams made top-five appearances, the most ever, and that included Houston and Illinois.

The oddity was memorialized by the split title and Fifth Down. You can hide 2007’s weirdness with "National champion: LSU," if you ignore the Tigers’ number of losses. Oklahoma’s 1985 ring deceives. But there’s nothing deceiving about 1990. It laid its weirdness out for the world to see.

1990 had two teams visit the top five after not entering the top 10 in the previous 10 seasons: Georgia Tech and Virginia.

1990 didn’t have any top-10 visitors that hadn’t been ranked at all in five years.

But the main thing was legitimacy. 2007 ended with a single game (that was itself weird), tying together threads and leaving nobody but college football to blame for the chaos.

1990’s controversies — if the Fifth Down is called correctly, if replay review confirms there’s no damn way Charles Johnson got the ball across the line before he landed on his back, or if Ismail isn’t called back, then Georgia Tech is your champ — made 1990 slightly less exhilarating and slightly more frustrating. Unless you’re a Colorado fan.