Remember Oregon before Chip Kelly? That's why CFB needs him back 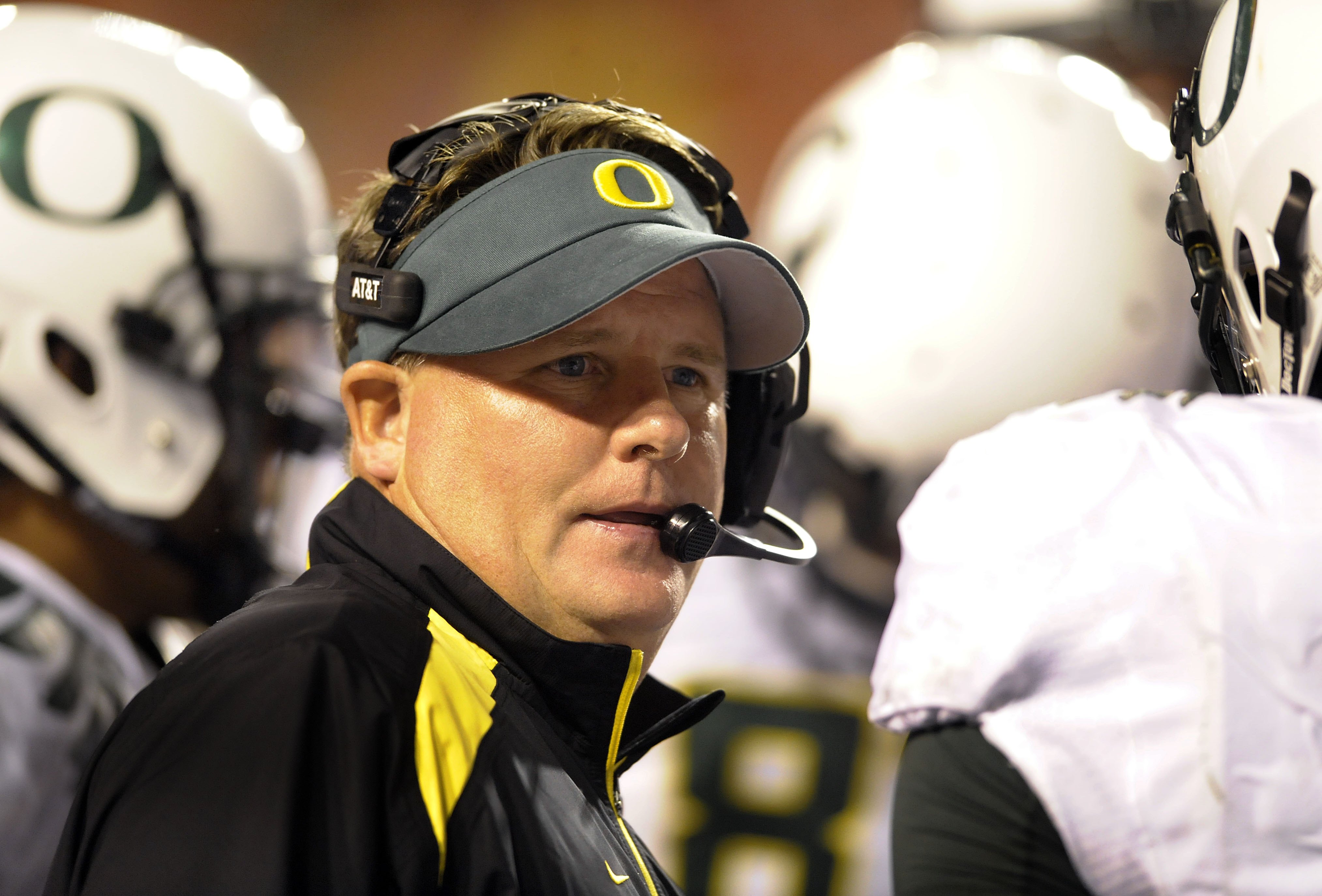 Do you remember life back before Oregon started heaving up 45 points a game? Before the Ducks became the coolest program in the country?

Oregon had had stars on offense, including first-round QBs Joey Harrington and Akili Smith and some ancient Heisman contenders, but its identity was nothing like what it’d rapidly become.

Along with Phil Knight’s Nike influence and a decades-long chain of coaching stability, the biggest key was head coach Mike Bellotti turning the offense and eventually the program over to some dude from New Hampshire in 2007.

If Nick Saban is a dictator, Rex Ryan a goofball and Bill Belichick is a genius, then Chip Kelly is a mad scientist, the man who devised football’s best offense at a hockey school.

But he likely doesn’t think about it like that. He simply knew how good he had it at UNH. In a profession that offers few chances to cash in, that is rare.

"He turned down jobs because he wasn’t going to get that, what’s the word?" Sean McDonnell, Kelly’s head coach at UNH, says. "Autonomy."

Finally, Kelly relented. In January 2007, Oregon offensive coordinator Gary Crowton, a former UNH assistant whom Kelly had flown out to visit the year before, left for LSU. With a vacancy to fill, Bellotti, who’d made stops at Cal State Hayward and Chico State, pushed for Kelly. At one point, McDonnell says, Kelly asked Bellotti why he’d hire a I-AA assistant.

"Well," Bellotti supposedly responded, "they hired me, and I was a Division II assistant coach."

Oregon didn’t just rack up yards. The Ducks’ signature, seemingly every other week for years: a leisurely first half as Kelly probed for weaknesses, then an Oregon touchdown, a turnover as the panicked opponent tried to catch back up, another touchdown, and an Oregon defensive touchdown, all in a flurry. Every week, the dam held until it didn’t. It was beautiful.

Bellotti and company explained the program-changing decision to bring in Chip:

Bellotti: Gary Crowton had coached with him and would come into my office and say, "Look what Chip's doing at New Hampshire," and we would steal plays.

We had a team pledge, but it was too wordy, so "Win the Day" became the phrase to encapsulate all of it.

Oregon OL Geoff Schwartz: It changed the program — the clearing of the air, coming up with "Win the Day."

Bellotti: I think Chip was the actual one who voiced those words.

Oregon S Patrick Chung: We just made a commitment to win games and finish, not like the year before.

Bellotti: One of the reasons I wanted to hire Chip is he had a familiarity with a no-huddle system. I asked my staff if they wanted to go no-huddle. Unequivocally, they all said, "No."

In a 20-minute practice period, we used to run about 20 plays. The first time we ran a drill no-huddle in the spring, we ran 42. Some of our managers now had to get their ankles taped because they had to run to place the ball. They were getting sprains and pulling muscles trying to go as fast as they possibly could.

Throughout, the uniforms thing reached its glorious peak. (Everyone got pretty tired of it by 2016 or so, around the time the last of Kelly’s coaching staff washed out.)

Kelly’s NFL career didn’t work. His innovation stalled there, and it’s unclear how ahead of the college game he is at this point, considering Saban’s 2016 offense looked a lot like Oregon’s.

But still. Kelly helped turn Oregon into the funnest team in the world’s funnest sport, and for that, we miss him. Please come home to a college football sideline, Chip.