The LSU-Florida rivalry caught fire a decade ago, not a year ago 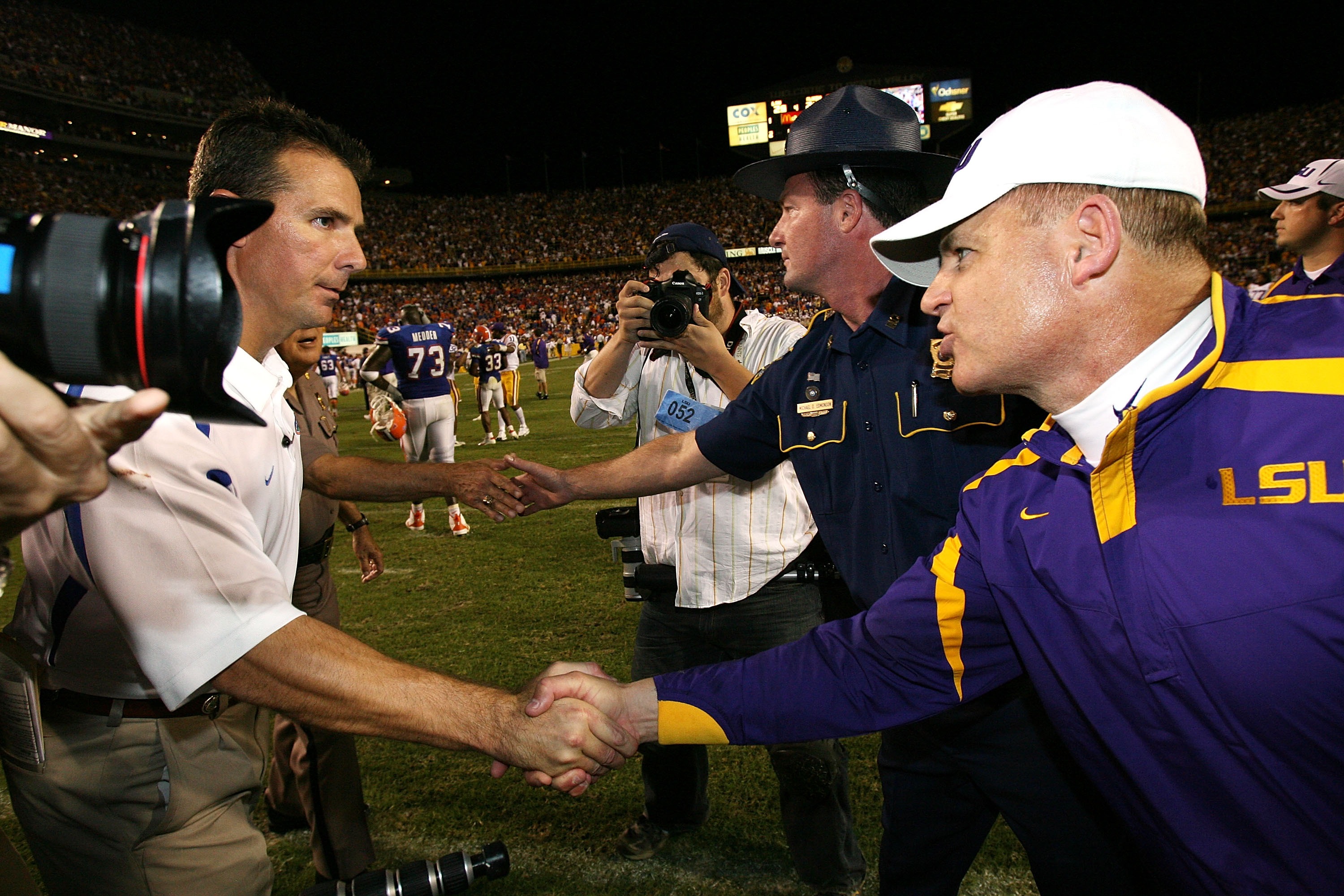 In the eyes of many, the LSU-Florida rivalry has finally found some intensity.

In October 2016, their game was postponed due to the impending threat of Hurricane Matthew. Then came weeks of public, ugly, back-and-forth, open feuding between the programs, and Florida being accused by media members of "being scared" to play LSU. Finally, the game was rescheduled to Nov. 19 at LSU, with 2017 moving to Gainesville in return.

The Gators defeated the Tigers, 16-10, with a goal-line stand. Florida has since scheduled LSU as its Homecoming game, and the Oct. 7 matchup is circled on every Florida and LSU fan’s calendar.

But the thing is, this rivalry has had huge moments and bitter emotion for years.

2006 marks the last time Florida scheduled LSU as its Homecoming game. The spread for the top-10 battle was dead even, so this was far from the cupcake opponent most schools schedule for homecoming.

Senior quarterback Chris Leak was the starter during Urban Meyer’s Year 2, but the Gators had a unique weapon in true freshman quarterback Tim Tebow.

In 2006, Tebow was used mostly as a situational runner on short yardage and goal-line downs, but he did throw five touchdowns. His first career TD pass was on this jump pass to tight end Tate Casey, a throwback play from the 1990s.

"In practice, when we were running it with our defense," Tebow told SB Nation via phone interview, "I just actually caught the ball, ran it to the line of scrimmage, jumped up, and all the linebackers went up, and Tate was open, so Coach was kind of like, ‘Well, that might actually work!’"

"We'd rather our tight end not fumble around and fall down and do six push-ups and then get up and try to catch it," Meyer said, via the Associated Press after the game. "He's supposed to block-release and catch the ball, and he didn't. He kind of stumbled about. It's supposed to be much easier than that."

"They snap me the ball, and I see Tate get grabbed right off the line of scrimmage," Tebow told SB Nation. "So I get to the line of scrimmage, and I jump and I try to buy a little time, and you can see me kind of double clutch it. Finally he gets off the jam, and I kind of give it a lot of air and throw it in the back of the end zone, and he’s able to make a good play."

"You had to laugh a little bit," said Billy Gomila of LSU blog And the Valley Shook! "To that point, Tebow had been exclusively a runner, just smashing into the end zone on quarterback dives and power plays, something Meyer's Gators really couldn't do without him. But in my mind, I kept thinking, ‘Yeah, one of these weeks, he's gonna come out and throw and man, that defense is going to be embarrassed.’"

UF went on to upset Ohio State in the BCS Championship. 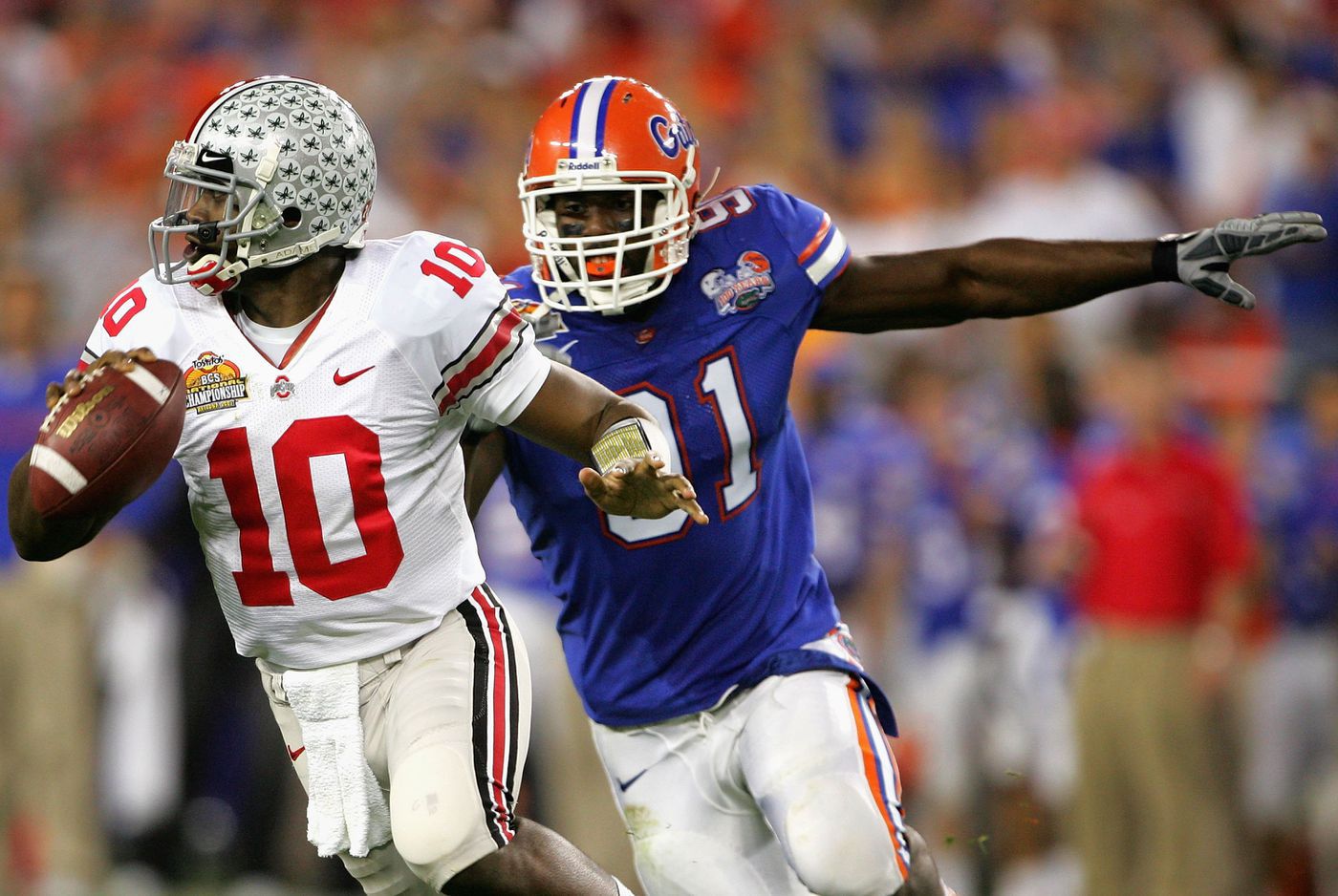 LSU, an eight-point favorite, entered undefeated. Florida had suffered only a last-second loss to Auburn the week before.

The week leading up to the game, things got heated, as LSU fans found a way to bombard Tebow’s cell phone.

"Honestly, it just put a little fuel to the fire," Tebow recalled. "All the death threats towards my family and friends and stuff was a little much, but honestly it was just fuel to the fire and I was just so focused."

The calls started on Tuesday before the game, and Tebow eventually turned off the phone. According to the Associated Press, he had to listen to each text and voicemail before deleting it.

So when the Gators took a 10-0 lead off a Tebow touchdown pass to running back Kestahn Moore, the QB celebrated by taunting LSU fans with a cell phone gesture:

"It was not planned at all," Tebow said. "When I got to the end zone and I looked up right in front of the student section, and there were like 30,000 people giving me the bird, it was just instinct. Most of them had probably been calling me earlier that week, so it was just a little friendly reminder, saying hey."

"This was the first time the whole ‘opposing player's cell number leaks out over social media’ was a thing, and yeah, it was funny in that kind of harmless way," Gomila said. "I think you could call it very college football. For me personally, when he scored that first touchdown and taunted the student section with it, it was kind of like, OK, game on.

Florida was up 24-14 at the start of the fourth quarter.

But LSU head coach Les Miles and his Tigers didn’t go away.

Miles’ Tigers attempted five fourth-down conversions, succeeding on all five, including two during their game-winning drive.

"People remember them as these ballsy, crazy calls, but in the moment, it very much felt like something Miles had to do to win those games," Gomila said. "Punt the ball, and Florida puts the game away. But that final one, inside the 10-yard line? With a much shorter, makeable field goal there? That call took guts."

And then Jacob Hester finished one of 2007’s biggest plays:

"What an unbelievable game that was," Tebow, that season’s Heisman winner, said. "Back and forth, and their five fourth downs. Even though we weren’t able to pull that one out, it’s still a memorable game just because of the environment, how competitive it was, how many great players were on the field that night. That was a very, very fun night to play football."

And the Valley Shook!:

It remains the single greatest football game I have ever seen in person. Nothing before it had ever featured the same sustained emotional roller coaster. Maybe the 2012 Alabama game has come close since, but given the stakes and the magical season that LSU would propel itself through to the BCS national title, it stands the test of time as the single greatest game of the Les Miles Era at LSU.

LSU went on to upset Ohio State in the BCS Championship.

And Florida’s head coach was right there as LSU players chanted the SEC’s name.

The phone thing became a Florida-LSU rivalry tradition, of sorts.

Two years later, when there was a chance Tebow might not play due to a concussion, LSU fans harassed backup quarterback John Brantley via phone.

"They’ve left a bunch of them," Brantley said via the Gainesville Sun. "There haven’t been any death threats or anything. I just ignore them."

They had wide receiver Riley Cooper’s number, too.

"They didn't get me. It's pretty bad. They had my boy, Coop," Florida cornerback Joe Haden said via USA Today. "They got him pretty good. I was chilling with Coop, and he was just laughing about it."

Since the scheduling drama of 2016, the chippiness hasn’t exactly stopped.

After UF’s win in the relocated game, the Gators stole a NSFW Baton Rouge musical staple.

This summer, Florida defeated LSU in the College World Series, adding some crossover appeal to the rivalry.

And after LSU moved its spring scrimmage inside due to lightning, this comment from Florida was a reminder of how tense things have gotten: 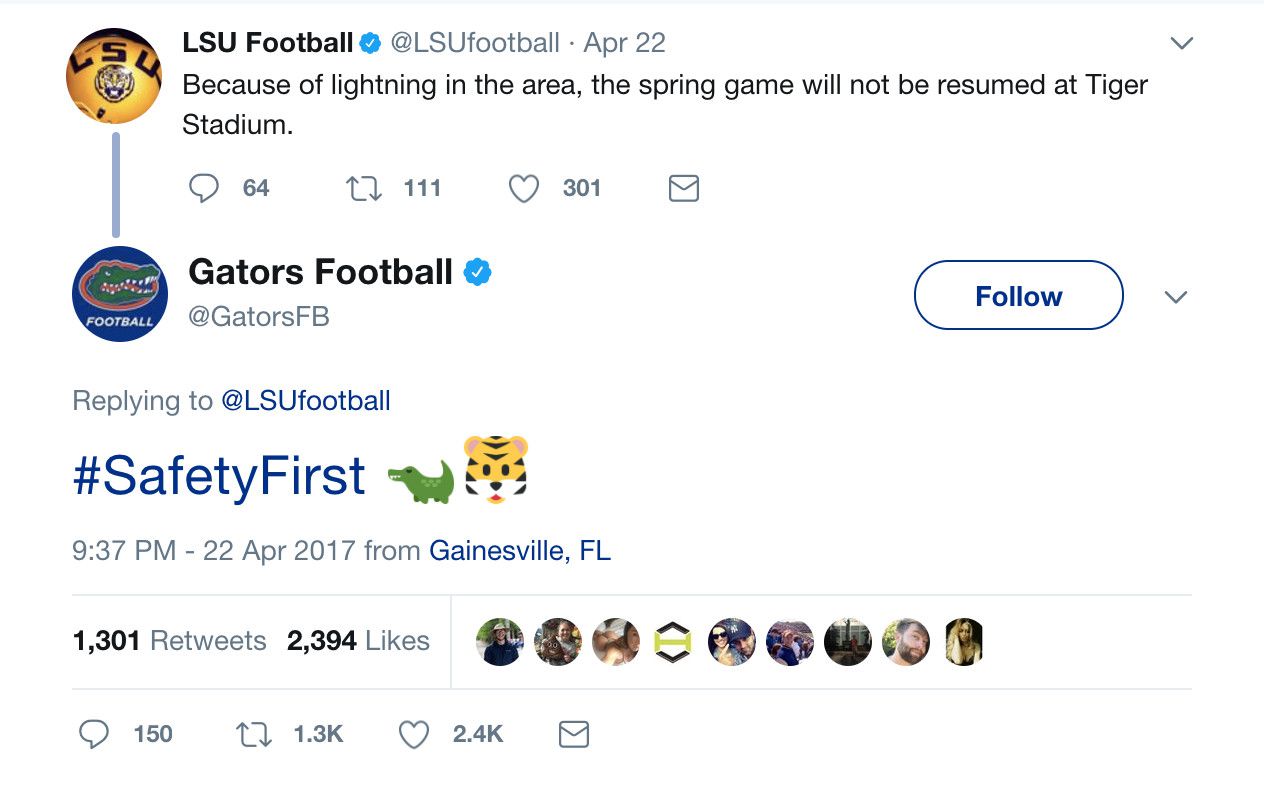