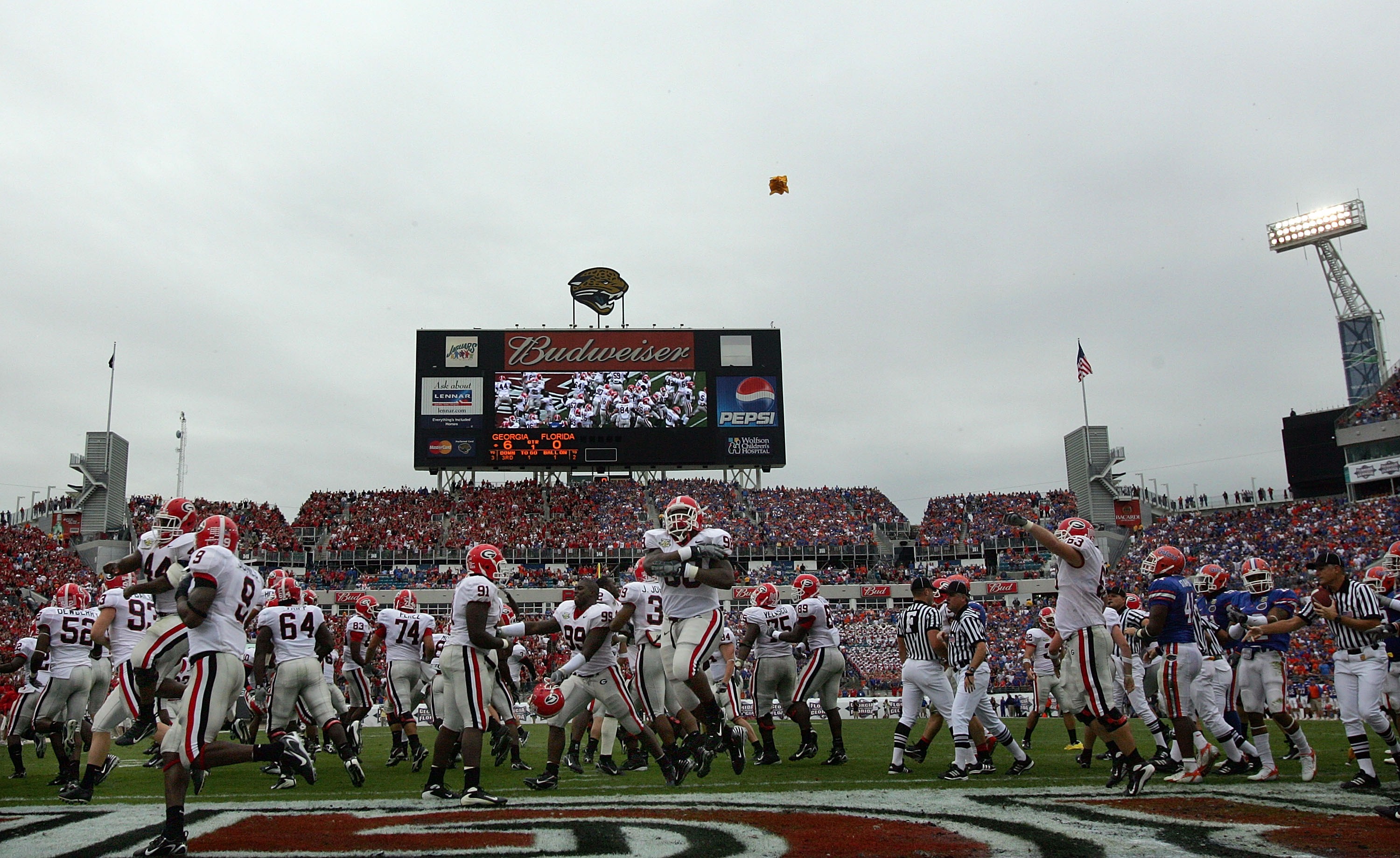 There is one clip from one game during one season that always infuriated me like no other. It happened early in Florida’s 2007 loss to Georgia. Running back Knowshon Moreno breaks the plane to score, and then the whole team comes out to celebrate.

The rivalry had a certain truism at this point: Florida was probably going to beat Georgia in the World’s Largest Outdoor Cocktail Party.

This wasn’t the 1980s-era Cocktail Party, when Georgia would routinely break orange and blue hearts. Steve Spurrier began a run of dominance that even Ron Zook couldn’t screw up. From 1990 to 2006, Florida went 15-2 against the Dawgs, including a 52-17 romp in Athens while the Gator Bowl was undergoing renovations in Jacksonville.

Georgia rode that wave of emotion as a 7.5-point underdog (per Odds Shark) to a 42-30 win. Moreno went wild, to the tune of 188 yards and three touchdowns. It was the first score that ignited things, but it almost backfired because the play was reviewed to make sure Moreno scored.

Typically stoic Georgia head coach Mark Richt, of all people, had ordered the celebration to rev his team up.

"On the day of the game I re-emphasized to the team that this was not going to be an individual celebration, but a team celebration," Richt wrote. "Again, I was expecting the 11 players on the field to be doing the celebrating, not for the bench to clear as it did."

Richt would apologize and acknowledge that everyone involved avoided a big altercation.

But either way, it is still an incredible visual.

As is the ensuing kickoff, backed up by penalties. 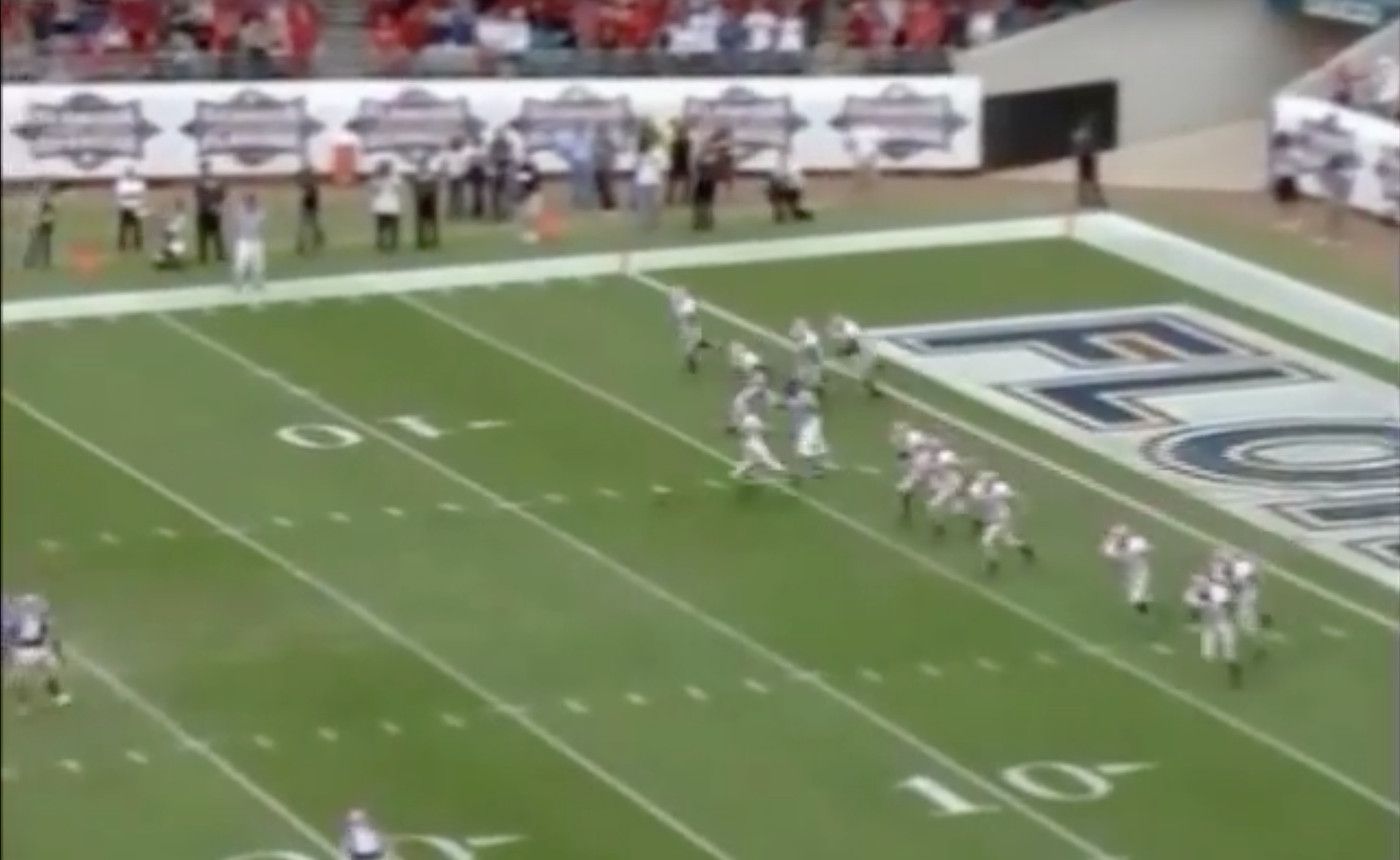 But there was to be retaliation, because Meyer does not play around when it comes to rivalry.

Meyer’s yet to lose to Michigan since he’s arrived at Ohio State, and was 4-0 against Utah State and BYU while at Utah. Going back to the start of his head coaching career, at Bowling Green, Meyer was 6-2 against schools in Ohio.

When it was over in Gainesville, he finished 16-2 against Florida’s main foes (Tennessee, Georgia, and Florida State). At the time of The Celebration, he was undefeated against Florida’s rivals and had only lost one other time in the state of Florida.

You’ve got to understand how truly petty Meyer’s rivalries get. This is the guy who, while coach of the Utes, reportedly put BYU urinal cakes in his team’s bathroom. This is the guy who refused to use the names of his rivals even before getting to Columbus.

Embracing the Falcons' in-town rivalry with Toledo, Meyer made the most of the battle for the Peace Pipe Trophy, referring to the Rockets as "That (Other) School Up North." Meyer brought that same attitude to Utah's rivalry with Utah State ("That Team Down South"), and to Gainesville, where Florida lays claim to three primary foes.

And this is the guy who publicly apologizes when he actually does say a rival’s name.

"Did I really?" Meyer said, looking stricken, after being told of his faux pas. "Wow. I apologize."

The man is passionately petty, and it’s an admirable trait.

With less than a minute to go and the result purely academic, CBS’ Gary Danielson said the obvious as Florida came up with a modest gain and the clock kept ticking.

"Well, last play of the game coming up."

A natural reaction with 44 seconds left. But then Florida called a timeout. The broadcast cut to commercial and returned. The Gators ran another clock-bleeding play with Emmanuel Moody, and then Meyer called another timeout. Danielson wised up to what was going on.

"Here’s the response from Urban Meyer to last year. Taking another timeout to get as much as he can out of this football game. He said, ‘I’ll have a response.’ His response: 49-10, and I’m calling every timeout I got, and I’m gonna finish the game the way I want to."

"It definitely motivated us," UF QB Tim Tebow tells SB Nation, years later. "[2007] was a difficult night, not being able to pull out that win, the Florida-Georgia game being so big for me and my family. In my hometown -- that was my parents' first date, was that game -- having an injured shoulder and making it worse in that game was disappointing. That ride back to Gainesville was a tough one, and in 2008, we came ready to change things."

Immediately after the game, Meyer played coy, but wasn’t asked directly about the timeouts.

"We blocked and tackled very well. We played great defense. That’s how you win games, not celebrations or silly stuff."

In their postgame press conferences, both Richt and Meyer addressed the timeouts in their own way.

Meyer again played it straight: "Moody was running the ball really hard, and I wanted to get him a few more carries. I felt he'd earned that right."

Richt did the same.

Richt, who endured the worst loss in his eight seasons at Georgia, was clearly not amused.

"The rules say you can have three timeouts per half," he said. "He used them. That’s perfectly legal to do. There’s nothing wrong with that."

But although Meyer had not addressed the dance in the week before 2008’s game, he’d done so in an even more permanent medium: a biography published after the 2007 season.

[Dancing in the end zone] wasn't right. It was a bad deal. It will forever be in the mind of Urban Meyer and in the mind of our football team. We'll handle it, and it's going to be a big deal.

If you embarrass Meyer, not only will he have his revenge, he’ll make sure you suffer through it as long as possible, and he’ll telegraph it all beforehand in a story about his life. It’s a life and a career fueled by pettiness against his most bitter foes.