If you’re a Mainlander, you know Robert Kekaula as the man with the velvety island cadence voicing college football’s overnight shift. Rainbow Warriors games routinely kick off after midnight ET, after a full day of action.

Kekaula’s been the play-by-play man since 1992. But the man with three recorded Hawaiian music albums, a sweet bike ... 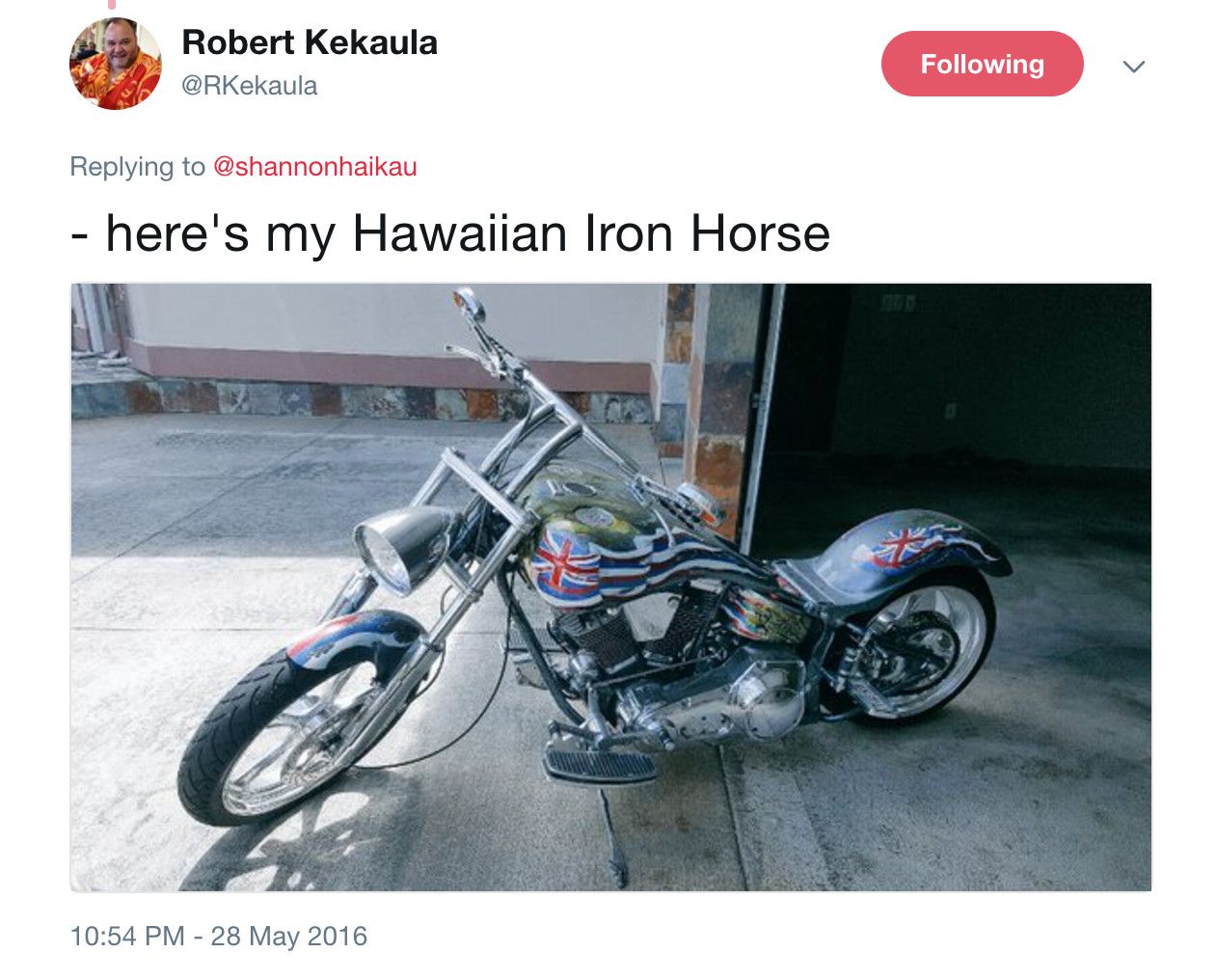 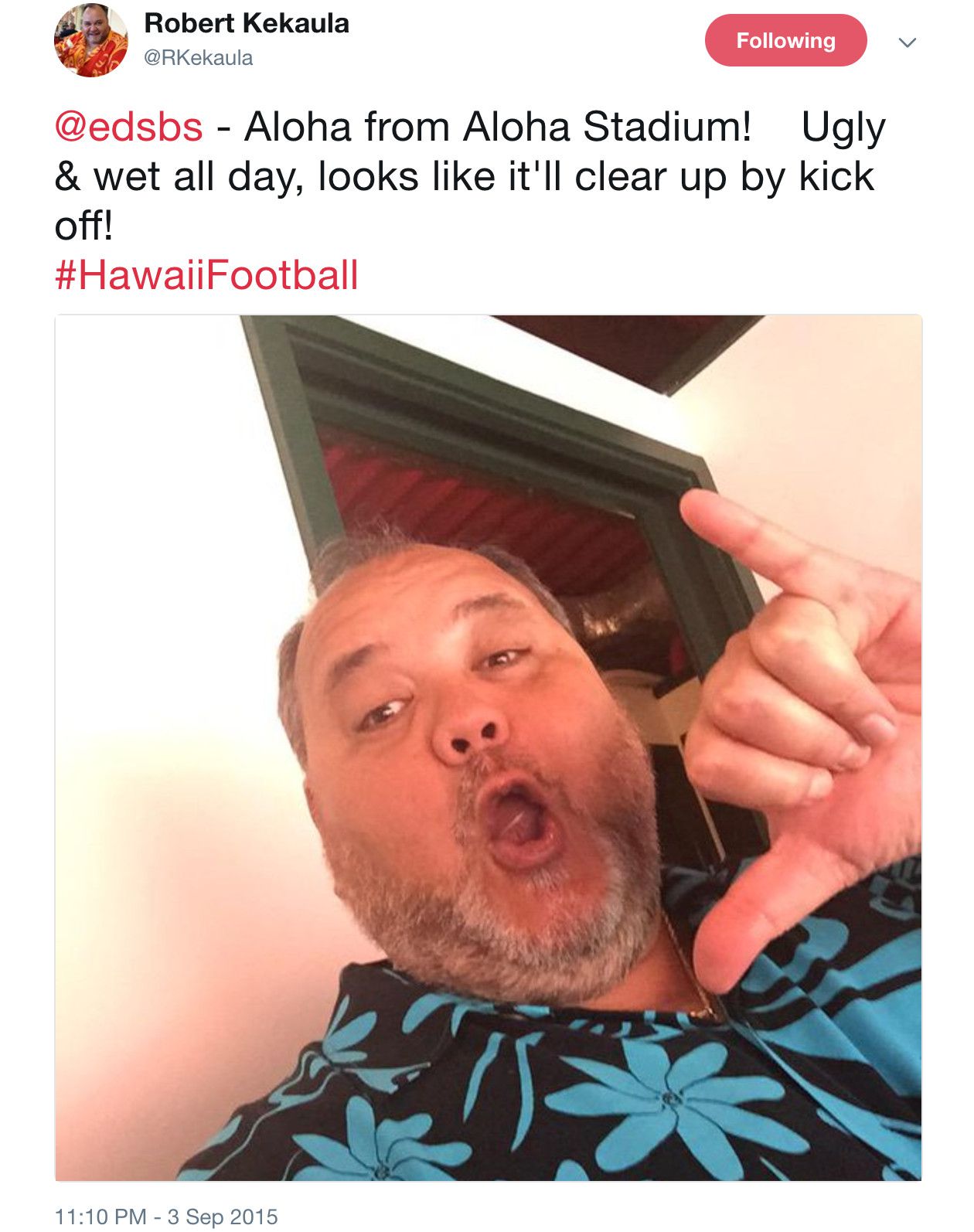 ... was just like the rest of us in 2007: along for the ride as the Rainbow Warriors (technically just the Warriors at the time, but Rainbow Warriors is so much better) marched through the WAC undefeated and into a BCS bowl. UH finished 12-1, one of FBS' only two teams with fewer than two losses, along with Kansas.

Hawaii’s most memorable team ever wasn’t even its best of the decade.

That’s the first thing he wants you to know.

The 2006 team went 11-3, finishing second in the WAC to Boise State, which would beat Oklahoma in the epic Fiesta Bowl. The Warriors lost to Alabama, Oregon State, and the Broncos by eight points or less.

They brought much of the team back for 2007, especially on defense and at quarterback. Colt Brennan had set an FBS season record with 58 TDs and threw for over 5,549 yards, which ranks fifth all-time.

Hawaii was picked to finish second in the WAC and ranked in both preseason polls for the first time ever. Besides Boise, the only land mine was Washington at the end of the regular season, and both games were at home.

"So they were anticipating — there was hype," Kekaula said. "Sky-high. Our own personal friends would call us, that live in states across the country, and say, ‘Are you guys on drugs?’ I’m hearing all this talk like, ‘What are you guys drinking?’"

He’d walked on at Colorado but was kicked off in 2004 after drunkenly entering a woman’s room uninvited. He was convicted of first-degree criminal trespassing and second-degree burglary. He went to jail for seven days and was on probation for four years.

He spent 2004 at a JUCO in California and arrived on the islands in 2005. Hawaii coaches discovered him while scouting another player, and June Jones made his new QB earn his scholarship.

"June jumped on a plane and some voodoo magic and Colt shows up here as a walk-on," Kekaula said. "And then played that first season not knowing a damn thing about the run-and-shoot. Didn’t have a clue. He was just making plays. It was like the NBA is to AND1 basketball. Colt was straight-up streetballing."

Starting 10 games in 2005, he broke or tied 11 school records. He was seemingly made for the run-and-shoot, an offense that asks quarterbacks and receivers to read coverages after the snap, making the defense wrong no matter what it does.

The system was so deadly because he was so accurate. His 70.3 percent completion mark while attempting over 500 passes is staggering. Typically, around 10 QBs throw that many passes in a season. That percentage ranked third that season and would be top-three in nearly every season since.

He threw only 38 TDs in 2007, struggling with head and ankle injuries, and was a Heisman finalist. His 131 career touchdowns were an NCAA record at the time.

He was a rock star on campus:

For a recent autograph session sponsored by the university, fans camped out overnight. Brennan would walk into class and see students waiting with bags of memorabilia for him to sign. Even his teammates often asked for autographs for friends and relatives.

"They had to hire security to pick him up on the practice field and get his butt to the locker room, because the team meal is right after practice," Kekaula said. "Colt would always miss the team meal ‘cause he’s on the field signing autographs taking pictures with kids and families. And he would miss food. So to get him in and out of practice, they hired a security van to drive him.

"And the craziest part is: the driver, they had to fire him, because every day Colt Brennan would jump in the van to hitch a ride, the guy would have 20 things with, ‘Hey, can you sign this for me?’

"Colt Brennan could have said, ‘I’m gonna go down to the ocean on Waikiki and walk on water back toward land, Michael Jackson moonwalking. And people, without seeing it, would spread news that he just did it."

Even with a QB on a gimpy wheel, the Warriors were elite on offense.

They were top-three in nearly every passing and total offense mark. They smashed a literal page-full of records. 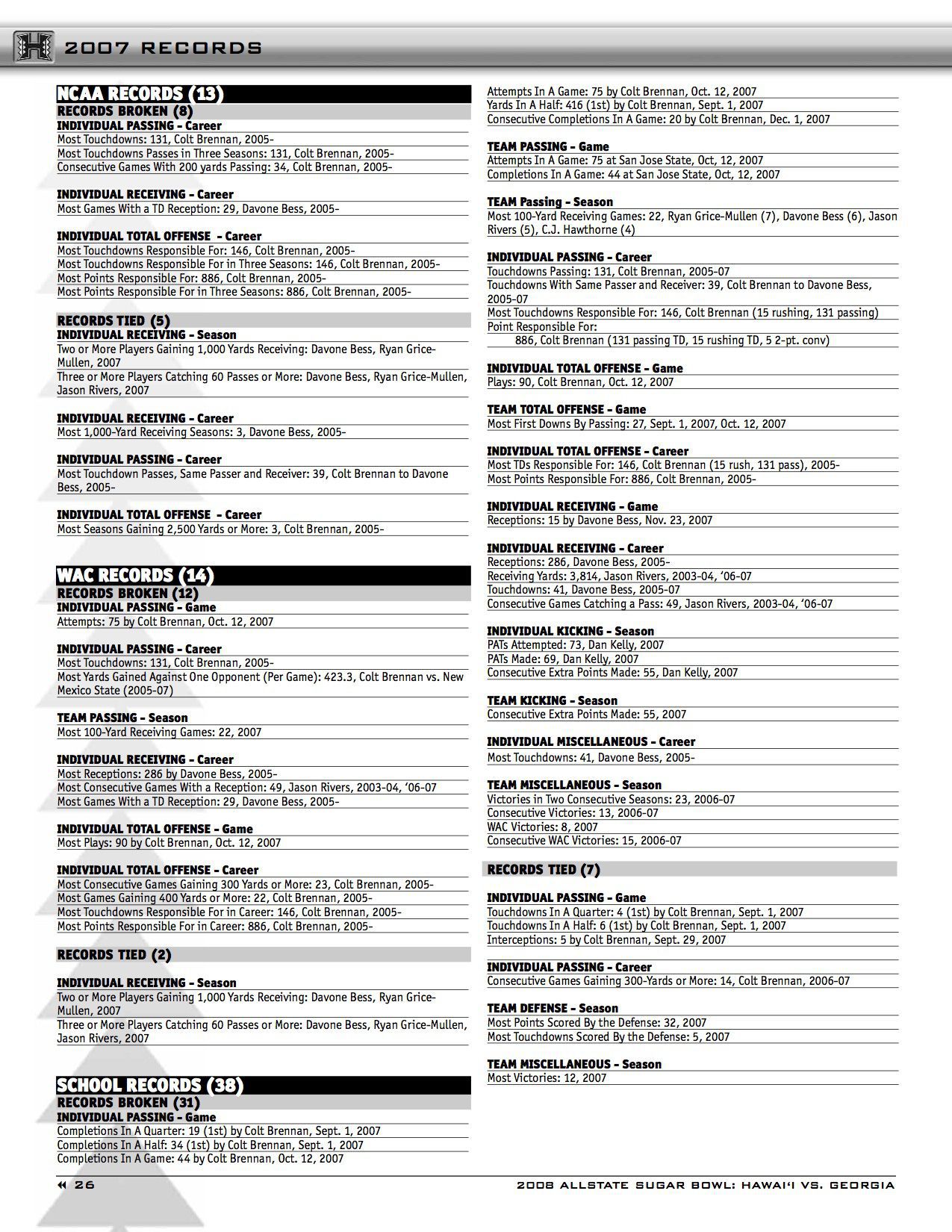 They blew out their share of opponents but had to survive in overtime against San Jose State and Louisiana Tech. They had wins over Nevada, Washington, and Boise State that were within a TD each. Against UW, the Warriors fell behind by 21 in the first quarter.

But at the end of the regular season, they were college football’s only undefeated team, ranked No. 10. Despite the record and Boise’s success, voters still saw the Warriors as a WAC team undeserving of a spot anywhere near the BCS title game.

"These kids handled the success, but to handle the success they had to have wanted it," Kekaula said. "And they wanted the success. That made it easier for them to handle it because they wanted it. They didn’t shy away from it. They’d tell anyone who’d listen, ‘We’ll beat ya. We don’t know how, but we’re gonna find a way.’"

Despite the good times, a storm was brewing.

Jones’ contract was up in the summer of 2008. The base pay was just over $800,000, and the school was on the hook for half, while boosters paid the other half. He wasn’t given an extension heading into 2007.

"There’s rumblings before the season starts. Because it’s the unwritten rule as the AD: You can’t let a coach walk into the final year of his contract if you want him," Kekaula said. "We’re not convinced the AD wanted him, despite the winning.

"June was big man on campus at the time, highest-paid state employee. And he’s winning. And the quarterback’s throwing for 5,000 yards, 50-plus touchdowns. The crowd’s back. They end the season with sold-out Aloha Stadium. Like Pro Bowl-size crowds. It’s a power struggle. And you let that guy walk into his final season of his contract? It’s craziness. I think June took it as an insult."

For many smaller programs, money isn’t an easy thing to come by. Hawaii has been particularly cash-strapped, so much so that when soap machines were damaged in the team’s showers, they weren’t replaced.

"Dana White couldn’t have written a better script, or the WWE," Kekaula said. "The athletic director, Herman Frazier, for some ungodly known reason, didn’t attempt to re-sign the coach and give him an extension going into the last year, and it backfired."

Before it backfired, there was a big bowl to play.

It was only the second bowl the school had ever played on the Mainland. Hawaii has long has a guarantee with the Hawaii Bowl, if it isn’t selected for a major bowl. But now the Warriors were headed to the big, bad SEC’s backyard.

This was the season after Boise State’s run to the Fiesta Bowl championship, and giant-killing was as en vogue as it can be for a sport that relies so much on heavyweights.

While the Bulldogs had a stupendous signal-caller of their own in future No. 1 pick Matthew Stafford, their 2007 was about running back Knowshon Moreno, first-team All-SEC as a freshman. The Dawgs had been this close to a title shot, mostly foiled once again by Steve Spurrier.

But there would be no giant-killing for Hawaii.

Georgia took a 7-0 lead on its first drive and got to 41-3 before a couple of garbage-time scores.

The Dawgs were better, and it showed. Their strength was clear on the defensive line, and they won the turnover battle. UGA pinned its ears back against an offense that was already pass-heavy, registering eight sacks and forcing six turnovers.

Brennan threw three picks and got benched late. He admitted his focus might not have been in the right place.

Within days of returning to Hawaii, the AD’s hesitance indeed backfired.

Brennan was a senior, and his exit was mandated. But days after the bowl, Jones became SMU’s head coach.

It so jarred the community that boosters mobilized to buy out the AD’s contract. The day after Jones left, Frazier was let go for multiple reasons, including being unable to retain Jones and not accepting the team’s full allotment for bowl tickets, creating a shortage.

Hawaii has been to three bowls since 2007, but the team bottomed out with a 1-11 2013 and a 3-10 2015. They seem on the upswing under head coach Nick Rolovich, another of Jones’ former record-breaking QBs at UH, but it will be tough to catch lightning in a bottle like 2007.

For a night, Hawaii reached a Mainland blueblood stage, and we’ll never forget it.

"It was fantasy land. It really was. And it was such a cool ride.