The Jim Harbaugh vs. Pete Carroll rivalry timeline started with the biggest upset ever 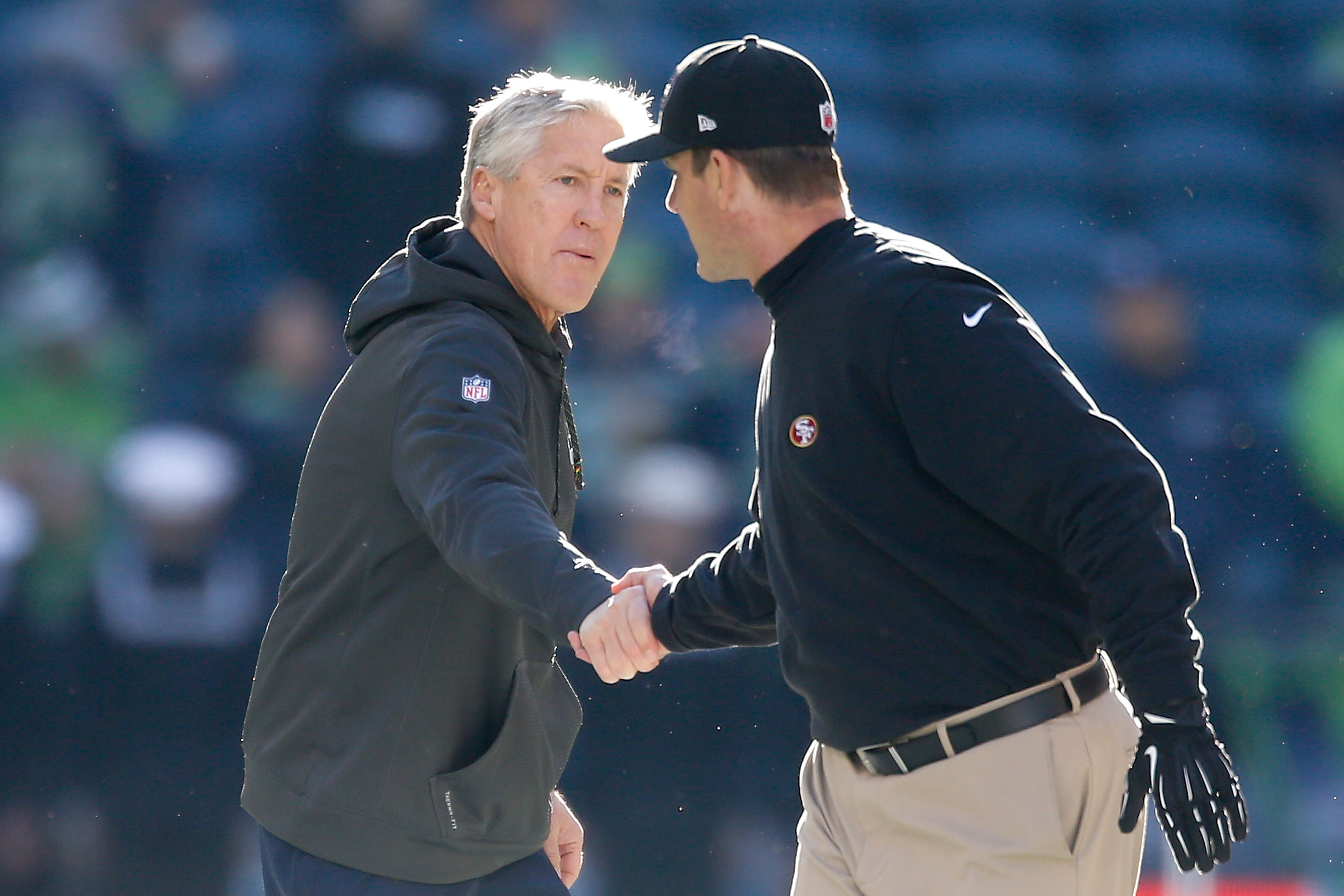 Jim Harbaugh and Pete Carroll had one of football’s best overnight rivalries during their seven years together as head coaches in the Pac-10 and NFC West.

You remember "what’s your deal?" and the bus and the other sniping.

But do you remember this all started in their first meeting as coaches, in the biggest upset in college football history?

They’d faced a few times during Harbaugh’s career as an NFL quarterback, when Carroll was a defensive assistant or head coach. Harbaugh went 3-5 against Carroll teams as a starter, FWIW.

After working as both an NFL QB and as a WKU assistant for his father at the same time (Harbaugh’s always been overactive), he turned around the San Diego Toreros and set out to do the same at Stanford. The local paper:

Harbaugh has been the head coach at the University of San Diego, a I-AA school that does not offer scholarships. He has never coached at Stanford, never been a I-A assistant, never recruited I-A players, couldn’t get the Tulane job and a year ago was nailed for DUI.

So you might be asking yourself: Why is Harbaugh qualified to coach Stanford?

For a program in the gutter, this is a huge gamble.

Stanford had gone 1-11 the year before, and Harbaugh began with three blowout losses in four games.

Carroll’s two-time-champion, 35-game-home-winning-streak, preseason No. 1 Trojans hosted Stanford and, speaking of huge gambles, was favored by anywhere from 39 to 41.5 points. The Cardinal were also sending out first-time starting QB Tavita Pritchard.

One of the biggest plays on the game-winning drive: Pritchard converting a fourth-and-20 by throwing to a Harbaugh WR who'd later play CB for Carroll against Harbaugh in the NFL. You know him as Richard Sherman.

They say it’s the biggest point-spread upset ever. It topped Appalachian State’s win at Michigan by more than a touchdown, giving 2007 arguably the two biggest upsets of all time.

Now imagine how much madder USC got when it lost a blowout to this team.

Carroll had called a late timeout in garbage time, so Harbaugh ran up the score. The two then created a catch phrase.

Aided by NCAA sanctions against USC, Harbaugh and Stanford protege David Shaw have combined to beat the conference’s biggest brand name in eight of their last 11 meetings.

Carroll left for the Seattle Seahawks, and Harbaugh followed.

NFL people, who don’t have a handle on actual rivalry, started talking up Seattle-San Francisco like it was Ohio State-Michigan. It was fun, though. The highlight:

While Carroll's respect for Harbaugh seems to be sincere, beating him was undeniably sweet. Carroll said late Sunday night that though he never considered succumbing to the temptation to go for two after Seattle's last touchdown, "everybody else around me [had that thought]. A lot of people reminded me about it."

If some of the Seahawks wanted Carroll to put it on Harbaugh, they had their reasons. Two Seattle defensive backs, Sherman and Earl Thomas, told Y! Sports that Harbaugh drove by the Seahawks' team bus in the Candlestick Park parking lot following the Niners' 13-6 victory in October and mockingly saluted the vanquished visitors.

"He honked his horn at the bus and waved," said Sherman, who did not witness the incident. "That happened — a bunch of the guys told me. Yeah, he was [honking]."

Said Thomas, noting that Harbaugh turned 49 on Sunday: "Happy birthday — that's what you get. Yeah, he [honked at us]. It seems like he tries to be a professional in front of the camera, but he does his antics, like that, when the cameras aren't around."

Their record against each other as head coaches sits at 6-6.

Years later, Carroll and his boss were still having fun with the rivalry. After Seattle drafted two of Harbaugh’s Michigan players, Carroll praised Harbaugh, leading Seattle's GM to drop a "What's your deal?" to laughter.

They’re both weird (Harbaugh is our weirdest coach, but Carroll might be second), ultra-competitive, accomplished dudes who happened to be in each other’s paths for a long time.

"Animosity? No," Harbaugh said. "That's erroneous. Erroneous. It's football. It's competition. It's winning."

As coaches in the same college conference and the same pro division, they've had conversations, right? Do they get along?

Carroll was asked Thursday at his team's headquarters in Renton, Wash., what's the deal with his relationship with Harbaugh?

"What's the deal, huh?" Carroll said. "We have not been friends over the years. We don't know each other very well. It's a very, very confined relationship in that regard."

Once Harbaugh got the Stanford job, he put Carroll and USC in his sights, as publicly as possible, because USC was Goliath.

"We wanted to raise our program up to that program," Harbaugh said Friday. "That was our goal. Put that goal down, had that in mind, and worked to achieve it."