How different would college football be if UAB had hired Jimbo Fisher? 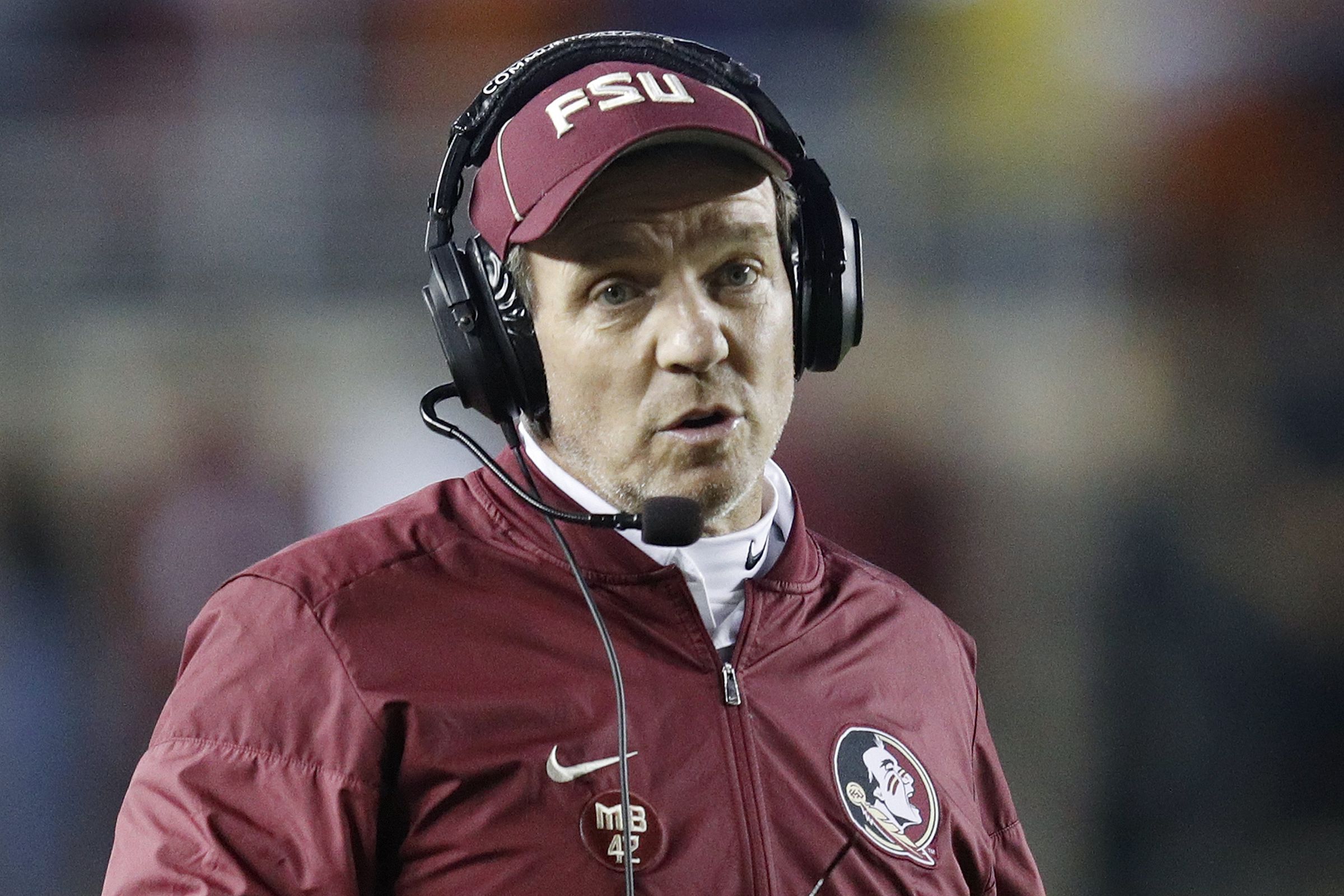 This is based on a chapter from Matt Brown’s book, "What If? A closer look at college football’s great questions," available at Amazon.

A coordinator at LSU, Fisher had not only helped build a championship offense in Baton Rouge, he’d played and coached at Birmingham’s nearby Samford and had family ties to the area.

UAB drew up a contract to pay Fisher around $600,000, with $350,000 covered by booster money. UAB was ready to pick Fisher up in an airplane and take him to an introductory press conference.

And then Alabama said no.

UAB swung and missed on Pat Sullivan, its OC who would become a success at Samford. Alabama State Senator and UAB booster Jack Williams told me Rick Neuheisel, the future UCLA head coach, was considered.

UAB hired Neil Callaway, an offensive line coach close to Bear Bryant Jr. The move was panned by national media. Callaway would leave after five seasons without a bowl.

How good could UAB have been under Fisher?

Given Fisher’s track record with quarterbacks and his ties to Alabama (he also coached at Auburn for five years), a recruiting bump would have been likely — difficult academics, poor facilities, and all.

Fisher would have inherited QB Joe Webb, who would be drafted by the Vikings and had dual-threat potential, but struggled with efficiency.

With a solid QB, conference-average recruiting, and great coaching, UAB likely would have reached bowl games in 2008 and 2009, the second and third in program history.

Success would have grown UAB’s fan base and made it harder for Alabama to block practice field projects or kill the program.

What are some jobs Fisher could have taken after UAB?

Let’s say Fisher drags UAB to a bowl in 2008 and starts looking for a new challenge.

Ole Miss needed a replacement for Ed Orgeron, and I’m willing to bet Rebel fans would have preferred Fisher to Arkansas runaway Houston Nutt. If Fisher had stuck around Birmingham in 2009, Auburn would have been a natural fit.

But the most interesting opening? Fisher’s home-state West Virginia Mountaineers after Rich Rodriguez left. Imagine Fisher in the Big East with players like Pat White, Noel Devine, and Geno Smith.

But what about Florida State?

The ’Noles needed a new offensive coordinator after years of stagnant production. Newspaper reports mentioned Lawrence Dawsey, a former FSU assistant who was at USF; Valdosta State’s Chris Hatcher; and George Henshaw, another former FSU assistant then with the New Orleans Saints.

The pass-happy Hatcher is the most interesting name. But he was outside the Bowden tree. Fisher had played for and coached with Bowden’s son, Terry. Jimbo’s brother would later say Jimbo was "like a Bowden."

If Hatcher or another candidate is a bit worse than Jimbo, maybe the 2007 ’Noles don’t upset No. 2 Boston College or beat No. 21 Alabama, then miss a bowl for the first time since 1981 (depriving us of a 43-man roster taking on Kentucky). That would perhaps force FSU to make a coaching change earlier than it did.

Fisher would have been a candidate for Florida State, whenever it opened, but the program would’ve had other options around 2009. They could’ve saved Rich Rod from the poor cultural fit at Michigan (which might’ve hired Greg Schiano instead).

But if FSU wanted a coach whose preferred offense wouldn’t have been a radical departure, there would have been another name in demand. That would be LSU’s successful defensive coordinator, who boasted years of NFL experience.

Bo Pelini as Florida State head coach would have been hilarious. We saw how one 1990s-spoiled fan base reacted to Pelini’s inability to reach double-digit wins. Can you imagine #FSUTwitter? And I’m sure Pelini would have responded to those tweets with aplomb.

Then, shoot, what does Nebraska do?

One possibility? The Cornhuskers hire Buffalo’s Turner Gill, a legendary QB for the Cornhuskers and once one of the nation’s best recruiters on the Nebraska staff. Gill would get mentioned for jobs like Auburn before taking over at Kansas, a tenure that failed spectacularly.

Former Wake Forest and Baylor head coach Jim Grobe claimed he was offered the Nebraska job, but turned it down because AD Tom Osborne wanted him to keep some assistants (Nebraska disputes this).

He was a former NFL head coach. He had experience as a strong recruiter for one of the most successful programs. He had a background as an offensive innovator, an area where FSU was struggling. He projected youth and energy, an Anti-Bowden.

I’m talking about Lane Kiffin, fresh out of the pros. Tennessee hired him that season, but Florida State would have been able to if it wanted.

It was silly when Kiffin picked fights with Urban Meyer while at Tennessee. At Florida State, where they’d also have to recruit against each other in state? Urban might have beaten the ’Noles by 50.

But what if Fisher decided to go to Alabama as Saban’s OC?

Even though Fisher would have been an upgrade over Applewhite, who left after one season to return to Texas, the difference in Saban’s first year wouldn’t have made up for much of Bama’s relative talent disadvantage. Maybe the Tide find a way to beat Louisiana-Monroe and go somewhere nicer than the Independence Bowl.

It’s what happens in the future that becomes more interesting. Saban replaced Applewhite with Fresno State’s Jim McElwain. Alabama’s quarterback play improved, but the explosion came from the running game. In year three, Alabama won the national title, and the dynasty was on.

Would Fisher have brought a title to Alabama sooner than that? Probably not, since beating Florida in 2008 would have been a tall order for anybody.

Does McElwain ever wind up at Florida?

And that would mean that we’d never get a press release from Florida claiming its head coach did not pose nude with a shark.

All of this could have created a true Alabama mega team.

Jameis Winston, the mega-QB recruit out of Hueytown, Ala., was considered likely to end up at Bama. But thanks to Fisher and FSU’s more open depth chart, the Seminoles secured his commitment. As a redshirt freshman, Winston led the ’Noles to a national title.

Had Fisher not been at FSU and Winston chose Alabama instead, Florida State wouldn’t win a title in 2013, and Alabama would’ve had a potential QB controversy between Winston and AJ McCarron, a Heisman finalist.

Maybe Alabama wins that 2013 title, robbing the world of the glorious Kick Six, or maybe Winston takes over in 2014 and beats Ohio State in the first Playoff.

Or maybe Fisher to UAB gives us a national champion Stanford.

After making the NFL, Winston would say he regretted not going to Stanford. If Fisher isn’t at FSU, maybe Winston decides it isn’t worth battling McCarron at Alabama, goes to a Stanford that’d win 11 games with Kevin Hogan IRL, and brings a title to Palo Alto.

This is more fun than "Winston could have created an even more powerful Alabama," so let’s go with this.

In real life, things turned out great for everybody. Except UAB.

Fisher would be named coach-in-waiting at Florida State, replace Bowden in 2010, and build a powerhouse.

Alabama didn’t get Fisher either, but things have gone OK for that Saban character anyway.

But UAB? The Blazers struggled under Callaway and his replacement, Garrick McGee. They finally found the right man in Bill Clark, who even led the Blazers to bowl eligibility, but the damage was already done. The regents voted to disband UAB’s program, and momentum was shot. The Blazers lost much of a decade, even if the outcry in response to the program’s end might’ve given them more visibility than even Fisher would’ve.