Mike Gundy’s ‘I’m a man! I’m 40!’ rant was our first clue that he’s a fascinating coach 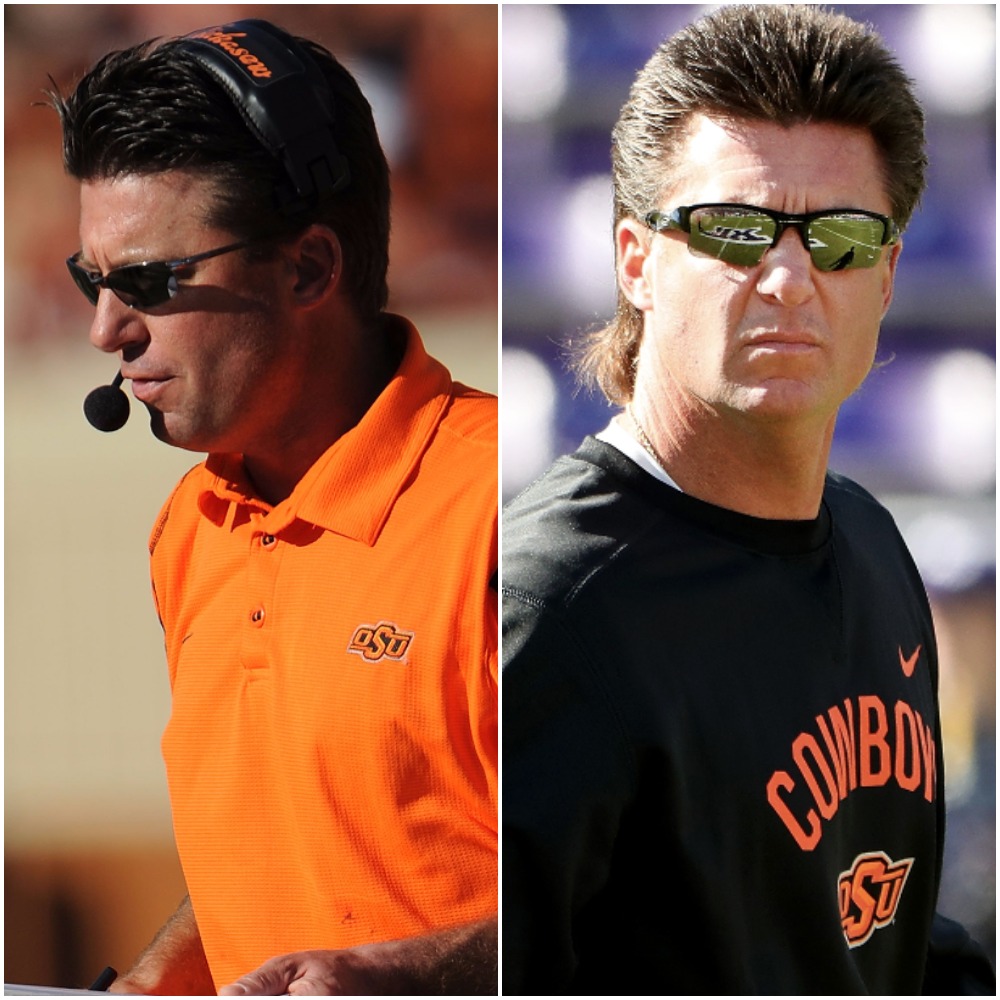 After the Cowboys’ 48-45 win over Texas Tech in 2007, Gundy wasn’t happy with a column from The Oklahoman about one of his quarterbacks, Bobby Reid, who was benched for sophomore Zac Robinson before the game.

"If you wanna go after an athlete, one of my athletes, you go after one that doesn’t do the right things," he steamed after holding up the newspaper, with pages falling out. "You don’t downgrade him because he does everything right, and may not play as well on Saturdays. You let us make that decision.

"That’s why I don’t read the newspaper — because it’s garbage! And the editor that let it come out is garbage! Attackin’ an amateur athlete for doing everything right.

"Where are we at in society today? Come after me! I’m a man! I’m 40! I’m not a kid! Write something about me or our coaches. Don’t write about a kid that does everything right, that’s hard-spoken. And then say that the coaches said he was scared — that ain’t true!"

He ended the presser by saying, "That’s all I got to say. Makes me want to puke," as somebody applauded.

What was he so mad about?

From Jenni Carlson’s column that’d been written the day before the game:

There's something to be said for not being a malcontent, but you can almost see Reid shrugging his shoulders as he says those words. Does he have the fire in his belly?

Or does he want to be coddled, babied, perhaps even fed chicken?

That scene in the parking lot last week had no bearing on the Cowboys changing quarterbacks, and yet, it said so much about Reid. A 21-year-old letting his mother feed him in public? Most college kids, much less college football players, would just as soon be seen running naked across campus.

And what of the scene television cameras captured earlier that evening of Reid on the sidelines laughing with assistant strength coach Trumain Carroll? The same cameras showed him throwing his cap in disgust after a missed play earlier, but to be laughing in the final minutes of an embarrassing loss is bad form.

Looking back, it’s funny how upset the national media was by what Gundy said.

Years later, Gundy talked about the video and the effect it had.

"It’s really helped our team," Gundy said to Fox Sports’ Bruce Feldman, as transcribed by CoachingSearch.com. "It’s funny. In recruiting, it’s faded out over the last three or four years. Two, three, four years afterward, I would go into homes to recruit — I remember being on the East Coast, and one of the players’ grandmothers came in and brought that up and talked about it for a couple minutes, then got up and left. She just wanted to talk about our willingness to support our players.

"I don’t hear about it much anymore," Gundy said. "Sometimes, I get it from my kids. I’ve got a 13-year-old that can mimic it right to the tee. He could probably go on Saturday Night Live and do it. It was a very unique time in my career, but I certainly think it helped our football team."

Reid ended up transferring to Texas Southern after the 2008 season for his final year of eligibility, and he threw for 1,791 yards and 12 touchdowns there. Reid said Gundy’s tirade negatively impacted him.

That rant turned out to be a look inside the thoughts of a coach who had more personality than he usually let on.

About a decade after the rant, he decided to just express himself all the time.

His mullet is popular on its own, he’s revealed he started growing it just to teach one of his sons a lesson, and he’s accented it by sporting wrestling singlets and putting pissed-off rattlesnakes around his neck.

His players dress up as him for fun: 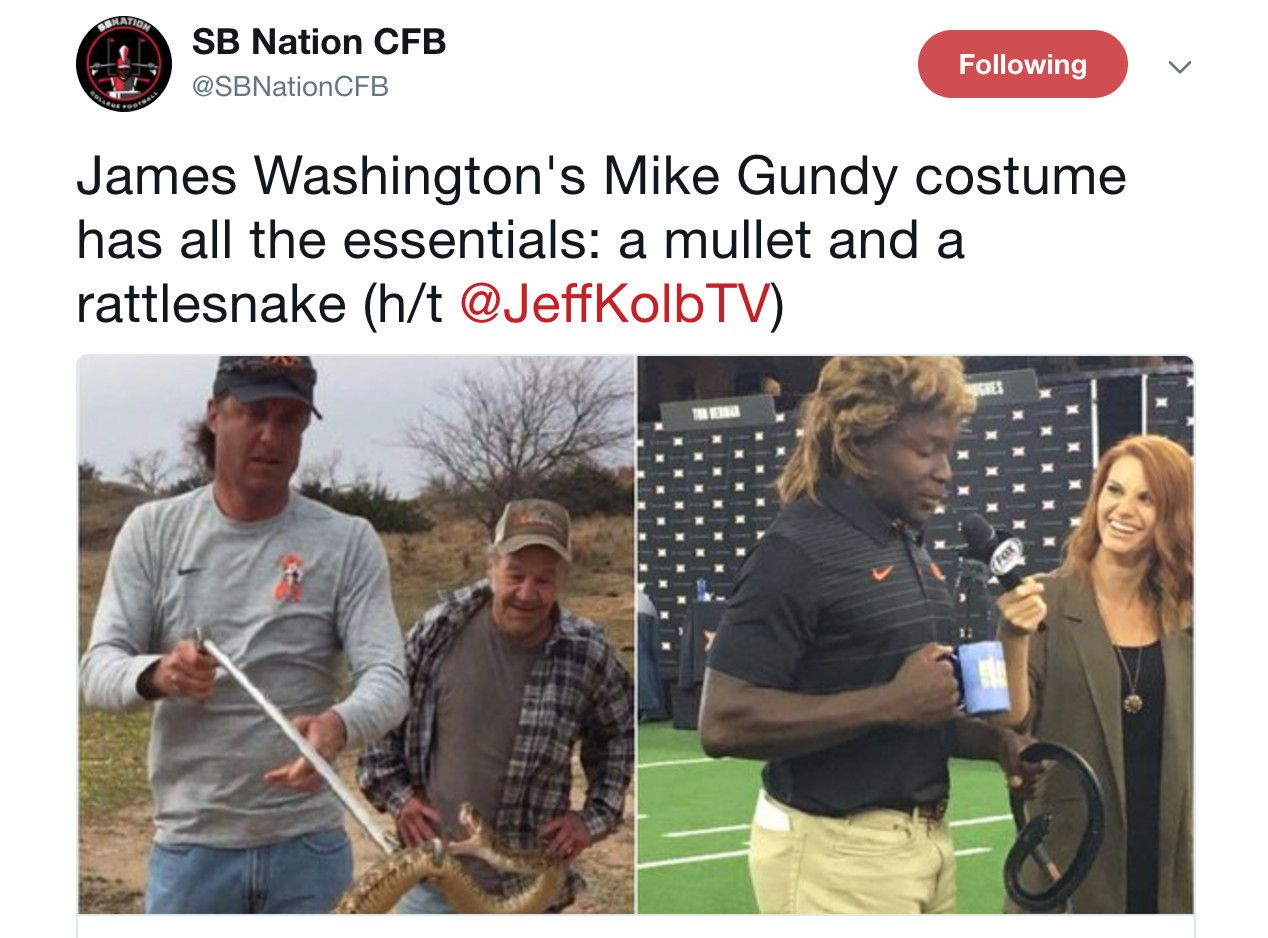 He’s also tempered his blunt streak. He’s put up with public jabs from his boss while making millions of dollars a year, even though he almost went to Tennessee after Derek Dooley was fired.

This 2007 tirade was the start of him showing us that there’s more to him than just a football coach. And thank you, Gundy, for giving us one of the greatest sports rants of all time.