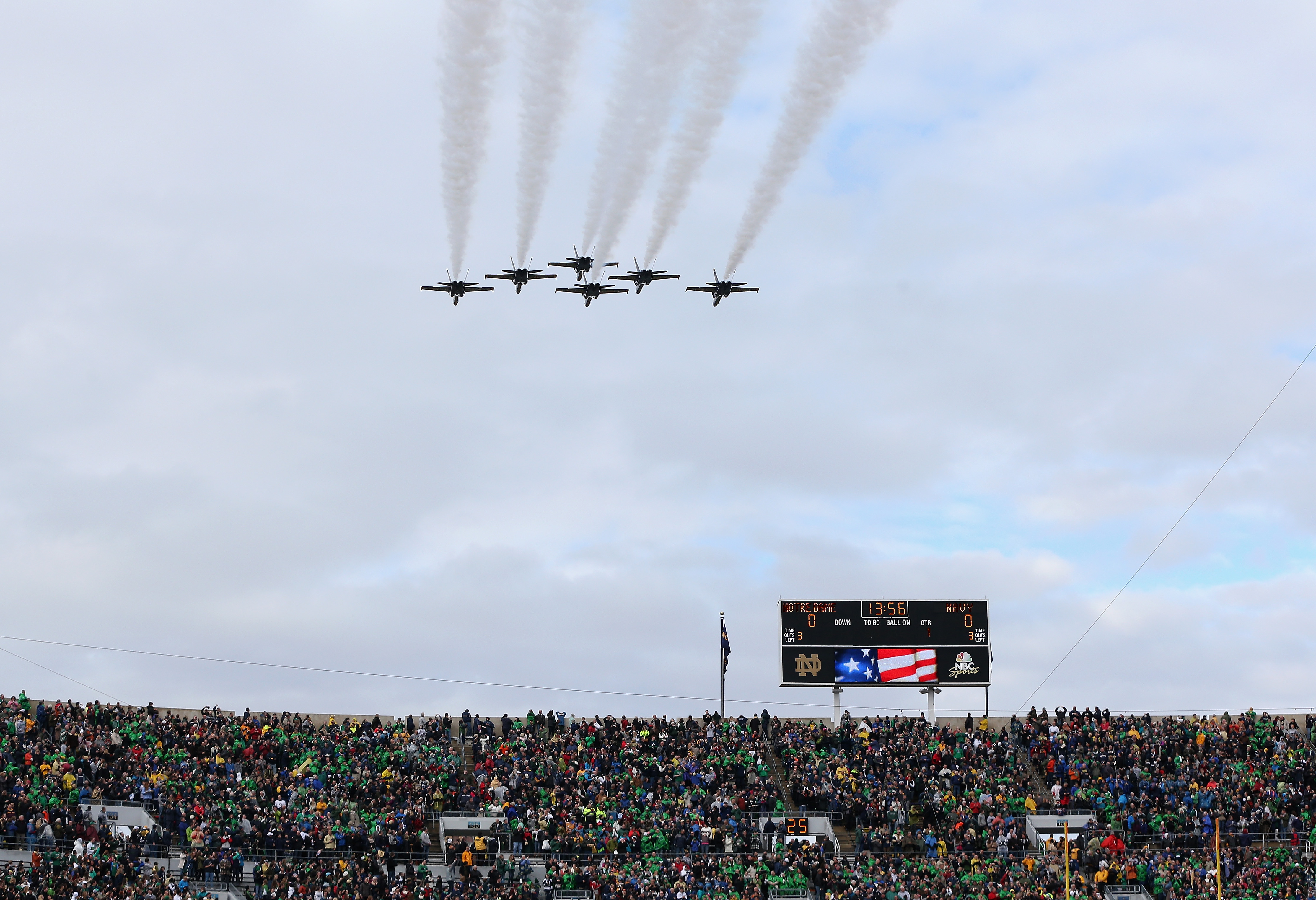 One Saturday in November 2007, one of football’s longest losing streaks was finally broken. Navy beat Notre Dame after a 43-year streak, the longest in NCAA history.

Heading in, both teams were having very different seasons.

But in the week leading up, the expectation was that Notre Dame was going to walk away with a victory. Heading in, Notre Dame was a 3.5-point favorite with history on its side. Only seven of the Irish’s 43 wins had been by 10 or fewer points.

The first game of this series was in 1927. When America declared war on Japan, the draft caused attendance on Notre Dame’s campus to be critically low. Navy designated the campus as a training center, which helped keep the university afloat:

Thousands of young men came to Notre Dame for officer training in classrooms, drills on the quadrangle, and mass meetings in the theater and dining hall.

Notre Dame has since given Navy an open invitation to play each year, and the Irish consider the Navy series among the most sacred of their many rivalries, no matter how lopsided it got.

The Irish remained a national power for decades, while the balance of power tilted against the service academies.

"We have some tough memories losing to them, but still some iconic games," Ken Niumatalolo, a longtime Navy assistant who's currently the head coach, told SB Nation.

"In ‘97, we completed a Hail Mary. Our guy caught it, and he's running down the sideline. We think he's gonna score. Then Allen Rossum pushed him out at the 1-yard line, and they beat us.

"We're thinking we were gonna break the streak, then you come to find out that not only was it great effort from him -- he was the backside corner -- but he was [eventually] the fastest guy in the NFL."

"I was like, ‘Jeez, not only was he a corner, but he happened to be the fastest guy in the league.' Maybe if he was a little bit slower, we woulda scored.

"Every year we played them, it was, ‘Let's be the team that beats them.' But they beat us like 44 straight times, so after a while, you're like, ‘Let's just find a way.' You search for small goals. Win the first quarter. see what happens.

The 2007 game was close throughout and went into overtime.

Notre Dame drove inside the 5-yard line and punched it in. On the two-point conversion, ND’s pass was batted down by Navy’s Blake Carter. Navy started rushing the field in celebration. But officials called interference on Carter:

"You can't make that call there. That's a good defensive play."

That was not me — biased Navy broadcaster talking — that was Pat Haden of NBC talking as he watched the replay. When NBC showed a shot seconds later of Navy Coach Paul Johnson arguing the call, Haden said, "I don't blame him for being upset."

Notre Dame had one last try. The offense attempted to rush it in, but Navy stuffed them well before the end zone.

The long and dreadful 43-year streak was finally over.

It wasn't one of 2007's biggest upsets based on point spreads alone, but it certainly was if you account for history.

"Wow, what a game," Johnson said, via the Mercury News. "I’m so happy for our players. Now they will have that they are the class that broke the streak, and they won’t have to hear any more about it."

"It's important for the seniors because this group has had a lot to do with us getting the program turned around," Navy Coach Paul Johnson said. "They've done everything we asked them, and they play real hard. We might not be the biggest or the fastest, but they play with a lot of heart."

The Midshipmen (5-4) needed that heart all afternoon. Before boarding the buses that would take them from their hotel to the stadium late Saturday morning, Johnson said he had three keys to winning the game.

He then said, "Believe you can win," three times.

"It made us feel like we had a chance, because I think before that, I don't know if we truly believed that we could beat them," Niumatalolo said.

"Because when you lose to somebody 43 times, you're like, ‘Ok, we can't beat these guys.' But when we finally did, you know what, it's still gonna be hard, but there's a chance."

Weis was fired two years later, losing to Navy once more along the way, and Notre Dame hired Brian Kelly, who lost to Navy in 2010 and 2016. Niumatalolo was the Midshipmen's head coach for those three wins.

This rivalry has a long history, and the streak made it seem less relevant over the years. But this game reminded people why it was important to begin with.

"The Notre Dame game is always a huge game for us," Niumatalolo said. "It's a great recruiting tool for us, cuz Notre Dame is still an iconic school.

"I walked out that there, and I was in awe of the stadium."