Everyone thought No. 1 Ohio State losing to Ron Zook meant game over. Nope! 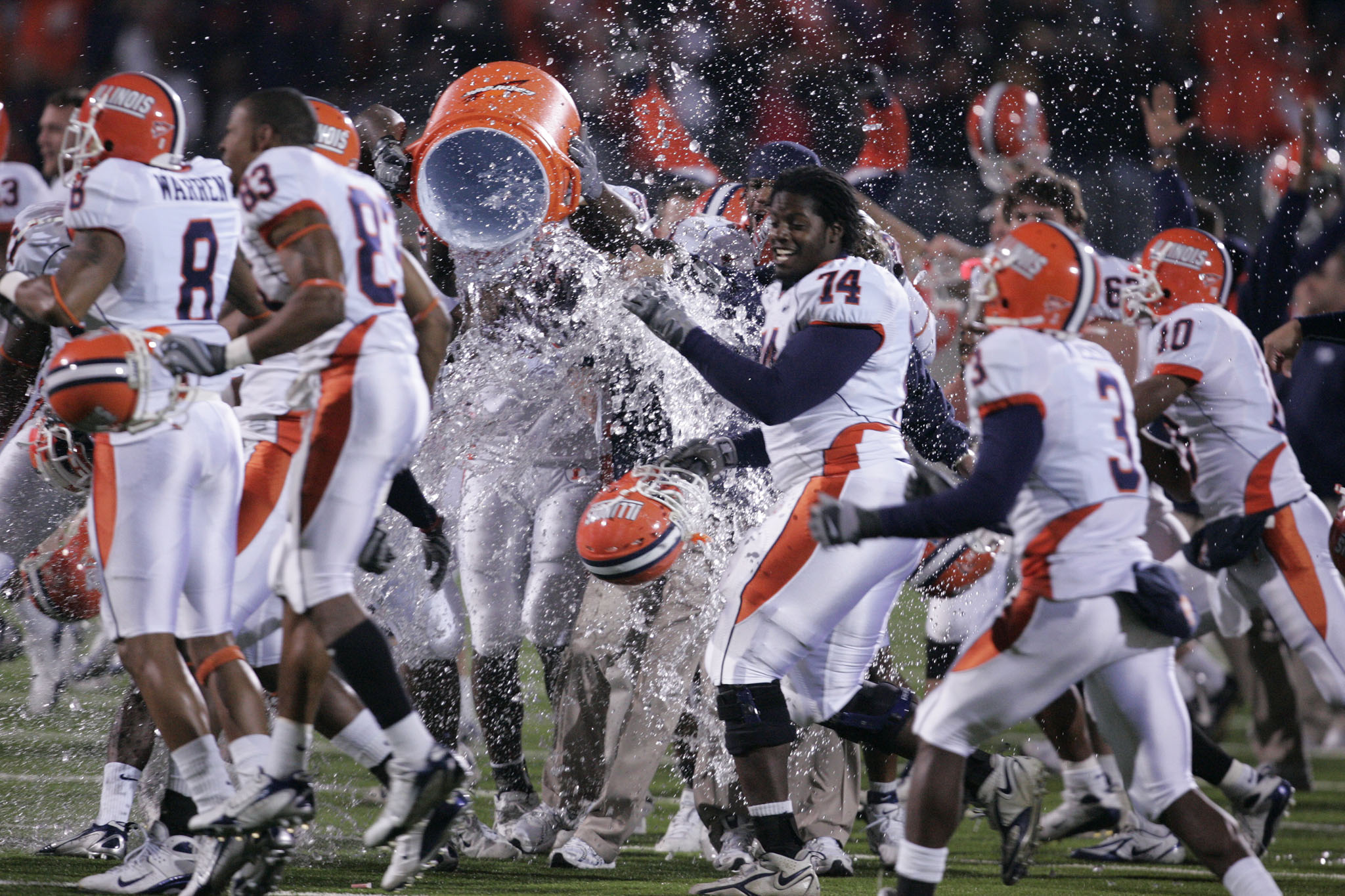 Ron Zook’s late-2000s Illinois teams had some memorable players; the kind you could recall to sound knowledgeable at a bar in 2017, but not household names. Juice Williams was a good QB for four years, and running back Rashard Mendenhall and receiver Arrelious Benn were high NFL draft picks. They had a fun offense, but the unit finished 61st in scoring in ‘07.

And then Illinois hit up the country’s best running defense for 260 yards on 51 carries.

Ohio State turned the ball over three times to Illinois’ zero. The finishing play, when Illinois led by a touchdown:

On a fourth-and-1 from their 33-yard line, the Illini lined up to punt. But Ohio State Coach Jim Tressel called a timeout because he was unsure if he had 11 players on the field.

Williams demanded that Zook let Illinois go for the first down.

"We can get a half an inch," Williams said.

Zook responded, "If you don’t get it, I’m going to hurt you."

Williams got it, and Illinois flushed the clock. You can watch this whole scene from the one-hour, 46-minute mark:

Until this point, Ohio State had been dominant.

In a season full of upsets elsewhere, the Buckeyes were outscoring opponents by an average of 35-10. Running back Beanie Wells was a touchdown machine, and receivers Brian Robiskie and Brian Hartline helped give the offense balance. QB Todd Boeckman would lose his job to five-star freshman Terrelle Pryor the next season, but he’d been adequate.

But the Buckeye defense had slipped a bit in the weeks prior. After giving up more than seven points once in its first seven games, the defense gave up a season-high 17 in three consecutive games.

Ohio State’s title hopes were supposed to be cooked.

"Illinois Is the Team That Spoils Ohio State’s Season" was the headline of The New York Times recap. You aren’t supposed to be able to lose to Illinois on Nov. 10 and go on to the title game.

The loss sent the Buckeyes from first to seventh in the BCS standings. They rebounded to beat Michigan, 14-3 and inched back to No. 5 after Week 12.

Ohio State was in the clubhouse by the weekend of Nov. 24, when losses by Kansas (to Missouri) and LSU (to Arkansas) bumped the Buckeyes to No. 3.

They got all the way off the hook on Dec. 1, when 4-7 Pitt stunned No. 2 West Virginia and Oklahoma annihilated No. 1 Missouri in the Big 12 title game.

That set up the Buckeyes and LSU for all the marbles. The only reason we don’t talk much about that as an all-time stroke of luck is that Ohio State couldn’t finish the job.

This game was Zook’s greatest hit, and he deserved it.

The former Florida coach lost that job in 2004 (after beating another national champ, Nick Saban's LSU), fired but left to coach out the regular season. Zook’s last game with Florida was a road win at Florida State. The site is known as Ron Zook Field at Doak Campbell Stadium in Tallahassee.

Zook only spent three years in Gainesville, and none were all that good. But when Urban Meyer led the Gators to a title in 2006, he did it with a bunch of Zook’s players.

By that time, Zook was in Champaign. He’d coach Illinois for seven years. He won a combined four games in his first two and an average of five in his last four. He’s now a Packers assistant.

But that third year, 2007, he won nine and reached the Rose Bowl, where Illinois lost to final No. 3 USC. He was the Big Ten’s coach of the year.

Many of Zook’s Florida recruits defined the 2006 season. If not for some outrageous Ohio State luck, his Illinois team would’ve wrecked 2007.