Never forget USF ranked No. 2 in the BCS in only its 11th year of football

Your eyes do not deceive you. Those are the USF Bulls at No. 2 in only their 11th year of football existence. 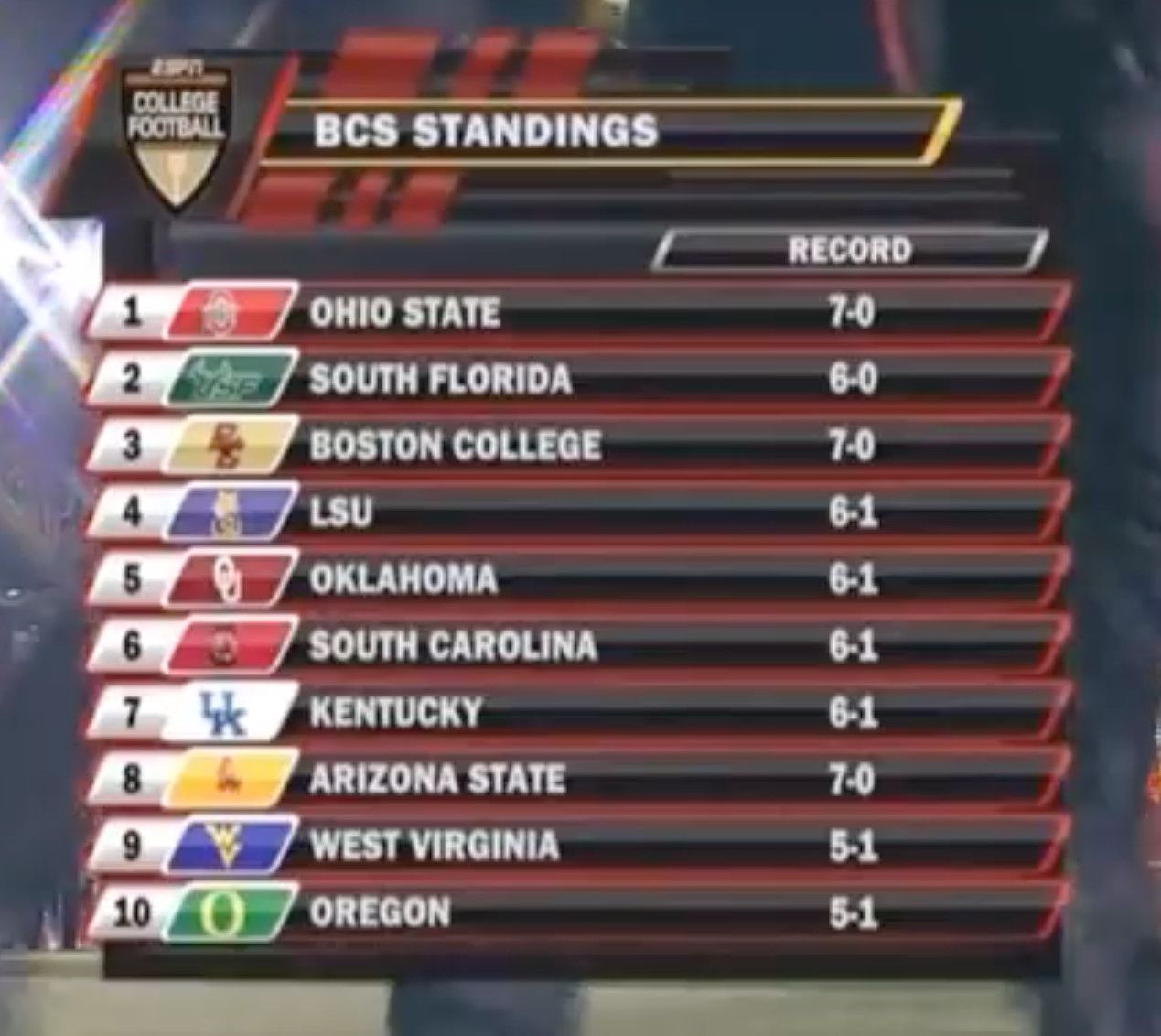 Not everyone was convinced, however. Lee Corso and Kirk Herbstreit of College GameDay weren’t. Corso didn’t even have USF in his top five.

By the end, the upstart’s naysayers would be proved correct.

But before that, the Bulls would make the most improbable rise in recent college football history.

USF president Francis T. Borkowski convened 40 people to look into a program. In December 1995, Jim Leavitt was hired as head coach. In ‘96, he signed his first recruiting class.

The start was quite humble, to say the least.

Tradition? The closest thing around here to Touchdown Jesus was the "Ponderosa" — the affectionate nickname for a now deposed group of trailers that once housed the coaches' offices and meeting rooms. That's where the Bulls cut their teeth, enduring floors pocked with holes, huge young men crammed into tiny spaces and the occasional drive from the baseball field next door.

USF is in an interesting tier. It will never have the football clout of Florida, FSU, or Miami. But each of those had built sudden powers in the previous two decades, based on local recruiting, so USF hopes were high.

By 2001, USF reached what is now FBS, the sport's highest level. The transition is often rough, but the Bulls went 8-3 and 9-2 in their first two seasons.

In 2005 came the first postseason berth, and that recruiting class offered pieces that would put the program on the map two years later.

Quarterback Matt Grothe had won Big East Rookie of the Year. Future second-round DB Nate Allen was a sophomore, and George Selvie was a monster at defensive end. The 2006 Bulls had won four of their last five games, including an upset of No. 6 West Virginia in Morgantown.

The team was picked fourth in the Big East in ‘07, and not even its tight end, Nick Capogna, knew what to think:

"We had no idea," he told SB Nation. "I’ll be honest with you: Any game I ever played in college football, I had no idea if we were gonna win or lose, I-AA or ranked. Jim Leavitt has his master’s in psychology; people don’t realize that. So he’s a master of motivating, master of that kinda the mental warfare that he would play. He was doing a good job of convincing us: ‘Hey, this guy from a I-AA school is gonna wear you out.’"

I-AA Elon only warmed the Bulls up for Auburn. USF had never beaten an SEC team and had been pasted by Alabama and South Carolina in its early years. Linebacker Ben Moffitt remembers arriving at No. 17 Auburn and being perceived as less than a threat.

The Bulls would celebrate a game-winning, overtime TD in the end zone at Jordan-Hare Stadium.

"It was like, ‘Holy shit, we’re here.’ No matter what happened the rest of the season, they couldn’t take that away. We had beaten an SEC team, a not-terrible SEC team, on the road and sort of validated the program on national TV so that everyone can see it. To get that far was kind of insane."

Ranked for the first time in school history, No. 23 USF easily disposed of another power-conference team, a struggling North Carolina.

That set up a Friday night in late September, with USF hosting fellow future No. 2 West Virginia.

The first ranked vs. ranked matchup in program history. The No. 18 Bulls hosted as a touchdown underdog.

"We played in big venues, but that Friday night we — that stadium got arguably as loud as any place I’ve played," Capogna said. "I think Morgantown got pretty loud the year before, ‘cause they were coming back, but that was probably the loudest. You got Raymond James Stadium, it hit a decibel I’d never heard before, and I’ve been a lifelong Bucs season ticket holder in my family."

College football hysteria hit Tampa. The get-in price hovered around $150. This wasn’t supposed to happen at a program that first kicked a ball in 1997.

"To get a group ticket package or to buy a whole bunch of tickets for the game, our ticket office was making — because people were saying, ‘Oh I’m a USF grad,’ and they can see like the phone number code from West Virginia — so they literally started making people fax in copies of their diplomas to buy tickets," Sherwin said.

Moffitt’s pick-six broke a scoreless tie and sent the stadium into a frenzy. Grothe’s 55-yard heave to Carlton Mitchell in the second quarter put USF up 14-0.

"I’m standing there in shorts and flip flops, and he makes the pick and he runs it back, and I literally felt the ground under my feet move," Sherwin said.

USF would capitalize on miscues all night. Two happened in the red zone, where backup QB Jarrett Brown mishandled a snap and threw an interception. Vaunted QB Pat White missed the entire second half. The Bulls forced six turnovers and held on for a 21-13 win.

"People don’t know this, but [WVU head coach] Rich Rodriguez had just raided our coaching staff," Capogna said. "My offensive line coach [Greg Frey] my freshman through junior season had went to West Virginia, and my offensive coordinator, Rod Smith, who actually played for Rich Rodriguez back in the day, he went to West Virginia my senior year, and I think that incensed Jim Leavitt because he looked at it as a lateral move."

The day after the win, Leavitt phoned into the Auburn-Florida broadcast booth. The Gators would lose, and the Bulls would jump further.

"It became a party," Sherwin said. "The entire campus, it became a football school for a week. It would have been competitive with any football school in America. You try and tell people about it now, and they don’t believe you."

USF went from 18th to sixth in the human polls. The Bulls beat FAU after a big fourth quarter, then put a spanking on UCF. It was the third time the future rivals played, and Leavitt’s offense passed on fourth down in UCF territory while already up, 57-12.

There USF sat at No. 2. The Bulls traveled to Rutgers for a Thursday night game.

Up seven, the Bulls blocked a 48-yard field goal and took it to the house. Except the refs saw this:

That looks like an illegal forward pass on linebacker Tyron McKenzie. The USF drive petered out with a missed field goal, and the Bulls went to halftime with a 17-10 lead.

"It was whatever the refs wanted it to be at that play," Capogna said. "I had no idea. There were a couple of questionable instances, yeah the illegal — let’s be honest, I think my buddy did — he did launch it. Let’s call a spade a spade here, he launched it forward. He took a gamble. I can’t fault the guy."

The Bulls had 10 penalties for 99 yards against Rutgers. Only two 2007 teams finished with more penalties than USF did, and the Bulls would help break the Sun Bowl’s penalty yardage record before halftime.

With USF driving in the final minute, Grothe connected with Amari Jackson. But Jackson pushed off on a DB, and the play was called back. On the next play, Grothe was intercepted.

"I was flabbergasted at how that game went," Moffitt said. "It was tough. It was definitely tough. I think it took a lot of wind out of our sails, and it definitely affected the course of the rest of the season."

The Bulls would lose their next two and fall out of the top 25.

"The one that really hurt was the homecoming game against Cincinnati," Sherwin said. "Grothe was just terrible that day. He just was not good. Four picks, I think he threw. But then they bounced back."

USF won out and made the Sun Bowl against fellow former No. 2 Oregon.

So we must touch on the legend: Did USF play the Sun Bowl hungover?

The game in El Paso kicks off just after noon local time. Sneaking over the border to Juarez for a few libations is popular. Capogna swears any drinking was finished 48 hours before game time, despite unconfirmed rumors involving hair of the dog in USF’s Gatorade bottles on the sideline.

"I can’t speak about being hungover at practice. I’ll neither confirm or deny that," he said. "But the Oregon players were out at the same places we were, and they do a good job. Like two nights before the game, you shut it down."

Moffitt echoed those sentiments, as did a beat writer who covered the team.

Sober or not, the Bulls struggled. The Ducks were without star QB Dennis Dixon and went with Justin Roper, a redshirt freshman who had not yet started.

What USF didn’t account for was the genius of Chip Kelly, in his first season as offensive coordinator. Kelly drew up a rushing attack that relied less on the QB and more on the RB, punishing the Bulls with future NFL back Jonathan Stewart, who was finally healthy. Stewart went off for 253 yards (smashing a Sun Bowl record) and 11 yards per carry.

USF’s defense went back to the sidelines, perplexed that the attack looked nothing like the one they had prepared for.

The Ducks later told SB Nation that they'd changed up their offense to avoid Selvie.

But the legacy of USF’s 2007 is what can happen when talent meets opportunity.

Look at the confluence of events that had to happen.

The state’s three powers had down years at the same time, clearing room in the polls and in local and national attention. Other elite teams were losing left, right, and center across the country. A small school had to not only produce a good record, but its big-name opponents had to also be ranked. There’s the reason 6-0 USF reached No. 2, while 12-0 Hawaii only reached No. 10.

USF kept the ship afloat when it seemed nobody actually wanted to be the national champion. In a way, it’s the ultimate 2007 story.

For a few days, a preteen program was the No. 2 team in the country. Nobody can ever take that away.