Remember when Tim Tebow was just a college football player? Let him tell you about it

It’s been an interesting 10 years for Tim Tebow, to say the least. He’s gone from winning the 2007 Heisman Trophy to an up-and-down NFL career to an ESPN career to ...

"I’m not sure I imagined I would be playing baseball," Tebow told SB Nation about his current job in the New York Mets’ minor league system. "But so much stuff has happened, and I’m so thankful for all of it. It’s been a whirlwind, but so much fun. And my life is one with a lot of ups and downs and twists and turns, but it definitely keeps me on my toes."

Sometimes it's fun to think back to when he was nothing but the country's most famous backup college QB. Tebow went from being a short-yardage, situational runner in 2006 to Florida’s starting quarterback in 2007 and the first-ever sophomore to win the Heisman.

Tebow said the former helped him with the latter.

"The majority of the plays that I played were third down, fourth down, goal line, red zone plays that were super impactful for the game," Tebow said of his freshman role behind Chris Leak. "So having to run in on a fourth-and-1 or a third-and-3 or at the goal line and in the red zone, those are huge situations where you have to deliver it."

Swapping out versatile players behind center was a trend at the time, led by fellow Heisman finalist Darren McFadden's Wild Hog at Arkansas.

"I think it really helped prepare me for the pressure-packed situation, whether it was the different plays vs. Tennessee or LSU or Alabama, FSU — those big moments, those big games." 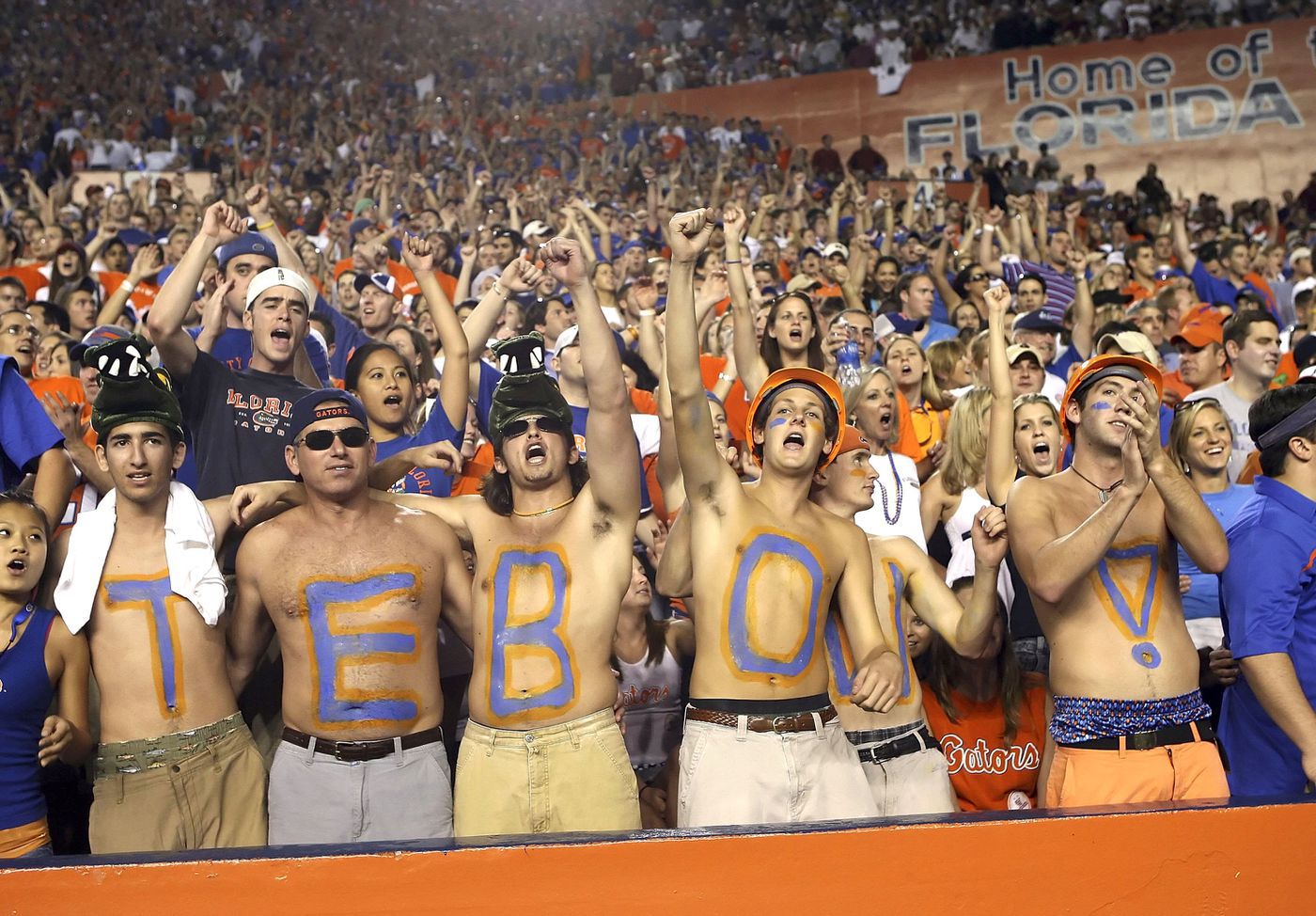 "Honestly, sometimes it’s easier when you’re in the game and in the flow of the game, so it helped me with the mental preparation on the sidelines, running in for one play back and forth. It just really helped me how to prepare and then also how to handle the moment."

Florida went 9-4 in 2007 and was left out of the SEC Championship, thanks to losses to Auburn, LSU, and Georgia.

Leading up to that LSU classic, Tiger fans got ahold of Tebow’s phone number and harassed him all week.

After Tebow’s first touchdown pass to give the Gators a 10-0 lead in Baton Rouge, Tebow ran to the end zone to reference the calls and texts.

"It was not planned at all," Tebow said. "When I got to the end zone, and I looked up right in front of the student section and there were like 30,000 people giving me the bird, it was just instinct. Most of them had probably been calling me earlier that week, so it was just a little friendly reminder, saying hey."

Eventual national champ LSU won, 28-24, in a thriller that some would consider the best game of 2007’s regular season.

"What an unbelievable game that was," Tebow said. "Back and forth, and their five fourth down [conversions]. Even though we weren’t able to pull that one out, it’s still a memorable game just because of the environment, how competitive it was, how many great players were on the field that night. That was a very, very fun night to play football."

Tebow sure doesn’t mind the current state of the Florida-LSU rivalry, which he helped ignite.

It was recently heightened by the apparent bad blood between the programs after the rescheduling of last year’s game due to Hurricane Matthew.

"You know what, I think sometimes rivalries need sparks a little bit," Tebow said. "I think it was 2003 when Florida upset LSU, I think that did a lot for the rivalry. I think when we upset LSU in 2006, and ‘7 and ‘8, and all those big games we had."

One of 2006’s most memorable plays was Tebow’s jump pass against LSU.

"It was a little bit of a throwback play, where it’s kind of just supposed to be step back and kind of toss it to him, where he kind of goes to the goal post a little bit. But in practice, when we were running it with our defense, I just actually caught the ball, ran it to the line of scrimmage, jumped up, and all the linebackers went up, and Tate [Casey] was open, so coach was kind of like, ‘Well, that might actually work!’

"We get to the game, and there’s only a couple seconds left before halftime, and I know that I can’t come down and get tackled because we’re running out of time. We can’t kick a field goal. And so I say, ‘set hut,’ they snap me the ball, and I see Tate get grabbed right off the line of scrimmage. So I get to the line of scrimmage, and I jump and I try to buy a little time, and you can see me kind of double clutch it."

"Finally he gets off the jam, and I kind of give it a lot of air and throw it in the back of the end zone, and he’s able to make a good play."

A few years before that, Florida’s Ron Zook team in 2003 — yes, The Zooker, who'd knock off No. 1 Ohio State with Illinois in 2007 — upset Nick Saban’s No. 6 LSU Tigers in Death Valley, with freshman QB Leak. Before this stretch of games, the two teams had played every year since 1971, but it hadn’t been thought of as a major rivalry by most fans.

"Really, since then, I think it’s been a big game every year," Tebow continued. "It’s become a great rivalry game. I love it because I think rivalry games are what separates college football from a lot of other sports. I’d love for that rivalry to get even bigger."

Florida’s 2007 loss to Georgia was tough for UF, but UGA might’ve cost itself.

Georgia’s end zone dancing celebration after a first quarter touchdown stuck in the minds of Tebow and Urban Meyer.

"It definitely motivated us," Tebow said of Florida’s next two Georgia games. "That was a difficult night, not being able to pull out that win, the Florida-Georgia game being so big for me and my family. In my hometown, that was my parents’ first date was that game, having an injured shoulder and making it worse in that game was disappointing. That ride back to Gainesville was a tough one, and in 2008 we came ready to change things."

In '08, Tebow followed up his Heisman by contributing to his second national championship team. 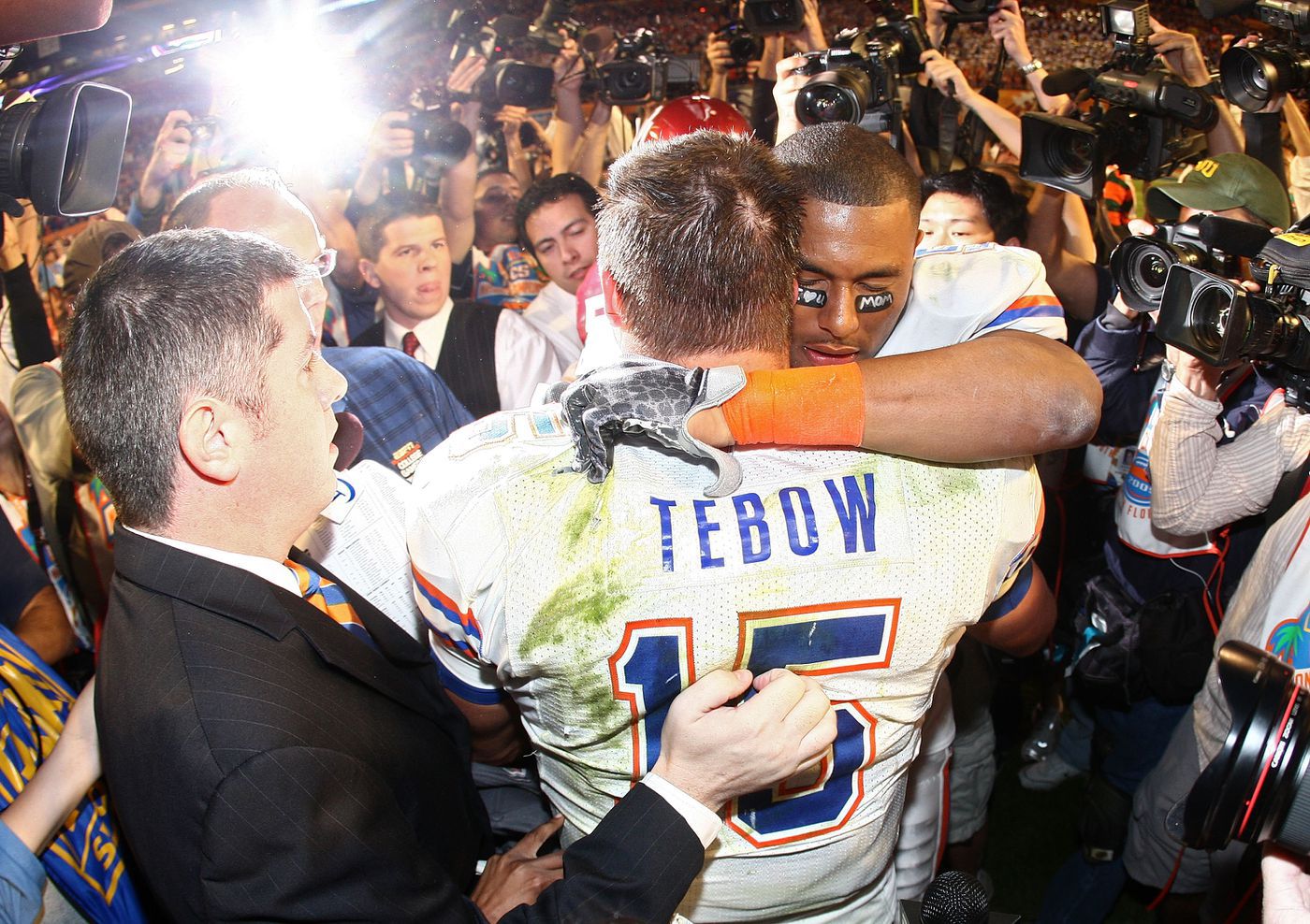 Combine those with the classic effort his team put up against 2007’s champ and the Gators’ 2009 SEC Championship upset by Alabama, and Tebow played into four years of the SEC’s seven-year title streak — or five, if you count Auburn’s 2010 title, won by former Tebow backup Cam Newton.

"Leading up to us winning in 2006, (U)SC was very dominant. They had won a couple of titles. Texas won the year before that in a big game against SC. So it was really special starting that run," he said, "but also just showing how many great athletes were playing in the SEC and how it was stacked from top to bottom. Every single team in that league could compete, and the league had a lot of physical players.

"So that was a pretty special run."