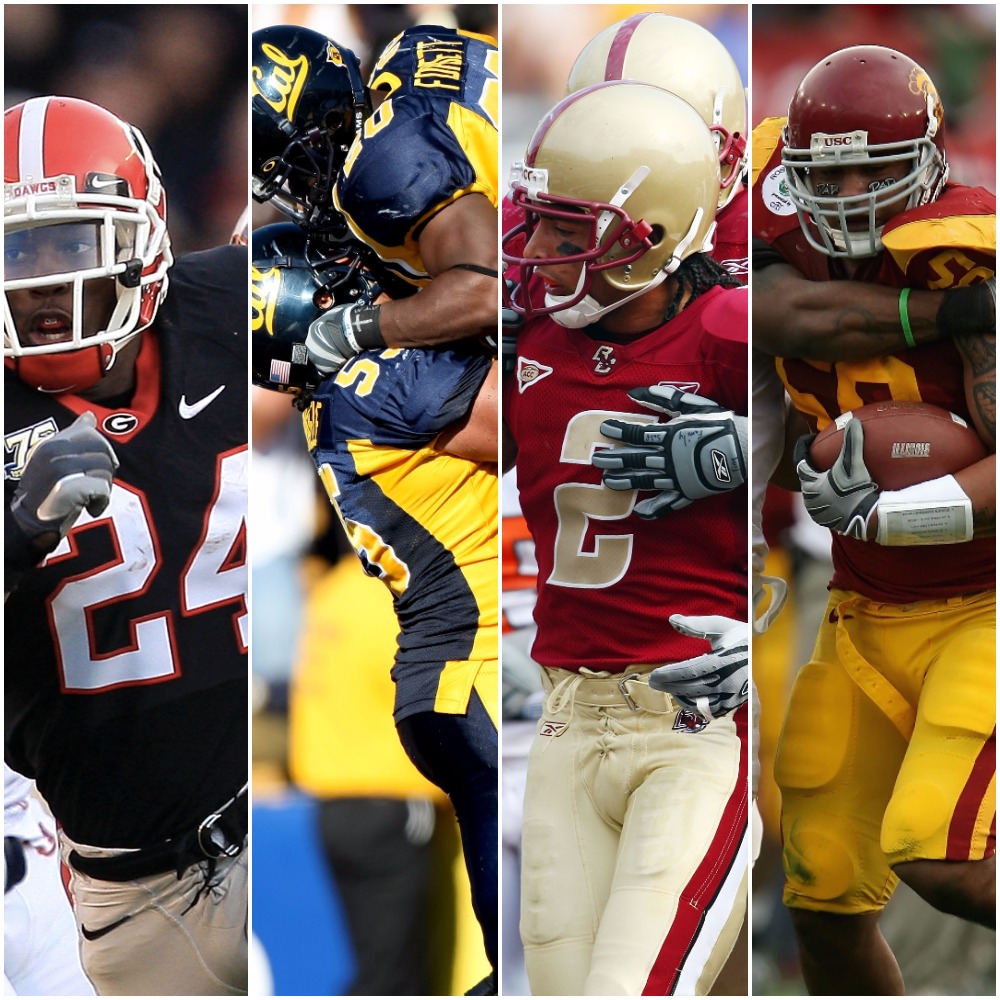 Nine different teams ranked No. 2 in either the AP poll or BCS standings at some point in the weirdest season ever, and it wasn’t just the volume that was unusual.

There were weird names in there! Cal, USF, Boston College, Kansas, and West Virginia hadn’t been that high in a long time, or ever. USC, LSU, Oregon, and Georgia made more sense, at least. (You could throw in Missouri, Ohio State, and Oklahoma, the teams that never ranked exactly No. 2 in either main top 25 but hovered right around it, if you want to get even wilder.)

Let’s talk to writers who remember their teams being part of the 2007 season’s No. 2 club, one of the oddest families in sports.

Michael Miller, West Virginia blog Smoking Musket: The season that was cancelled due to the war.

Jeremy Attaway, Georgia blog Dawg Sports: Bittersweet. Georgia was the final No. 2 and clobbered Hawaii in Mark Richt's second Sugar Bowl victory. But Georgia was vying for a shot in the BCS finale, and a lot of fans feel Richt didn't campaign the way Les Miles did.

What's your single favorite memory about that season for your team?

Brendan, USC: The 49-17 Rose Bowl victory over Illinois. While USC had been the previous year and has a historic past in the Rose Bowl, there was still something special about a Rose Bowl-record 633 total yards of offense. After the heartbreakers against Stanford and Oregon, it was great to see the Trojans win five straight.

The other is perhaps the most impressive win in modern Cal football history. Cal went toe-to-toe with a title contender in their home stadium. It's Cal’s only win in Autzen in the last 30 years, with a clutch defensive play from Marcus Ezeff and Dan Fouts losing his mind.

Collin, USF: I HAVE A MILLION. THIS IS SO HARD! I'll choose Matt Grothe's pass to Jessie Hester Jr. in OT to beat Auburn.

The roar from the thousands of Bulls fans around me, surrounded by dead silence in the rest of the stadium, was surreal. I silently wept for a few seconds. And then I went f'ing crazy and hugged about 75 percent of the people I truly love in this world.

A.J., Boston College: Without a doubt, it’s Matt Ryan's last-minute win against No. 8 Virginia Tech in Blacksburg, capped with a game-winning touchdown to Andre Challenger.

Billy, LSU: Walking out of Tiger Stadium after the absolutely epic LSU-Florida game. Just ... exhausted. Almost like I had played. I've never been in a game so tense, before or since.

Sean, Oregon: Beating Michigan in The Big House. Blowouts are fun, but this was even better. Dennis Dixon went off, handing the Wolverines their worst loss in 39 years.

Mike, Kansas: The Aqib Talib interview following the Orange Bowl, when he was asked about his 60-yard INT return for a touchdown. "I felt like Deion!"

Michael, West Virginia: Seeing the team rally around Bill Stewart heading into the Fiesta Bowl, then beating the Sooners when we should have never stood a chance. Who would have guessed that a team that just suffered an embarrassing loss to Pitt, ruining its shot at a national championship, and losing its head coach would beat one of the juggernauts?

Jeremy, Georgia: Unquestionably the "Blackout" game against No. 18 Auburn. After some early struggles, Georgia had smacked Florida in the "end zone dancing" game, which Urban Meyer long described as a "bad deal." The team had turned the corner, but needed a statement win and a little luck to get into the title picture.

The Bulldogs came out for warmups in their customary home red jerseys and silver pants. But fans came alive when the team emerged for kickoff in new black jerseys. It was the loudest Sanford Stadium has been in recent memory.

Even Verne Lundquist, Gary Danielson, and a national audience danced along to the dulcet tones of Soulja Boy's "Crank Dat (Soulja Boy)," the 2007 Bulldogs' unofficial anthem.

What was the dumbest thing that happened to your team?

Brendan, USC: Stanford. I wouldn't necessarily call it dumb, more along the lines of frustrating. A 41-point underdog in the Coliseum. The biggest point spread upset of all time. The Trojans had won 35 straight home games, going up against a team fresh off a 1-11 season with quarterback Tavita Pritchard making his first start. Haunts me to this day.

Avinash, Cal: Why do you hurt me.

Cal was 5-0, a touchdown away from being No. 1, and a field goal away from overtime. Cal would finish the regular season 1-6 as hobbled Nate Longshore took over, losing four of those six games in the final two minutes. Cal was probably not good enough to contend (the run defense was porous, and the offensive line struggled to get the run going), but was way better than the record.

Collin, USF: Losing at Rutgers via an "illegal forward propulsion" call was bad. Playing a disaster on Homecoming against Cincinnati was bad. But getting pasted by an Oregon team on its fifth-string quarterback in the Sun Bowl was really dumb. It is rumored that a lot of Bulls were, uh, less than focused during bowl week. And Juarez, Mexico was a big factor.

A.J., Boston College: After losing to FSU and getting knocked out of the No. 2 spot, BC laid a turd against a Maryland that didn't finish with a winning record.

Billy, LSU: Losing the Arkansas game in three overtimes. Arkansas was pretty good and had one of the best backfields ever, with Darren McFadden, Felix Jones, and Peyton Hillis. In overtime, LSU got Arky into a fourth-and-10 situation, game on the line. Bo Pelini rushed three, and Casey Dick had all the time in the world and scrambled long enough to find somebody. That was the game.

I cursed Pelini with the number four after, and it followed him to Nebraska, where he forever went 9-4.

Sean, Oregon: Not having a backup prepared to take over when Dixon went down. The Ducks used three different quarterbacks, none able to get a win or two to save the season. Justin Roper showed some life against Oregon State and USF, but by then, it was too late.

Mike, Kansas: The team went 12-1, so it's hard to come up with very many dumb moments. The whole year was dumb! But how about these, which were more crazy than dumb: Kansas was one of four schools that received at least one first place vote in the final AP poll, the day after the BCS Championship; Kansas and Hawaii were the only one-loss teams in the country; and Kansas football on the cover of Sports Illustrated after starting 11-0.

Michael, West Virginia: There's not enough time to really dive into this one, so I'll just make a quick list.

What player from your 2007 team do you still love the most?

The Trojans had to buy a set of 200-pound dumbbells for their weight room just to accommodate him. "Before, the heaviest we had were 160s," said Chris Carlisle, the Trojans' strength coach.

Avinash, Cal: Everyone was wondering if Forsett could hold the load with Marshawn Lynch graduating. Forsett ended up with the third most rushing yards in one season and the third leading rusher in Cal history.

Billy, LSU: DT Glenn Dorsey. At the time, the most-honored Tiger in my lifetime, and he should have been a Heisman finalist. Would have had an even better season if Auburn's Chaz Ramsey hadn't cheap-shotted him in the knee.

Sean, Oregon: Jeff Maehl became my absolute favorite. He eventually converted from safety to wide receiver late in 2007, a fantastic move. He was undersized, but the Maehlman always delivered.

Mike, Kansas: The easy answer here is QB Todd Reesing. Kansas fans don't need to hear more, but 2007 set a school record for total points, along with a slew of other records. (The defense wasn't too shabby, either, with current Denver Broncos Talib and Chris Harris at the corners to go with an unheralded linebacking corps and defensive line.)

Jeremy, Georgia: Knowshon Rockwell Moreno. If there's been a UGA player more fun to watch in the past 20 years, I don't know who it is. Statistically, he's been surpassed by a series of UGA tailbacks. But Knowshon's high-flying antics and live-wire energy were infectious.