Alternate history: What if West Virginia beat Pitt in 2007? 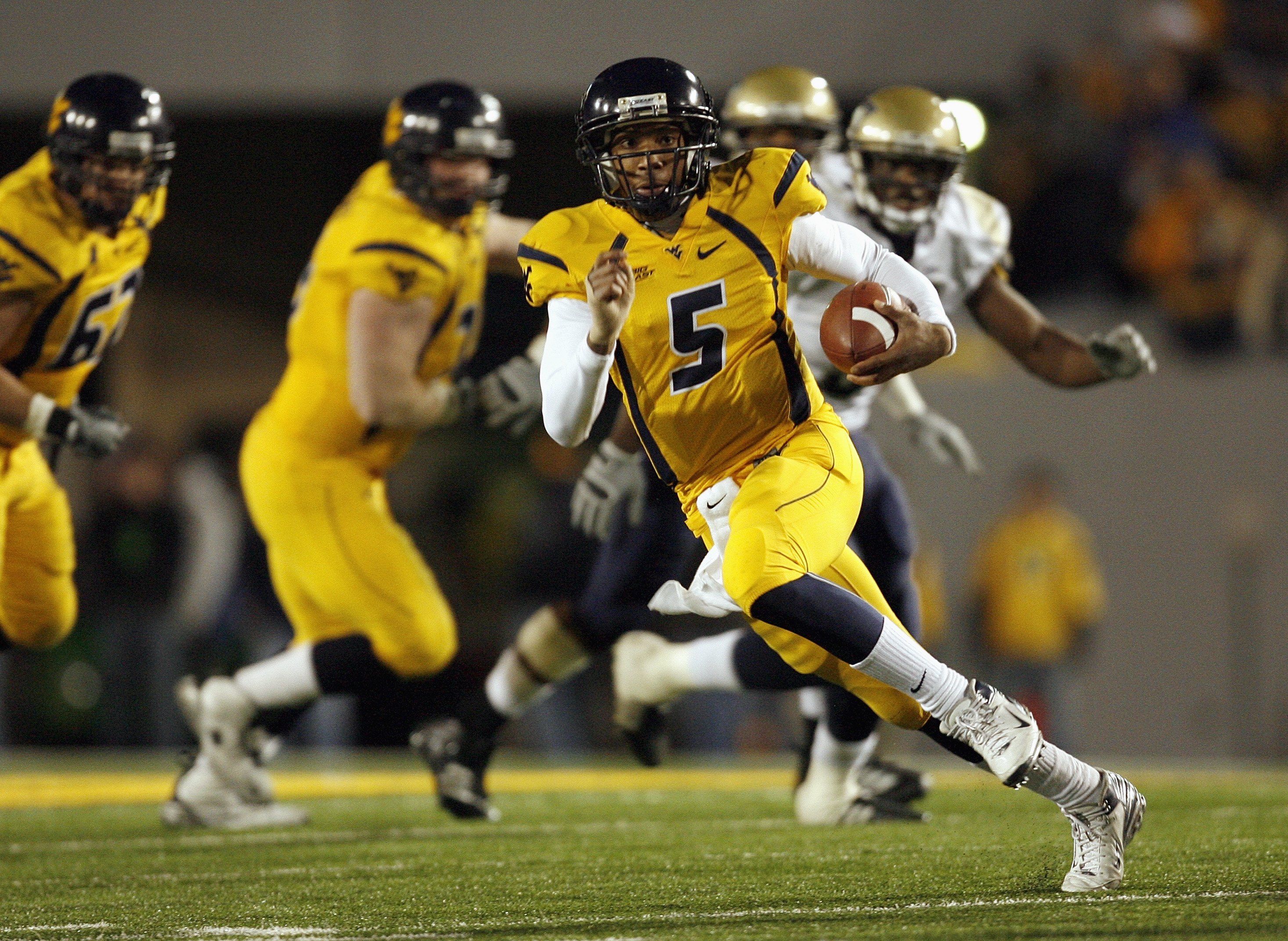 This is based on a chapter from Matt Brown’s book, "What If? A closer look at college football’s great questions," available at Amazon.

This was about more than just West Virginia missing a chance at holding a big trophy because its rival ruined their season. That’s unfortunate, but not unprecedented in college football.

What is remarkable is how the aftermath of this game changed the trajectory of, like, six major programs. Maybe even more.

West Virginia is one.

We’ll come back to WVU.

The Buckeyes had locked up the No. 1 spot in the BCS rankings, even though they had been upset by Illinois in their second-to-last game. They boasted the best defense in the country, via S&P+, but their offense was much less elite (22nd), and many commentators, even some in Columbus, suspected Ohio State’s ranking had more to do with the fact that nobody else could stay highly ranked more than two weeks.

With West Virginia losing to Pitt, there weren’t one-loss teams to match up against Ohio State. Kansas only had one loss but didn’t win its division. Hawaii was undefeated but played a gazillion time zones away from anybody who voted in the polls and beat mostly terrible teams in the WAC. Everybody else had two losses.

That means LSU is another.

The SEC champion, whose two losses came in triple overtime (against decent Kentucky and Arkansas teams), earned the other spot. The Tigers were excellent and a bad matchup for the Buckeyes. While there has been some revisionist history — helped by Florida blowing the Buckeyes’ doors off in the previous title game — LSU’s speed all over the field was superior to Ohio State’s. The Buckeyes didn’t have the offensive personnel to climb back from an early hole, and the Tigers won the title, 38-24.

If WVU beats Pitt, LSU can’t win the title that year because it’d be stuck in the Sugar Bowl. Assuming Pat White was healthy, this is a better matchup. Ohio State’s defense would have been better than anything WVU faced, but WVU’s skill talent was just as fast as LSU’s. S&P+ ranked West Virginia as the best team in the country (Ohio State was No. 4), and as much as it pains me to admit this, the Mountaineers might have been slight favorites.

(If you’re in Columbus, please don’t show anybody at the school that paragraph. I don’t want my degree taken away.)

So either Ohio State wins, erasing the narrative that the Big Ten was too slow to compete and changing Jim Tressel’s legacy. Or West Virginia breaks free, finally wins a title, and brings glory to the beleaguered Big East, which had suffered defections from power programs like Miami and Virginia Tech and whose future was in question.

Two weeks after West Virginia’s loss to Pitt, but before the bowl game, head coach Rich Rodriguez accepted the job at Michigan.

This would turn out to be a disastrous decision for Rodriguez. The Wolverines had run a pro-style offense for decades, and they didn’t have the personnel or the buy-in to make the transition to Rodriguez’s spread. There were cultural clashes, as Rodriguez alienated boosters with his lack of respect for Michigan traditions. Plus, Michigan culture is stiff and arrogant, and — I promise I’m saying this out of love — Rodriguez is kind of a redneck. It wasn’t going to work, and he was fired after three seasons.

But if the Mountaineers had won? They would’ve been playing for a championship! Would a hypercompetitive guy leave his team on the cusp of winning it all? That seems hard to believe, and it seems hard to believe that Michigan would have waited until January. WVU boosters had demonstrated a willingness to keep Rodriguez (they’d raised the money to keep him from bolting to Alabama), and with a title on the line, they would have found a way to keep him for at least one more season.

And Rutgers is here.

... and Rutgers head coach Greg Schiano, who would leave to coach Tampa Bay in the NFL. Either would have been vastly better fits for Michigan.

Still, either would have been unlikely to deliver a championship, given how badly Miles would struggle to develop quarterbacks after 2007, and if Schiano’s flameout with the Buccaneers demonstrated what kind of coach he was.

West Virginia was hot on the trail to sign Terrelle Pryor, a five-star quarterback out of Jeannette, Pa., and the top recruit in the country, according to Rivals.

He would have been a perfect fit for Rodriguez’s offense. Pryor was 6’6 and skilled enough to earn D-I offers to play basketball. He had the size and strength to fight through tackles, but was fast enough to break through the open field. He was the evolution of White, and in an offense built around his skill set, rather than forcing him to be something he wasn’t, he could have been devastating.

Pryor agreed, and had WVU as one of his five finalists, with many thinking the Mountaineers were the favorites. If WVU was coming off a potential title, with a coach best positioned to take advantage of Pryor’s gifts and Pryor’s familiarity with the campus, it seems reasonable to think WVU would have secured his commitment.

But after Rodriguez left, Pryor eliminated the Mountaineers and added Michigan instead. After an especially long process, he made a surprising choice: Ohio State.

By any statistical measure, he’d go down as one of the best in Ohio State history. But Pryor happened to be the face of a scandal that would bring down Tressel and strip the program to its foundation.

Pryor, along with four other players, traded memorabilia for tattoos and money. Tressel was informed via an email but declined to inform his superiors, a crime worse than the scandal, in the eyes of the NCAA. Tressel was forced to resign, Pryor left for the NFL supplemental draft, and four players were suspended. The shorthanded Buckeyes went 6-7.

So did Pitt-WVU lead to Urban Meyer vs. Jim Harbaugh?

That paved the way for Ohio State to hire Meyer, who built an even more powerful dynasty.

Rodriguez’s failure at Michigan led to the school reversing course and hiring native Brady Hoke, then making the better version of that hire by landing Harbaugh.

Imagine WVU’s future with a title, Rodriguez, and Pryor.

I can’t help but think Pryor would have had an easier ride at West Virginia. There would be no awkward schematic fit. He’d have a sympathetic fan base, one less predisposed to take star recruits for granted. His schedule would have been way weaker. Paired with Noel Devine and facing late-2000s UConn, Syracuse, and Louisville? Pryor could have won a dang Heisman Trophy.

A title, then a Heisman a few years later, would have been huge for West Virginia, given where the program was in the late-2000s.

2007 was probably the high-water mark for the whole Big East, in fact.

So Pitt-WVU impacted an entire conference.

Rutgers, UConn, USF, and Cincinnati had strong seasons, but depth didn’t hold, and the conference lacked a true elite. But if Rodriguez had stuck around, West Virginia is likely a perennial top-10 squad, boosting recruiting for not only West Virginia, but for other conference programs.

Would this have saved the Big East? Probably not. No matter how many games West Virginia won, it wasn’t going to make Morgantown a major television market or make the league more attractive for Syracuse and Pitt, who were the next programs to leave ...

And that means Pitt-WVU impacted the ACC, Big 12, and others as well.

... but it would put WVU in a dramatically better position for realignment. If WVU is at the peak of its powers, could it overcome its TV market and research deficiencies to earn an ACC invite, instead of joining the dysfunctional and remote Big 12? Or would it have built up infrastructure to better compete in the Big 12?

In a year of improbable upsets, perhaps none was as far-reaching as the 100th Backyard Brawl. It swung the title game, altered the narratives of WVU, LSU, Ohio State, and more; might’ve determined the coaching fates of WVU, Michigan, LSU, Rutgers, or others; and had realignment implications.

The Panthers would win 27 games in Dave Wannstedt’s next three years, but wrecking archrival WVU’s greatest season ever made the Panthers the biggest winners here.