The Wildcat offense was a fleeting football fad, but it has a legacy to this day 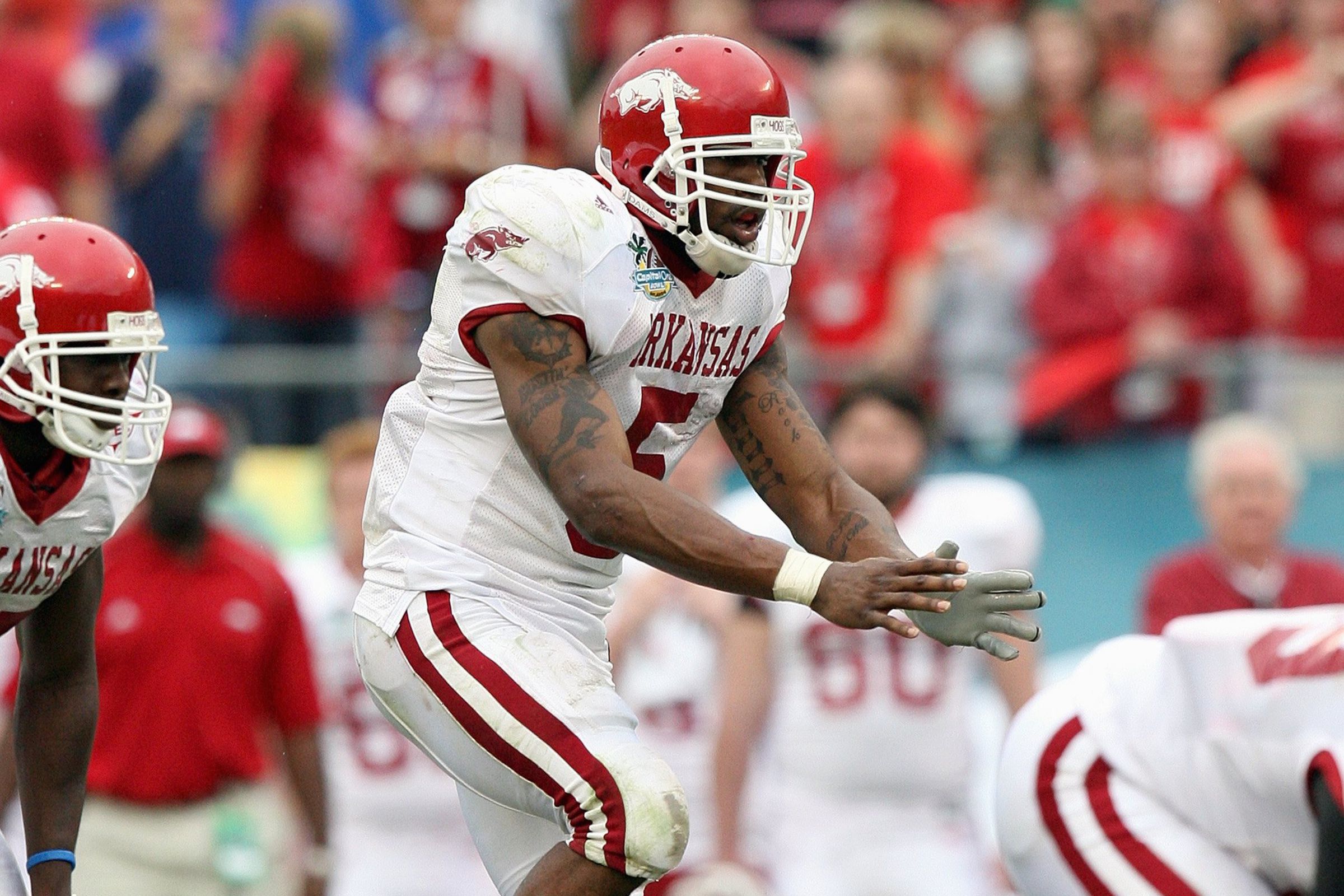 The Wildcat offense’s moment in the NFL spotlight began in 2008, when the Dolphins used it to destroy the Patriots the season after they’d gone 1-15 and New England went 17-1.

Dolphins coach Tony Sparano became one of the few to totally catch Bill Belichick off guard. Because of this loss, New England missed the playoffs by one game, its only absence since 2003. The Dolphins offense rose from No. 28 to No. 12 in yardage and made the playoffs out of nowhere.

The Dolphins offensive coordinator who’d installed the Wildcat was David Lee. A year before, in 2007, Lee was Arkansas’ QB coach. That’s the place where the story of the Wildcat’s mainstreaming really starts.

The latter made the team as a kick returner. Also a consensus All-American was their center, Rimington Trophy winner Jonathan Luigs. Fullback Peyton Hillis could carry, catch, and had even returned kicks as an underclassman.

Arkansas wasn’t a great team in 2007, when it went 8-5 and lost a Cotton Bowl blowout to Missouri. But the Hogs were a well-oiled running machine. They beat eventual national champion LSU, 50-48, in a game that saw McFadden run for three touchdowns and throw for another. As a team, Arkansas had 385 rushing yards on 53 attempts.

"It's hard to describe the feeling of panic that overcame you when Arkansas lined up in the Wildcat set with McFadden and Felix Jones," LSU writer Billy Gomila said.

"I felt like [the defense] would have some violation with their eyes, and they would slow down," former Arkansas head coach Houston Nutt told SB Nation. "When you have Felix Jones coming across in fast, lightning motion, it slows them down. And then they had to respect that. And then they had to respect the fact that [McFadden] could hand it, he could throw it to Marcus Monk or Peyton Hillis, or he could run it."

"‘Put him in the Heisman!'" Arkansas Fight manager Don Harper said of McFadden. "I remember just wishing they'd snap the ball directly to him on every play."

The Wildcat is an offspring of the 20th century’s single-wing offense.

Popping up in fits and starts at all levels of football before Arkansas, the Wildcat uses an unbalanced line, which means the center isn’t right in the middle of it. It puts a running threat in the QB’s spot, often keeping the QB on the field as a decoy and then sending him out wide.

Some quarterbacks, like Arkansas’ Casey Dick (No. 11), took to that part.

For other QBs, the arrangement was awkward.

In 2006, Nutt had hired a high school coach named Gus Malzahn as his offensive coordinator.

Malzahn, now Auburn’s head coach, walked into a favorable situation. His top three backs would each go on to have 1,000-total-yard NFL seasons.

With Malzahn drawing up the plays and stars executing them, the Razorbacks made the Wildcat a bona-fide thing on the national stage. Arkansas used it as a sub package to devastating effect, with McFadden taking a shotgun snap, Jones motioning or starting next to him, and the quarterback out wide. (Miami would later use Ronnie Brown in the McFadden role and Ricky Williams in the Jones role.)

This was Arkansas, so the formation was called the "Wild Hog."

Malzahn left Arkansas after 2006. He and Nutt weren’t an ideal fit (nor, it'd turn out, was Nutt himself). But while Malzahn was at Tulsa, the Wild Hog kept shredding defenses. McFadden totaled 1,994 scrimmage yards and 17 touchdowns in ‘07, again winning the Doak Walker Award as the country’s top RB. Jones went over 1,300 scrimmage yards and scored 11 times.

Here’s a diagram from Malzahn’s 2007 scheme installation book at Tulsa, with the Wildcat looking just as it did during his time in Fayetteville:

Note the unbalanced line, with three linemen to the right of the center and one to his left. The tight end is an eligible receiver in the rare event of a pass out of this set. As a passer, McFadden was 14 of 22 for 205 yards, seven touchdowns, and one interception during his three seasons in Fayetteville.

McFadden and Jones were so good that the Wildcat became further entrenched as a viable formation.

2007’s champions couldn’t stop it, in what now feels like a precursor to how badly the Dolphins befuddled the defending AFC champs in ‘08.

The GIFs in this post are of McFadden toasting LSU with roughly the same play in 2006 and 2007. Elite defenses couldn’t figure the Wild Hog out.

Since the 230-pound freshman was a QB, his appearances in relief of traditional passer Chris Leak didn’t count as Wildcat snaps. But putting a change-of-pace, multi-threat athlete under center strained defenses in similar ways.

It also prepped Tebow for his 2007 Heisman year, when he’d top McFadden.

"It really helped with a pressure-packed situation," he tells SB Nation, "because as a freshman, the majority of the plays that I played were third down, fourth down, goal-line, red zone plays that were super impactful for the game. So having to run in on a fourth-and-1 or a third-and-3 or at the goal line and in the red zone, those are huge situations where you have to deliver it. Whether it was the different plays vs. Tennessee or LSU or Alabama, FSU, those big moments. Honestly, sometimes it’s easier when you’re in the flow of the game, so it helped me with the mental preparation on the sidelines, running in for one play, back and forth."

The Dolphins formalized their attachment to the scheme when they drafted West Virginia quarterback Pat White 44th overall in 2009.

White’s college coach, Rich Rodriguez, created the zone read out of a broken practice play years earlier. The Wildcat already put two running threats in the backfield, so adding a dual-threat QB looked like the next level.

Plenty of coaches didn’t think the Wildcat was a fad.

"When we face a traditional offense, you don't account for the quarterback [as a ball-carrier]," then-Falcons coach Mike Smith said in 2009. "Basically, in the majority of schemes, [defenders] want the quarterback running the football because you get an opportunity to hit him.

"That's why when people play against the run with an eight-man front, you have an extra defender that's unblocked. Now, they're giving the snap to someone who can distribute the ball with a handoff but also can run the ball, so you get a disadvantage on defense in terms of the numbers."

The Wildcat failed to stick at the pro level.

In White’s rookie season, he threw five passes and completed none. He played sparingly, with 21 runs for 81 yards. In the last game of the season, he took a brutal hit to the head and never played another down in the NFL. After 2008, the Dolphins wouldn’t have a winning record until 2016. If White was ever going to be the guy to make the Wildcat stick in the pros, his opportunity evaporated.

Few NFL or major college teams have run the Wildcat with regularity since those days, though plenty have tried special packages based around specific athletes. The Jets tried out Tebow in a Wildcat-like arrangement for a while.

When teams do run it these days, it’s usually rare, unexciting, and inefficient. Now, the Wildcat is often an indicator that a team has run out of ideas.

But the Wildcat turned out to be a precursor.

Especially in the high school and college games, teams have gravitated toward run-pass options that give a mobile QB the choice to hand the ball off, run, or toss it off to a receiver. The Wildcat often had a give/keep read built in, like in both of those long McFadden runs up above, and Wildcat RBs were often asked to throw.

In 2013, Malzahn’s Auburn hit Alabama with what stands as the most famous RPO of all time. Especially considering QB Nick Marshall was a converted DB, it was Wildcat-esque.

Modern RPOs aren’t necessarily operated out of unbalanced formations, and the guys getting the snaps aren’t technicallyrunning backs. But the Wildcat sought to create a numbers advantage by giving the offense an extra potential ball-carrier. That’s only become more of a priority as time has gone on.

The Wildcat didn’t have a long time in the spotlight, but pieces of it will live forever.