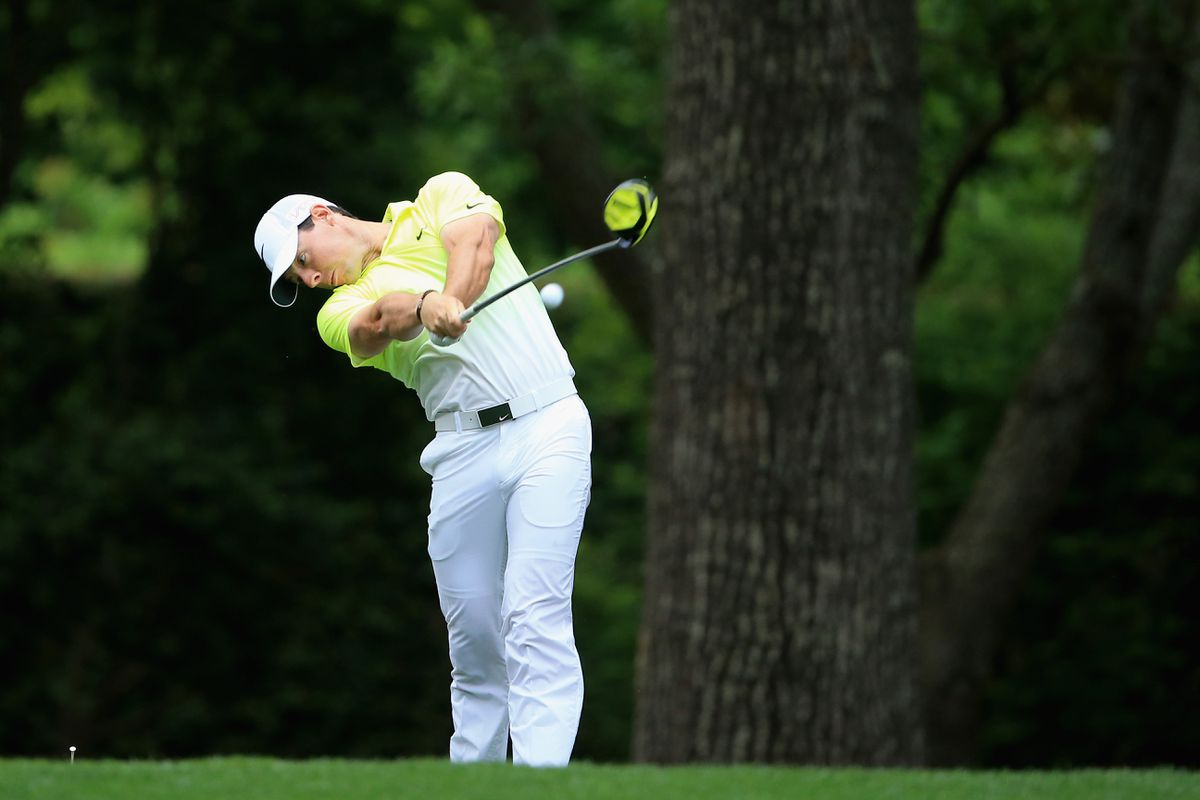 Can ‘pissed off’ Rory McIlroy blast his way to the career grand slam?

As Rory McIlroy heads to the first major of the 2015 season, his year-to-date plays out like (with apologias to Dickens) A Tale of Two Golfers.

It was the best of times.

It was the worst of times.

Indeed, what to expect this week from the four-time major winner, as he attempts once again to complete the career grand slam at Augusta, is anyone’s guess. Including his own, perhaps.

“Yeah, up and down. It’s been the story of the week and sort of been the story of my year, as well,” McIlroy said after a disappointing T27 at the Arnold Palmer Invitational in March. “I’ve played some great golf and not great golf. … Lot of birdies, lot of mistakes, but I need to figure it out going into Augusta.”

McIlroy lost to eventual winner Jason Day in the semifinal round of match play in his final start before the Masters. Now. he’ll head down Magnolia Lane with a second straight chance to earn the only major title missing from his impressive 11 PGA Tour-winning resume. Should he succeed, he would join an elite club of just five members who have prevailed at all four professional major tournaments: Tiger Woods, Jack Nicklaus, Ben Hogan, Gene Sarazen and Gary Player.

While the pressure to nab that last elite major may be causing efforts that McIlroy at the WGC-Dell Match Play termed “scrappy,” there’s a reason why oddsmakers heavily favor him to have a green jacket tailored to his buff 5′9, 160-pound frame.

Forget for a moment his on-again, off-again performances leading up to Augusta. You can’t help but recognize that after a sloppy, 3-over 40 on the front nine of the second round of last year’s contest, McIlroy went on a scorching, 15-under tear in his final 45 holes. Is that just who Rory is, running hot and cold? And when he dodges the cold front, he wins the U.S. Open and PGA Championship with record scores and margins.

Before that, he had pretty much put that Sunday 2011 meltdown behind him, when he imploded to the tune of a final-round 80, as well as the 77-76 on the weekend the following year that resulted in a T40. There was that 79 on Saturday in 2013 that knocked him out of contention, but since then he seems to have figured out what it will take to keep Jordan Spieth from defending his 2015 title.

“This is going to be my … seventh, eighth time [eighth, for the record] going to Augusta, and I feel like I’ve improved each and every year,” he said before a T3 finish at Doral last month. “I feel like I’ve been there enough to know … what I need to do to win at Augusta. I know what the game plan is.”

Which is not to say it will be a stroll down the spectacularly manicured fairways for McIlroy, who faces some notable trouble spots across the layout. Right off the bat, he has never birdied the par-4 first hole in any of his seven starts. Indeed, he is 8-over for his career on No. 1, an extremely taxing opener that ranked among the four hardest holes in relation to par nine times of the past 10 years.

No doubt that game plan come April 7 will be to continue capitalizing on his length and attack the par-5s. After compiling a combined 19-under on the long holes between 2009 and 2014, McIlroy crushed them to the tune of 14-under in 2015. Not coincidentally, McIlroy’s fourth-place finish was his best yet at Augusta.

“I feel the biggest thing for Au­gusta with me was playing the par-5s well,” McIlroy recently told Augusta.com.

Another big bopper, Bubba Watson, knows how critical it is to bend the par-5s to one’s will. Watson won his second green jacket in 2014 by going 8-under on them. McIlroy, by contrast, played Nos. 2, 8, 13 and 15 at even-par for the tournament.

While conquering the par-5s, McIlroy has similarly made peace with the par-4 10th — the beginning of his undoing in 2011, when his drive ended up near some cabins in a previously unexplored part of the course and he walked away with a triple-bogey.

Since that head-shaking start to his back nine five years ago after entering the finale with a four-shot cushion, McIlroy has played his personal Waterloo at 2-over in 2012, 1-over, 1-under and 1-under.

McIlroy’s agenda may also include more than what happens physically between the ropes. There’s an ongoing anger-management issue that could thwart his goals or, perhaps, advance them.

“These high scores, I know it’s nothing to do with my game,” he said following a closing 7-under 65 that came on the heels of a third-round 75 at Bay Hill. “It’s more mental. I’m beating myself up over mistakes that I’m making on the course and then I’m not letting myself get over it so that it sort of lingers there for the next few holes … I need to stop doing stuff like that.”

Match play seemed to be the cure-all for those weighty psychological issues that have plagued McIlroy over the course of his career. Until, that is, his new putting grip let him down at the same time that he ran into the Jason Day buzz saw in Austin. His 1-up defeat at the hands of the new world No. 1 left him as exasperated as he was after those dual 75s (first and third rounds) at Bay Hill.

“A little bit pissed off,” McIlroy said after bowing to Day and before putting in a seemingly listless effort in his consolation-round loss to Rafa Cabrera-Bello. “I’m not angry with my game, at all. I’m just angry that I didn’t do more in the match and convert my chances when I could have.”

Berating himself for mental errors is nothing new for McIlroy. During his lost season of 2013, he proclaimed himself “brain dead” after a first-round 8-over 79 at The Open.

“I wish I could stand here and tell you what I need to do to put it right, because I feel like I’ve got the shots,” McIlroy said at the time. “You’ve just got to try to play my way out of it but it’s nothing to do with technique. It’s all mental out there.”

Perhaps now, as he hinted then, a quick tuneup with Bob Rotella would help. With McIlroy continuing to contend that his play is Augusta-ready, though, a session with the noted sports shrink is probably not part of the pre-Masters deal.

In fact, McIlroy believes if he can just curb his temper, his natural skills will take over.

“I feel like my game is in great shape,” McIlroy added. “More mentally than anything else. Just need to try to get over it quicker and rebound and not — just not be so hard on myself or sort of get so angry.”

Or, maybe let the heat of the moment work to his advantage. McIlroy claimed that’s exactly what he did during the match play event two weeks ago. He conceded he was “a little annoyed” after three-putting the ninth green and giving Chris Kirk some life in his quarterfinal match. He then went on a 4-under run in his next six holes to put Kirk away, 4-and-3.

“Mentally, if I do get down on myself at any time in my matches,” he said after downing Zach Johnson on day four of match play, “that’s when … I play my best golf.”

If McIlroy truly believes that, the rest of the field at Augusta has been put on notice: beware the furious golfer.