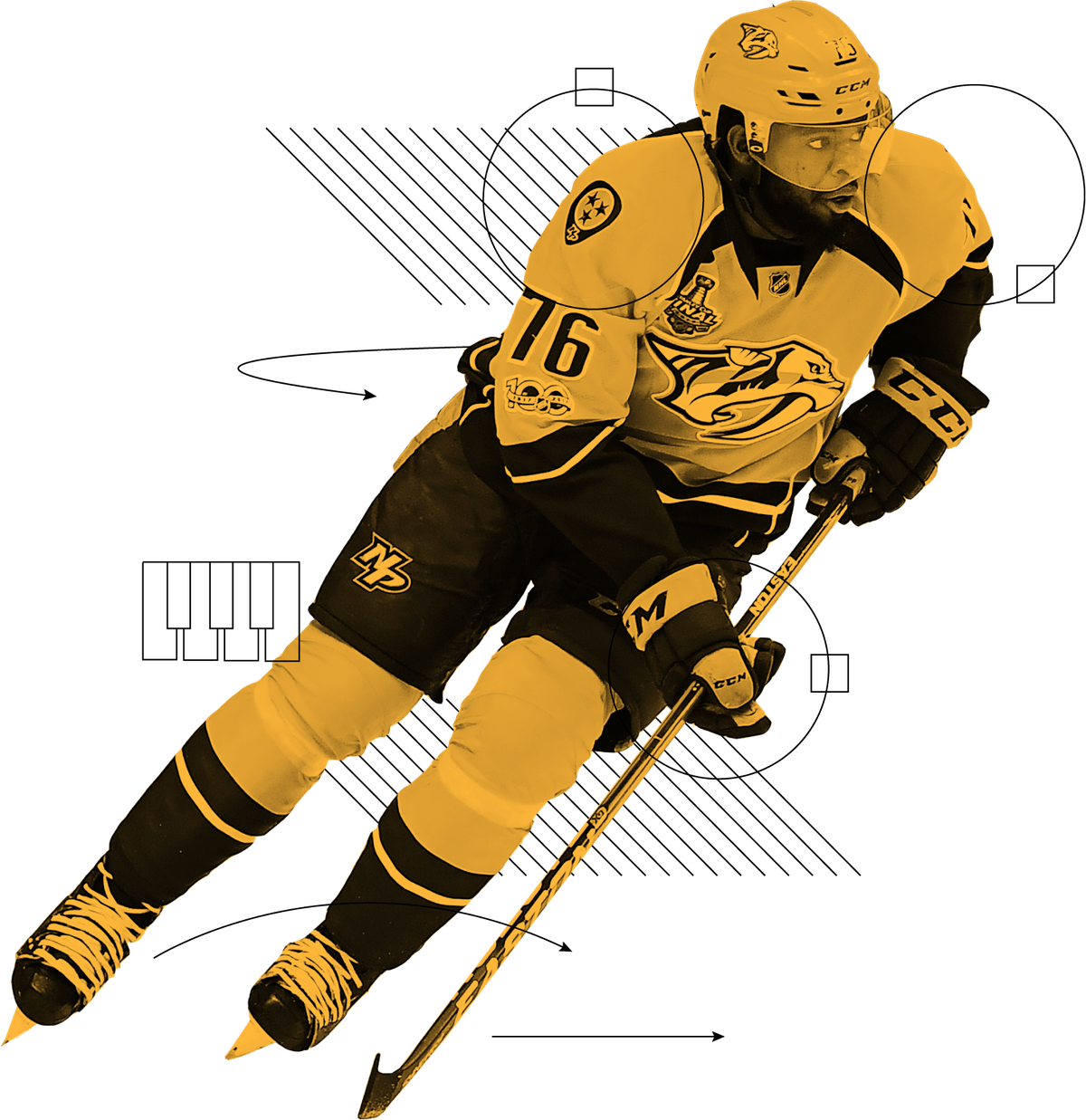 The fearsome foursome of P.K. Subban, Roman Josi, Ryan Ellis, and Mattias Ekholm is back. The Nashville Predators rode a great defense to the Stanley Cup Final in the spring, and they’ll be looking to do the same again this season.

The only question is whether they did enough during the summer to pull that off, especially with Ellis on the mend to open the season. The Predators look as daunting as last year, but they didn’t do much to take this team to the next level. Luckily, they’re starting from a great place.

Defense will again be a major strength for Nashville, which nearly rode Subban, Josi, Ellis, and Ekholm to a Stanley Cup last season. It was a coming out party for Smashville as an underrated hockey town. It was a big month for catfish.

The Predators also have a stellar top line of Ryan Johansen, Filip Forsberg, and Viktor Arvidsson, and 2014 first-round pick Kevin Fiala will be looking to break out after splitting last season between the AHL and NHL. The biggest question mark might be in goal, where Pekka Rinne’s streakiness can create as many problems as it solves.

Still, Nashville is one of the teams to beat in the West this season. If defenses win championships, the Predators have what it takes.

Questions&AnswersWith Katherine Rice from On the Forecheck

A lack of center depth helped cost the Predators the Cup back in June. Have they improved it?

Mike Fisher, at 37, was still a good third-line center filling in adequately on the second line. He turned in a 42-point season last year despite missing 10 games to injury. He might have been due to regress, but replacing him with Nick Bonino, who’s only ever had a season that productive once, doesn’t seem great. It’s also fair to look at Bonino’s -4.9 CF%rel last year, compare it to Fisher’s -1.1, and worry — on the other hand, there’s some evidence that Bonino’s on-ice shot troubles were a reflection of his play with Phil Kessel, and wingers who are all offense isn’t a type the Preds are noted for. Overall, assuming he comes back fully healthy from his broken leg, Bonino is probably an adequate replacement for Fisher.

The problem is that the Preds need to be able to reasonably hope for better than 35 points or so from their second-line center. Like Bonino, Calle Järnkrok is not going to be that guy. His impact on shot share is better than Bonino’s or even Fisher’s, but he does it all with shutdown defense, not with effective offense. Colton Sissons has little NHL track record and looks like a fourth-liner in what we have seen. He stood out after Ryan Johansen’s injury in May, and when the stakes are higher the play is much more memorable, but the rest of his career has been much less exciting. Vladislav Kamenev and Frédérick Gaudreau are even more unknown quantities, Gaudreau’s stunning performance in the Cup Final aside. It’s possible that Sissons, Gaudreau, or Kamenev might be an internal solution to the center problem, but after Johansen the outlook is bleak.

What will the team do without Ryan Ellis?

The full extent of Ellis’ injury in Game 5 of the Stanley Cup Final was a mystery until a few weeks ago, when it was revealed that his offseason knee surgery would keep him out of the lineup until January. For many teams, losing a second-pairing defenseman wouldn’t be that big a deal. Unfortunately, for the Predators, the defense corps is both the identity and the greatest strength of the team, and Ryan Ellis is an important part of that.

Last season the team struggled defensively for the first month and at occasional intervals through the rest of the season. Some of that might have been chemistry issues as players adjusted to Shea Weber’s departure and P.K. Subban’s arrival (and Subban adjusted to a new and very different system); if so, we might see more of the same this year. GM David Poile said that the timetable for Ellis’ return was part of the reason he traded for former Canadiens defenseman Alexei Emelin. Unfortunately, Emelin shoots left and Ellis shoots right, so it probably won’t be as simple as a one-for-one substitution allowing the rest of the defense corps to continue with players they’re comfortable with.

When Ellis missed time to injury last year, Matt Irwin joined Roman Josi on the second pairing and it worked out pretty well. Subban could stay with Mattias Ekholm — they were amazingly effective together last year — or that pairing could be split up, putting either one of them with Josi. It looks like both those options have been getting a look in camp and the preseason. The one thing every temporary solution has in common is that Ellis, who played almost 24 minutes a game last year, is going to be replaced for half the season by a worse player. The Preds will need to find a way without him.

Is the goalie situation stable enough for a strong season and good postseason run?

Pekka Rinne turns 35 less than a month into the season. He plays a very active and physically demanding style instead of relying on forethought and positioning to make saves, which means that fatigue has a really noticeable effect on his game. He has very little middle ground — he’s either very good or very bad. The best way for the Preds to improve their chances of getting Good Rinne on any given night is to allow him frequent rest by giving his backup regular starts. This isn’t something head coach Peter Laviolette has typically done with his goalies on any team, and a lack of strong alternatives to Rinne in Nashville has left him carrying the load mostly alone for years.

Enter Juuse Saros, a 22-year-old seen as the organization’s future in goal. He put up a .923 SV% in 21 games in Nashville last season and a .934 SV% with Nashville’s AHL affiliate. His numbers with Finland’s U18 and U20 teams are fantastic, and in two appearances with Finland’s full team at the IIHF Worlds he has yet to allow a goal. His positioning is good and he reads plays very well. He’s also listed at 5’11 on the NHL roster and 5’10 on the latest international one. For any incredibly promising young goalie, there’s always the risk that they have an Achilles heel that just hasn’t been discovered yet. For Saros, his size could prove to be an issue even if there’s no single weakness to his game.

Saros struggled toward the end of last season and into the playoffs, but that could just be an adjustment period as other teams got more game tape on him. That’s also common for young goalies. If he can adapt and Rinne has another year left in him, this tandem could take the Preds a long way.