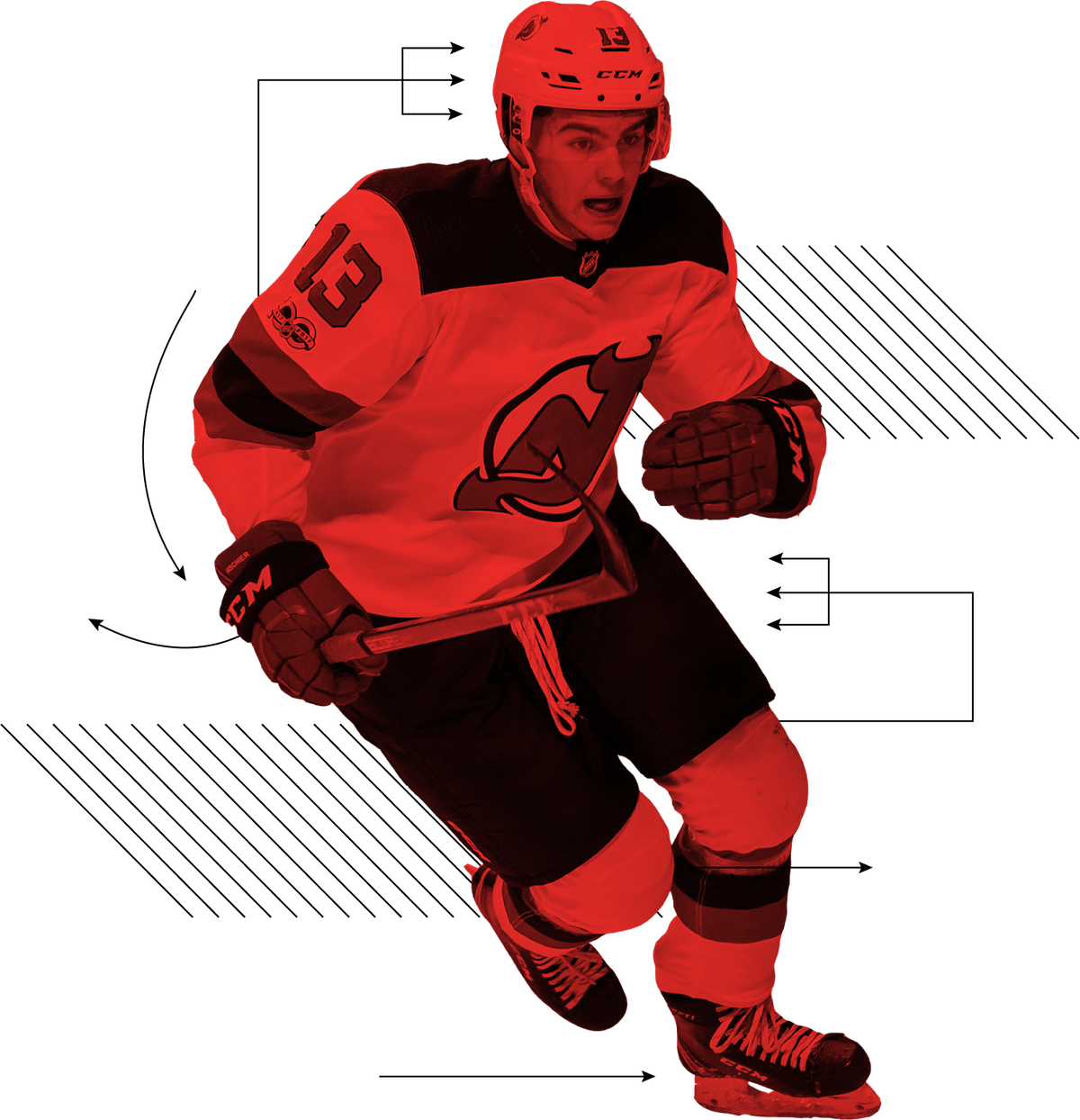 Our brief glimpses of Nico Hischier in the preseason has us ready to see what he can do full-time in the New Jersey Devils lineup. After the Devils were gifted the No. 1 overall pick in this year’s draft, the addition of Hischier has kick started New Jersey’s miniature rebuild.

They will need him too, as Travis Zajac will be out four to six months due to injury. Due to need, Hischier will likely get time to shine as the Devils’ biggest offseason prize. Another fresh face will join the Devils this year, as defenseman Will Butcher chose New Jersey after spurning Colorado out of college. Butcher will be able to slot right into the Devils’ system, alongside another recent offseason acquisition in Mirco Mueller.

Cory Schneider didn’t have the strongest of seasons for the Devils last year, so if improvement is to be had it will have to start from the goaltending position.

There are a lot of heavyweights above the Devils in the projected standings, but a mix of emerging talent and old stalwarts like Adam Henrique, Kyle Palmieri, and Andy Greene will give the Devils a new look for the upcoming season.

Questions&AnswersWith John Fischer from All About The Jersey

Will the New Jersey Devils blueline be better than last year?

Last season was a rough one for the New Jersey Devils and one of the big reasons why was the play of the defensemen. While the Devils remained a low-event team in 5-on-5 play, the Devils were not their stingy selves. According to Ntural Stat Trick, their Corsi Against per 60 minute rate was the ninth-lowest in the NHL at 53.62 but their shots against per 60 minute rate was the 10th-highest in the NHL at 30.34. That was just 5-on-5 play.

Special teams were a drag defensively, too. The Devils' success rate on the penalty kill finishing in the bottom third of the league at 79.6 percent. The Devils' power play conceded 12 shorthanded goals, the most in the league. The defensemen to a man were short on talent and long on issues from John Moore's tendency to concede a lot of shots, to Ben Lovejoy's lack of offense, to John Hynes and his staff somehow keeping the young and talented Damon Severson away from Andy Greene as a pairing that might be able to go in both directions. With so many botched first passes and zone exits by clearances, the poor defensive play hindered an already-weak offense

On paper, there is not a lot of reason to think the blueline became better. They traded for Mirco Mueller, who struggled in the AHL last season. They did not sign any other NHL defensemen; they did not obtain Kevin Shattenkirk's services. They did not change their coaching staff other than goaltending coach. The Devils were able to sign Hobey Baker Award winning defenseman Will Butcher and secure Severson to a long term deal. However, preseason has been promising for several defensemen. Severso was often a standout experienced player, which says a lot given that he is only 22. Butcher has been given the opportunity to be the sole defenseman on a power play and has played a lot in the games that he has played. Steve Santini, Mueller, and even Dalton Prout has played rather well, showing the viewers that they can be mobile, handle the puck well, and not make dumb decisions in their own end. The only disappointment among the expected NHL defenders in preseason has been Lovejoy, who continues to struggle against speedy players and does not contribute to the play going forward. It may be preseason but it is evidence that all is not immediately lost.

A lot has to go right for the Devils to return to their ways of being a team where getting a shot on net is akin to crawling on wool in the Summer heat. First, the coaches have to put players in positions to succeed and with partners they can play well with in both directions. Greene and Severson can do this; Greene and Lovejoy could not last season. Second, there has to be continued improvement from the younger players. Severson is solid enough, but showing he can hang with tough competition would be a big help as Greene gets older. How well Mueller, Santini, and Butcher play would go a long way to determining whether the blueline is trending upwards towards greatness or may force general manager Ray Shero to re-consider the status of the whole position. It would be crucial also to minimize the effects Moore and Lovejoy could have. It's a lot to ask for and it may not be enough for the Devils defense to be a hallmark once again this season. But with some tweaks and development of younger players breaking the right way, there could be some improvement of last year's struggle.

Last season, the answer was no. Despite adding Taylor Hall, the top six was — when everyone was healthy — Hall, Travis Zajac, Kyle Palmieri, Adam Henrique, Michael Cammalleri, and a sixth player to be named later. Cammalleri performed poorly and was eventually bought out. Henrique struggled with a rotating cast of forwards. Wingers included but were not limited to Pavel Zacha, Beau Bennett, Joseph Blandisi, and Miles Wood. It did not quite work and that made it easier for opposing teams to match-up and perform against the Devils forwards. Throw in injuries keeping players at points and it was even easier.

This season, the answer is: they just might. Even Travis Zajac out for four to six months with a torn left pectoral muscle, the Devils may be actually able to ice two lines that could threaten on offense. Hall, Palmieri, and Henrique return. Shero was able to help Washington's salary cap by acquiring Marcus Johansson, who is a big get for the Devils. Johansson can play all three forward positions and handle many different situations well. He absolutely makes the Devils forward group stronger up front. While he is coming off a poor season, Drew Stafford has been very good in preseason between his pin-point passes and strong shots. The right winger can definitely take a spot and fit in the center of a power play unit.

There are two other forwards that will be in the top six at points throughout the season and they could make this group really good depending on how they develop. They are Zacha and 2017 first overall pick Nico Hischier. Zacha was thrown right into the NHL last season and took his lumps, largely playing at left wing. With the Zajac injury, Zacha was moved back to center and has been emergent in preseason. He has been quicker, more aggressive, more resolute, and better on and off the puck. He could breakout in a big way. Hischier was dominant for Halifax last season and beat out Nolan Patrick for the first overall pick. He has been as good as advertised so far in his young professional career. Hischier is fast, he has great hands, he has been very good on defense — which is not common for an 18-year-old forward prospect, and he has been more than willing to go into the "dirty" areas to win pucks, make plays, and even score a few goals. He actually has star potential, something one could not say about Devils prospect since perhaps Zach Parise. Zacha and Hischier will likely be in the mix of the top two lines throughout the season. Should they progress from what they showed from preseason, then the Devils could have a legitimate top-six group of forward even before Zajac returns in 2018. That is definitely a reason to be excited for this season.

As a rebuilding team, how should the Devils approach this 2017-18 season?

How should they approach this season? This is a big-picture question that has a direct impact on a lot of the smaller, but important questions facing the 2017-18 Devils. In this season, head coach John Hynes is entering the final year of his contract. After an overachieving 2015-16 campaign and a miserable 2016-17 season, does he stay or go if the 2017-18 team does not make much progress? The Devils currently have Taylor Hall turning 26, Henrique and Johansson on the books for another year after this one, the team locked up Severson but a 33-year-old Andy Greene remains the leader, Cory Schneider turning 32, and a growing group of prospects. There is a real feeling that the time for several important Devils is now; another lost season to the rebuild loses a season for them. Even if the eventual high first round draft pick is a great player, is it worth another soft tank?

There is also a business component to this. The Devils have not made the playoffs since 2012. While some fans will still come out and pay the increased ticket prices for games, fans are not stupid. Even if they endorse the rebuild as a code for "tank until the young stars align on the roster," they are not necessarily going to pay to see it live at The Rock. After a depressing second half of 2016-17, which ended with just three wins in their final 24 games, it is only fair to expect some kind of progress. If only to show that the team is actually building towards something. Making matters worse is that the Metropolitan Division remains one of the toughest, most talented (especially in net) groups in the league. The Devils could very well "go for it" and still end up in eighth.

The owners and Shero really know the answer to this question. From this standpoint, they should do right by the fans who have endured these lean years. There is an appropriate level of hype surrounding Hischier, Zacha, Jesper Bratt, and a preseason that at least showed the Devils may not be as soft of an opponent as they were last season. While the defense remains a big question mark, there could be some real improvements at forward. Add in a bounce-back season from Cory Schneider — really just better luck on special teams would do it — and the Devils could show some real progress ahead of a crucial 2018-19 season. They may still be sellers at the trade deadline and will still likely end up in eighth place. But it will be less likely that they are a relatively easy two points for most opponents.