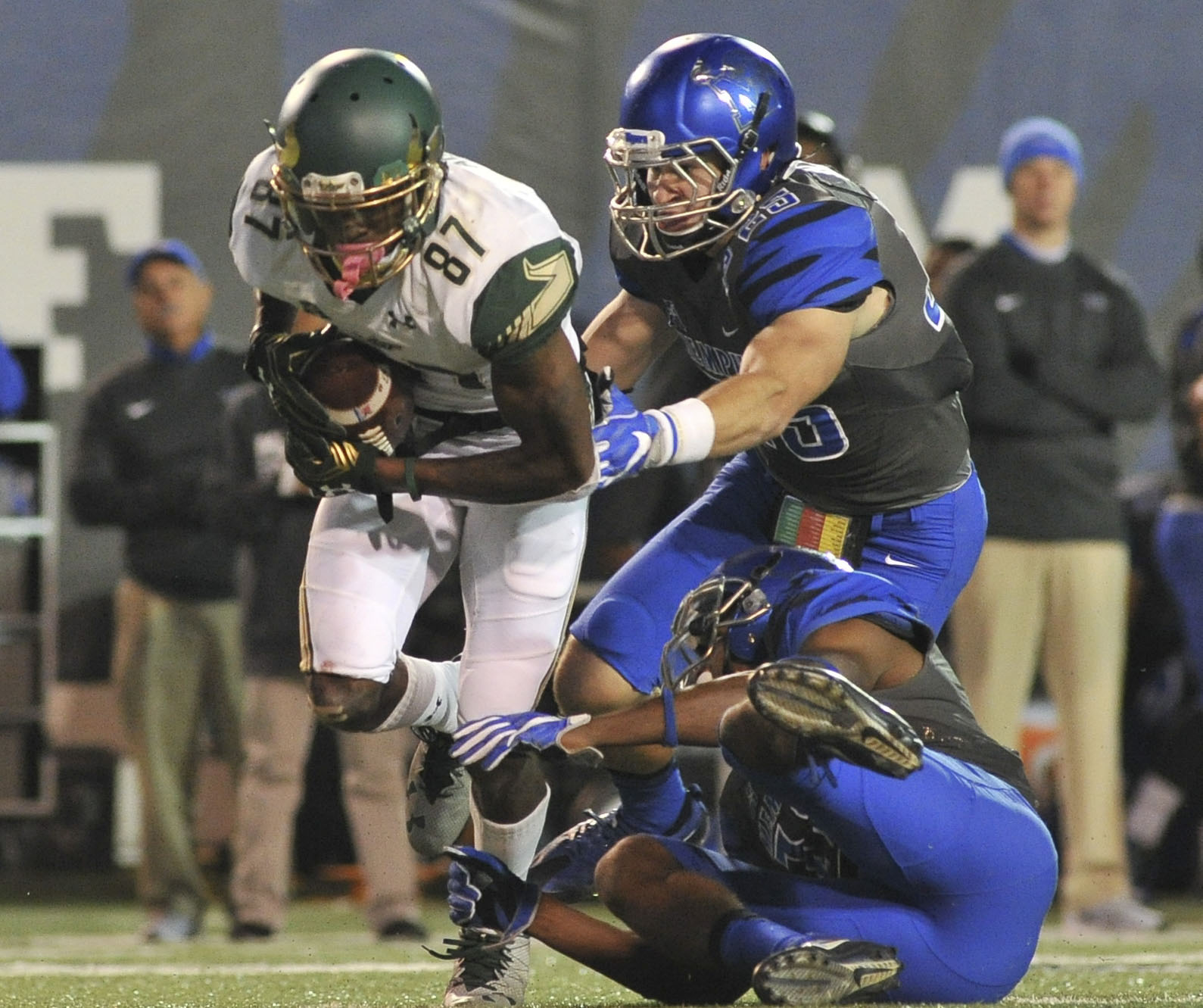 In two years of AAC title games, Temple has made it twice, and Houston and Navy have each made it once. In 2017, we could have two more first-timers facing off.

After a sudden 27 wins in three years, the Tigers still look like they’re just getting started.

If Charlie Strong had this roster at Texas, he'd still be there.

All three of these programs have changed coaches in the last 18 months, but maybe the second-year effect gives Mike Norvell’s Memphis the edge over Charlie Strong’s USF and Major Applewhite’s Houston.

This does feel like Memphis’ time to me. The Tigers were a little bit unstable last year, but their combination of experience and upside might be the best in the conference. The secondary has question marks, but I think I like the answers, and the offense could be dynamite.

USF and Houston are obvious challengers, however. Assuming each new coaching staff clicks well with its personnel (never a given), either could make big runs.

The Owls might win only seven games this year, and that’s disappointing? Times have changed

There is no set of expectations Ken Niumatalolo's Midshipmen won’t defy.

If this offense is truly plug-and-play, big things might be coming.

These three teams could also make runs, but I feel slightly less confident. Temple’s got a lot of new defensive pieces to break in in Geoff Collins’ first season, Navy’s bend-don’t-break was far too bendy last year, and Tulsa’s defense is ... optional. Regardless, these teams are at worst a step or so behind those in Tier 1. If any made a run, it wouldn’t be particularly surprising.

Hiring Chad Morris made perfect sense. Three straight years of improvement would be an achievement.

A run from either of these teams would be a little bit surprising, but it’s not out of the realm of possibility. Chad Morris has offensive pieces assembled in his third year, and if UCF’s offense improves more than its defense regresses, Scott Frost’s UCF could be East contenders. But they have more question marks than the teams above them at this stage.

Luke Fickell is Mr. Ohio, but can he make the Bearcats national again?

ECU's sudden revamp didn't go as poorly as it looked, and there's reason for 2017 hope.

Willie Fritz has a promising trend, but unfortunately, so does almost everything else about this program.

How the Huskies' throwback hire of Randy Edsall can work ... eventually.

At least one of these four teams is going to surprise us (in a good way) this year. They’re starting down here because they have more questions than everybody else, but at least one will come up with answers. This is an exciting, deep conference in 2017 because the bottom of the league is more high-end than it has been of late.

Here’s how my statistical system has the AAC laid out for 2017, with 0 equating to an average FBS team. (You can find full 2017 S&P+ projections here.) 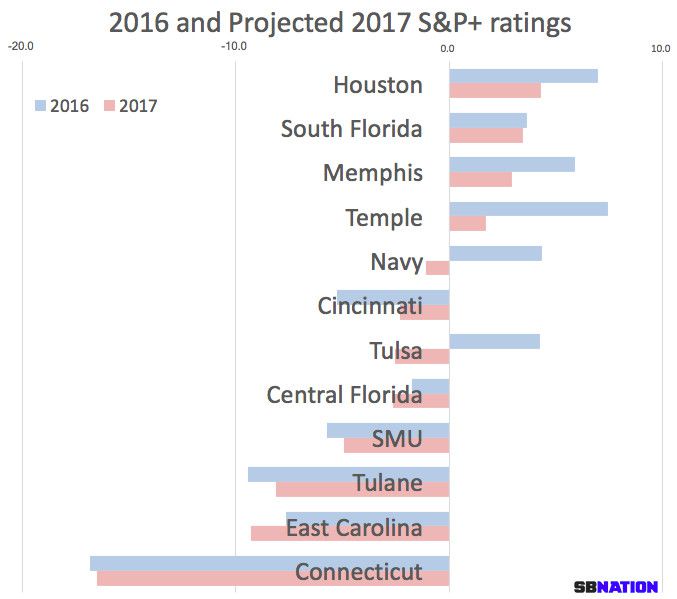 There’s a bit more of a spread here, but you’ve still got four teams within 1.3 projected wins of the lead. Parity (and points), thy name is AAC. 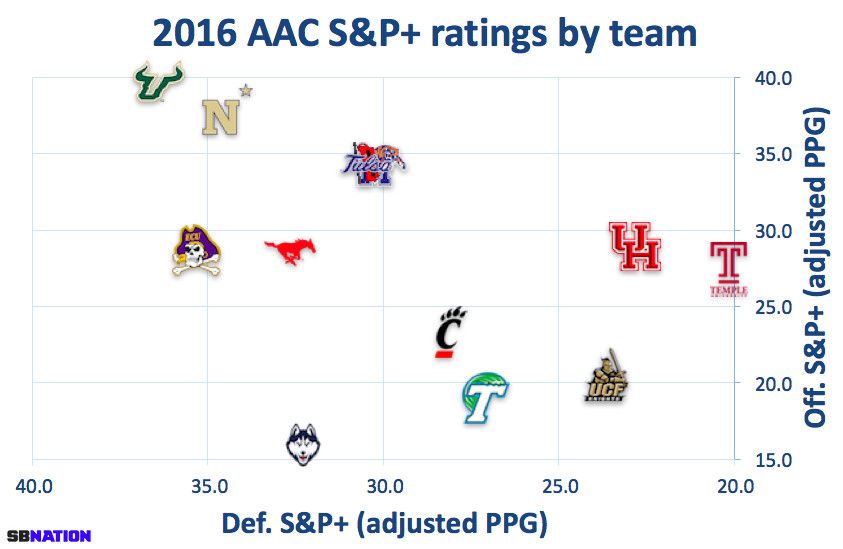 Few teams were good at both offense and defense in 2016; Temple and Houston came the closest to pulling off that balance, while USF, Navy, and Tulsa games were shootouts (and Tulane and UCF games very much were not). 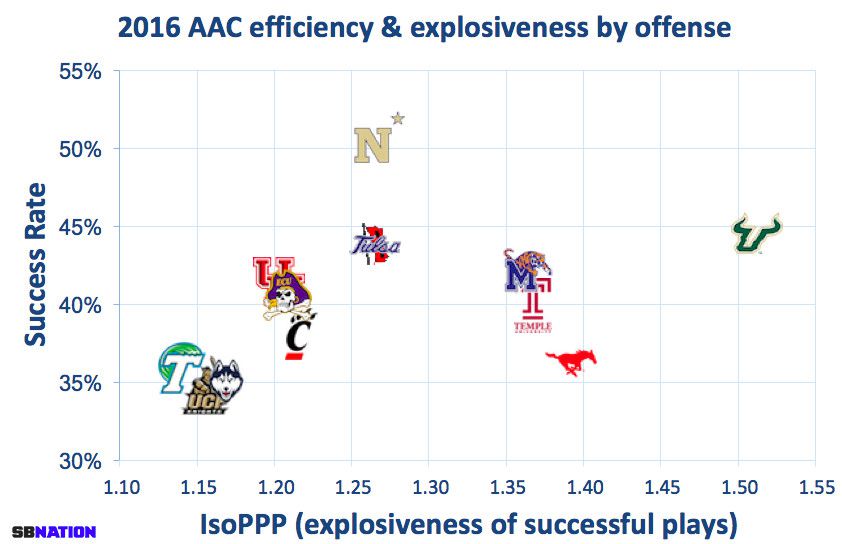 The range on the chart above is huge because of two outliers: USF’s big-play numbers were off the charts, and despite quarterback injury issues, Navy’s efficiency was as ridiculous as ever.

As with many conferences, it’s hard to get a good read on offensive lines because so many of last year’s all-conference guys were seniors. But it seems like every team has a thrilling running back or receiver to lean on. And USF has the quarterback Charlie Strong wishes he had at Texas. 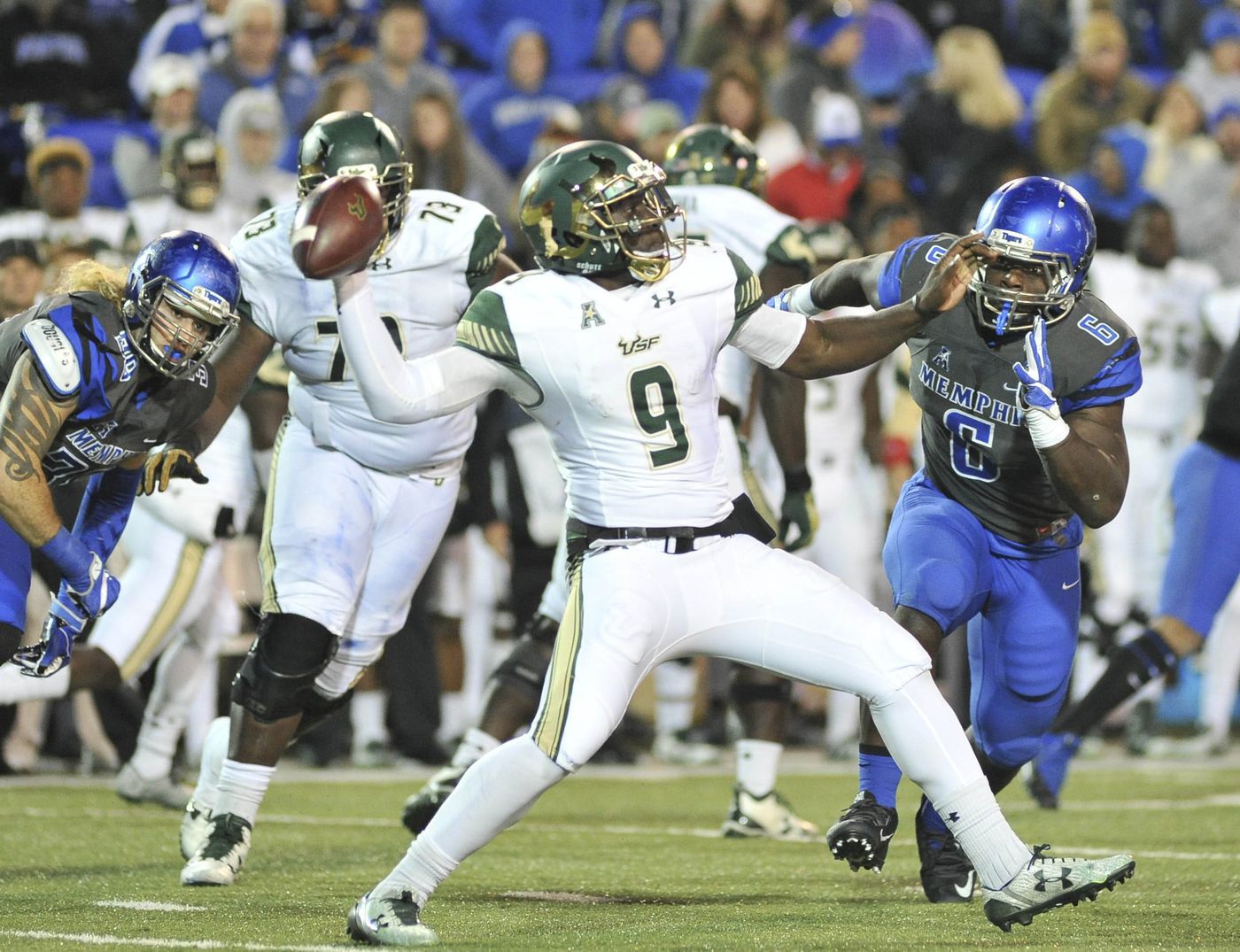 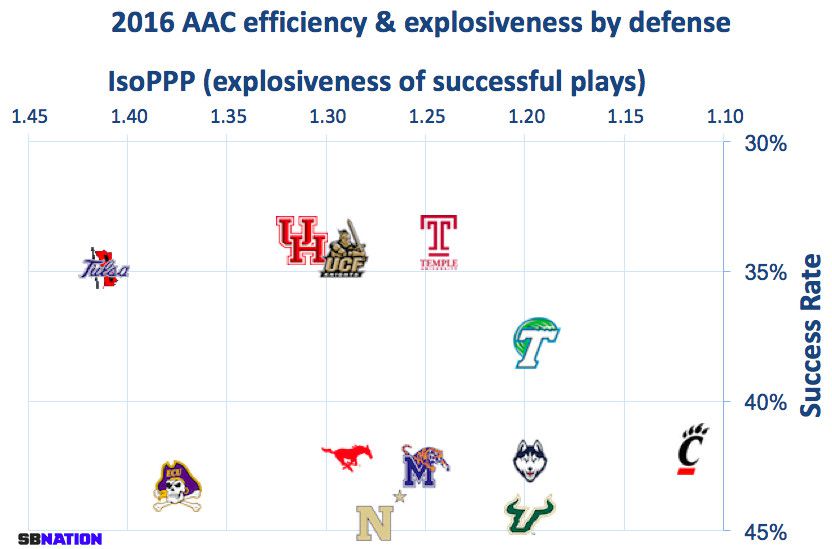 You had a little bit of everything from AAC defenses last year — extreme bend-don’t-break units (Cincinnati, USF, UConn), all-or-nothing attacks (Tulsa), and everything in between. Temple’s was the best overall, but with a retooled front seven and new coaching, we’ll see if the Owls can stay out front.

Rarely do blue-chippers so immediately live up to all expectations like Ed Oliver did for Houston last year. With him slicing up the interior of opposing offensive lines for the next two years, the Cougars will struggle to not have one of the best 1-2 defenses in the conference. The questions for Houston in 2017 reside on the offensive side of the ball. 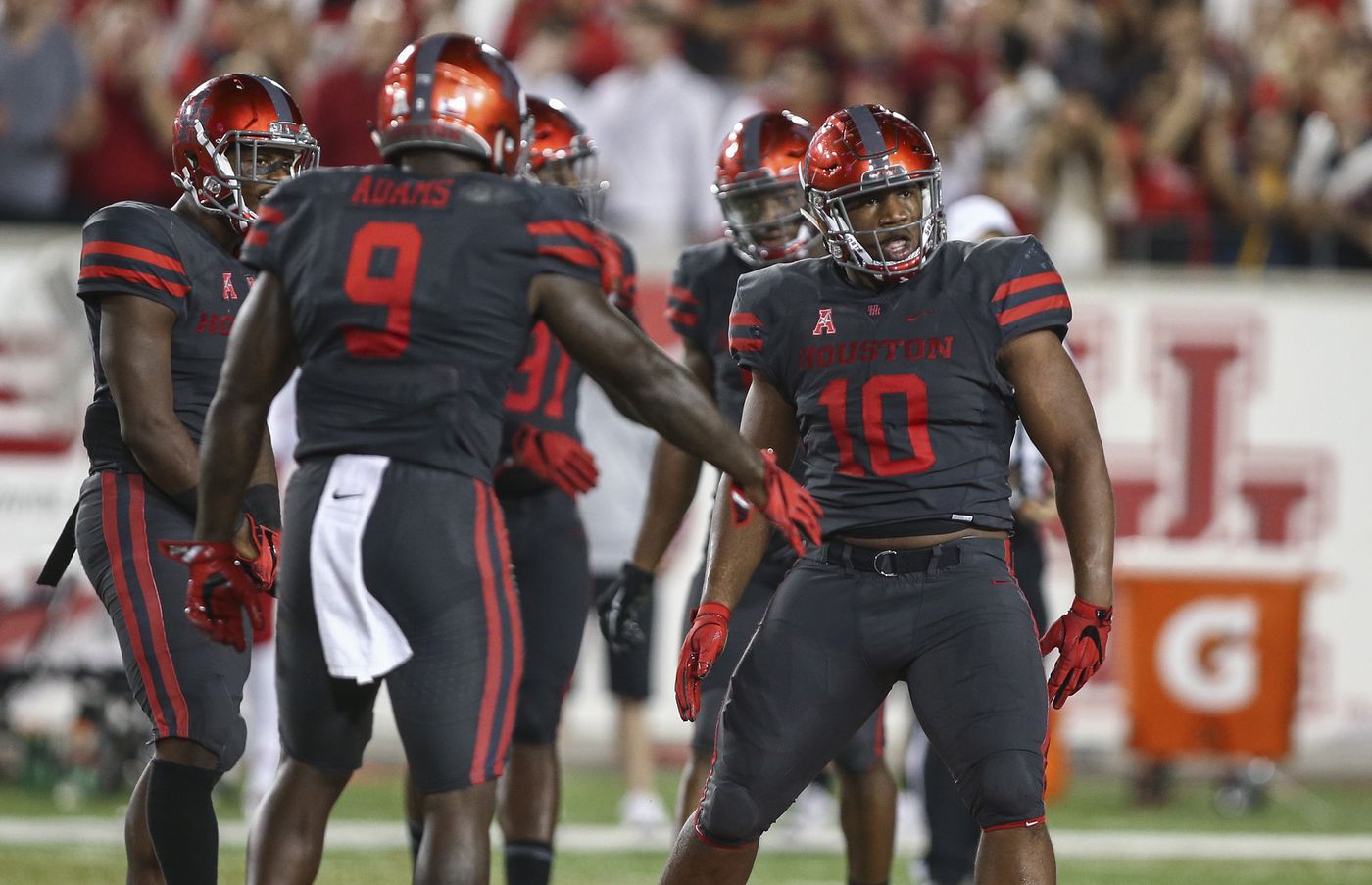